Mazda wows in Tokyo with a pair of stunning concepts

Mazda has indicated its intention to broaden the marque’s appeal with the reveal of an Aston Martin-opposing GT sports car at the Tokyo Motor Show.

If it makes it to the the Japanese manufacturer’s assembly lines it could go up against the famed British marque and its Rapide grand tourer, Porsche’s Panamera and the Maserati Quattroporte.

No performance information has been disclosed about the car as yet, and rumours suggesting that the Vision will be powered by a new rotary engine have yet to be confirmed by the car maker.

In fact, there’s more chance the svelte tourer will adopt one of Mazda’s forthcoming Skyactiv-X engines due to debut in 2019, some of which will be performance-enhancing hybrids that are designed to reduce 0-to-62mph times than carbon dioxide emissions.

It certainly looks the part against its roomy luxury rivals, which also include the all-new Audi A7 and soon-to-be-launched Mercedes-Benz CLS.

It epitomises sleek grace, with indents and creases in the bodywork removed to create a long, smooth design. 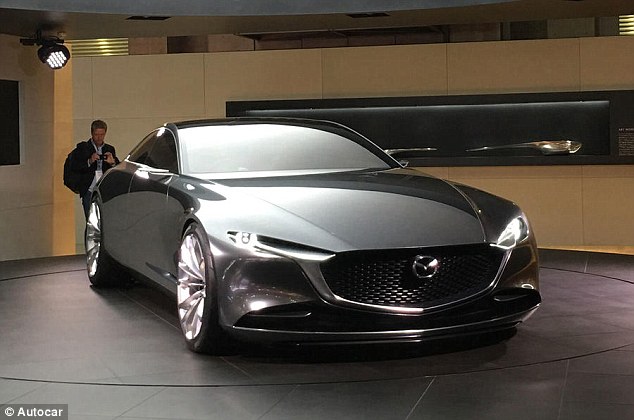 The sleek design omits any curves, creases, indents and vents from the bodywork to create a bullet-like smooth shape 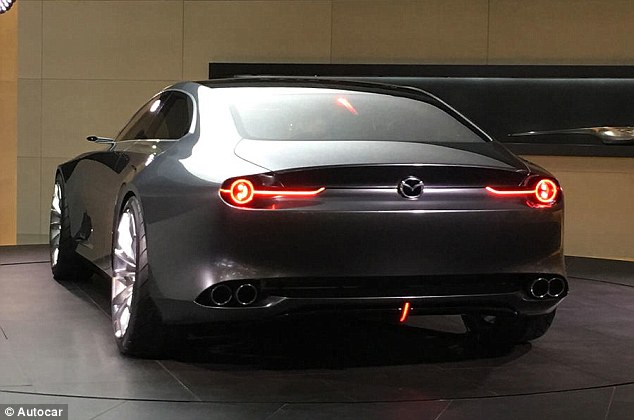 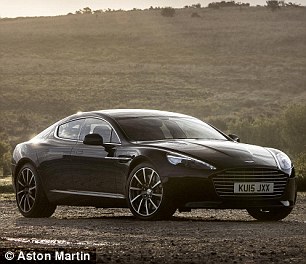 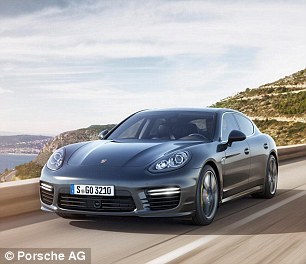 Despite the clean styling it still looks purposeful, with a hunched shoulderline, flared arches and no less than four exhausts.

The fuss-free design language is also expressed in the cabin, with an interactive touch-sensitive centre console the only distraction from the minimalist interior. 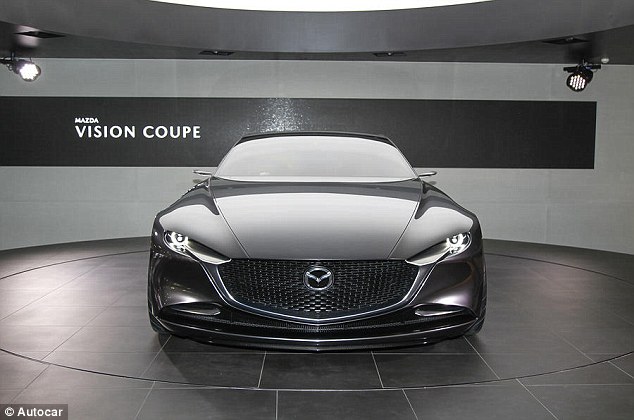 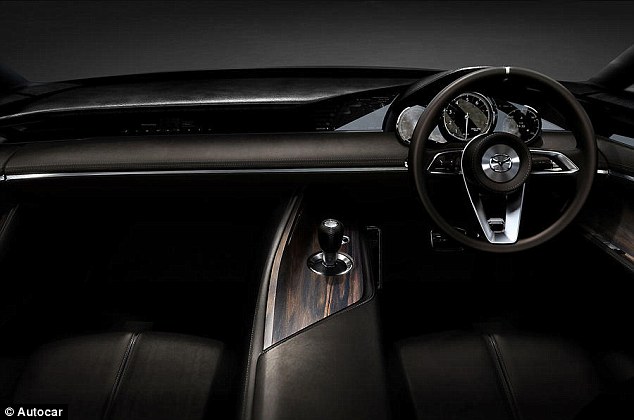 Will we see the Vision come to fruition? If there was a good reason to launch a crown-stopping sports car like this, 2020 would be it – that’s when Mazda will be celebrating its centenary.

The Vision Coupé wasn’t the only for-the-future car Mazda teased in the Japanese capital this week. 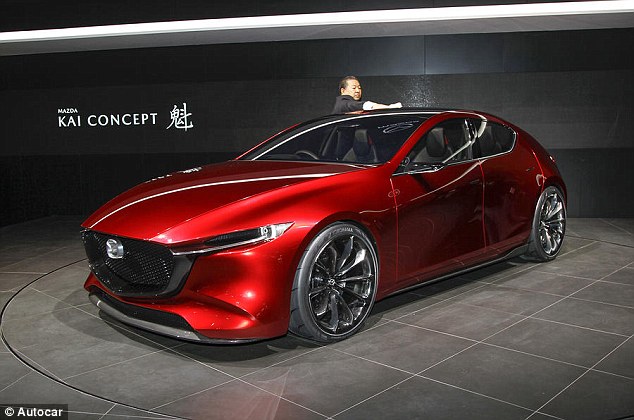 The 2019 family hatch: This is the Mazda Kai concept – a car that previews the upcoming 3 hatchback 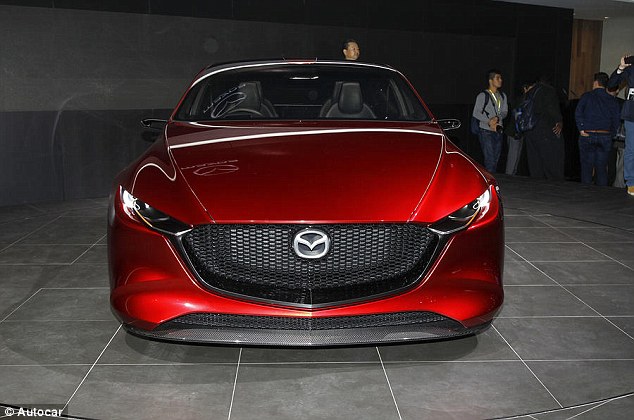 Plenty of styling cues have been passed from the Vision Coupé, though in a more practical package 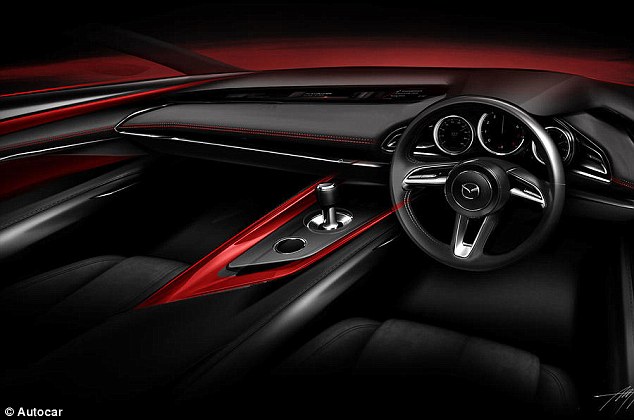 Like the Vision Coupé, the interior is minimalist but does feature a traditional instrument cluster and a floating centre console

The striking new Kai concept previewed the next ‘3’ family car for 2019 – a model it hopes could steal sales from the Volkswagen Golf when it arrives on the market.

Confirming its hatchback format, the concept is bigger in length, width and wheelbase than the current model, but not as tall.

The concept is powered by one of the company’s Skyactiv-X petrol engine, which aims to deliver the efficiency and low-rpm torque advantages of a diesel powerplant with the free-revving power characteristics of a conventional petrol unit. 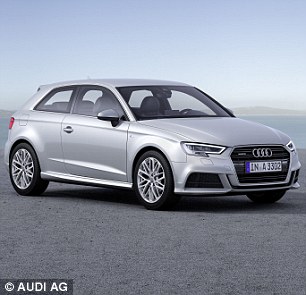 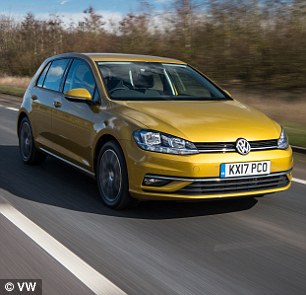 The new Mazda 3 is due in 2019. When it arrives it will look to steal sales from premium-branded family cars like the Audi A3 (left) and VW Golf (right) 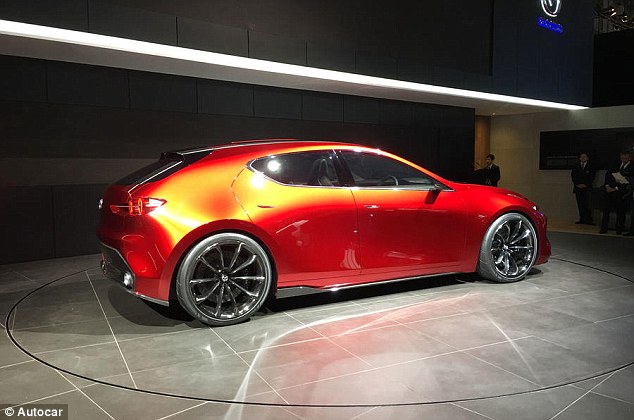 Under the bright lights of the Tokyo Motor Show, the Mazda Kai concept looks spectacular 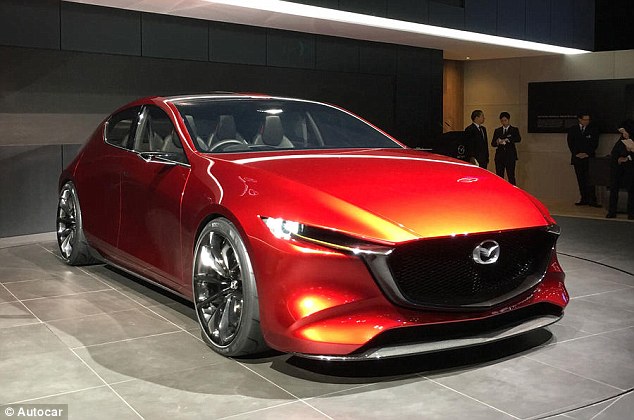 Many of the features are likely to make it to production, including the option of 20-inch wheels. The letterbox-size wing mirrors probably won’t be used 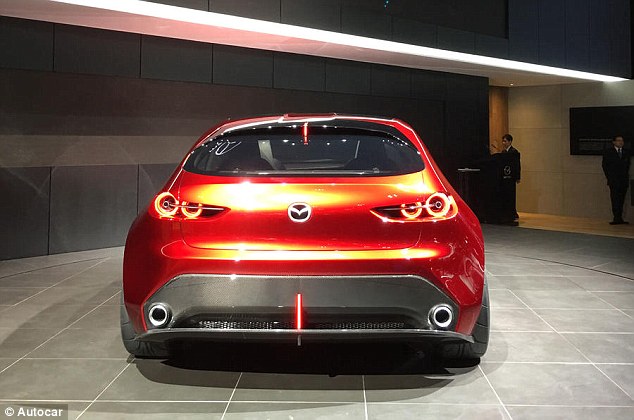 In terms of looks, the Kai (which stands for ‘pioneer’) features the Ferrari GTC4 Lusso-like double-circle tail-lights that are separated by a chrome strip – features that is destined to find their way in Mazda’s next-generation styling.

The four-seat layout of the concept is expected to change to five seats in the 2019 production car, but the front-engined, front-wheel-drive set-up will stay.

Even the 20-inch alloy wheels previewed on the concept car could make it to the showroom-ready car in two year’s time.