Maze Runner author, James Dashner, has been accused of sexual harassment, and dropped by his literary agent.

The Young Adult author was accused publicly in comments left this week on the website of School Library Journal, which is a monthly magazine for librarians.

The anonymous comments, which also accused Jay Asher, the author of 13 Reasons Why, of sexual misconduct, were posted on an article concerning alleged sexual misconduct involving a former board member at the Society of Children’s Book Writers and Illustrators’ (SCBWI).

The article was originally published on January 3.

‘I couldn’t in good conscience continue working with James, and I let him go yesterday,’ his agent, Michael W. Bourret, told the Associated Press on Wednesday.

Asher has also been dropped by his agent, and is no longer a member of the SCBWI.

Maze Runner author, James Dashner, has been accused of sexual harassment, and dropped by his literary agent; Dashner has not commented on the allegations

A detailed description of allegations against Dashner came on Sunday at 6.01 pm.

‘I would like to clarify that the harassment/abuse from James Dashner was not a one-time unwanted touch or a joke I took the wrong way. It entailed months of manipulation, grooming and gaslighting. He offered to be my “mentor” using praise and flattery of my writing, and promises to use his connections to help elevate my career to the level of his. But it was all a bait and switch. When I made it clear that I was not going to give him what he wanted in return, our “mentorship” relationship ended.,’ the person wrote.

‘It took me a long time to realize that every move he made was carefully calculated. He has his manipulation down to a science. I realize now that I was not the first to fall for his tricks, and I was not the last. I feel deeply sorry for everyone who fell for his manipulations after me. I’ve tried to nudge others and warn on the so-called “whisper network” but I have always worried that talking about it publicly would harm my career or family. Even typing this is making me sweat buckets. Thanks for listening.’ 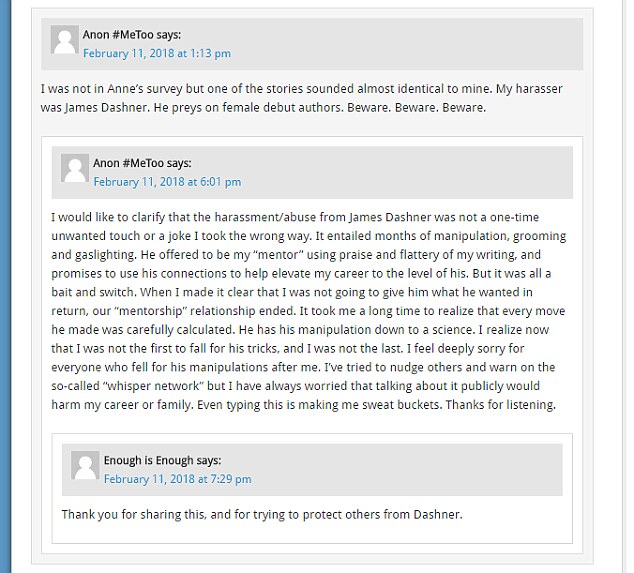 An anonymous accuser said Dashner engaged in ‘months of manipulation, grooming and gaslighting’ at their expense

Many of the comments naming Dashner and Asher mentioned a Medium article written by Anne Ursu, a fantasy writer, where she included a link to a survey she started in December on sexual harassment in children’s book publishing.

Her survey showed 90 respondents as of 1.15 pm Eastern on Thursday.

‘I am collecting data on sexual harassment in the children’s/YA publishing to get a handle on the scope of the problem. If you have experienced sexual harassment within the industry (or at an industry event), please share your story below,’ she wrote.

‘Please do not use names anywhere, and answer only the questions you wish to answer. The responses themselves may be made public in some form, and may be used in an article/essay.’ 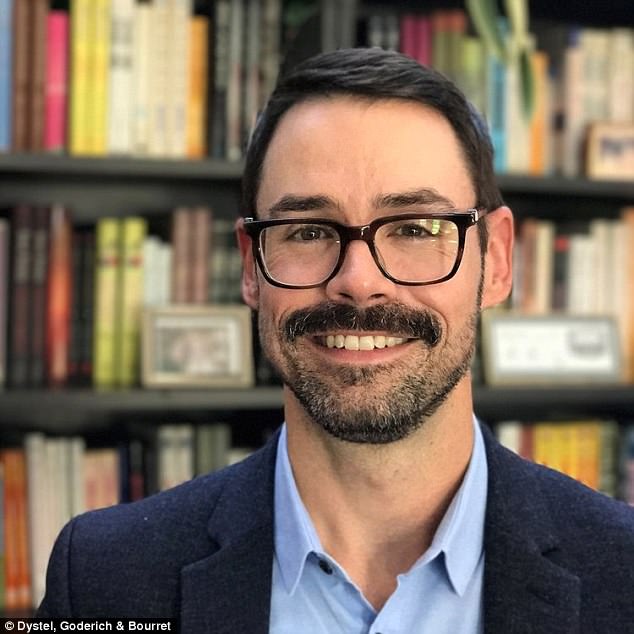 ‘I couldn’t in good conscience continue working with James, and I let him go yesterday,’ his agent, Michael W. Bourret (pictured), told the Associated Press on Wednesday 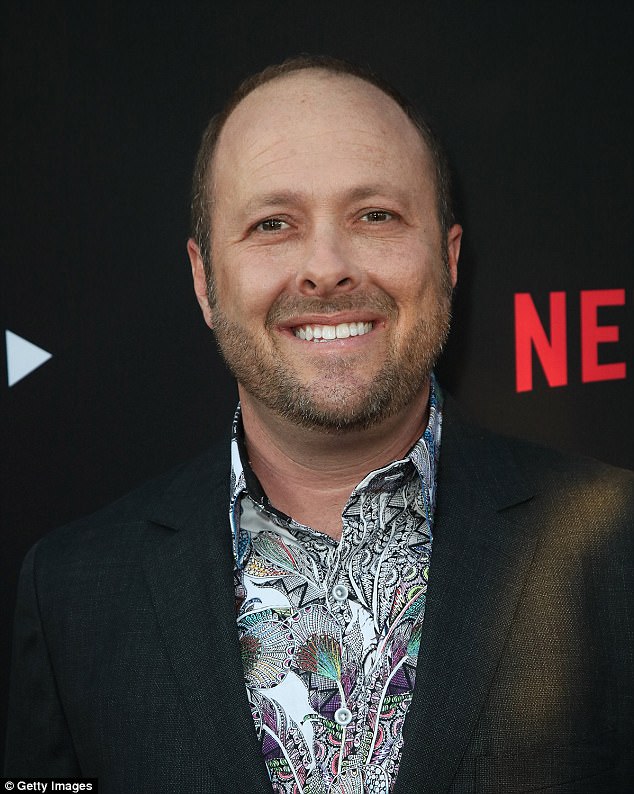 The anonymous comments also accused Jay Asher, author of 13 Reasons Why, of sexual misconduct; Asher has denied the allegations 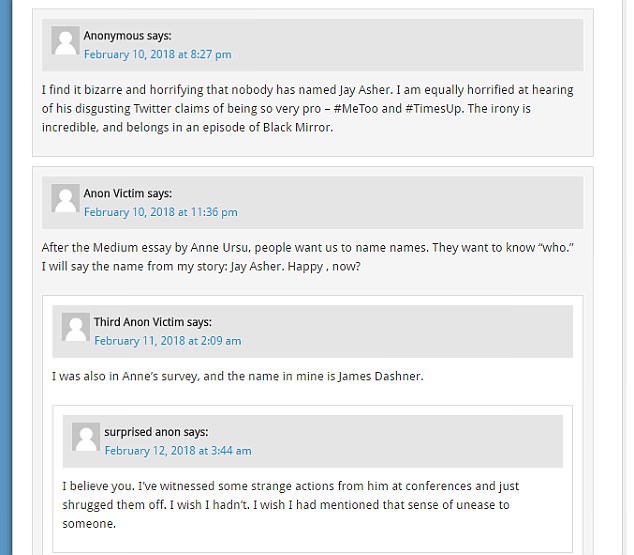 In the comments of the School Library Journal post, people started saying the felt compelled to come forward with more information, and started naming names

Then, in the comments of the School Library Journal post, people started saying the felt compelled to come forward with more information.

The first post came on Saturday, at 11.36 pm Eastern by a person listed as ‘Anon Victim.’

‘After the Medium essay by Anne Ursu, people want us to name names,’ the person wrote. ‘They want to know “who.” I will say the name from my story: Jay Asher. Happy, now?’

It didn’t take long for more people to add names to the story.

‘I was also in Anne’s survey, and the name in mine is James Dashner,’ a person who identified themselves as ‘Third Anon Victim’ wrote, on Sunday at 2.09 am.

‘I would also like to add that James Dashner was the man in my story in Anne’s survey.’ 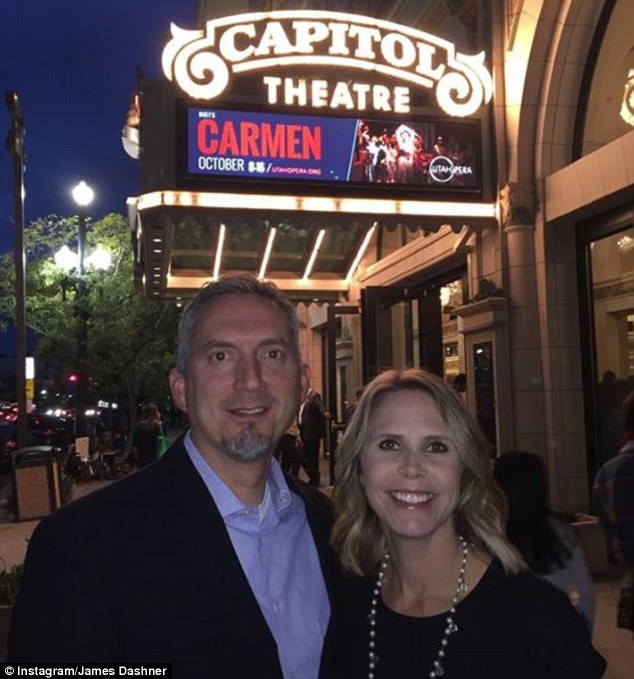 Dashner is seen here with his wife, Lynette Anderson, who he is been married to since 1998

Less than an hour later, another person posting as ‘Anon’ added: ‘I was not in Anne’s article, but I have been harassed by James Dashner.’

A person who identified themself as Adria Quinones offered support and thanking for who had been coming forward, writing:

‘SCBWI conferences are places where harassment can readily flourish, given the power differential between people with standing in the industry and those looking to enter it. And then there’s all that alcohol-fueled socializing.

‘I hope SCBWI comes up with a better reporting mechanism, as well as a zero-tolerance policy.’ 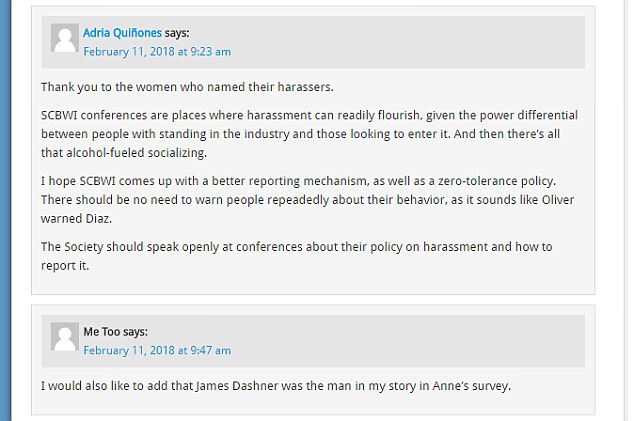 ‘I hope SCBWI comes up with a better reporting mechanism, as well as a zero-tolerance policy’ wrote a supporter who identified themselves as Adria Quinones

But not everyone was so accepting of the posts being made under pseudonyms. Ironically, expliciti criticism came from at least one individual, who chose to comment under the assumed name of ‘This is insanity!’

‘Hey, why don’t you stop hiding behind anom and speak your truth, starting with your name. Why are we at the point where anyone can say anything about anybody and we are suppose to believe them. Why is slander okay when it is ruining people’s lives and careers because of what comes out of your mouth. Let’s see the proof, let’s see the texts, anything. Prove it or shut the f*** up,’ the person  wrote, on Wednesday at 9.08 pm.

‘How do we know you aren’t just pissed because you feel inadequate about your own writing career and want to get back at certain people. Why are we allowing this? And I agree, this kind of baseless accusation is going to set women back, not help them. If you have the balls to name names, then name your own!’

Before that critique was published, another anonymous individual vouched for those claim harassment.

‘I have not been personally harassed by him, but I’ve now heard four firsthand accounts, and one secondhand account, about James Dashner,’ someone wrote on Sunday at 12.26 pm.

‘I know him well, and have for ten years—long before he was famous—and I believe every one of the complaints about him.’

Another anonymous individual vouched for claims of harassment against Dashner 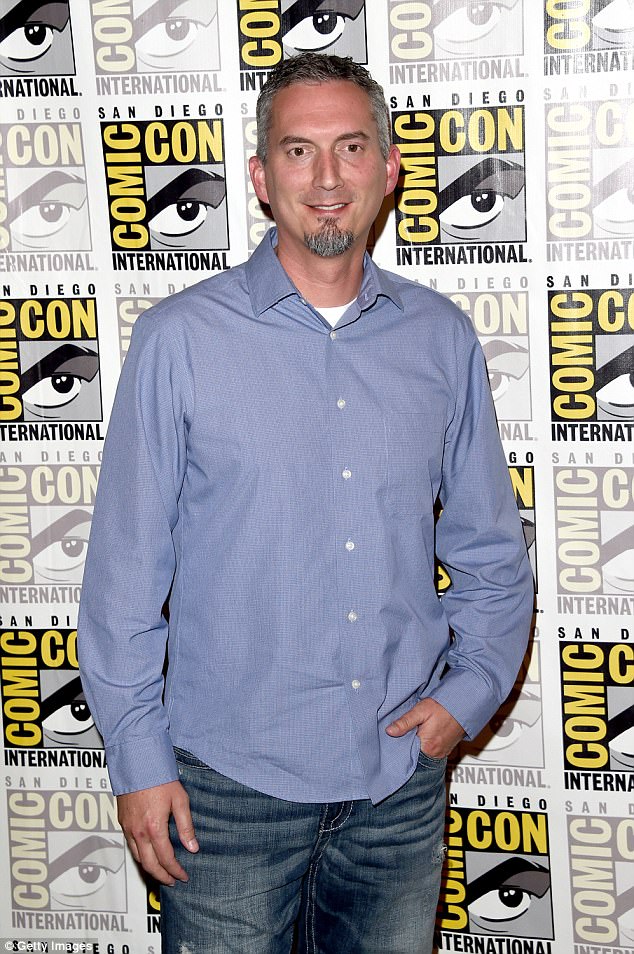 Dashner is seen here at the 20th Century Fox press room during Comic-Con International 2015 at the Hilton Bayfront on July 11, 2015 in San Diego

Asher, who SCBWI executive director Lin Olivertold the AP has been expelled from the organization, was also named in the comments on the post.

‘When I discovered his true nature, I cut off all communication and tried to warn other women through the whisper network. He found out and used threats and intimidation to quiet me. Well, Mr. Asher, the intimidation stops NOW. We will no longer whisper. ‘

Oliver said that Asher had violated the society’s harassment code.

Jay Asher, who SCBWI executive director Lin Olivertold the AP has been expelled from the organization ,has been accused of harassment and intimidation

Asher, however, has said he chose to leave the children’s writers society and was himself a victim of harassment. In an email to the AP, the married author acknowledged having affairs with what he called ‘consenting adults.’

Netflix meanwhile confirmed to Entertainment Weekly he will not be involved in the second season of the television series, 13 Reasons Why.

Asher’s agent has also dropped him, a spokesperson confirmed.

‘Mr. Asher is no longer working with the Andrea Brown agency,’ the spokesperson, Tammy Taylor, wrote in an email to The AP.

‘He respects and understands their position, given the current climate.’

The movie adaptation of Dashner’s book, Maze Runner: The Death Cure, premiered in theaters less than a month ago on January 28.

Dashner has been working on an adult book, called The Waking, his publisher Random House said in 2017.

It’s not clear at this time whether that work will be affected.

Random House was not immediately available to provide a comment.

Dashner has not publicly commented on the allegations. He has been married to Lynette Anderson since 1998. 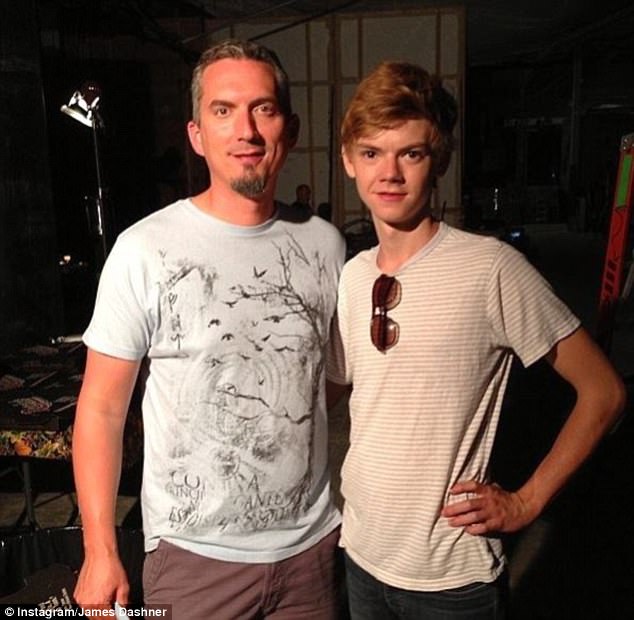 Dashner is seen here with actor Thomas Brodie-Sangster, who stars in Maze Runner: The Death Cure