White House press secretary Kayleigh McEnany said the HHS whistleblower, Dr. Rick Bright, should ‘show up for the job he has,’ after he testifed to Congress that hypertension and stress have kept him out of work since his controversial demotion.

‘He takes a $285,000 salary – that’s extraordinary for a federal government salary – and he is still on taxpayer-funded medical leave so he can work with partisan attorneys who malign the president,’ McEnany said at Friday’s press briefing.

President Trump had previously asserted that Bright – who warned Congress that the U.S. could be in for its ‘darkest winter’ if the administration didn’t improve its response to the coronavirus pandemic – should be canned.

Press secretary Kayleigh McEnany was asked if the administration wanted to see HHS whistleblower Dr. Rick Bright return to work at his new position at the National Institutes of Health. McEnany replied that he should ‘show up for the job he has’ 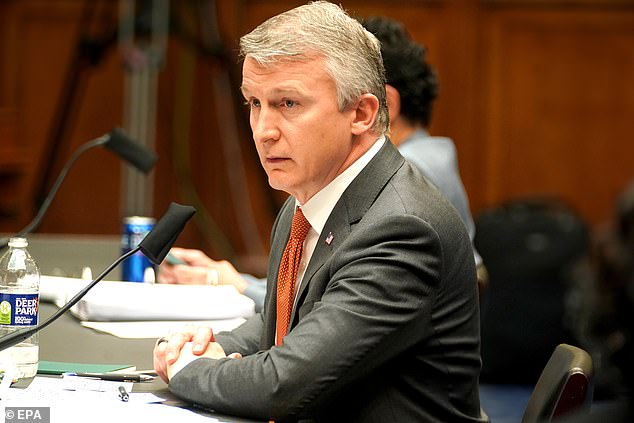 Dr. Rick Bright testifed before Congress Thursday, warning the U.S. could see its ‘darkest winter’ if the Trump administration didn’t improve its coronavirus response. He also said he hadn’t returned to work since his controversial demotion due to hypertension and stress

Bright had previously led the Biomedical Advanced Research and Development Authority, but on April 21 was moved to an undefined role at the National Institutes of Health.

An HHS press release at the time and McEnany on Friday characterized suggested that the transition was a standard job chance.

Bright suggested what had happened was more sinister.

He told Congress that he was immediately locked out of his BARDA email upon being informed of the move.

He said he suspected he was demoted over his resistance to widely approve the use of the Trump-touted anti-malaria drugs hydroxychloroquine and chloroquine to treat COVID-19 symptoms.

‘I believe part of the removal process for me was initiated because of a push back that I gave when they asked me to put in place an expanded access protocol that would make chloroquine more freely available to Americans that were not under the close supervision of a physician and may not even be confirmed to be infected with the coronavirus,’ Bright said.

Katz did not respond to DailyMail.com’s request for comment on McEnany’s remarks.

Bright hasn’t started at NIH, telling lawmakers that he was first out on medical leave and then took vacation time to testify before Congress. 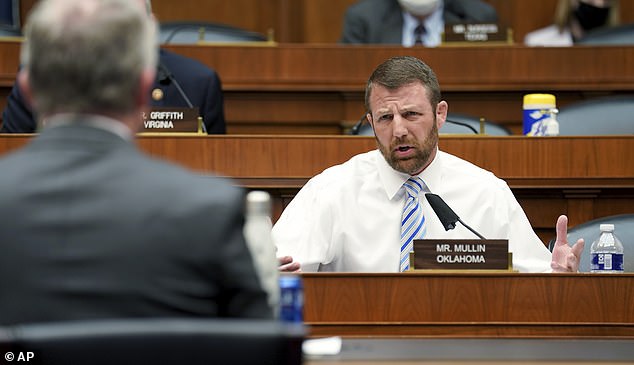 Rep. Markwayne Mullin, an Oklahoma Republican, said he was ‘confused’ how Dr. Rick Bright could testify before Congress, but not show up to his new position at NIH. Bright testified that he’s been battling hypertension and stress since losing his job leading BARDA

‘I had a conversation with my physician about my hypertension and we’ve been managing it over the last three weeks because this has been very stressful to be removed suddenly without explanation for my role and my position. It’s a life change for me,’ Bright said.

Rep. Markwayne Mullin, an Oklahoma Republican, challenged Bright on how he could be out on sick leave, yet sit before Congress.

‘I guess I’m kind of confused here because you say you have hypertension but yet you were able to do these interviews, you were able to make the report and you were able to prepare for this hearing,’ Mullin said. ‘Yet you’re too sick to go into work, but you’re well enough to come here, while you’re still getting paid by the United States government.’

When Mullin asked him why his hypertension was acting up now and not when he was in charge of BARDA, Bright responded, ‘I didn’t have the level of stress of being removed from my position while I was at BARDA sir.

‘This has been very stressful,’ the doctor added.