The woman at the centre of the UK’s first McMafia order spent up to £15.5 million of embezzled cash in luxury boutiques, hotels, restaurants and grand department stores across Europe, a court has heard.

Zamira Hajiyeva, 55, is also said to have bought jewellery, gold and flight tickets for herself and family members, paid school fees for her three children and splashed out on health and beauty treatments.

Last month it was revealed how she spent £16 million over a decade at Harrods.

Mrs Hajiyeva is alleged to have been a member of an ‘organised criminal group’ of 37 people involved in embezzling 97 million US dollars (£76 million) from the International Bank of Azerbaijan (IBA) between 2009 and 2015.

Her husband, Jahangir Hajiyev, 57, was the chairman of the state-controlled bank from 2001 until his resignation in 2015 before he was subsequently sentenced to 15 years in prison for fraud and embezzlement.

Mrs Hajiyeva is fighting extradition to Azerbaijan at Westminster Magistrates’ Court in relation to the same allegations, claiming she is being persecuted for her political beliefs and will not get a fair trial. 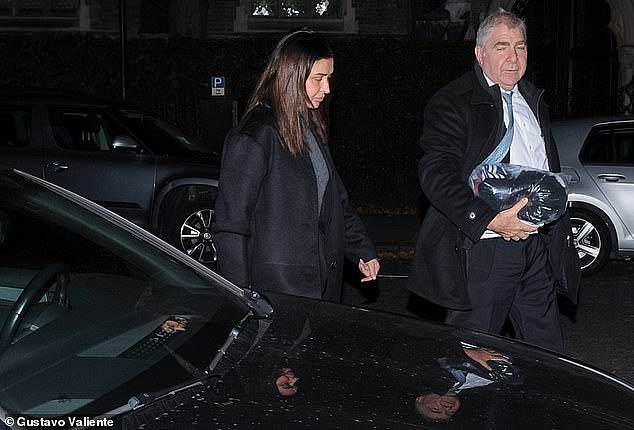 Mrs Hajiyeva, pictured left in Knightsbridge last November, is said to have bought jewellery, gold and flight tickets for herself and family members, paid school fees for her three children and splashed out on health and beauty treatments 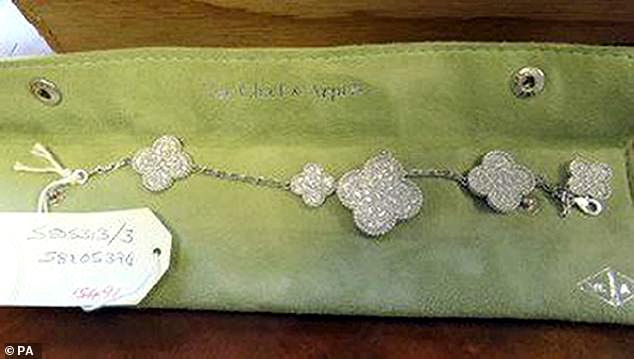 A Magic Alhambra bracelet made by French jeweller Van Cleef & Arpels that was bought for Mrs Hajiyeva by her husband for nearly £300,000 in San Moritz in 2008. It has since been valued at just £20,000. It has now been seized by the National Crime Agency (NCA) 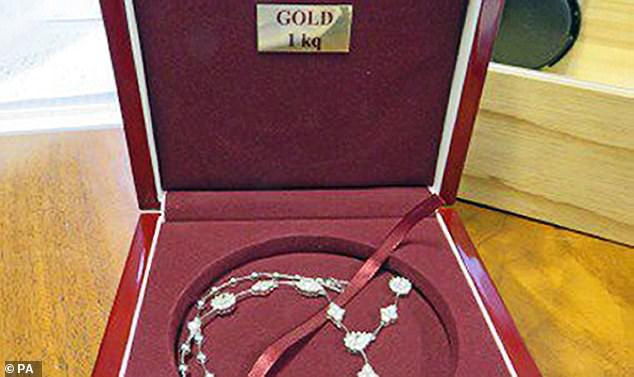 A diamond cluster and bar necklace, right, worth about £6,000 has also been seized by the NCA 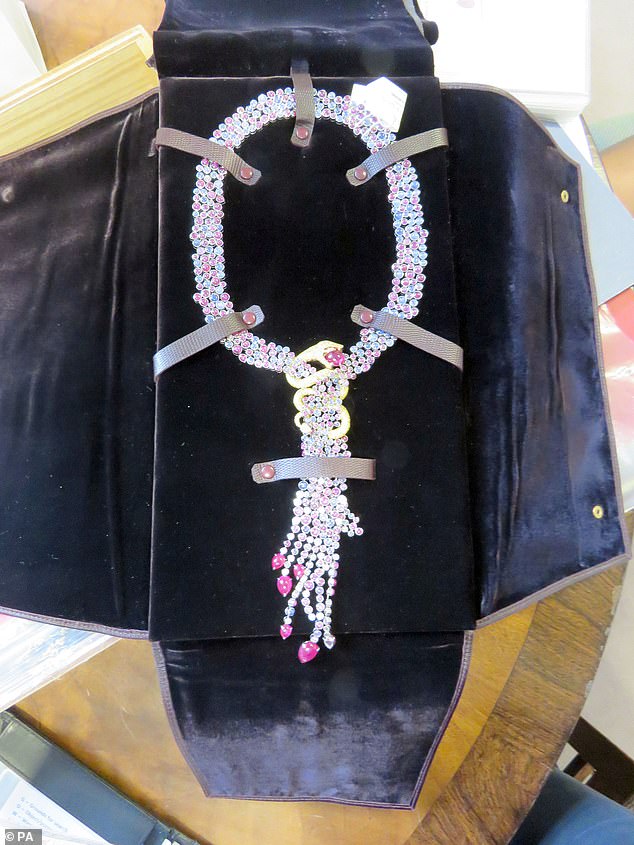 a £120,000 Boucheron sapphire and ruby serpent pendant that has been seized by the NCA 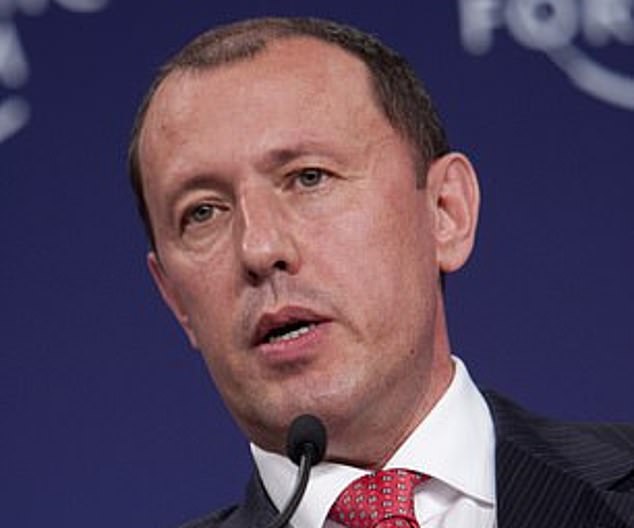 Her husband, Jahangir Hajiyev, 57, (pictured) was the chairman of the state-controlled bank from 2001 until his resignation in 2015 before he was subsequently sentenced to 15 years in prison for fraud and embezzlement

She told the court between £14.5 million and £15.5 million was spent on 10 credit cards issued in Mrs Hajiyeva’s name, while others were in the name of her stepdaughter and her husband’s personal bodyguard.

‘Mr Hajiyev was sentenced to 15 years’ imprisonment and was ordered to repay 39 million dollars (30.5 million). There has been an appeal in relation to that, which was refused,’ Ms Malcolm said.

‘I have updated the sums of money in relation to Mrs Hajiyeva. The difficulty is, she withdrew sums, partly in Azerbaijan, both from ATMs and in cash, and partly through a number of luxury boutiques, hotels, restaurants and what are described as grand department stores, which I imagine is a reference to Harrods and others, where she spent money in US dollars, pounds and euros in different parts of Europe.’

The ‘unexplained wealth order’ was introduced in January this year to help officials identify and seize British property suspected of being bought by dirty money laundered by corrupt foreign criminals.

A UWO is an investigation order issued by the High Court on satisfaction of a number of tests.

A UWO requires a person who is reasonably suspected of involvement in, or of being connected to a person involved in, serious crime to explain the nature and extent of their interest in particular property, and to explain how the property was obtained.

A UWO can also be applied to politicians or officials from outside the European Economic Area, or those associated with them i.e. Politically Exposed Persons.

Agencies which can apply for a UWO include: the National Crime Agency, Her Majesty’s Revenue and Customs, the Financial Conduct Authority, the Serious Fraud Office, or the Crown Prosecution Service.

Ms Malcolm said there is no evidence of any legitimate source of wealth, while his wife is said to have no income and is selling jewellery to fund her lifestyle.

Ms Malcolm said: ‘The case against her is embezzlement and fraud in a conspiracy with her husband.

‘The conduct in this country amounts, in our submission, to either money laundering the proceeds of that fraud, or she is the beneficiary of the fraud, (or) she is complicit in the fraud – so conspiracy to defraud or conspiracy to steal.’

In separate proceedings, two Unexplained Wealth Orders (UWOs) have been granted against Mrs Hajiyeva as a High Court judge found she spent more than £16 million in Harrods between September 2006 and June 2016.

She was targeted by the National Crime Agency (NCA) when so-called McMafia anti-corruption laws came into force last year.

UK authorities want to know how she and her husband could afford to buy an £11.5 million Knightsbridge house a few minutes’ walk from Harrods and a £10.5 million golf club in Ascot, Berkshire.

When Mrs Hajiyeva unsuccessfully attempted to overturn one of the UWOs in October, her lawyers claimed her husband’s conviction was the result of a ‘show trial’ and that his guilt ‘had been determined by the presidential administration in advance’.

‘The decision of the High Court upholding the grant of an Unexplained Wealth Order against Zamira Hajiyeva does not and should not be taken to imply any wrongdoing, whether on her part or that of her husband,’ they said.

They also said the UWO was part of an investigative process, not a criminal procedure, and did not involve the finding of any criminal offence.

Mrs Hajiyeva has been granted permission to appeal the High Court’s decision by the Court of Appeal.