Me and my operation: The ceramic hip that keeps younger active patients running

Ever since my late 20s, I’ve been a keen runner: I’ve run six marathons in different parts of the world. Then, in my mid-40s, I developed a dull, aching pain in my left groin.

I saw numerous physios and osteopaths, none of whom was able to relieve the pain, which they thought was due to over-working the muscles.

It was incredibly frustrating as, by now, I could only run about six miles, in pain, at a time — before, I was running marathons.

David Brewer, 54, an NHS manager from Stevenage, Hertfordshire, was one of the first patients in the world to have a new alternative to the traditional hip replacement

In 2013, my GP referred me to an orthopaedic specialist, who sent me for scans. These revealed wear and tear in my hip, caused by my intense running. I was diagnosed with osteoarthritis and told that I’d soon need a left hip replacement. I was devastated.

I was forced to stop running because it became so painful, but tried to do all I could to delay surgery.

I started swimming but, within two years, had to give that up, as it hurt too much. I also started limping when I walked.

After looking into it, I concluded that, for my priorities — exercising — hip resurfacing, removing less bone than a total hip replacement and then ‘resurfacing’ the joint using a smaller implant, offered the best option for me, as it meant near-100 per cent mobility.

I was referred to an orthopaedic surgeon at Addenbrooke’s Hospital in Cambridge, but in December 2015, an MRI scan of my left hip found that the ball was just 46 mm — too small for hip resurfacing.

I was then referred to Professor Justin Cobb at Charing Cross Hospital, London, an expert in hip resurfacing procedures.

When I saw him, in December 2016, he was about to start a clinical trial of a new ceramic resurfacing implant designed for active people and suitable for small hips. It sounded like the perfect option.

I had my operation in September 2017 — it was all over in 90 minutes. I was given a spinal block and a sedative. I could stand on my leg and walk with crutches the next day.

I spent three nights in hospital and, three weeks after the operation, I was walking 5 km in less than 50 minutes. I needed painkillers for two weeks, but wasn’t in any significant pain.

After six weeks, I started swimming and, three months after the operation, I was doing sessions on a cross-trainer.

My new hip feels superb. I look forward to training and racing competitively in the not-too-distant future. 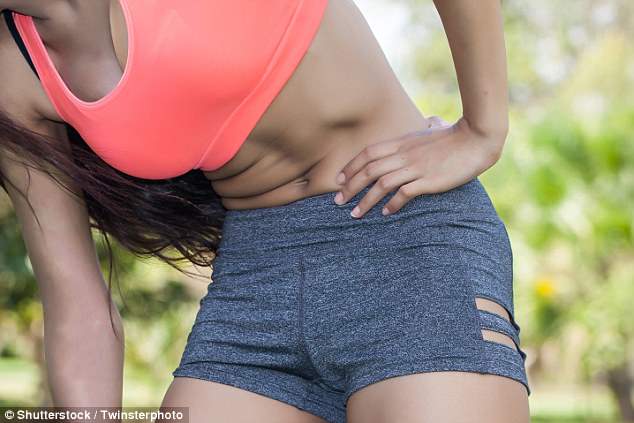 Every year, around 100,000 people in the UK undergo a total hip replacement, where a damaged hip joint is replaced with an artificial one.

The hip joint consists of a ball, the rounded head of the thigh bone, which fits into the rounded socket of the pelvic bone.

But the cartilage can wear away, either through age-related wear and tear or if you are highly active. When this happens, the two bone surfaces rub against each other.

With a hip replacement, the damaged ball of the hip joint is cut off and replaced with an artificial ball on the end of a metal stem that’s pushed inside the thigh bone. The socket is then enlarged by a millimetre or two, removing the damaged cartilage and a thin layer of bone.

A new plastic lining for the socket is then inserted. Inside it, there is a metal shell coated in a rough surface of titanium and hydroxyapatite — the same chemical from which bone is made.

It is a highly successful operation for older patients who suffer from age-related wear and tear.

Patients are walking almost immediately, but using a stick for the first four weeks. But they may take months, or even a year, to return fully to normal activities.

Around 65,000 younger people need hip surgery each year because they are highly active —however, they can find the long, stiff metal stem inserted inside the thigh bone in a replacement restricting, as there’s only so much force you can put through the joint when you have a stiff metal stem without feeling it. This makes high-impact sport such as running painful.

There is also a risk of breaking bones near the metal implant, as it is heavy against the bone.

Hip resurfacing is more conservative. Only a few millimetres of the damaged surfaces of the ball and socket are removed. Implants are then put over what’s left of the ball and into the socket.

Resurfacing is ideal for younger patients because it leaves more of the patient’s hip bone intact, allowing them to be more active.

However, the old hip resurfacings used metal implants — and, over time, this could lead to wear and tear of the implant, leading to metal debris being released and causing swelling and soreness. (Most hip replacements are not metal-on-metal, so don’t have this problem.)

Now, at Imperial, we’re running a trial of a ceramic hip implant, the H1, to resurface patients’ hips without using metal. We hope this means the advantages of hip resurfacing are kept, while the possibility of problems from using metal are lost. The ceramic hip could last more than 20 years.

Before the operation, patients have a CT scan, which we use to develop a 3D model of the damaged hip in order to plan the perfect position of the joint. We match the model of the patient’s hip with the ceramic components, which come in different sizes.

Using 3D printing, we print out the instruments we need to perform the surgery, which are sharp enough to shave off just the right amount of bone in each individual case.

During this hour-long procedure, the patient lies on their side and we make a 15cm incision just below the prominent hip bone and dislocate the hip.

The implant has to fit over the end of the ball and another into the space of the socket. The damaged bone is shaved away, so that it fits the implant precisely.

The implants are pressed on to the bones. The outward-facing implant surfaces are sprayed with a coating of titanium, so they immediately grip and move over one another, and hydroxyapatite, which encourages new bone to grow into the coating, to hold the implants in place.

So far, 23 patients have had this ceramic hip implant as part of a clinical trial. Early results are promising. Patients can return to physical activities such as cycling within six weeks and running in less than six months.

Very few patients can run after a total hip replacement.