ME & MY OPERATION: Magic magnet that could regrow your leg bone

Driving home one night in January, I was involved in a head-on collision and ended up in an induced coma for four days.

As I drifted in and out of consciousness, my husband, Paul, told me I’d been in a car accident and had a punctured lung, broken ribs and arms and serious fractures to both my legs, feet and ankles. It might sound strange, but I felt relief, as I’d feared my back might be broken and I’d be paralysed.

I had five operations over the next two-and-a-half months, and still had to use a wheelchair: my right kneecap was broken, while the bottom of my left thighbone was shattered into bits, which they hadn’t yet tackled.

My surgeon, Enis Guryel, explained that 6cm of bone in my left thigh (femur) could not be repaired. As part of the bone was sticking through the skin above the knee, the best that they could do was remove that section and put a temporary pin down the femur, to keep the leg stable until I healed enough for further surgery.

Did you know? Shattered bone could be grown back, thanks to a dynamic magnetic implant

Mr Guryel said that, in the past, doctors would’ve had to amputate a shattered leg, or, more recently, treat it using an arrangement of external metal pins and screws into the bone. They would make a cut in the thigh bone and then gradually widen the gap so healthy bone would grow and fill the place where the ruined bone had been.

This is still the way many doctors do it, but it would mean a large metal cage around my thigh with pins through the skin and muscle, with a lot of pain and a risk of infection. It sounded horrendous.

But then Mr Guryel said he was starting to use a new, high-tech nail which would help the bone that had been lost to regrow using magnets.

The stainless steel extendable nail would be inserted inside my thighbone; they’d cut across the healthy bone above the damaged area and I’d then use a special magnet at home to lengthen the nail, which would gradually pull the cut bit of the bone apart so that new bone would slowly grow to fill the gap.

Instead of a painful cage around my leg, it would all happen inside my thigh. I’d be the first UK patient to have it done. I underwent the four-hour operation in March and spent three weeks in hospital, having physiotherapy to get my legs moving. I was then transferred for further physio and hydrotherapy.

I used a frame and wheelchair at first, then crutches. Five weeks after the surgery, I was back at home.

Three times a day for 60 days, I put the magnet device just above my left knee for two minutes, then felt a strange spasm as the device expanded — it ached, but was not terribly painful.

My latest X-rays look great. The bone has grown 6cm and moved down to fill the gap. It just needs to harden. Now I can go to the park or the pool with Paul. While I still use crutches for longer distances, I’m now looking forward to walking properly again.

There are around 48,000 major trauma cases in Britain each year, often caused by road accidents and leaving patients with shattered bones. But the Precice bone transport nail, launched this year, means we can lengthen bone to replace a damaged section using an expanding nail controlled by magnets.

This is all internal, which is much less traumatic for patients than an external fixator or ‘cage’ and also means a lower infection risk. It can create up to 10cm of new bone. 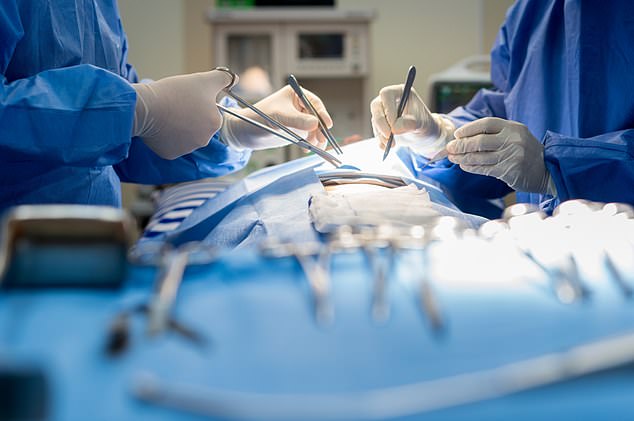 The Precice nail is a stainless steel rod up to 13mm in diameter and up to 40cm long. Inside it is an interior rod with a ratchet system controlled by magnets. When electromagnets in a handheld controller are used above the leg, the interior rod or nail will lengthen to create a gap so cut bone will gradually regenerate, while the exterior rod keeps it stable.

The surgeon monitors this with X-rays every two weeks.

The operation takes four hours under general anaesthetic. I make a 2cm incision over the hip end of the thigh bone, removing the temporary nail we used to stabilise the femur. I make a 1cm incision below the hip and drill through, then use a chisel to make a clean break in healthy bone with a good blood supply, so that bone will grow back in this gap.

I slide the Precice nail down to the knee, fixing it into bone with screws, before stitching up the incisions.

The patient rests for ten days, then starts to expand the gap by 1mm a day using the external device. Since Petroula had a 6cm gap, it took 60 days for soft bone to grow. That new bone then takes three times as long to harden and, within 180 days, it will become as strong as existing bone.

The procedure costs the NHS £25,000 (not available privately).

There are standard surgical risks of bleeding and infection.

There is a risk that new bone will be slow to form.

A less than 1 per cent risk of infection inside the nail so that it would need to be removed.

‘But it is an attractive option compared to the existing techniques using external fixators, since it reduces the risk of infection and of stiffness in the joint because patients are more mobile.’