ME & MY OPERATION: Radical new therapy that taught my body to kill off leukaemia

Three years ago, quite by chance, I was diagnosed with leukaemia. I was on a drug called isotretinoin (Roaccutane) for acne, which requires frequent blood tests to monitor for side-effects such as liver problems.

At the beginning of December 2015, I had an abnormal blood test result and was immediately sent for further checks. Days later, I was diagnosed with acute lymphoblastic leukaemia — an aggressive cancer of the white blood cells.

Looking back, I’d been tired and had a few bruises on my hands (bruises are a classic symptom), but I’d been going to an outdoor fitness bootcamp, so hadn’t thought anything of it.

It was a terrible shock to be told I had cancer, just five days after my 25th birthday. My family and my fiance, Brendon, were very upset, so I kept telling them I was going to be completely fine. Doctors did give me a prognosis — though I don’t remember what it was — I just decided to be positive. I think I was in denial.

Treatment: Tanya Hill, 27, from Bedfordshire, was one of the first people in the UK to have revolutionary CAR-T immunotherapy in the UK for leukaemia

I immediately started three months of chemotherapy on the Teenage Cancer Trust ward at Addenbrooke’s Hospital in Cambridge. Being on that ward with other young people helped me cope, but it was still awful.

By the end of the treatment I’d lost my hair, couldn’t eat properly and was so weak I was in a wheelchair. And after all that, the chemotherapy didn’t work.

My next option was a stem cell transplant, to replace cancerous blood cells with healthy ones. As this requires chemotherapy and full-body radiation, which can leave you infertile, I had IVF beforehand. Brendon and I now have nine frozen embryos we hope to use one day.

My older brother, Steven, was my stem cell donor but, while the treatment in May 2016 appeared to have worked at first, the cancer remained in my bone marrow and I relapsed last year.

The next step was inotuzumab, a drug that uses an antibody to target cancer cells while leaving healthy cells alone. It’s not yet approved by the National Institute for Health and Care Excellence (NICE) but, with all other treatments failing, my consultant prescribed it.

After three doses via a drip in March, May and July last year, with no side-effects other than tiredness, the cancer finally went into remission. It took 18 months to get there, but I felt lucky.

However, inotuzumab is only designed to give temporary remission, as a ‘bridge’ to other treatments. Having already had a stem cell transplant, my remaining option was immunotherapy, where your immune system is programmed to identify and attack cancer cells. But it’s only available as part of a trial. 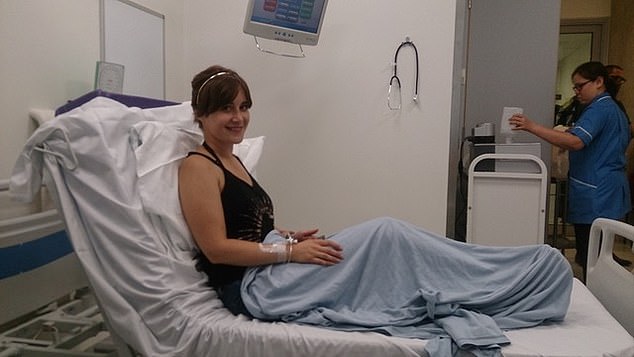 Success: After three doses via a drip in March, May and July last year, with no side-effects other than tiredness, the cancer finally went into remission 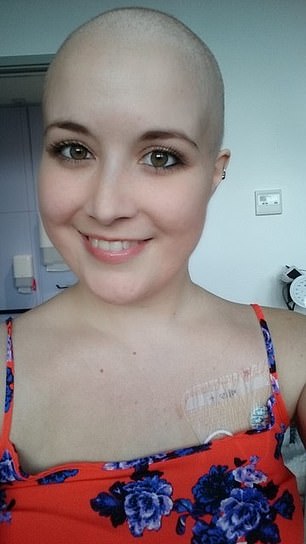 Brave lady: Aged 25, Tanya lost all her hair after three months of chemotherapy

My doctor mentioned a trial at University College Hospital in London and, in September last year, I was the third person to be accepted for it. To make the treatment, doctors need my T-cells — parts of the immune system that fight off bacteria and viruses — which would be modified to identify cancer cells and kill them.

As I’d had a bone marrow transplant, my immune system was not up to scratch, so Steven again agreed to be my donor. He was hooked up to a machine for four hours, during which white blood cells were collected from a vein.

Making the immunotherapy treatment, called CAR T-cells, in the laboratory took about a month. Receiving it through a drip only took 20 minutes — it was all a little underwhelming.

For the next few days, doctors kept a close eye on me for any side-effects, but I felt fine, and after eight days I was allowed home.

Initially, I had to go back weekly for checks, but now it is every three months. Like all 12 trial patients, I will be monitored for two years.

Right now, I’m in the clear, but there are two further doses of CAR T-cells in storage so I’ve got a back-up, which I hope I won’t need. I’ve started a new job I love — dog walking — and Brendon and I are planning our wedding. It’s fantastic to be feeling well and getting on with life again.

Dr Claire Roddie is a consultant haematologist at University College Hospital in London.

Despite significant medical advances, the prognosis for many patients with leukaemia has not been good. One area that shows the most hope for patients, where existing treatments have failed, is T-cell immunotherapy.

It’s a radically different way of treating cancer. It doesn’t use toxic drugs, but engineers the patient’s own immune system to attack the cancer. 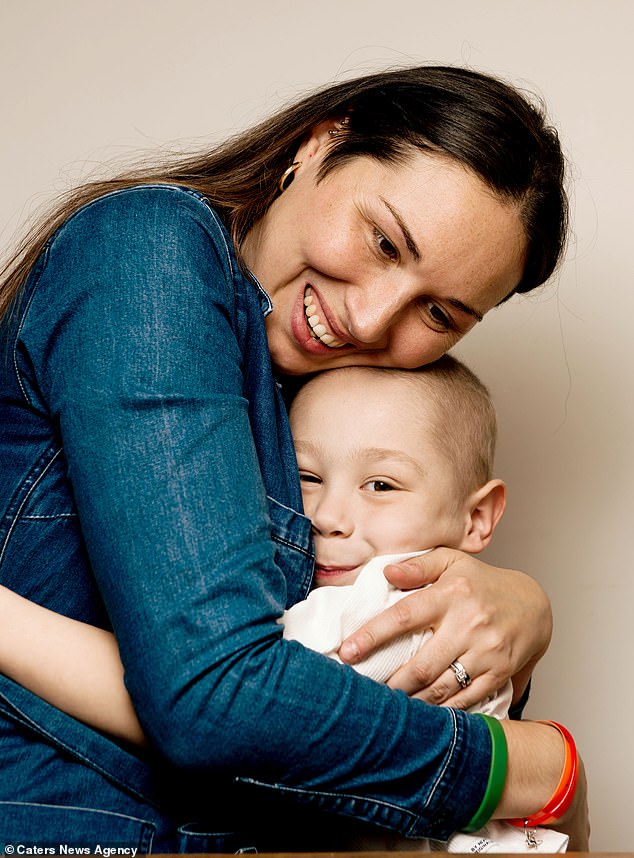 Fighting for another chance: Zac Oliver, who has Acute Lymphoblastic Leukaemia, pictured with his Mother, Hannah Oliver-Willets

Up to a third of patients develop inflammation affecting the brain. This can cause tiredness, headaches and seizures, and usually resolves spontaneously.

About 20 per cent of patients develop a flu-like condition known as cytokine release syndrome caused by the release of immune substances. It indicates the therapy is having an effect.

‘CAR T-cell therapies have shown great promise, but are complicated and highly personalised. Research helps us determine who they may work for, as well as how to minimise side-effects.’

Our bodies are very efficient at eliminating infection, but can find it difficult to kill cancer cells because they cannot always distinguish between these harmful cells and normal cells.

Recently, it has become possible to reprogram T-cells — a key part of the immune system — so that they attack cancer cells effectively. This is done by using an inactivated virus to introduce a new gene into the patient’s own T-cells. This gene adds chimeric antigen receptor or ‘CAR’ to the T-cell, so these modified T-cells are called CAR T-cells. This pairing also makes the T-cells able to recognise certain cancers.

Clinical studies of these ‘living drugs’ have shown that CAR T-cells can eliminate blood cancers in patients for whom conventional treatments have failed. These cells can live and grow in the patient, potentially preventing relapse.

Most of our experience with CAR T-cells targets a protein in leukaemia cells called CD19. A significant proportion of patients appear to be cured by a single dose of CD19 CAR T-cells.

A study of 75 children with acute lymphoblastic leukaemia, published in the New England Journal of Medicine this year, found that more than 90 per cent had a ‘complete response’ a month after this treatment, 73 per cent after six months and 50 per cent after 12 months.

What is very exciting is that, after 12 months, there appears to be no further drop in response rates, suggesting 50 per cent of patients may be looking at a cure.

Making CAR T-cells is complex. T-cells are removed by hooking the patient up to a machine that collects white blood cells and returns the remainder of the blood back to the patient. It takes three to four hours to get 100ml of blood, containing as many as 20 billion white blood cells, which are reprogrammed and grown in the laboratory before being frozen.

Once they’ve been checked for contaminants, infusing the CAR T-cells into the patient takes just minutes. For most patients, there are no serious side-effects. They can go home from eight to 28 days after treatment.

For now, CAR T-cell immunotherapy is only available in clinical trials in the UK. However, NHS England is keen to offer this therapy as widely as possible, and NICE is reviewing whether CAR T-cell treatments can be provided to NHS patients. If an immunotherapy treatment works for 12 months, it may work for ever, effectively curing the patient.