Meat-eaters not welcome! Number of vegan and vegetarian-only Airbnbs and B&Bs soars

Meat-eaters not welcome! Number of vegan and vegetarian-only Airbnbs and B&Bs soars

Britain has seen a surge in the number of vegan and vegetarian-only rentals and B&Bs.

Property rental platform Airbnb now offers dozens of places to stay where the owner specifies it is for vegans and vegetarians only.

On Airbnb, mentions of the word ‘vegan’ have leapt. 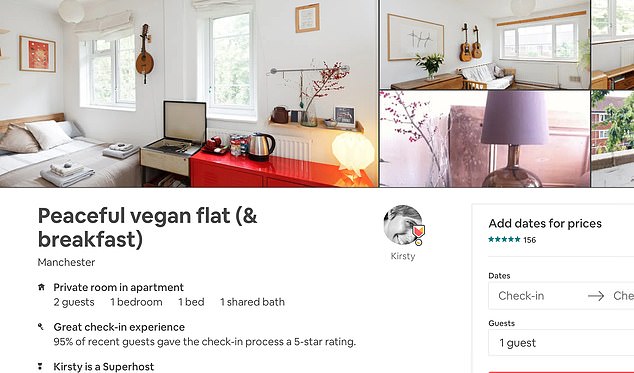 The advert for the vegan flat in Manchester (pictured), posted by ‘Kirsty’, states that the kitchen is only for rustling up vegetarian  and vegan meals

At The Studio Cherry Hill in Gloucestershire, owner Emma specifies: ‘Vegan and Vegetarian ONLY please.’

The description continues: ‘We try to be as earth-friendly [and] ecological as possible and being vegan is part of this philosophy of life.

‘We use ecological cleaning products and provide ecological vegan liquid soap and shampoo, which is important, especially as we have a private drainage system which works with gravel, rushes and willow to filter… the water, which then goes into the pond. Chemicals disturb the natural balance.’

And the owner of another property in Manchester advertises it as a ‘peaceful vegan flat’.

The description adds: ‘An artist-owned green oasis with good connections just 15 minutes from the city centre. 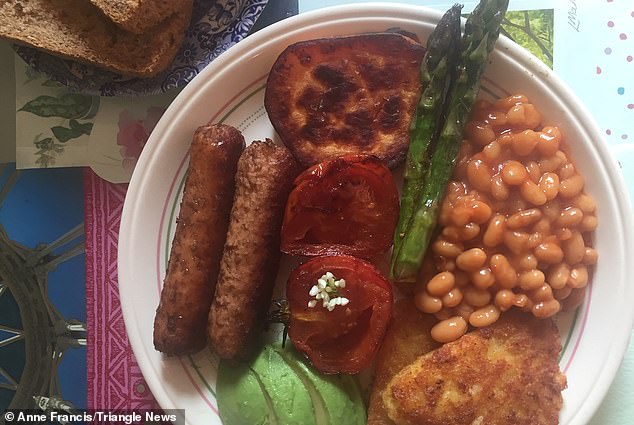 Anne Francis has been running Homestay, Norwich, for four years, but decided to make it vegetarian and vegan two-and-a-half years ago. Above, an example of the vegan breakfast she serves

‘A warm, quiet and comfortable flat with a balcony that looks out onto trees and blends quirky old furniture with a minimalist design ethic. Kitchen is vegetarian / vegan.’

Anne Francis has been running Homestay in Norwich for four years, but decided to make it vegetarian and vegan two-and-a-half years ago.

She mainly made the change for environmental reasons and says other businesses should follow suit.

Although she says she still allows meat-eaters to stay, they have to eat plant-based meals.

Ms Francis, 61, said: ‘I wanted to attract people that were closer to my lifestyle.

‘I’m flexitarian and mainly eat plant-based food. I’m always full and we get people from all over the world who are relieved they have found somewhere that will cater to them.’ 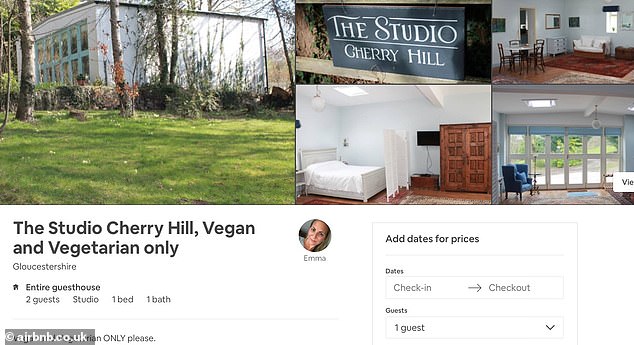 At The Studio Cherry Hill in Gloucestershire, owner Emma specifies: ‘Vegan and Vegetarian ONLY please’

David Weston, of UK trade body the Bed & Breakfast Association, confirmed the number of veggie and vegan rentals was ‘growing fast, albeit from a low base’.

He added: ‘This shows how our sector is entrepreneurial and innovates to meet new demands.

‘It’s good to see that the growing numbers of people who are vegetarian or vegan have more and more choice of places to stay, and can now choose a characterful B&B rather than a hotel chain.’

Commenting on the trend, Dominika Piasecka from The Vegan Society said: ‘The increase in vegan and vegan-friendly Airbnbs goes in line with the huge growth of this lifestyle in Britain, where the number of vegans has quadrupled in the last four years.

‘While most vegans wouldn’t necessarily mind non-vegan foods and products being present in the house, it’s a great bonus when going on holiday not to have to worry about sharing the fridge with animal products or bringing cruelty free cosmetics along.

‘I’ve certainly had great experiences with hosts adapting their breakfast offering to a vegan one and providing cruelty-free toiletries, and hope more hosts will offer vegan-friendly accommodation.’