Medical school named after Tuskegee perpetrator to change its name

A medical school is considering changing the name on one of its main buildings which is currently dedicated to the architect of the Tuskegee Syphilis Study.

Dr Thomas Parran Jr, surgeon general under President Franklin Roosevelt, is known for helping to draft the Social Security Act and for changing the public narrative around sexually transmitted diseases by calling them a medical concern rather than a moral one.

However, Parran Jr’s reputation was stained by his involvement in two of the most infamous medical scandals in US history.

The first was the Tuskegee Syphilis Study, in which US public health researchers withheld syphilis treatment from 600 black sharecroppers in Tuskegee, Alabama, for more than 40 years beginning in 1932 so they could track the effects of the disease.

In the second, researchers intentionally infected 1,300 Guatemalan people who were mentally ill or in prison with syphilis, gonorrhea and chancroid between 1946 and 1948.

The University of Pittsburgh is facing pressure from students and human rights activists who say Parran Jr’s name should be stripped from the main building of its Graduate School of Public Health, which the former surgeon general helped found.

Dr Thomas Parran Jr served as surgeon general under President Franklin Roosevelt. He is known for changing the public narrative around sexually transmitted diseases by calling them a medical concern rather than a moral one. However, Parran Jr’s reputation was stained by his involvement in two of the most infamous medical scandals in US history 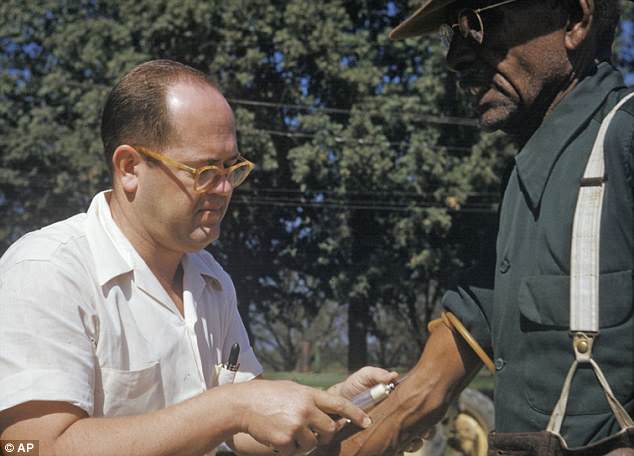 In 1932 public health researchers enrolled almost 400 black sharecroppers with syphilis in a medical study in Tuskegee, Alabama. For more than 40 years the researchers administered invasive tests while withholding treatment so they could track the effects of the disease 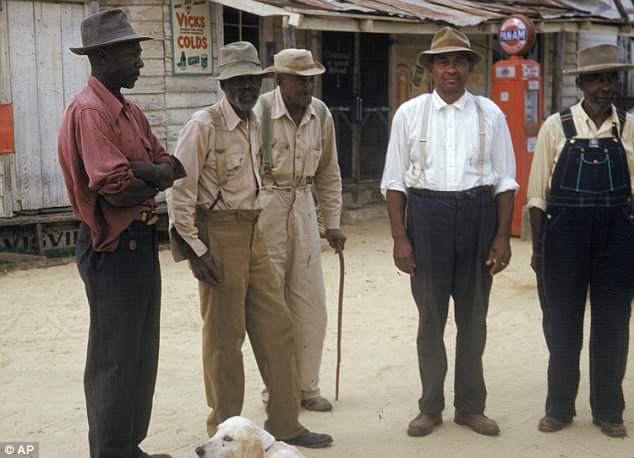 Black sharecroppers included in the 40-year syphilis study pose for a photo in Tuskegee, Alabama in the 1950s. Its believed that none of the men knew the real nature of the study until it was exposed in 1972

THE TUSKEGEE TRIAL: HOW OFFICIALS TRICKED BLACK MEN INTO THEIR RACIST STUDY THAT DEPRIVED THEM OF TREATMENT

The syphilis experiment was called the Tuskegee Study.

It began in 1932 in Tuskegee, Alabama, an area which had the highest syphilis rate in the nation at that time.

WHAT WERE THE TREATMENT OPTIONS?

When the study began, the discovery of penicillin as a cure for syphilis was still 10 years away and the general availability of the drug was 15 years away.

Treatment in the 1930s consisted primarily of doses of arsenic and mercury.

HOW THEY TREATED SOME MEN IN THE TRIAL – AND LEFT OTHERS

Of the 600 original participants in the study, one third showed no signs having syphilis; the others had the disease.

According to PHS data, half the men with syphilis were given the arsenic-mercury treatment, but the other half, about 200 men, received no treatment for syphilis at all.

HOW THEY LURED THEM TO PARTICIPATE

Men were persuaded to participate by promises of:

Seventy-four of the untreated syphilitics were still alive last January.

In 1969, the PHS’ Center for Disease Control in Atlanta, which has been in charge of the Tuskegee Study, reviewed records of 276 syphilitics, both treated and untreated, who participated in the experiment.

It found that seven men had died as a direct result of syphilis.

Another 154 died of heart failure, but CDC officials say they cannot determine now how many of these deaths were caused by syphilis or how many additional deaths may have been linked to the disease.

SURVIVORS ARE ‘TOO OLD’ TO BE TREATED, MEDICS SAY

Because of their age, the CDC cannot now treat the 74 survivors of the Tuskegee Study for syphilis.

Possible ill side effects of massive penicillin therapy constitute too great a risk to the individuals, particularly those whose syphilitic condition is dormant.

However, experts say, there was a point when the men could have been treated with some measure of success.

Parran Jr held the position of Surgeon General for more than 20 years from 1936 to 1948, during which time he worked to reduce the stigma around STDs and increase testing and treatment.

While much of his work with venereal diseases is laudable, he has been vilified in recent years for the fact that he signed off on two loathsome studies carried out under his leadership, the first being the Tuskegee Syphilis Study.

In the early 1900s, about 35 percent of the population in Tuskegee and the surrounding county of Macon were living with syphilis, an STD that begins with a small sore and can progress to open wounds, blindness, deafness, mental illness and death.

In 1929 government doctors began treating infected people in the poor, majority-black county with bismuth and mercury – two medications that were quickly found to be more harmful than helpful.

Three years later in 1932, the US Public Health Service launched what was supposed to be a short study in Tuskegee to record the progression of the illness, enrolling 600 black men in what was called the ‘Tuskegee Study of Untreated Syphilis in the Negro Male’.

The men – 399 with syphilis and 201 without – were offered food, medical exams, and burial insurance, which was a very attractive offer in the segregated South were most black people had never been to a doctor.

The disease-free men were used as a control group and those with syphilis were told that they had ‘bad blood’.

For 40 years the doctors withheld treatment for the disease so that doctors could track the symptoms and dissect the men’s bodies after they died.

Medical workers periodically provided men with pills and tonic that made them believe they were being treated, but they weren’t.

The government published occasional reports on the study, including findings which showed the men with syphilis were dying at a faster rate than the uninfected.

It’s believed that none of the participants – or their wives, girlfriends or other sexual partners – had any idea what had happened until an Associated Press story was published nationwide on July 26, 1972.

The story ultimately caused the study to be shut down, nearly 30 years after penicillin had become the standard treatment for the disease.

The other shocking study that Parran Jr was involved in took place in Guatemala from 1946 to 1948, during which time more than 1,300 Guatemalans, including many in mental institutions, were exposed to syphilis, gonorrhea and chancroid.

Parran Jr had reportedly said that consent was needed before individuals participated in experiments, but no evidence exists that the American researchers got permission.

Parran Jr died 20 years later in 1968 with his reputation in tact, only to later be tarnished by reports of the research he approved and supported. 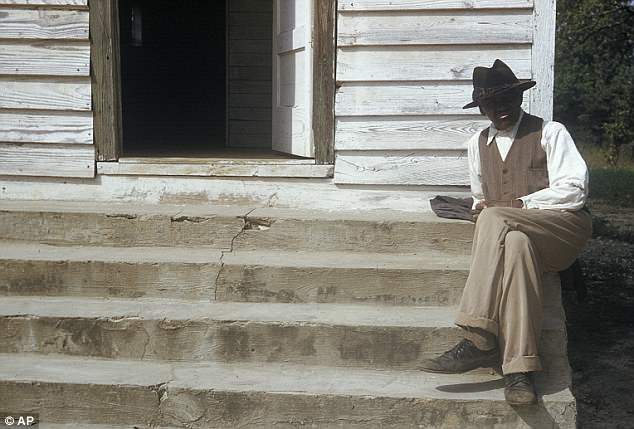 A man in a syphilis study sits on steps in front of of a house in Tuskegee, in the 1950s. The city had one of the highest rates in the country when doctors decided to start the racist study 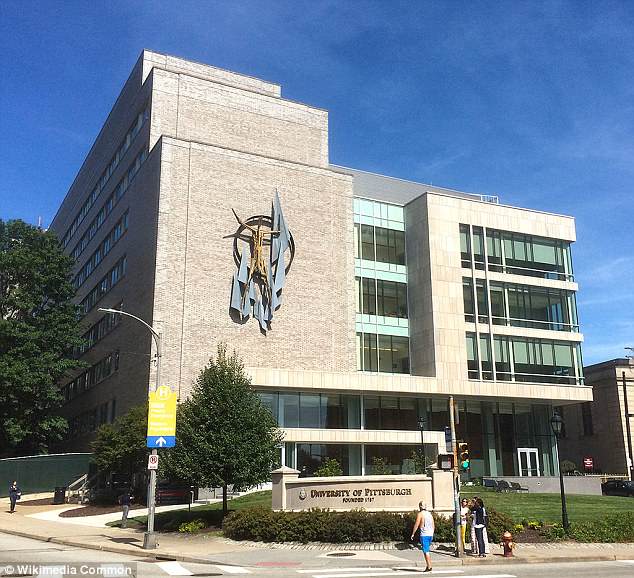 Today Parran Jr’s family is fighting to keep his name where it is on Pitt’s School of Public Health.

In an email to STAT, his grandson John C Parran and his great nephew Richard Kirkpatrick reminded that he saved millions of lives during his career through his work to improve public health.

‘No one is perfect,’ the email said. ‘The name [on the building] does not ‘celebrate’ my grandfather and grand uncle. Rather, it honors the passion he had for furthering public health awareness and education as means for improving the health and well-being of all people.’

However, many Pitt students disagree.

‘This isn’t who we are anymore,’ Helen Ann Lawless, a second-year graduate student told STAT.

‘We are still attached to this legacy. We can’t have his name on our building because it venerates him.’

The movement to remove Parran Jr’s name gained momentum last year, and in January Dr Donald Burke, the dean of the public health school, created a committee to address the issue.

It’s unclear when the committee will release its recommendations on the issue.

Syphilis is a chronic bacterial disease that can be contracted by other means but is typically a sexually-transmitted disease.

It comes from the bacteria Treponema pallidum.

Sufferers develop sores, though these can often go ignored.

The infection develops in stages.

In the early stages, patients can receive an injection of Benzathine penicillin G. This will not undo the internal damage but will eliminate the infection.

For those with latent syphilis – and are unsure how long they had it – doctors recommend having three doses of the penicillin injection, seven days apart from each other.