A million people in England have now been given a Covid-19 jab.

But serious questions remain about the race to vaccinate the rest of the nation – with retired medics trying to volunteer tied up in red tape.

Health Secretary Matt Hancock hailed the milestone, which was hit hours before the start of 2021.

It marked a hopeful end to the year after the UK became the first country to approve the vaccine made by pharmaceutical firm Pfizer.

But with health workers set to start giving people a second jab developed by Oxford University on Monday, less than a month into the vaccine drive, serious problems are already starting to emerge.

Only 530,000 doses of the Oxford jab will be available from Monday – despite experts suggesting two million a week are needed. 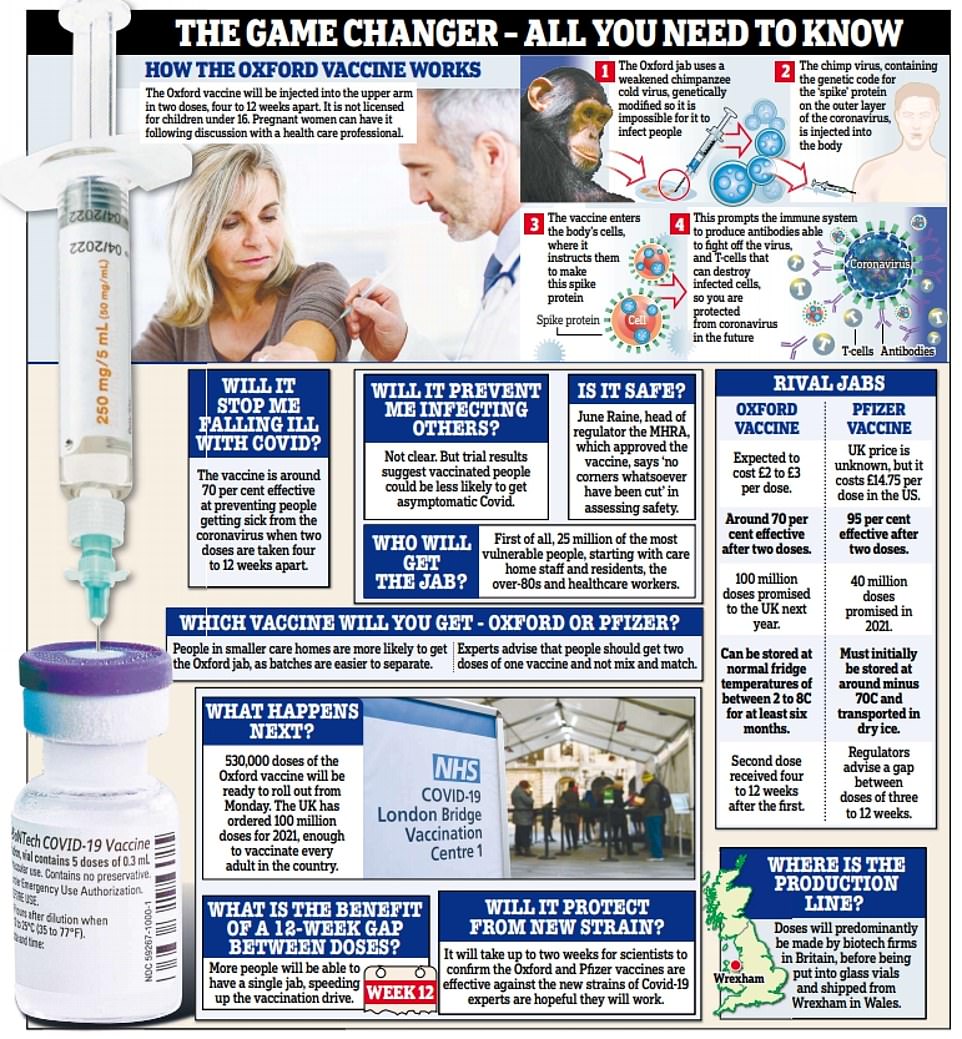 And retired doctors and nurses offering their time and skills face mountains of red tape. Some have been asked for 21 documents proving they are trained in subjects such as counter-terrorism and racial equality. In other problems:

Virus cases are soaring, with 964 UK deaths and a record 55,892 positive tests logged yesterday. One major hospital said it was on the brink of being able to treat only Covid patients. After the Oxford vaccine was approved on Wednesday, there are now enough doses of that and the Pfizer jab on order to vaccinate every adult in the UK.

Inoculating two million a week would allow everyone over 50 in the UK to be given one of the jabs by early April. 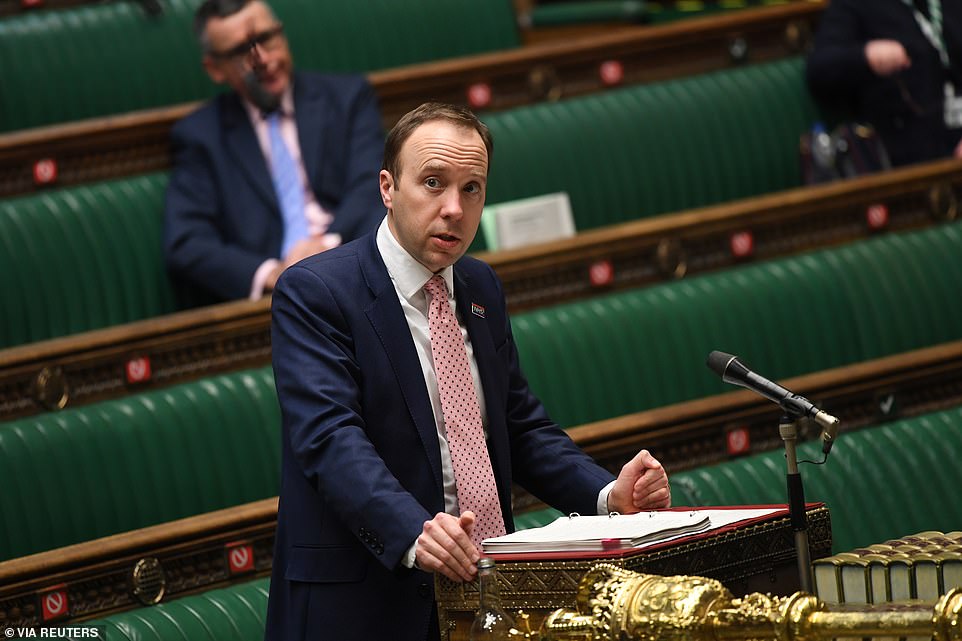 The Health Secretary praised the NHS — which is heading up Britain’s biggest vaccination drive in history — for ‘rising to the enormous task’ and said the figure should ‘rapidly increase in the months ahead’, with yesterday’s approval of Oxford’s jab bolstering the health service’s arsenal

Who will the Government sacrifice to get out of lockdown? Return to normal life depends on No10’s ‘risk appetite’

The number of vaccines Britain gives out before lockdown rules can start to be loosened will depend on the ‘risk appetite’ of the Government and how well they work in real life, scientists say.

There are around 31.7m people on the official waiting list for a jab, which includes everyone over the age of 50, people who are younger but seriously ill, and millions of NHS and social care workers.

Currently the UK is giving out 300,000 doses per week, a figure which is expected to speed up when clinics start using the game-changing Oxford University and AstraZeneca jab which was approved yesterday.

MPs and experts are calling for the vaccines to be given out at lightning speed in a desperate bid to stop the spread of the new coronavirus variant, which new evidence suggests may be so infectious that lockdowns can barely contain it.

Labour’s Shadow Health Secretary, Jonathan Ashworth, today urged ministers to ‘move heaven and earth to roll out vaccination starting with two million jabs a week’.  Even at this ambitious speed – almost six times the rate vaccinations are currently being given out – it would take until April to get one dose to everyone on the priority list.

But there is hope some restrictions could be lifted before the list is completed, with Matt Hancock saying No10 can lift restrictions ‘when enough people who are vulnerable to Covid-19 have been vaccinated then’. However, he has never committed to an actual figure.

A paper from the London School of Hygiene and Tropical Medicine said hitting the two million a week mark would have a ‘much more substantial impact’ than the far slower rate achieved last month.

But there will be only 530,000 doses of the Oxford vaccine approved and ready to roll out from Monday.

Business Secretary Alok Sharma said in May that AstraZeneca, the firm manufacturing the Oxford jab, would work to make 30 million doses available by September.

But only four million are understood to be potentially available pending checks, although tens of millions are due by the end of March.

Meanwhile, would-be volunteers are being asked to produce reams of documents.

Nicola Thomas, a professor of kidney care at St Bartholomew’s Hospital in London, said: ‘To be asked for proof of address, two references and additional e-learning, including fire safety, is really too much to bear.’ It is understood the process is now set to be simplified.

The millionth vaccination in England yesterday came less than a month after Margaret Keenan, 90, was the first in the world to be inoculated on December 8.

But while the British grandmother has received her second dose of the jab, those whose appointment for a second injection falls after Monday are likely to have it rescheduled, with the gap increased to up to 12 weeks as part of moves to vaccinate more people.

The British Medical Association has warned this would cause distress to the many elderly people first in line for jabs.

They said more people could be protected this way, adding: ‘Unvaccinated people are far more likely to end up severely ill, hospitalised or, in some cases, dying without a vaccine.’

Pfizer has pointed out that its vaccine has been trialled only with three weeks between doses, rather than up to 12.

A Department of Health and Social Care spokesman said: ‘The vaccine is being rolled out as quickly as doses can be supplied and quality checked.’ 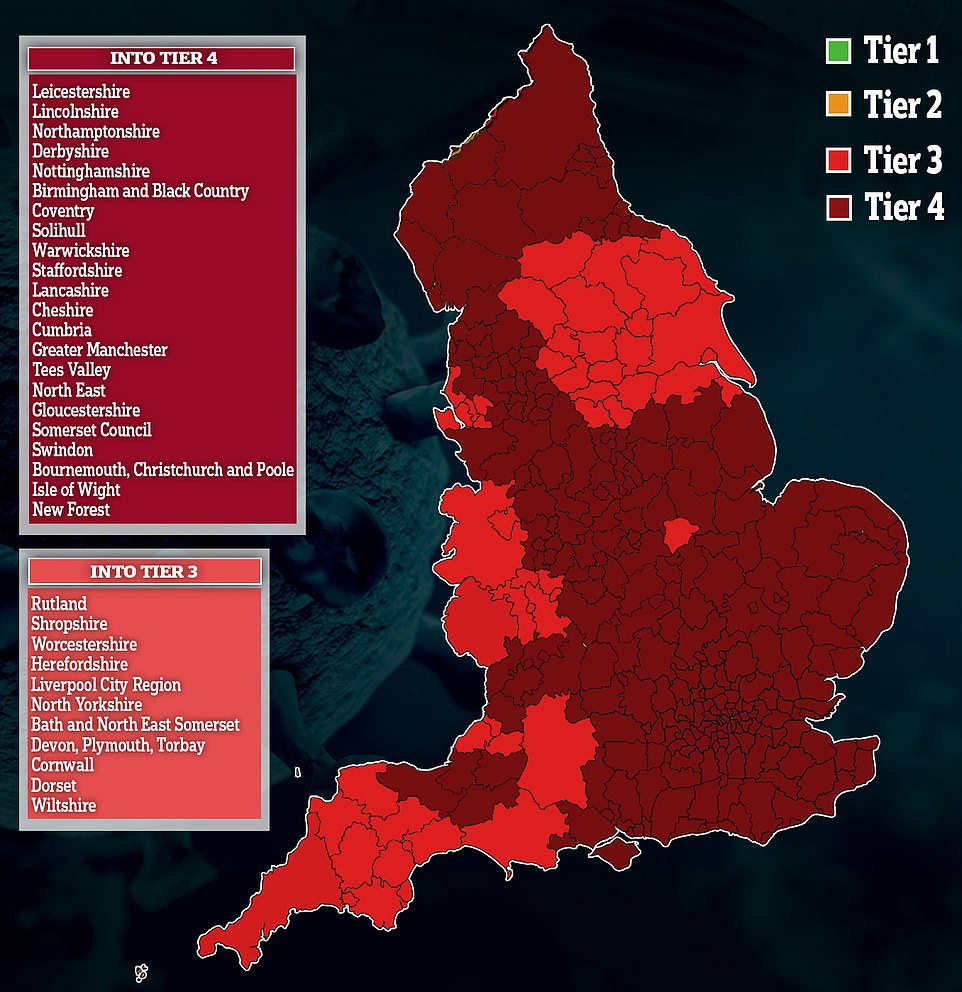 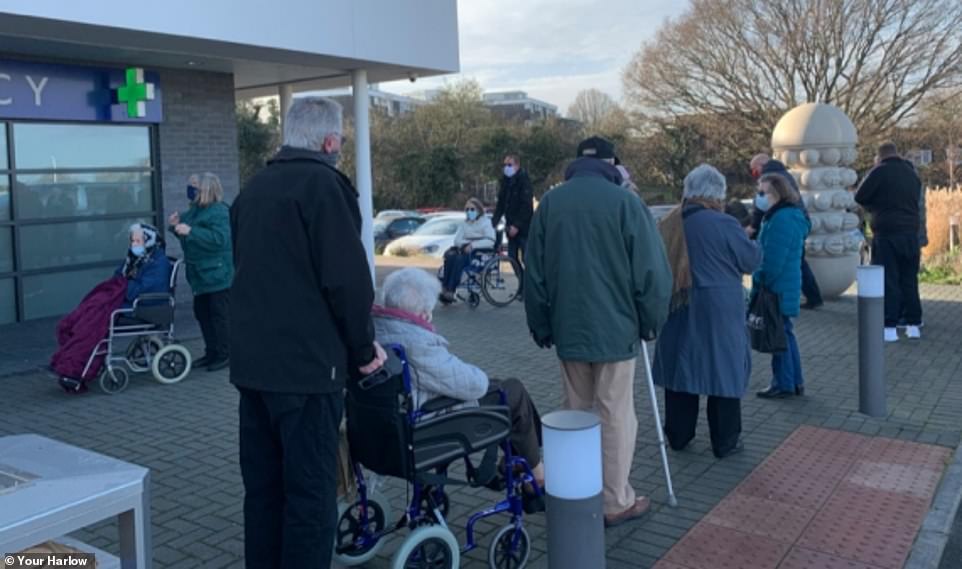 Dozens of pensioners were left shivering outside a Covid-19 vaccination centre in Harlow, Essex, yesterday after turning up for their allocated appointment only to find a large queue outside 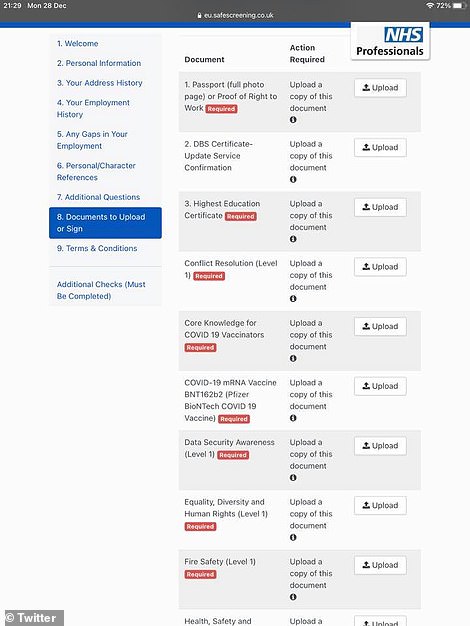 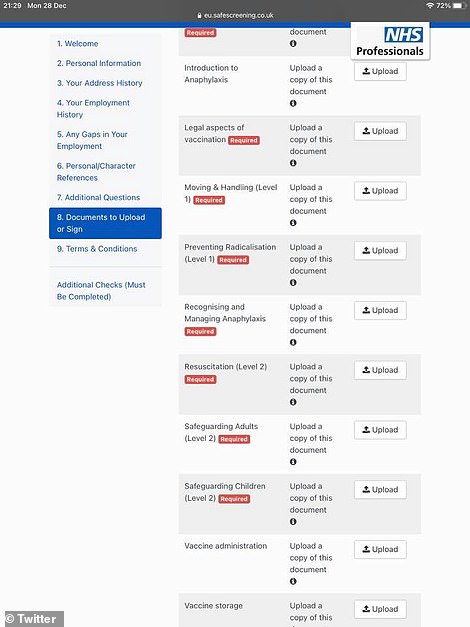 Ex-medics wanting to be deployed straight onto the frontlines to dish out the jabs have complained of the bizarre requirement to submit up to 21 documents in their application, including evidence that they have had any Prevent Radicalisation training

By VANESSA ALLEN, SAM GREENHILL and MARIO LEDWITH for the Daily Mail

Plans for a volunteer army to help vaccinate the population descended into red-tape farce yesterday.

Retired doctors and nurses answering the call to enlist complained they were ordered to show 21 documents including proof they had been on courses to combat racism and terrorism.

They also had to prove they had competence in fire safety, conflict resolution, human rights and data security. They branded the system ‘ridiculous’ and ‘impossible’, while doctors’ leaders demanded a re-think. 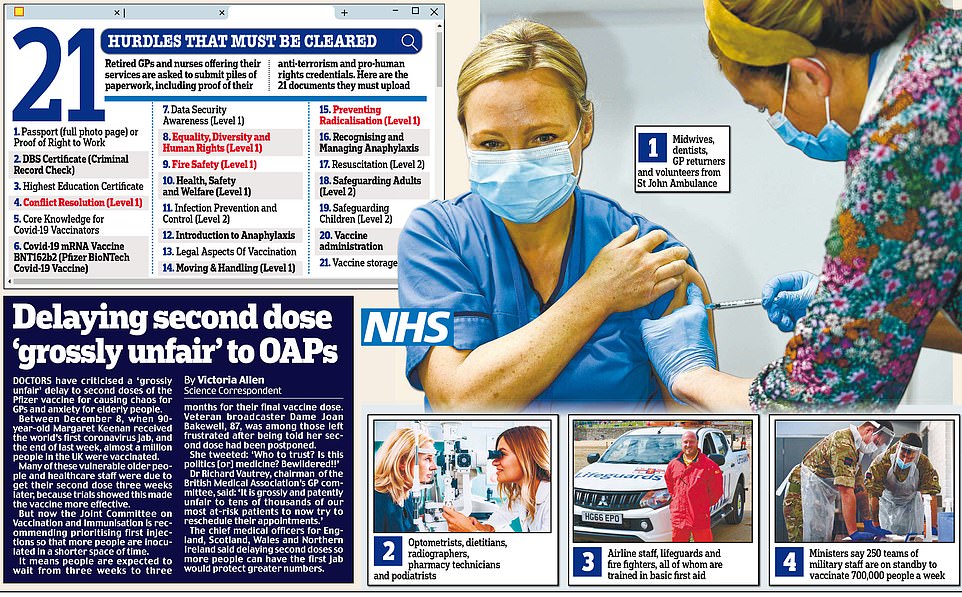 But the NHS insisted safety had to come first. In response to the outcry, a Government source last night said ministers were planning to simplify the process of becoming a volunteer.

Health chiefs are recruiting an army of helpers to ramp up vaccination levels. They have called for volunteers to ‘join the NHS Covid-19 vaccine team’, trumpeting: ‘Your NHS needs you’.

But retired doctors who volunteered to return to work have said they are being ignored by the NHS or tied up in bureaucracy.

They are being asked to fill out several pages of forms online, before finally being told to upload 21 documents.

Retired doctors desperate to roll their sleeves up and help Britain administer 2million Covid vaccines each week to end the continuous cycle of lockdowns by the spring have today hit out at the NHS ‘red tape’ that requires them to prove they aren’t terrorists before they’re allowed to chip in.

Ex-medics wanting to be deployed straight onto the frontlines to dish out the jabs have complained of the bizarre requirement to submit up to 21 documents in their application, including evidence that they have had any Prevent Radicalisation training.

Dr Melanie Jones, a former anaesthetist in South Wales, urged the NHS to ‘bend some rules’ so they can use their ‘Dad’s Army’ of up to 40,000 retired doctors and nurses who volunteered to help in the spring. Another retired medic claimed they ‘wouldn’t bother’ applying after hearing about Dr Jones’ ordeal on social media.

Despite their pleas, GPs tasked with delivering the vaccine say they urgently need more workers to help the UK drastically ramp-up the speed of the mammoth operation, which is considered the only hope Britain ever has of returning to normal life before the spring.

But the NHS has yet to call upon the Army to help turbo-charge the roll-out, with Defence Secretary Ben Wallace today insisting the military ‘stands ready’ to deliver as many as 100,000 doses a day, should it ever be called upon by the health service. Even Tesco has offered to hand over its network of refrigerated lorries and warehouses to turbo-charge the roll-out.

These include a copy of their passport and highest medical qualification, but also certificates on ‘Preventing Radicalisation’ – a course designed to help thwart terrorism – and equality, diversity and human rights.

Former and current NHS staff can fill in any gaps by completing ‘e-learning’ courses online.

Angus Dalgleish, a professor of oncology, said: ‘It is little wonder that there is a delay to starting mass vaccination, which should have begun yesterday. They are wrapping everyone up in red tape.

‘And it is frankly insulting to senior clinicians. The fact is, you don’t need to question the competence of a retired GP or pharmacist.

‘They know what they are doing and you should just thank them for offering to help and let them get on with it. Instead, people are giving up in despair.’

Claire Barker, a GP who ran her own practice for 30 years until she retired in 2017, said: ‘I have spent my life doing jabs like this. It is very frustrating.

‘I am an intelligent, computer-savvy person, but the NHS website takes you up a blind alley. It does need to be more straightforward.’

Retired dental surgeon Graham Odd, of Winchester, said: ‘I expected some further training for this role but, having spent the past two days doing e-learning assessments, I still have many more to do and am beginning to lose the will to continue.’

Professor Martin Marshall, chairman of the Royal College of GPs, said: ‘Requiring people to submit more than 20 pieces of documentation, some of which have low relevance to the task they will be doing… is a deterrent for them getting involved at a time when we need all hands on deck.’

Two million people per week must be inoculated to make good on Boris Johnson’s pledge to bring the country back to normality by spring, say experts.

Sports stadiums and conference centres are being lined up as vaccination centres.

But the bureaucracy involved in recruiting medical staff to administer the jabs is causing consternation.

Last night the NHS said: ‘It is categorically untrue that there are any delays in Covid vaccination caused by accrediting volunteers or returners.

‘We are delighted that former members of NHS staff have applied to become vaccinators and actually tens of thousands of people have already completed their online training, and these are being processed as quickly as possible.’ 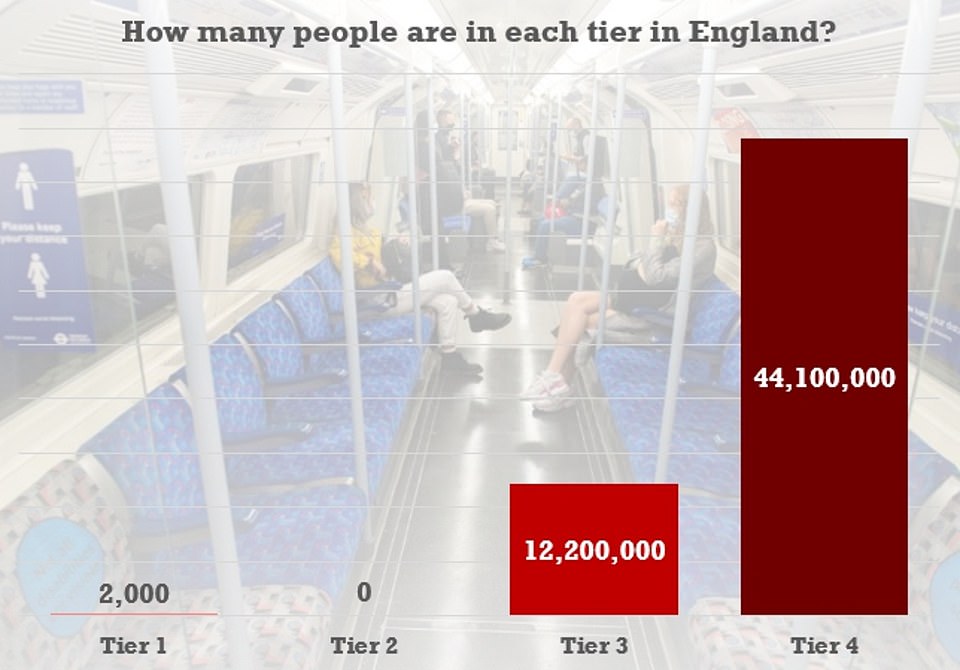 Just 2,000 people on the Isles of Scilly are left in Tier 1 – with everyone else in England now under the highest Tier 3 and 4 lockdowns from midnight