Kate Ball, 30, first suffered anaphylaxis when she was just 15 after eating a fish paella while on holiday in Spain

Within minutes of eating a few mouthfuls of fish paella while on holiday in Spain, Kate Ball fell unconscious.

As her lips turned blue and swollen, the then 15-year-old was rushed to hospital, where she was diagnosed with anaphylaxis — a potentially life-threatening allergic reaction caused by the immune system over-reacting to a trigger.

‘I was unconscious the entire time and was told I’d almost died,’ recalls Kate, who is now 30 and a software worker from Telford, Shropshire.

At the time, the frightening episode was baffling, as Kate had never had an allergic reaction to anything before. In fact, she wasn’t allergic to one particular food — it was the combination of ingredients in the dish that had triggered her reaction.

Up to 20 per cent of Britons have an allergy, ranging from mild to moderate (causing symptoms such as a rash, mild swelling or an itchy mouth), to severe (which can lead to a drop in blood pressure, collapse and even death).

Identifying the cause can be a drawn out process of elimination, taking months or even years, particularly for those with mild allergies.

But for thousands of others such as Kate, affected by so-called ‘co-factor’ allergy, this process is further complicated because the reaction is only caused by a specific combination of factors — not a single factor.

Back in the UK, she had a series of pin-prick tests, where small amounts of allergens are injected into the skin to test the body’s reaction — all of which came back negative.

Based on the circumstances of her reaction, the allergy specialist concluded that it had been due to a combination of the fish and wine in the paella.

So, although Kate can eat fish and drink wine on their own, eating fish cooked in wine or when accompanied by a glass of wine, will trigger a reaction.

‘The specialist explained that, although it’s rare, when wine and fish are together, it can cause an anaphylactic reaction in some people because the two become “co-factors”, bringing on an allergic reaction,’ says Kate. 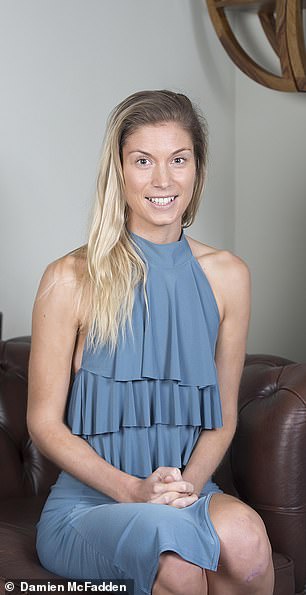 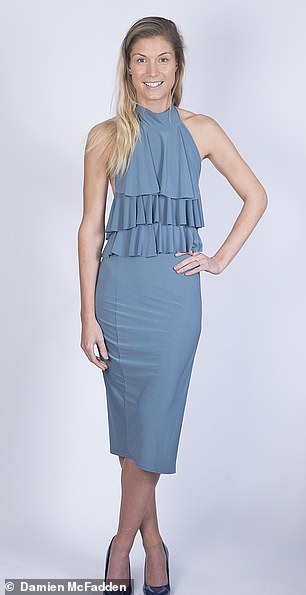 She later found out that a combination of ingredients caused her allergic reaction. Up to 20 per cent of Britons have an allergy, ranging from mild to moderate (causing symptoms such as a rash, mild swelling or an itchy mouth), to severe (which can lead to a drop in blood pressure, collapse and even death)

Exercise, alcohol and sleep deprivation, as well as non-steroidal anti-inflammatory drugs (NSAIDs) such as ibuprofen, are all co-factors that can turn otherwise harmless foods, or substances in some circumstances, into potentially life-threatening allergies, explains Susan Leech, a clinical lead in paediatric allergy at King’s College Hospital NHS Foundation Trust.

‘It’s thought alcohol, exercise or NSAIDs can increase the absorption by the gut of the protein in a food that can trigger the allergy,’ she says. This is because these factors ‘induce changes in the blood supply to the gut’.

‘These co-factors make the proteins pass more easily through the wall of the gut,’ she explains. ‘They can increase the severity of a reaction and reduce the threshold at which the patient reacts, so they have allergic reactions after eating smaller amounts of the food.

What to watch for

If you have an existing food allergy, these things may make you more likely to suffer a reaction, or to react at a lower dose, or for the reaction to have a more severe effect:

‘Some patients, for example, will eat wheat, then exercise and get what’s called exercise-related anaphylaxis. This is the most common type of co-factor allergy.’

‘Cooking can disperse allergens — this is usually seen with fish or eggs, and means someone with a fish or egg allergy may react if they go into a kitchen where someone is frying fish or eggs,’ she adds.

‘However, cooking may also reduce the allergenicity of certain foods — such as milk or eggs —making them less likely to cause an allergic reaction. So someone may react to scrambled or boiled eggs, but could tolerate well-cooked egg in a cake.’

A diagnosis of food allergy can be confirmed by a blood test. Following her diagnosis, Kate was told to carry an Epipen (a device for injecting medicine to treat a severe allergic reaction) at all times — and to avoid fish and wine together. ‘Afterwards, I was really careful,’ she says. ‘If I ordered fish in a restaurant, I always asked if it had been cooked in wine. 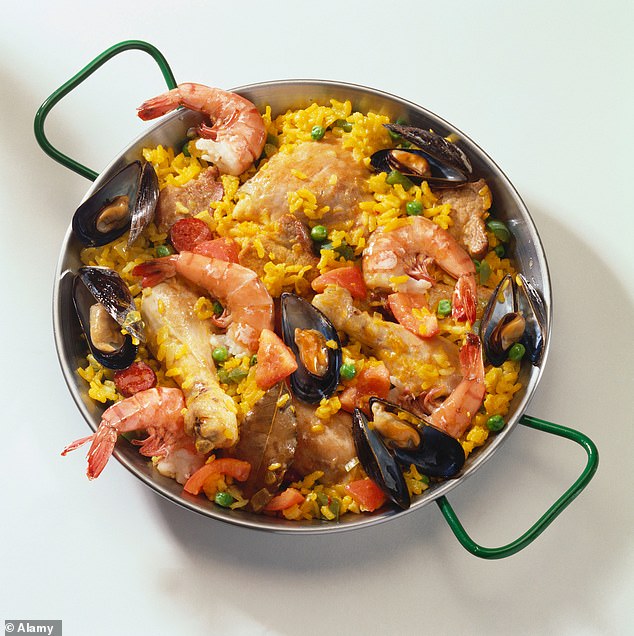 Based on the circumstances of her reaction, the allergy specialist concluded that it had been due to a combination of the fish and wine in the paella (stock picture)

‘I got varied responses — some waiters rolled their eyes as if I was being fussy, so I ended up avoiding fish for years as I felt no one was taking it seriously and I was too scared to risk it.’

While Kate was usually very careful, one night, six years after her diagnosis, she let her guard down when out for a meal.

‘I just forgot about my allergy — it had been ages and nothing had happened — so I ordered some fish and had a glass of red wine,’ she recalls.

Moments later, Kate’s head hit the table; she passed out, her lips turned blue and started to swell, and she had to be taken home by friends. ‘I learned a hard lesson — I was still very allergic,’ she says.

She suffered another severe allergic reaction six months later — but this time she’d been more careful. ‘I’d ordered fish but asked for a soft drink,’ she says.

‘The menu didn’t say anything about wine in the sauce or in the cooking process. Perhaps I was naïve, but menus are so good at listing everything, I thought I’d be all right, and so I didn’t ask the waiter to check.’

Again, moments after eating her meal, Kate passed out. Her mother, who was with her, grabbed her Epipen and administered it.

‘I was rushed to hospital where they told me I could have died,’ says Kate. ‘There must have been wine in the cooking process of the fish, despite it not being listed.’

Tablet time: The best time to take your medication

Research suggests flu vaccinations are more effective in the morning.

A 2016 study by the University of Birmingham found that those given the jab between 9am and 11am had greater protection against two out of three strains of flu a month later compared with those vaccinated between 3pm and 5pm, reported the journal Vaccine.

Professor Janet Lord, one of the investigators at the university’s Institute of Inflammation and Ageing, said: ‘Our results suggest that by shifting the time of jabs to the morning, we can improve their efficiency with no extra cost to the health service.’

Kate’s experience is typical of many people with food allergies or sensitivities. A report by Caterer.com found that 57 per cent of people with dietary requirements felt that restaurants didn’t provide for their needs.

In April 2017, Owen Carey, who was celebrating his 18th birthday, died after eating a burger at a Byron Burger restaurant at the O2 Arena in London.

Owen was severely allergic to milk and had told the restaurant staff. However, unbeknown to him, his chicken burger had been marinated in buttermilk.

Natasha Ednan-Laperouse was only 15 when she died in 2016, after suffering an allergic reaction to sesame seeds in a Pret-a-Manger baguette, which were not listed on its ingredients. Her parents are now campaigning for consistent food labelling in the UK.

These are often provided as information for the staff rather than the customer, says Dr Leech, who wants laws to ensure people with allergies know what they are eating in all food establishments in the UK. ‘There needs to be a standard labelling system, including what the food is cooked in.’

She advises: ‘If you have an allergy, tell waiting staff and ask to see a list of all the ingredients.’

Kate now avoids fish or wine when eating out.

‘People are dying unnecessarily because of inconsistent labelling and because restaurants don’t include the ingredients foods are cooked or prepared in,’ she says. ‘Something needs to change.’