Most date nights include a meal of some kind, whether home-cooked or in a posh restaurant.

But for one couple, date night meals often clock in at more than 5,000 calories and millions of people watch.

Randy Santel and Katina DeJarnett are competitive eaters who travel the world to compete in food challenges, sharing footage of their big eating online.

Prizes for the gut-busting challenges can range from hundreds of pounds to T-shirts and a spot on a wall of fame. 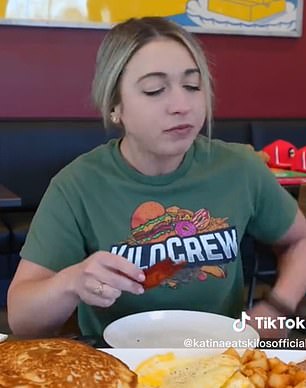 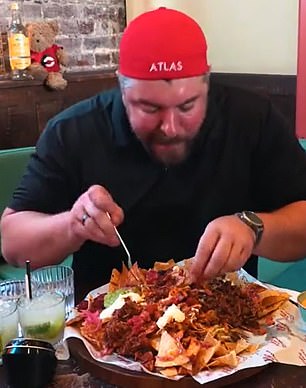 The couple often attempt challenges together but aren’t competitive, Mr Santel said. They met doing a tour of Alaska

Mr Santel has done a whopping 1,135 challenges so far and regularly manages enormous challenges, including burgers and steaks, fish and chips and eight-pound burritos.

The pair met after Mr Santel messaged Katina DeJarnett to ask her if she would join him for a challenge.

He had been invited to try a ‘Garbage Can’ pizza challenge in Alaska and needed a partner.

Ms DeJarnett, who is just 5″2, was developing her own following as a big eater at the time.

Over the course of the nine-day tour, the couple fell for each other.

At the end of the trip Ms DeJarnett ‘forced’ Mr Santel to ask her out properly.

They have been enjoying food challenges together ever since and have travelled the world eating enormous meals.

But despite being competitive eaters, the two don’t see each other as competition and are very supportive, Mr Santel said.

‘She’s beaten a lot of my food challenge times and stuff and she will usually go after me when we do events.

‘I do a lot of talking for our videos and I don’t focus too much on time so she actually beats my time quite a bit, which is funny. It also makes it good for her video too,’ he explained.

But that doesn’t mean there’s no fighting spirit between the couple.

‘I’ll talk some c**p after I finish and say you can’t beat that and that triggers her to want to win.

‘We only really get competitive when we play Rummy 500 or card games.

But Mr Santel said they don’t let the competition interfere with their eating challenges.

Large crowds are often attracted to their eating events and the couple are full-time influencers with millions of followers between them.

Mr Santel previously worked in construction but now lives off the income he makes as an online influencer.

Ms DeJarnett spent seven years in the U.S. Air Force and was a Washington Air National Guard until March 2022 before becoming a full-time YouTuber. 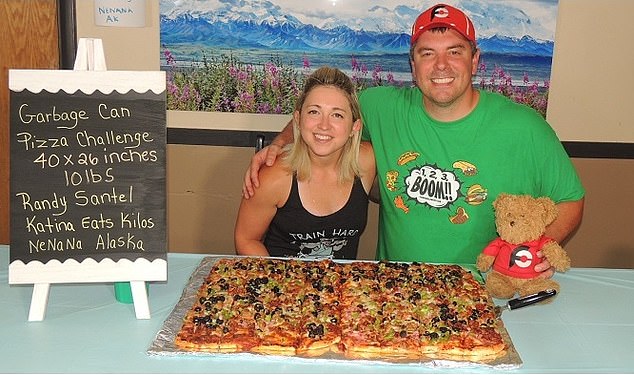 The couple met after Mr Santel asked Katina to join him on a tour of Alaskan food challenges, including a pizza challenge

He said some of his favourite challenges have been in the UK and he has a special appreciation for the Parmo, a Middlesbrough delicacy.

‘Parmo is one of my favourite foods up there in the Middlesbrough area. While we were over there I did three parmos in a row, all around the Teeside area.

‘One of my favourites is I love kebabs. At a place called the Station Hotel in Pickering I did a challenge that was like a double parmo stuffed with kebab meat in between each one. So I know that was one of my favourites,’ Mr Santel said.

‘I did a Nachos challenge at Las Iguanas in London. I’d say that was one of my favourites because it was very cheesy of course but there were a whole bunch of different meats and vegetables there.

‘Loaded nachos don’t do as well for videos but I really enjoyed the variety and the taste and it all went down just because the nachos were so cheesy and juicy.’

The Loaded Nachos challenge, which is three servings of the largest portion of nachos at the restaurant, weighs in at 3,285 calories, well over the recommended limit for men of 2,500 calories a day.

Mr Santel says the spicy challenges are the hardest but are closely followed by sweet ones – especially if there are lots of extra toppings.

‘Spicy challenges are very difficult just because they’re really hot and they take a lot of mental strength and willpower to actually finish the boiling hot lava that you’re eating, whether it be chicken wings or whatever it is.

‘I would say desert challenges are usually hard. Ice cream itself isn’t hard but if there’s a lot of toppings there, like cookies, brownies and candy that can make it a little tougher.’

How many calories are in food challenges?

Food challenges often include more than the recommended number of calories for a single person for a day.

Here’s a list of some of Mr Santel’s challenges and how many calories he had to consume.

One portion of the chips comes to 1,095 calories – making the food challenge a whopping 3,285 calories.

The competitive eater said the chip challenge was one his favourites, as he ‘really enjoyed the variety and the taste and it all went down just because the nachos were so cheesy and juicy’.

Mr Santel started his journey to becoming a competitive eater with a 28-inch pizza challenge in St Louis, Missouri.

A normal 14-inch pizza from a high-street chain has between 2,300 and 2,500 calories, although this can be more if it has lots of toppings.

This would mean the enormous 28-inch pizza would likely have been more than 5,000 calories – twice the recommended daily limit for men. 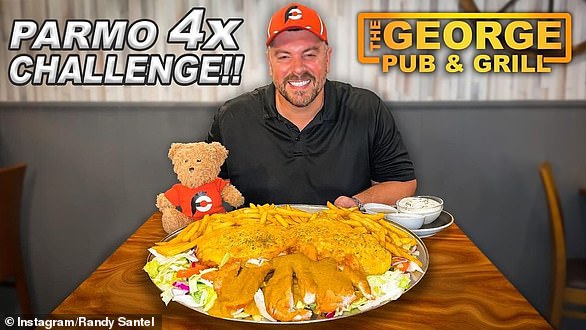 Mr Santel said he particularly enjoyed cheesy dishes, including a Parmo, a delicacy from Middlesbrough

A typical chicken parmo with chips and garlic sauce clocks in at more than 2,000 calories.

This means that the parmo challenge that Mr Santel devoured at the Station Hotel in Pickering would have seen him eat at least 4,000 calories of chicken and triple-cooked chips.

Adding in the doner kebab meat and pound of coleslaw that the parmo challenge is served with brings the entire meal to more than 5,000 calories. 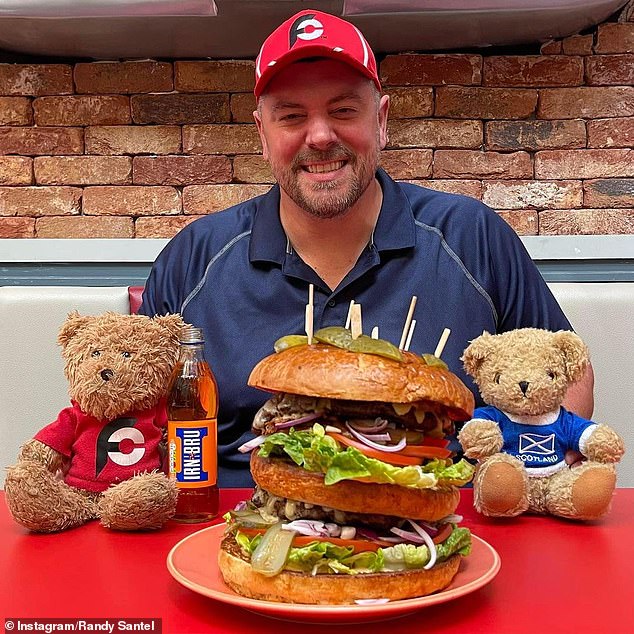 Very chewy food and badly cooked meals can make the challenges much harder. Sweet challenges can cause a sugar rush which is difficult to recover from 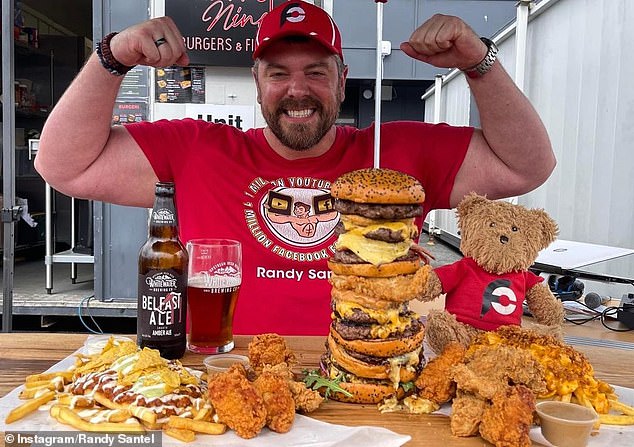 Mr Santel did his first challenge in March 2010 after entering a body transformation challenge. He realised he might be good at extreme eating after not feeling completely full

Other things that can make an eating challenge more difficult include badly cooked food or chewy food, as it is hard on the jaw.

‘Anything that’s really chewy, if the restaurant doesn’t cook it right, if it’s a really thick crust pizza where the crust is very chewy.

‘Or if it is an overcooked steak or an overcooked three to four pound beef burger patty, anything that works with the meat or whatever is really dry and chewy is really tough on the jaw, which can make you eat slower and end up running out of time or you just get tired of eating.’ 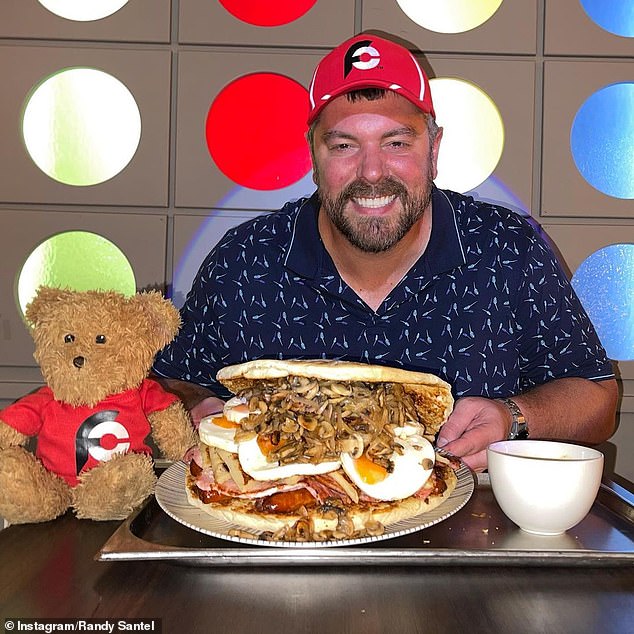 He said when he is not doing food challenges, he eats really boring food and lots of vegetables. He is training to be a registered dietitian and is studying for a master’s degree 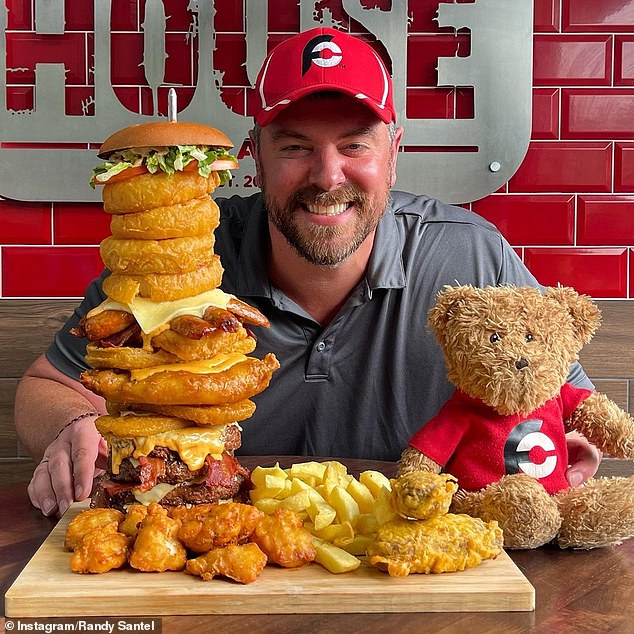 The big eater won $450 for his second food challenge but it took some time for Mr Santel to earn enough to live from the money he won doing the challenges. He worked in construction for much of his early career

An average 14-inch pizza typically has between 2,300 and 2,500 calories, depending on toppings.

Mr Santel said it was after still having a ‘little bit of room’ that he thought he might be able to do more challenges.

‘A month later I did my second food challenge which was an 18-inch by 18-inch pretty thick square pizza in Jefferson City, Missouri, about an hour and a half away from my family’s house. 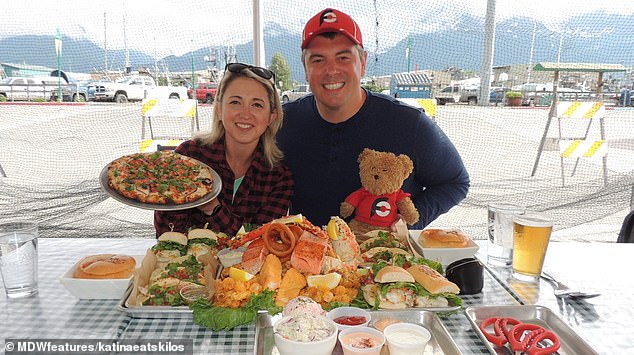 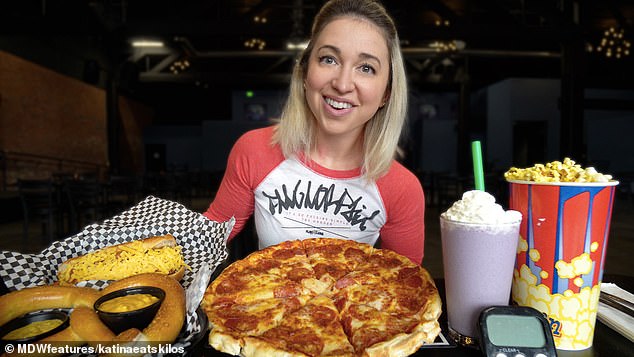 Ms DeJarnett, who is just 5″2, met Mr Santel in 2020 on a food trip to Alaska after she started doing food challenges

As a college American football player, Mr Santel said he had always been a big eater, gaining more than 100 pounds in a year while he was at high school.

‘Trying to be a better, heavier lineman, I actually gained over 100 pounds in a year during high school. You don’t really do that eating a small salad.

‘So, I’ve always been a big eater. The food challenges came natural to me. Being able to eat big, there’s definitely a genetic component. But it can of course be improved by training as well,’ Mr Santel explained.

He said his training routine has changed as his stomach is now bigger than it was when he started. 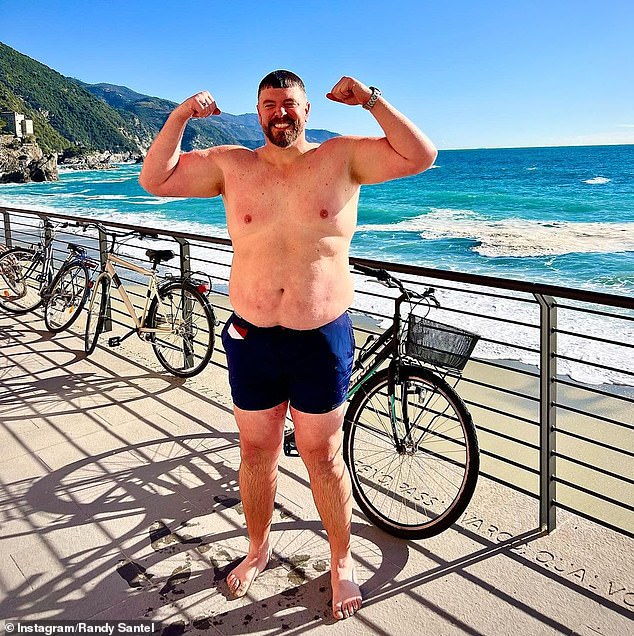 Mr Santel eats more healthily when he is not doing food challenges and aims to do 10,000 steps a day. He also owns a spin bike which he uses regularly when he is at home 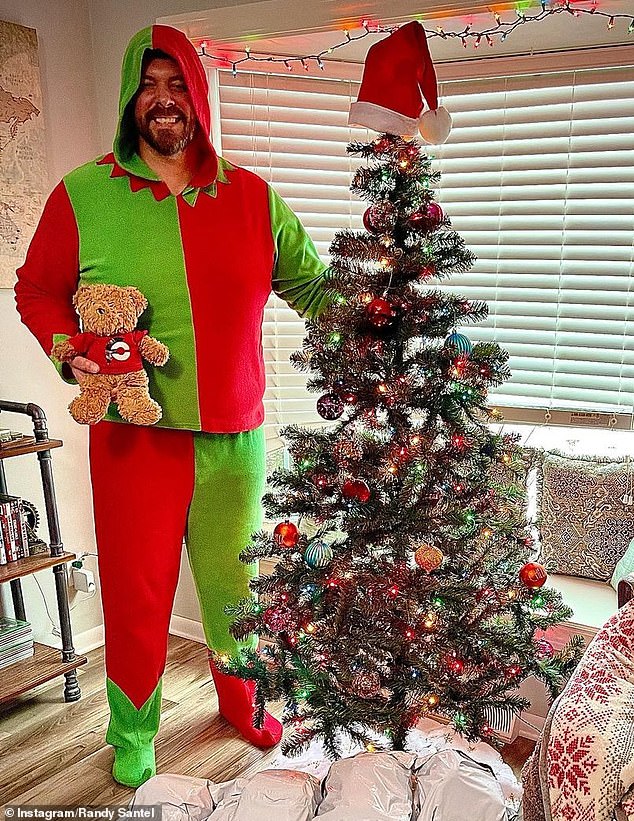 How much should one person eat each day?

The recommended guidelines suggest that a healthy adult should eat between 2,000 for women and 2,500 for men.

The number of calories you should eat can change based on your age, diet and lifestyle.

Your size can also affect your metabolism, which can change how quickly you burn energy.

Other factors include some hormones, medicines and whether you are unwell.

Many restaurants now print the number of calories in their food on their menus after the government made labelling mandatory in 2021.

If you believe that your weight is unhealthy, you can use a BMI checker on the NHS website to check your health.

Previously before a challenge, he would go to his local shop with an all-you-can-eat salad bar and spend an hour eating as many fruits and vegetables as possible.

‘I would eat as much as I could over the course of an hour and I would do that 20 hours before my Friday food challenge, which was usually after work. I wouldn’t really eat anything other than a protein shake on the Friday,’ Mr Santel said.

‘Then I would just make sure that I was hungry and well-hydrated. You don’t want to go in dehydrated but you also don’t want to be peeing a lot either because you can’t go to the bathroom during food challenges.’

Taking digestive enzymes before every challenge – a double dose for a particularly difficult one – helps Mr Santel recover from the large amount of food.

‘The big trick to recover from food challenges, is, yeah, there’s a load of calories associated with all the challenges but the real killer is the sodium.

‘You can be really bloated after doing a really high sodium challenge, like a burger – anything that’s really salty,’ Mr Santel said.

‘So the trick is to start drinking water as soon as you can in order to help combat all that salt so you can get it flushed out the next day.’

Despite his enjoyment of food challenges, Mr Santel said he was thinking about hanging up his hat in the next few years. He has been training to become a dietitian and is currently finishing his master’s degree.

‘I would like to get to 50 countries I’ve done a food challenge in before I’m all done but there’s not really a number any more.

‘It’ll be probably another year or two and then I’ll probably start to work on hanging it up.’