Clucky love! Meg the cocker spaniel adopts orphan quail chick – and even lets the tiny bird sleep under her ear

A loving cocker spaniel has become a ‘surrogate mum’ to an orphan quail chick – letting it follow her around everywhere and even sleeping under her ear.

Izzy Eyre was devastated when her quail died after laying eggs at their home near Hadrian’s Wall, Northumberland, in February and only one hatched after she incubated them.

However to her surprise, the family’s pet working cocker spaniel Meg stepped in to become a surrogate for the tiny bird, known only as ‘Little Chick’.

A loving cocker spaniel has taken an orphan quail chick under its wing to the surprise of her family from Hadrian’s Wall, Northumberland 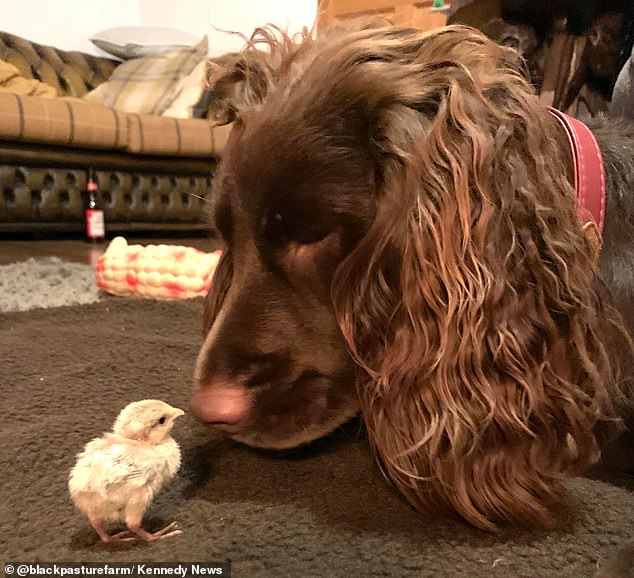 The pair have been inseparable ever since, playing and even cuddling up together to sleep – with adorable photos showing Little Chick and Meg snuggling up and rubbing noses with each other.

Izzy, a nanny, said: ‘The chick definitely sees Meg as its surrogate mother.

‘We decided to take it in as quail are very sociable and love company.

‘So we took it home and Meg just fell in love with it straight away.

‘Because we’ve hand-reared it, it has become really tame and that’s why it follows us around everywhere and loves Meg.

‘When it pecks her, it’s like it’s testing her. Meg will paw her back but she’s always really gentle. 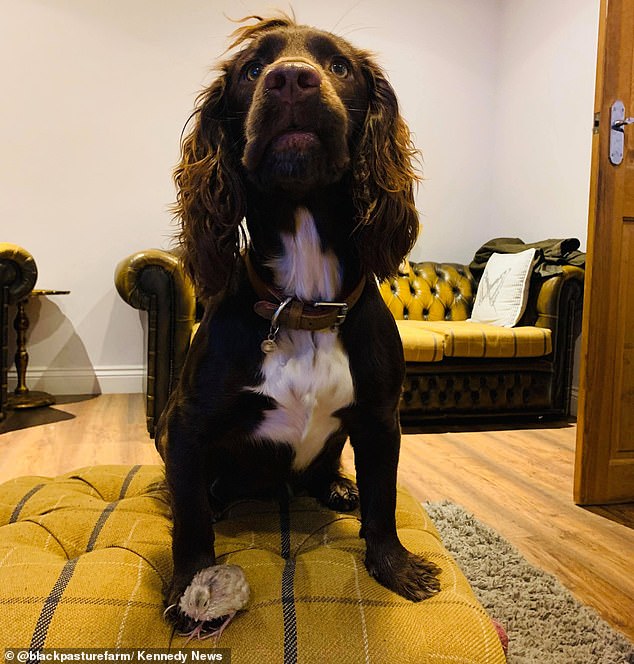 ‘Because we’ve had birds around us we know how they behave and the chick acts with Meg like a bird would with its birth mum.

‘If it gets a little bit of grape or egg to eat, it’ll run away and hide so Meg can’t get any, which is what a chick would normally do with its mum so they don’t pinch it off them.’

Despite its diminutive stature, the quail chick ‘runs the house’ and follows Meg, Izzy and her farrier fiance Jack Duggan, 27, everywhere.

The chick even has its own ‘bedroom’ where it sleeps under a lamp for heat and on top of a goat teddy bear so it is a little higher up.

Izzy said: ‘It basically runs the house. It just runs around the house, following us everywhere. 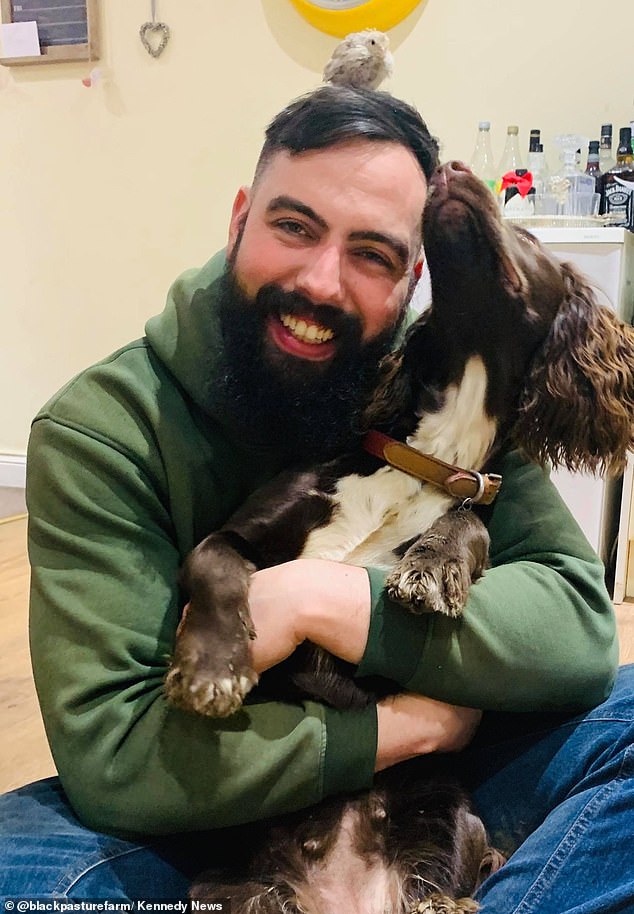 ‘Meg absolutely loves it, which is great.

‘The chick will sleep under Meg’s ear and has done that since she was just a few days old.

‘Even when the chick is pecking away at her, Meg just goes with it. She always wants to play with it.’

Meg has become so used to different species of animals as Izzy and Jack used to live on his parents’ farm where there are more than 400 animals and she still visits it every day.

Part of their huge furry family, there are pigs, peacocks, chickens, turkeys, cows and rheas, all of which the cocker spaniel has become very comfortable around.

Izzy said: ‘Meg’s such a loving dog. She’s such a sweetie.

‘She’s been brought up with our animals so she sees them all as her family.

‘She isn’t scared of any of the animals, she loves being on the farm around all the rheas and the cows.’

Izzy is currently six months pregnant with the couple’s first child and it seems Meg is using the chick as a practice run before the baby arrives.

Izzy said: ‘Meg is going to be such a great big sister.

‘She’s getting her practice in with this chick.’