From any angle, the family is a bit dodgy. There’s a grandfather who was born in Corfu, on the kitchen table of a house called Mon Repos, and whose father died bankrupt in Monte Carlo in the arms of an actress. And the grandfather’s mother was locked up in a sanatorium, believing herself to be Jesus.

As for the current lot of aunts and uncles, well: least said, soonest mended. A playboy with dodgy Eastern European connections; an army dropout with a failed career in light entertainment; a Shopping Channel air head who was once photographed having her toes sucked by her ‘financial adviser’.

And let’s not mention Great Uncle Edward, who had a succession of affairs before chucking in his job to run off to France with a double-divorcee from Baltimore and remained on non-speaks with his family for the rest of his life.

So much for the Windsors. The Markles, on the other hand, seem much more dependable – solidly middle-class, with an interest in the past. 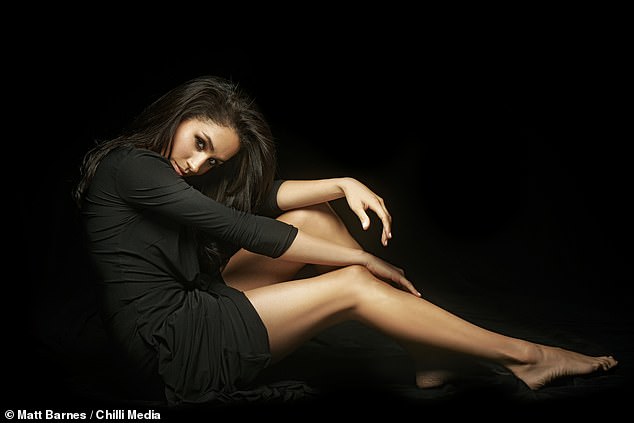 As an actress Meghan Markle (above) knows how to submerge her own personality, and how to produce any appropriate emotion – joy, concern, sincerity – to order

Meghan’s mother’s father Alvin even owned an antique store called ’Twas New. Her great aunt Dora was a schoolteacher. Another great aunt, Lillie, was a prosperous estate agent, eminent enough to be listed in the African-American Who’s Who.

Meghan’s father, Tom, was much more successful in the television industry than Harry’s poor old Uncle Edward. A lighting designer on shows such as Sesame Street and General Hospital, he has been nominated for eight Emmy awards, and has won one. One of his brothers works for the CIA, and the other is a bishop in the Eastern Orthodox Church of America.

Meghan went to a posh private school called The Little Red School House; Johnny Depp and the bassist for the Red Hot Chili Peppers both sent their daughters there, and Scarlett Johansson was a fellow pupil. From there, Meghan went to a Catholic private all-girls school, The Immaculate Heart, which used to rope in big Hollywood figures to help produce school plays like Annie, Into The Woods and Oedipus Rex, in all of which Meghan had leading roles.

She shone in every field, and was showered with awards at her graduation ceremony in the Hollywood Bowl, including The Bank of America Fine Arts Award and the Notre Dame Club of Los Angeles Achievement Award. It all makes the Windsors, with their sprinkling of GCSEs, look a touch thick.

Meghan went on to the private Northwestern University, whose alumni include 16 Nobel Prize laureates, 38 Pulitzer Prize winners and, in the showbiz fraternity, Warren Beatty, Charlton Heston and Jerry Springer.

Luckily, Meghan’s family were sufficiently well connected to pull a few strings on her behalf. Through her CIA uncle, she was given an internship at the US Embassy in Buenos Aires, and her father helped get her a small part in General Hospital.

For the past half-century or more, the Royal Family has been a successful branch of the entertainment industry. The Queen Mother was the consummate professional, able to ‘turn it on’ in public, and then turn it off again, once the curtain had gone down. ‘Her engagements, whether private or public, were like performances,’ wrote her biographer, Hugo Vickers. ‘Privately, there was less going on, since between these performances she rested.’

Meghan Markle is bound to bring a similar professionalism to her royal role. As an actress, she knows how to submerge her own personality, and how to produce any appropriate emotion – joy, concern, sincerity – to order.

Her training has been long and intensive. Though best known for playing Rachel Zane in Suits, she has played many other parts, from a serial killer to an insurance rep.

Suits has been running for 100 episodes, spread across seven seasons. Compared to the Royal Family, this is a limited run. Will Meghan get bored with such an interminable series, particularly as her own role in it will diminish with time? Harry has already slipped from third in line to the throne down to fifth. Once Kate’s next child is born, he will slip further, to sixth, and so on.

Before long, he will share a similar status in public life to the Earl of Wessex, which means that Meghan will be the equivalent of Sophie Wessex, or Tim Lawrence. For her, it will be a bit like joining a pantomime as the leading lady, only to find that, after only a few seasons, others have elbowed their way centre-stage and you are just part of the chorus.

Andrew Morton has rushed out an efficient, workmanlike biography of Meghan Markle. On page two he describes her as ‘the first bi-racial divorcee ever to marry a member of the British Royal Family’. Three pages later, he tries to make her even more niche by calling her ‘the first divorced bi-racial American to take her place in the House of Windsor’.

Does any of this matter any more? In 2004, Harry’s cousin, Lady Davina Windsor, daughter of the Duke and Duchess of Gloucester, married a Maori sheep-shearer called Gary, who had an 11-year-old son ‘from a previous relationship’. No one batted an eyelid. Harry’s father Charles is both divorced and married to a divorcee, and his Aunt Anne and Uncle Andrew are also both divorced.

Morton gives a broad thumbs-up to Meghan Markle. ‘At its heart,’ he says, dopily, ‘an old-fashioned story of local girl makes good’. She is tough, serious, conscientious, hard-working, and no fool.

She has had a broad range of jobs – she once worked in a frozen yogurt store called Humphrey Yogart – and is so skilled at gift-wrapping that she has taught it professionally. Her handwriting skills ensured that she was the official calligrapher for the invitations to the 2005 wedding of Robin Thicke to his actress bride Paula Patton.

A thoroughly modern person, Meghan makes no distinction between networking and philanthropy, humanitarianism and self-promotion, each skill shading into the other.

Is she, perhaps, a touch too sexy for her royal role? YouTube carries a handy medley of her raunchiest moments in Suits, one of which shows her straddled between filing shelves in 5in heels, going all the way with an eager colleague. This sort of thing was never part of the Queen Mother’s CV, but, then again, times have changed.

As Duchess Meghan cuts her 1,000th ribbon, and unveils her umpteenth plaque, will the crowds find their minds straying to these wonderfully vivid scenes?

Elsewhere, she brings to the Royal Family virtually everything that is expected, down to the requisite black sheep. As Fergie had her Major Ron, and Kate had her Uncle Gary, and the Queen had her Uncle Edward, so Meghan has her half-sister Samantha (formerly Yvonne), 17 years her senior, who used to dabble in black magic, dress as a goth and once drew the sign of the devil on a Bible with lipstick.

‘There is so much more to focus on in the world than shoes and handbags,’ Samantha tweeted bitterly, a few weeks ago. ‘Meghan Markle needs to practise what she preaches or change her speeches.’

Their father, Tom, has had his ups and downs, not least when he won $750,000 on the California state lottery in 1990, having picked numbers that included Meghan’s birthday.

Attempting to conceal his win from Meghan’s mother, he registered it in the name of a friend, who then ran off with the lion’s share. Three years later, he filed for bankruptcy. And what of Meghan’s ex-husband, a not-particularly-successful TV producer called Trevor Engelson? According to Morton, ‘He can barely contain his anger,’ turning to ‘cold fury when her name comes into the conversation’.

On the other hand, I suspect this fury may be directed more towards Morton than Meghan. ‘ “I have zero to say about her,” he said to enquirers.’

Let’s hope he stays that way, though even if he has to be dragged kicking and screaming from St George’s Chapel on the big day, I imagine we’ll all take it in our stride.

After all, what’s the Royal Family if it’s not showbiz?