Meghan Markle has said that she ‘was the most trolled person in the entire world in 2019’ as she and Prince Harry made their podcast debut for World Mental Health Day.

The Duke and Duchess of Sussex discussed the stigma surrounding the topic and ‘how we can all contribute to a healthier world: physically, mentally, emotionally and holistically’ with high school students from their Santa Barbara villa.

The podcast, entitled Teenager Therapy, describes itself online as ‘five stressed, sleep deprived, yet energetic teens sit down and talk about the struggles that come with being a teenager’.

The most recent episode starring Harry, 36, and Meghan, 39, went live this evening and saw the couple talk to hosts Gael, Kayla and Thomas about their own experience of mental health.

Meghan said that the impact of the pandemic had pushed people increasingly toward the internet which she claimed opened up a ‘vulnerability’ and a place for ‘disconnection’.

She said: ‘I can speak personally because I’m told that in 2019 I was the most trolled person in the entire world – male or female.

‘Now eight months of that I wasn’t even visible. I was on maternity leave or with a baby. But what was able to just be manufactured and churned out. It’s almost unsurvivable.’

She added: ‘That’s so big you can’t even think about what that feels like because I don’t care if you’re 15 or 25 if people are saying things about you that aren’t true what that does to your mental and emotional health is so damaging.

‘And so I think from my standpoint, and part of the work that we do from our own personal experience, being able to talk to people and understand that even though our experience is unique to us – and obviously can seem very different to what people experience on the day-to-day – its still a human experience and that’s universal.

The Duke of Sussex said: ‘I think putting your self-care as a priority is hugely important, because vulnerability is not a weakness, showing vulnerability in today’s world especially, is a strength.

‘We could certainly see that more from some of those global leaders, because we got ourselves into this very deep hole which we need to come out of.’

Harry praised the teenage hosts and the younger generation for their openness surrounding mental health and personal difficulties, later telling the podcast that he meditates.

He added: ‘Our situation is somewhat unique but then every single person’s situation is unique, it’s a different version of the same thing.

‘For Meghan, she said on a global scale, that’s what happened in 2019, but if you’re a young girl or young boy at school, that’s your world, so if you’re being attacked, or being bullied or whatever is online… it feels the same.’

The Duke and Duchess of Sussex recorded the special podcast with Teenager Therapy earlier this week, with the episode going live today to mark World Mental Health Day (pictured, the teenage hosts of the podcast) 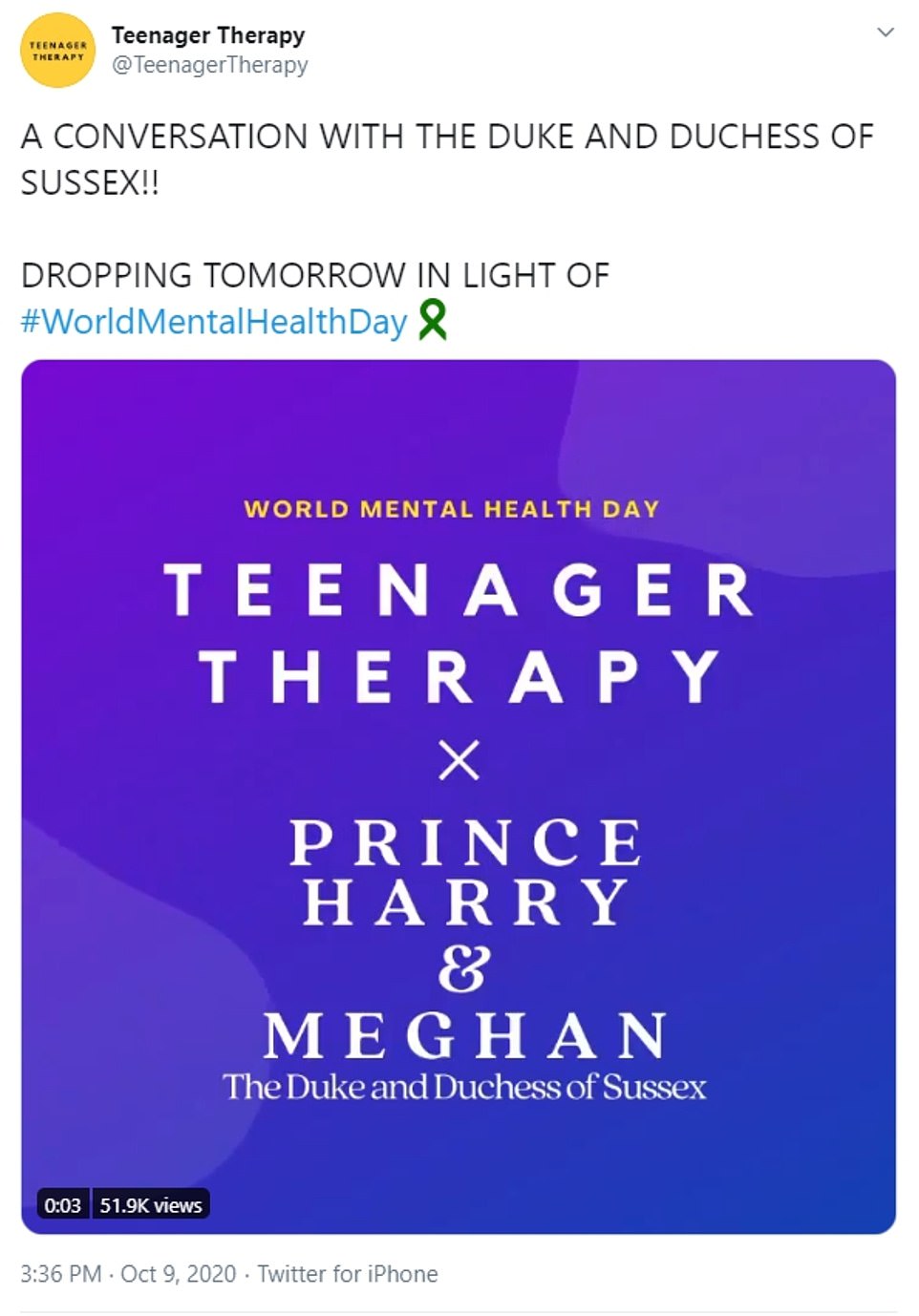 When asked about their recent activism, Harry said: ‘I think the way everything’s happening in the world right now, the moment that people start to think about mental health, immediately people think about a small group of people as opposed to every single one of us.

‘Rather than mental health being focused on, the people that are struggling, it needs to go much wider than that, and to the acceptance and the appreciation that every single one of us have mental health, and every single one of us have got stuff going on that we either need to talk about or that we need help with, or that we have some form of compassion and empathy for other people that are going through something similar.’

The Sussexes learned about the podcast – which usually features five students from Loara High School in Anaheim, Orange County – after reading a New York Times profile of the teenagers in July.

After listening to a few episodes of the series, they decided they wanted to support the teens’ work. They recorded the episode this week in their new hometown of Montecito, with all the participants wearing masks during the recording.

According to Hello! magazine, Prince Harry and Meghan led the group in deep breathing exercises ahead of the podcast in order to help sooth nerves.

Meanwhile when one of the young hosts, Gael, asked the couple what they would like to be called, the Duke told him ‘anything is fine’, to which Gael decided to call him ‘Big H’. 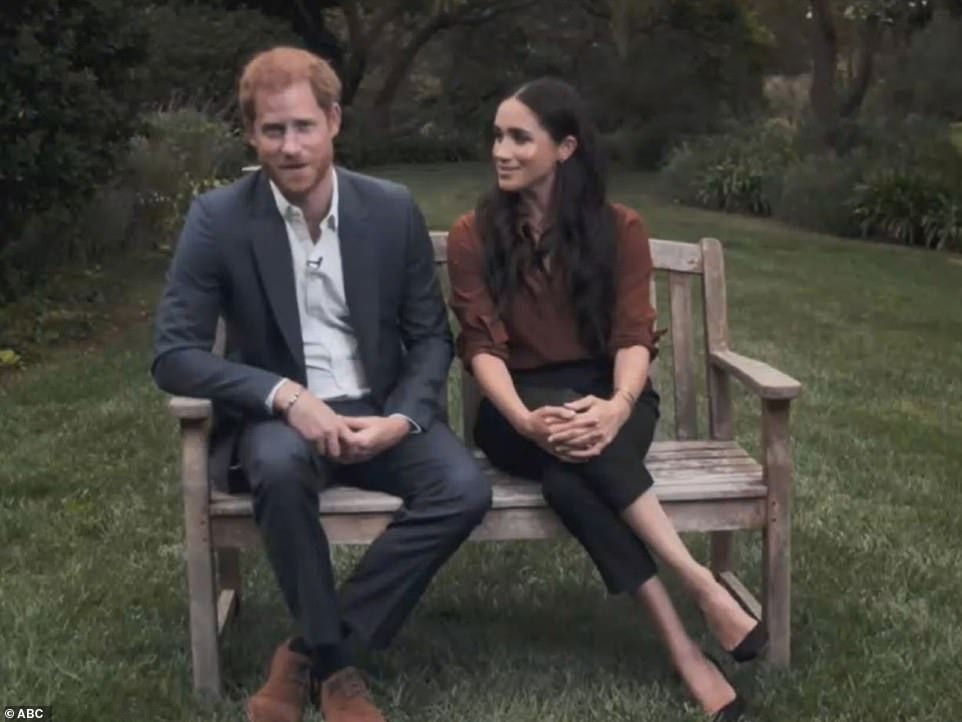 Prince Harry, 36, and Meghan Markle, 39, already have some experience in podcasts and radio appearances. Pictured during a recent video shared to encourage young people to vote in the upcoming US elections

The Duke has long been open up about his struggles with mental health, and revealed he needed counselling after the death of his mother, Princess Diana.

It was announced last year that Prince Harry was partnering with Oprah Winfrey as co-creators and executive producers of a forthcoming mental health documentary series for Apple.

The multi-part documentary series will focus on both mental illness and mental wellness, and aims to inspire viewers to have an honest conversation about the challenges they face.

Harry has previously opened up about his own battle with depression, revealing that he was ‘very close to a complete breakdown on numerous occasions’.

Speaking in 2018, he said: ‘I started to have conversations and actually all of a sudden this grief that I have never processed started to come to the forefront and I was like, there is actually a lo of stuff here that I need to deal with.

‘For me personally, my brother, you know, bless him, was a huge support to me. He kept saying ‘This is not right, this is not normal, you need to talk to someone’.’

Their new podcast appearance comes weeks after reports suggested the Duke and Duchess were set to be offered a seven figure deal to produce podcasts for Spotify.

The streaming giant, which is worth £22billion, are hoping to sign the royal couple following the success of The Michelle Obama podcast which has been a huge ratings hit.

Sources told the Mirror that money is ‘no object’ for Spotify and Meghan would be able to ‘more or less name her price’.

An insider said: ‘The Duke and Duchess have been on their hit list for a while and a detailed proposal is set to be presented to Meghan’s US agent in a matter of weeks.’ 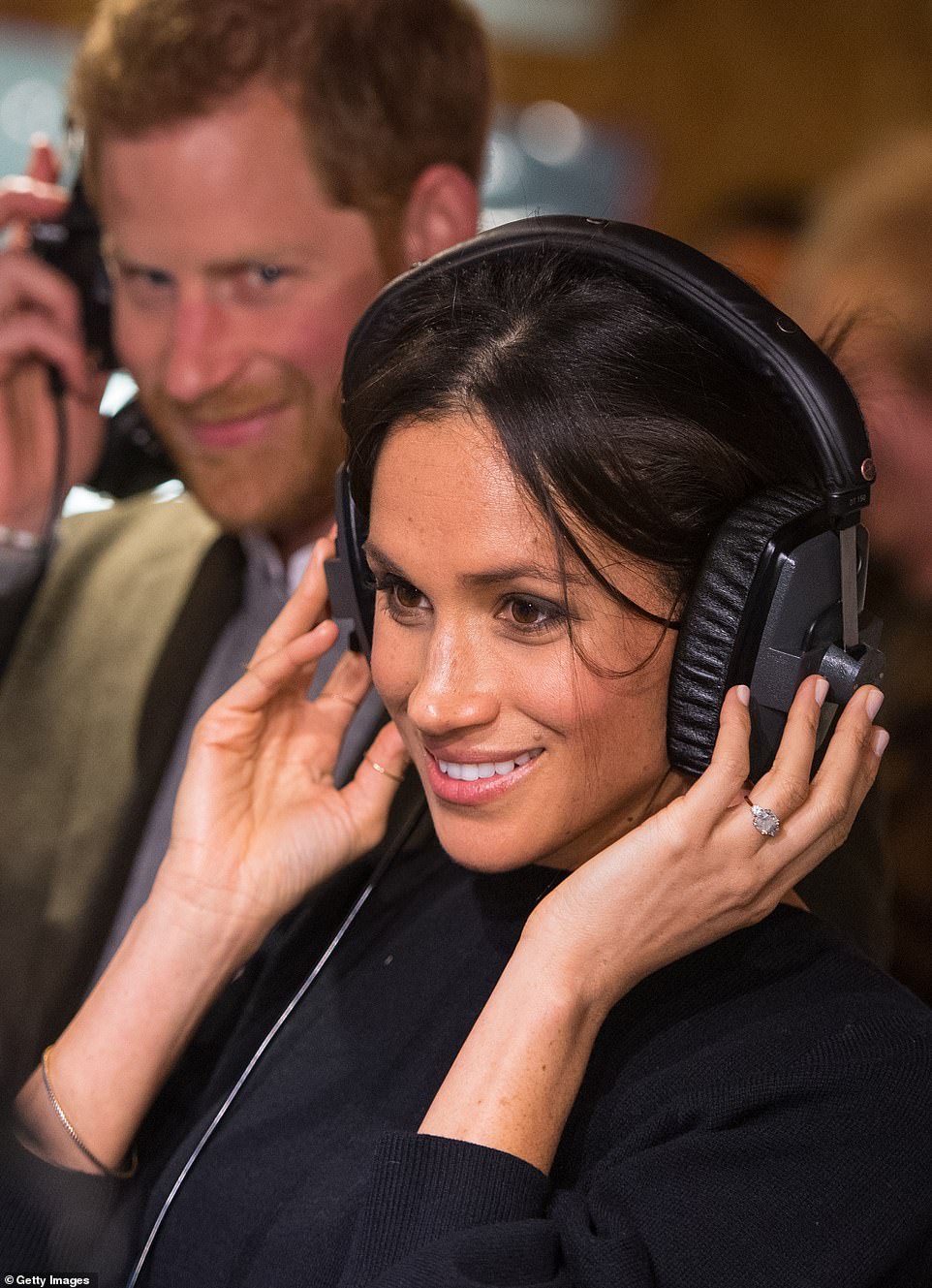 Their podcast debut comes weeks after rumours emerged that Prince Harry and Meghan were set to sign their own seven figure deal to produce podcasts for Spotify (pictured, while visiting Reprezent 107.3FM in Brixton in January 2018)

Rumours of Harry and Meghan seeking to gain a foothold in Hollywood have run rampant ever since the couple announced their plans to quit as senior royals, seek financial independence and move to North America in January.

The couple, who are breaking away from the monarchy to earn their own money in the US, have had to ditch using Sussex Royal as their brand name.

The Sussexes already have some experience in podcasts and radio appearances.

The couple’s second ever engagement as a couple was a visit to Reprezent 107.3 FM in Brixton, a 24-hour underground music station.

Meanwhile in 2017, Prince Harry guest edited BBC Radio 4’s Today show, while has a starring role in a new Netflix documentary Rising Phoenix, which was released on Wednesday.

Earlier this week Harry and Meghan were spotted enjoying a rare evening out with close friends David Foster, a music producer, and actress Katharine McPhee, who recently announced they are expecting a baby.

On Sunday, the couple will join 23-year-old activist Malala Yousafzai for a video chat to celebrate this year’s International Day of the Girl.

They are expected to discuss the barriers currently facing more than 130 million girls around the world who are not currently receiving an education, and what is being done to help them.

Today it was reported Harry could face a scolding by the Queen amid concerns over his public comments about US politics as royal staff prepare for him to return to the UK, according to reports.

It is thought that Palace staff have been told to ready Frogmore Cottage for the imminent return of the duke – without mention of Meghan Markle.

The Queen, 94, is likely to meet with Harry at her ‘HMS Bubble’ at Windsor after she returned in order to resume audiences and small engagements.