Meghan Markle and Prince Harry must choose whether they want to be part of the ‘celebrity world or the royal one,’ a royal biographer has claimed.

Speaking to the Telegraph, Angela Levin told how she can’t imagine the Duchess of Sussex, 38, ‘quietly taking a back seat’ as she urged the couple to consider their ‘increasingly confused’ royal role.

The royals have hit the headlines in recent weeks following a backlash after allegedly going on four trips by private jet in 11 days – despite preaching about environmental issues.

Meghan Markle and Prince Harry need to decide if ‘their future is going to be immersed in the celebrity world or the royal one’, royal expert Angela Levin has claimed. Pictured during an official visit to the Joff Youth Centre in Peacehaven in October 2018

‘One can’t imagine Meghan quietly taking a back seat, she is bursting with projects and ideas of all sorts, and Harry’s hard-partying days are far behind him.’

The royal biographer went on to label the pair as ‘ambitious, passionate philanthropists’ who face the ‘challenge’ of using their privileged position to ‘make change without appearing to take advantage of it’.

However, she expects the couple’s upcoming tour of South Africa – when they will take three-month-old Archie to visit Angola, Malawi and Botswana – to be a ‘huge success’.

But, she added, this may be a good time for them to consider which direction they wish for their future to take. 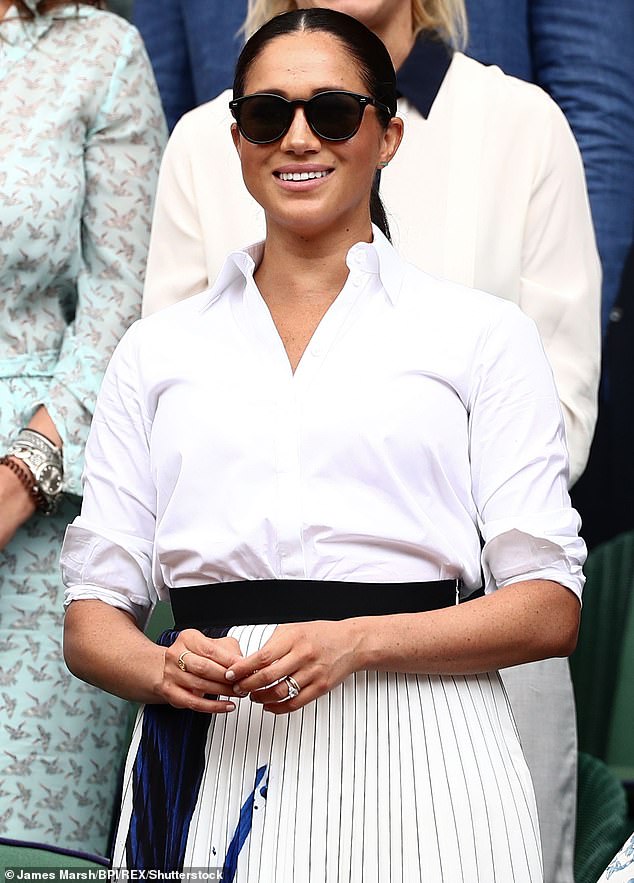 Angela claimed she ‘can’t imagine Meghan quietly taking a back seat’ as she urged the couple to consider their ‘increasingly confused’ royal role. Pictured: Meghan at Wimbledon in July

Earlier this week, Harry and Meghan became embroiled in a hypocrisy row after being pictured leaving the south of France in their fourth trip by private jet in 11 days.

This was a move Angela claimed may have ‘crossed that celebrity line’, as Harry’s brother William, who is second in line to the throne, was seen boarding a budget airline flight from Norwich to Aberdeen in the same week.

The Duke of Cambridge, 37, was accompanied by his wife Kate, 37, and children George, six, Charlotte, four, and Louis, one.

But the Duke and Duchess of Sussex, who have been outspoken on environmental issues in recent months, generated an estimated seven times the emissions per person compared to a commercial flight when flying home from Nice last weekend. 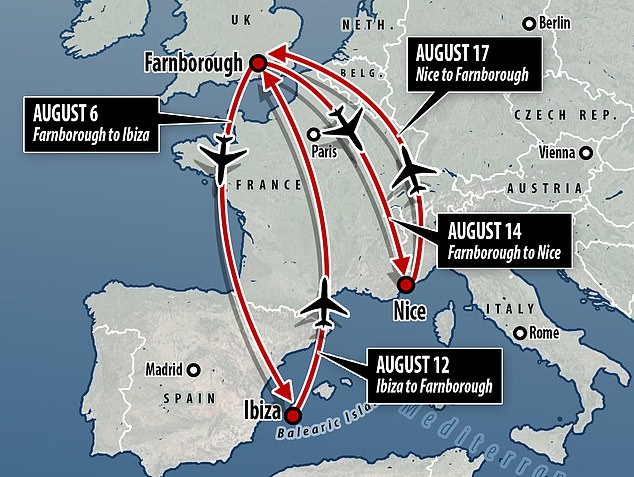 Earlier this week, Harry and Meghan became embroiled in a hypocrisy row after being pictured leaving the south of France in their fourth trip by private jet in 11 days 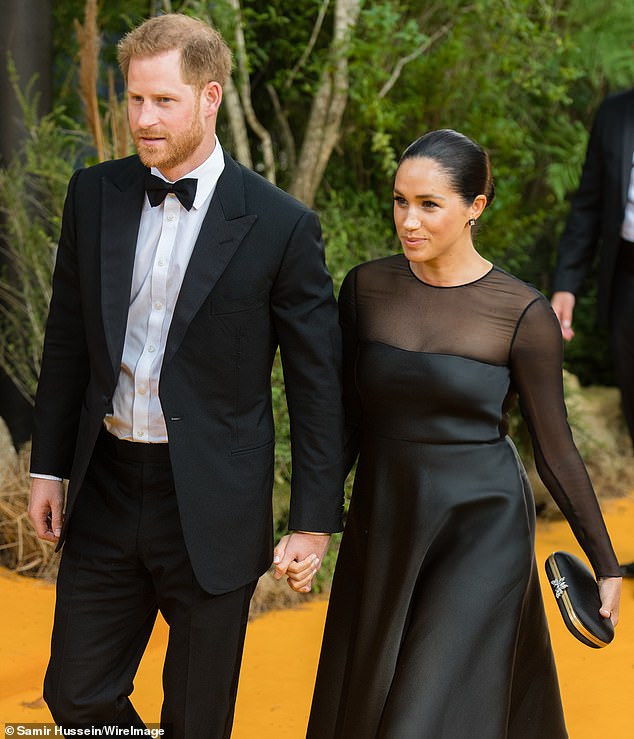 Angela claimed the multiple trips by private jet may have ‘crossed that celebrity line’, as Harry’s brother William was seen boarding a budget airline flight from Norwich to Aberdeen in the same week. Pictured, the Duke and Duchess of Sussex attend ‘The Lion King’ European Premiere at Leicester Square on July 14, 2019 in London

Photographs of the royal couple and their son Archie showed the family stepping on board a Cessna 680 Citation Sovereign jet on August 17 at about 3pm local time, having arrived in France three days earlier.

The couple had visited Sir Elton John’s £15million palatial home of Castel Mont-Alban, overlooking the Promenade des Anglais, during their holiday to the French Riviera.

Elton later confirmed he had paid for the Duke and Duchess to fly to and from his mansion by private jet for a holiday ‘inside the safety and tranquillity of our home’.

The 72-year-old singer claimed he had ensured the couple’s flights were carbon neutral by making the ‘appropriate contribution’ to a carbon footprint fund.

The comments come as it was revealed Meghan celebrated her 38th birthday in a luxurious £108,000-a-week villa in Ibiza featuring a 50-metre infinity pool.

Meghan, Harry and Archie enjoyed a six-day stay at the Sa Calma villa on the exclusive Vista Alegre estate after arriving by private jet on August 6.

The villa lies close to the picturesque village of Es Cubells on the south-western coast of the island. 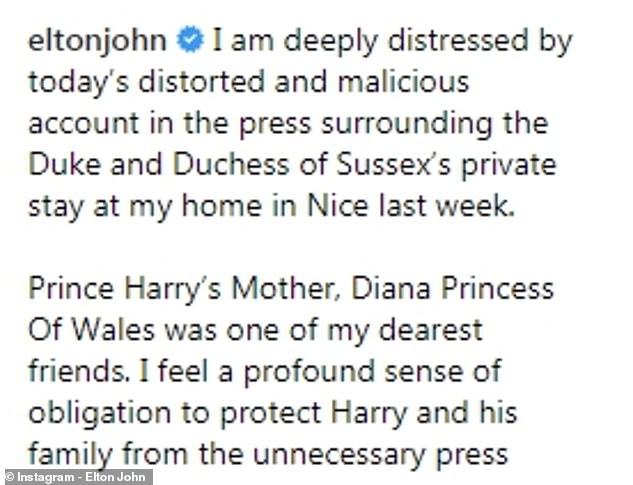