The Duke and Duchess of Sussex have shown off their photography skills – with two of their pictures shared on the social media pages.

A stunning shot taken by Harry as he and Meghan travelled by helicopter to Abel Tasman National Park, New Zealand, was posted onto Kensington Palace’s official Instagram page today.

Meanwhile, a striking shot of Harry, 34, practising his speech for the Invictus Games closing ceremony in Sydney – taken by wife Meghan, 37 – was also shared onto the couple’s official Twitter account on Saturday.

These are the first photographs taken personally by the couple to be shared with the public, since Meghan deleted her Instagram account shortly after their engagement announcement.

It comes after images taken by Duchess of Cambridge, who is a keen photographer, often shares pictures she has taken of her young children with the public.

A picture taken by Harry showing a lake and the hills around it, was shared on Instagram Stories today, captioned: ‘Traveling to the beautiful Abel Tasman National Park #royalvisitNZ’

A photography credit revealed the image was taken by the royal himself while on board a helicopter with Meghan to the national park.

However, royal watchers noticed that the US spelling, ‘traveling’ was used in the caption, rather than ‘travelling’ which is more commonly used in the UK – perhaps due the influence of Harry’s American wife. 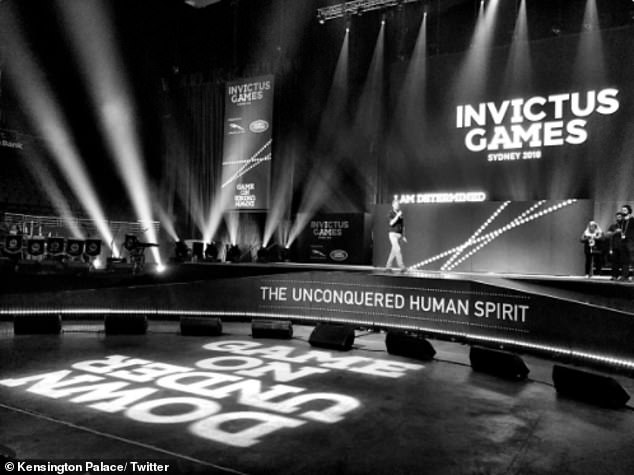 A black-and-white shot of Prince Harry practising his Invictus Games speech, taken by Meghan, was shared on the Kensington Palace Twitter page on Saturday

Meanwhile, a black-and-white shot showing Harry practising his speech for the Invictus Games closing ceremony at the Qudos Bank Arena, taken by Meghan, was shared on the Kensington Palace Twitter account on Saturday.

The caption read: ‘Getting ready for tonight’s @InvictusSydney closing ceremony, where we will celebrate the #InvictusGames competitors, and their friends and families.

‘The Duke and Duchess of Sussex will both speak at the ceremony this evening. #IG2018’

The photography credit revealed that the picture was taken by Meghan herself, rather than a royal aide. 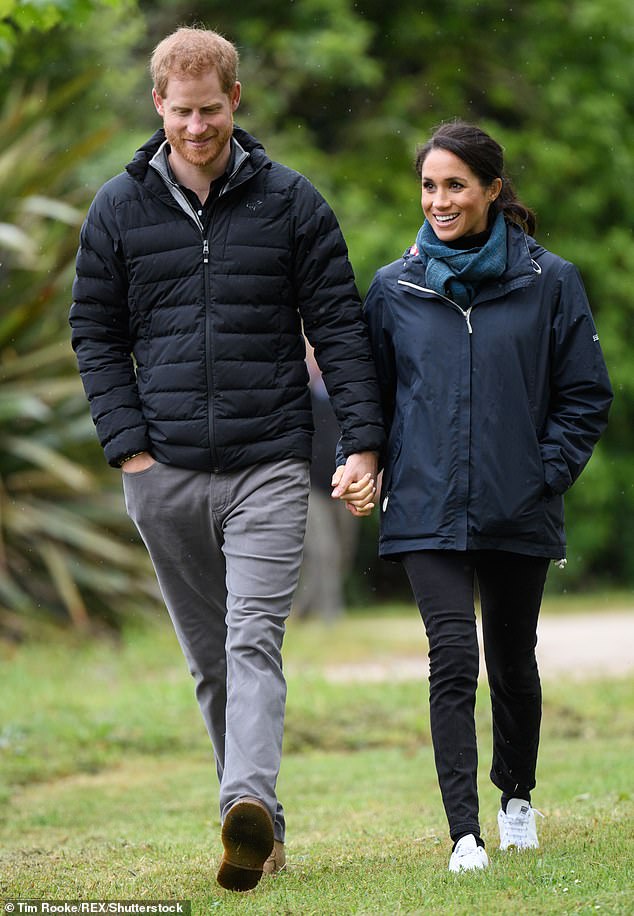 Harry, 34, and Meghan, 37 are currently in New Zealand for the final stage of their royal tour. They are pictured here at Abel Tasman National Park

The Duchess is used to social media, having been a regular Instagram user before joining the royal family.

However, last week, Meghan revealed that she has found it ‘freeing’ to no longer be online.

Earlier today, she warned about the negative impact that social media could have on young people.

Speaking to staff and volunteers for an online youth programme at the Maranui Café, she said:  ‘You see photos on social media and you don’t know whether she’s born with it or maybe it’s a filter.

‘Young people find it so difficult. Your judgement of your sense of self worth becomes really skewed when it’s all based on likes.’