Meghan Markle begged her father to stop ‘victimizing’ her after wedding

Meghan Markle was so upset by her estranged father’s repeated attacks in the media that she wrote him a letter begging him to stop ‘victimizing’ her, say friends.

Five ‘close friends’ of the Duchess, who have not revealed their names, told People that Meghan had penned the letter to her dad, Thomas Markle, shortly after her wedding to Prince Harry.

‘I have one father. Please stop victimizing me through the media,’ she wrote to Thomas after he gave a flurry of negative press interviews about his daughter.

The five female friends, reported to be in Meghan’s inner most circle, say Thomas Markle responded by asking Meghan for a photo shoot.

Meghan Markle (pictured with her husband Prince Harry on February 1) was so upset by her estranged father’s repeated attacks in the media that she wrote him a letter begging him to stop ‘victimizing’ her, say friends

‘I think she will always feel genuinely devastated by what he has done,’ they told People.

Thomas Markle’s criticism of his daughter’s lack of contact is especially galling because her friends say he knows exactly how to reach her – but has never tried.

‘He knows how to get in touch with her,’ added the longtime friend. ‘He’s never called; he’s never texted. It’s super painful.’

They continued that Meghan had never really had a relationship with her half-brother Thomas Markle Jr., and half-sister Samantha Markle – who has been particularly critical of Meghan in the press.

‘They have been made to appear as siblings who had this falling out, and that’s not the truth at all,’ said the friend, explaining that both Thomas Jr. and Samantha were in their teens by the time Meghan was born.

‘They were not a part of her life.’

They also hit out at reports that Meghan had become ‘difficult’ since moving to the palace, and rejected rumors she was feuding with her sister-in-law Kate Middleton.’

‘She is the same person,’ they said, ‘though everything around her has changed.’

‘There is nothing behind the feud with Kate. It’s completely untrue. ‘

A friend and former costar from LA, said that Meghan preferred a fairly simple life. 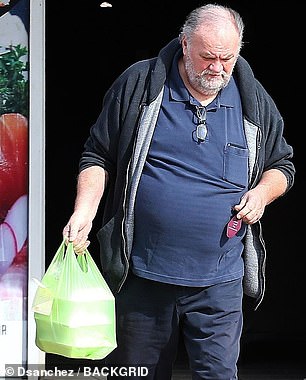 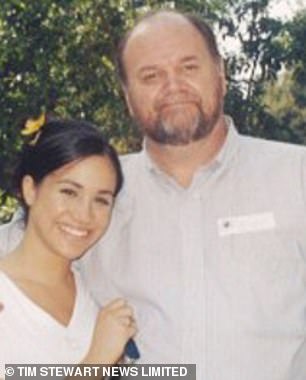 Friends say Thomas Markle (left on February 1, and right with his daughter) responded by asking Meghan for a photo shoot

She described visiting Meghan and Harry’s cottage in Windsor, where the former Suits star was more than happy to get her hands dirty.

‘We had a couple of days together recently,’ they told the magazine. ‘Her husband was out of town on work. In the room she made up for me, there was a candle lit by the bed, slippers and a robe. We were the only two in the house. It was our time.

They insist that the public portrayal of the ‘difficult Duchess’ could not be further from the down-to-earth, ‘selfless’ friend they know.

They also had concerns about what the stress of the negative press, often stirred up by Meghan’s own estranged family, was doing to her and the baby.

‘We want to stand up against the global bullying were seeing (against Meghan), ‘ the friends said.

It’s unclear who the friends are. 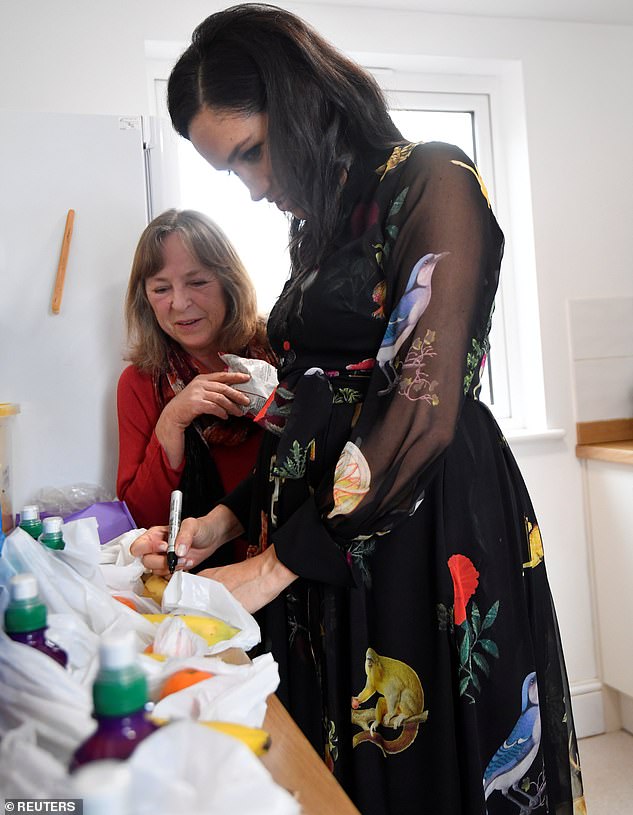 Meghan appears to be enjoying her pregnancy during her royal engagement with Prince Harry. She was pictured last week during a visit to One25, a charity which helps female sex workers in Bristol

Fruity! Messages written on fruit by Meghan, Duchess of Sussex when she was helping to prepare food parcels to go in the charity outreach van, are pictured at One25 in Bristol, England, that said ‘you are special, strong and brave’ are seen

Thomas Markle gave yet another interview about his daughter in December – the fourth interview since the fall-out with Harry and Meghan after he staged paparazzi pictures shortly before the couple’s wedding in May.

He then suffered two heart attacks, preventing him walking his daughter down the aisle at St George’s Chapel, Windsor.

‘I have been frozen out and I can’t stay silent,’ he said. ‘I have made dozens of attempts to reach my daughter via text and letters, but she and Harry have put up a wall of silence. They have done what they once told me not to do – they are believing everything negative that has been written about me. So I am reaching out to them, once again, to try to correct the lies and get the truth out there.

‘Everyone says, why don’t I just shut the f*** up? That Meghan can’t speak to me because I’ll give away secrets. But that’s bull****. I’ve been accused of every terrible thing you can think of. In one magazine they had an awful story about Prince Charles right beside one about me. But no one is shunning Prince Charles.’

Meanwhile, Meghan appears to be enjoying her pregnancy during her royal engagement with Prince Harry.

An adorable video clip taken last week appears to show Meghan feeling Baby Sussex getting active in the womb  during a tour of the Bristol Old Vic theater last Friday.

The Duchess is expecting her first child in April and is now well into the third trimester, when movements from babies in the womb become much stronger.

The whistle-stop tour of the West Country city saw the parents-to-be also visit a sex worker charity where Meghan wrote messages of hope on bananas, which are distributed across the city to sex workers.