The Duchess of Sussex gave birth to her first child Archie at the private Portland Hospital in Westminster, her son’s birth certificate revealed this afternoon.

Meghan, who gave her name as ‘Rachel Meghan Her Royal Highness The Duchess of Sussex’, listed her job as ‘Princess of the United Kingdom’ – the same as Kate has done previously – as her son’s birth was registered by her husband the Duke of Sussex today.

Meghan’s official title is the Duchess of Sussex, but when she married Harry, she technically became ‘Her Royal Highness, Princess Harry of Wales’ – which is why she is a ‘princess’ on the document.

But despite this, she will never be Princess Meghan as she married into the royal family and was not born into it. Under archane rules, she requires ‘royal blood’ and the Queen would have to reverse centuries of tradition to alter this.

Archie’s birth certificate confirmed the place of birth as the Portland Hospital and dismissed speculation that Meghan, who married Harry a year ago on Sunday, had a home birth in the sanctuary of Frogmore Cottage – the Sussexes’ home on the Windsor Estate.

Archie Harrison Mountbatten-Windsor, the seventh in line to the throne and an eighth great-grandchild for the Queen and Duke of Edinburgh, arrived at 5.26am on May 6, weighing 7lb 3oz.

Until now, the duke and duchess have been trying to keep the birth location private and details of their medical staff a secret. But the certificate from the City of Westminster register office revealed some key details.

It confirms Archie is the baby’s full name – rather than being short for something else such as Archibald – and that Meghan’s first name is Rachel. Meanwhile, it reveals the birth was registered today, 11 days after Archie was born.

It has always been unclear whether the Duchess decided to be known by her middle name – Meghan – from a young age or whether she adopted it as a stage name when she was starting her TV career, like many actors decide to do.

Coincidentally, her real first name is shared by the character she played on Suits – Rachel Zane – which made her famous.

The certificate was typed out in the same style as that of Prince Louis in April 2018, after the documents for Princess Charlotte and Prince George were handwritten, which led to many people making fun of the poor handwriting of the registrar.

The birth certificate of Archie Harrison Mountbatten-Windsor, son of Prince Harry and Meghan, was revealed this afternoon 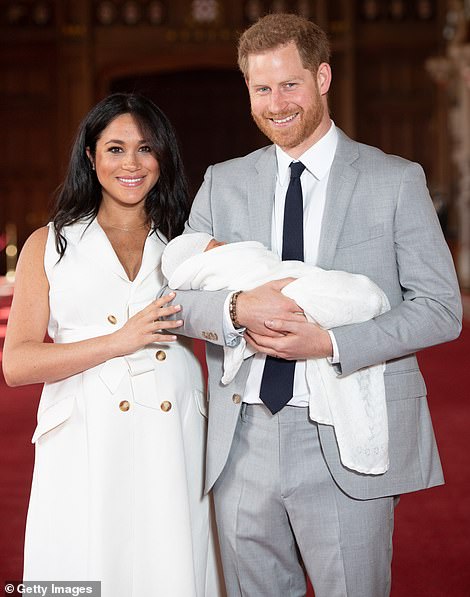 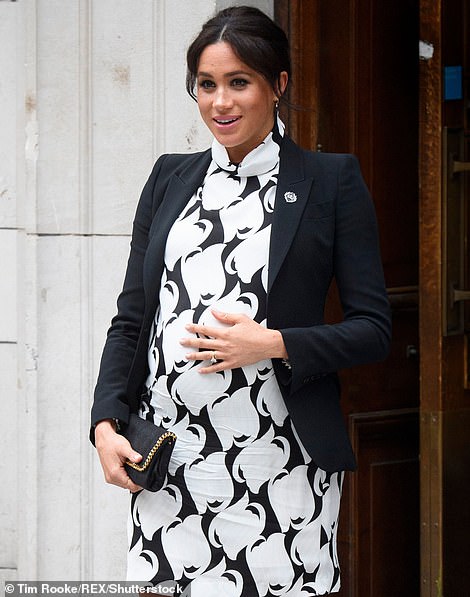 A spokesman for The Portland Hospital said today: ‘Huge congratulations to the Duke and Duchess of Sussex on the birth of baby Archie.For reasons of patient confidentiality, we are unable to provide any comment or information.’

Harry announced to the world his wife had given birth to a boy and could not hide his happiness at becoming a father for the first time, to a baby he said was ‘absolutely to-die-for’.

The duke was at his wife’s side during the birth and he later confessed he had only had a few hours’ sleep, suggesting Meghan had spent much of the night in labour.

It was initially unclear where Archie had been born but the Daily Mail confirmed Meghan went to the luxury private hospital.

Archie is believed to be the first mixed-race child born to a senior member of the royal family in centuries, and is a reflection of modern Britain with its culturally diverse population.

Harry, 34, and Meghan, 37, became engaged following a whirlwind 16-month romance after going on a blind date in London.

The protective parents want to ensure their son grows up away from the limelight.

Harry, who knows only too well the pressure that comes with being a Windsor and once admitted he ‘wanted out’ of the royal family, is set on allowing his son to have as normal a life as possible.

Royal protection officers will always be close by, while help from housekeepers and aides will be the norm, but Harry and Meghan will be hands-on parents. 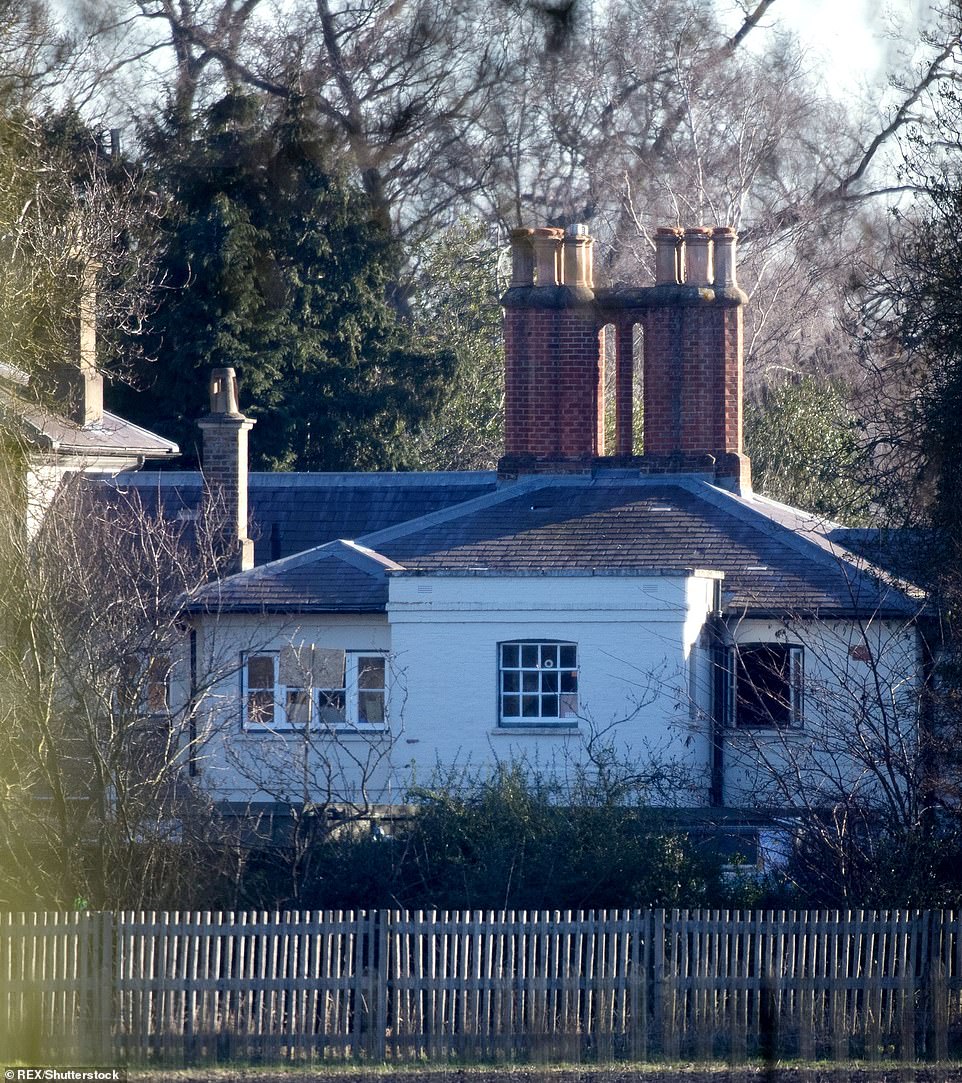 The happy couple later returned home to Frogmore Cottage (above) in Windsor, Berkshire

The royal baby, who was not given a courtesy title, met his uncle and aunt, the Duke and Duchess of Cambridge, for the first time on Tuesday, having already spent time with his maternal grandmother Doria Ragland and his royal great grandparents, the Queen and Duke of Edinburgh.

Meghan was thought to have wanted a home birth after rejecting a stay at the Lindo Wing in London’s Paddington where the Duchess of Cambridge famously posed with her three newborns.

But more than a week overdue, she was forced to have Archie in hospital – and the birth certificate revealed today that this was the Portland in central London.

Other famous mothers who have had their babies there include Victoria Beckham, Liz Hurley and Jools Oliver.

Sarah Ferguson, the Duchess of York also gave birth to Princess Eugenie and Beatrice at the private hospital. 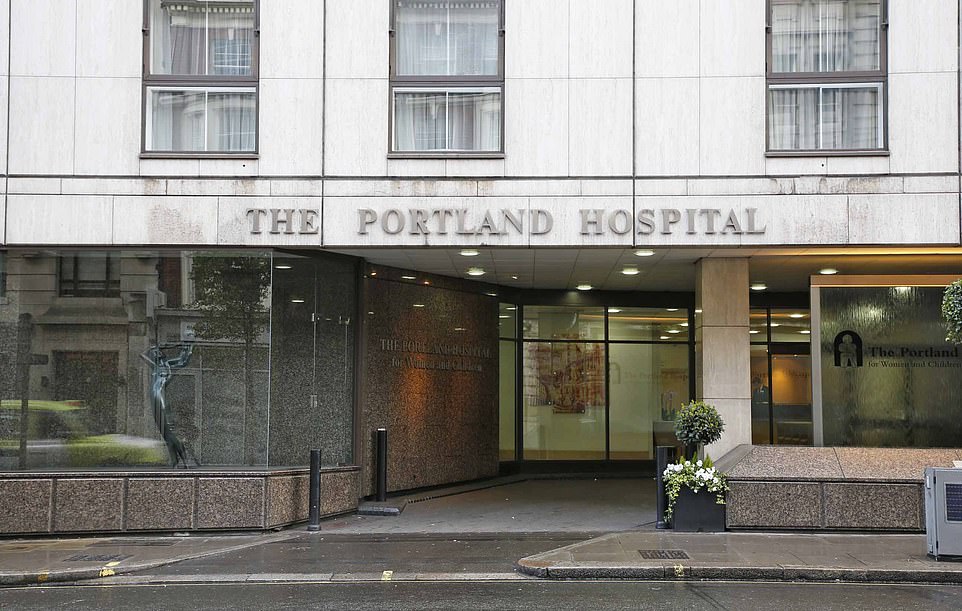 Extended stays at The Portland in central London can rack up bills of £1,800 a night

Why the Duchess of Sussex is not known as ‘Princess Meghan’

Since marrying Prince Harry in May last year, Meghan’s official title has been Her Royal Highness Princess Henry of Wales.

But the rules governing royal titles forbid the Duchess of Sussex from adopting the name Princess Meghan.

This is because tradition dictates that only those with royal blood are allowed to put ‘prince’ or ‘princess’ in front of their first name.

For example, the daughters of Prince Andrew are known as Princess Eugenie and Princess Beatrice because they are in the royal line of succession, rather than marrying in to the family.

Diana was given the title Princess of Wales as a courtesy but was never afforded the name ‘Princess Diana’ despite being referred to in this way by most of the public.

It is understood Meghan’s mother Doria went with Harry and her daughter to the hospital overnight.

Within hours of becoming new parents the three returned to the couple’s new home at Frogmore Cottage in Windsor.

Prince Harry, 34, then announced the birth in a beaming address in Windsor.

He said: ‘I’m very excited to announce that Meghan and myself had a baby boy earlier this morning, a very healthy boy. Mother and baby are doing incredibly well. It’s been the most amazing experience I could ever have possibly imagined.

‘How any woman does what they do is beyond comprehension, but we’re both absolutely thrilled and so grateful to all the love and support from everybody out there. It’s been amazing, so we just wanted to share this with everybody.’

Asked if they had any names yet, he said: ‘Still thinking about names. The baby is a little bit overdue, so we’ve had a little bit of time to think about it.

‘That’s the next bit, but for us I think we will be seeing you guys in probably two days’ time as planned as a family to be able to share it with you guys and so everyone can see the baby.’

Asked what it was like to be present for the birth, he laughed and said: ‘I haven’t been at many births.

‘This is definitely my first birth. It was amazing, absolutely incredible, and, as I said, I’m so incredibly proud of my wife.

‘As every father and parent will ever say, you know, your baby is absolutely amazing, but this little thing is absolutely to-die-for, so I’m just over the moon.’

Inside the private Portland Hospital where Meghan gave birth to Baby Sussex: The luxury £20,000 maternity ward where mothers get 24-hour room service, champagne and lobster

By Lara Keay for MailOnline

The Duchess of Sussex, 37, was understood to have wanted a home birth after rejecting a stay at the Lindo Wing where the Duchess of Cambridge famously posed with her three newborns.

But more than a week overdue, The Mail was told she was forced to have Baby Sussex in hospital at The Portland in central London. 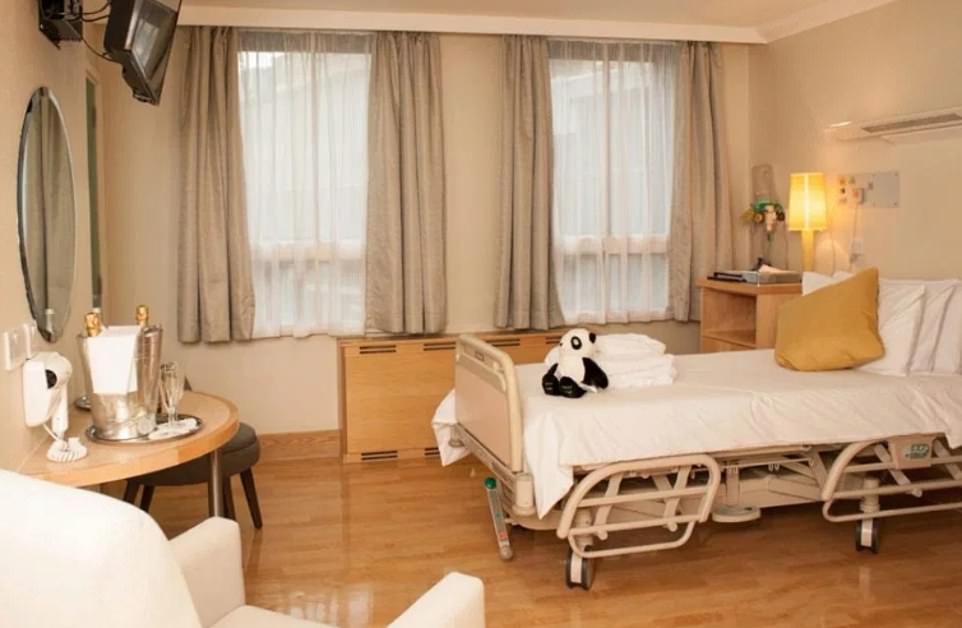 Meghan originally wanted a home birth, but being more than a week overdue she was forced to give birth in hospital – The Portland in central London, where an exclusive suite is pictured 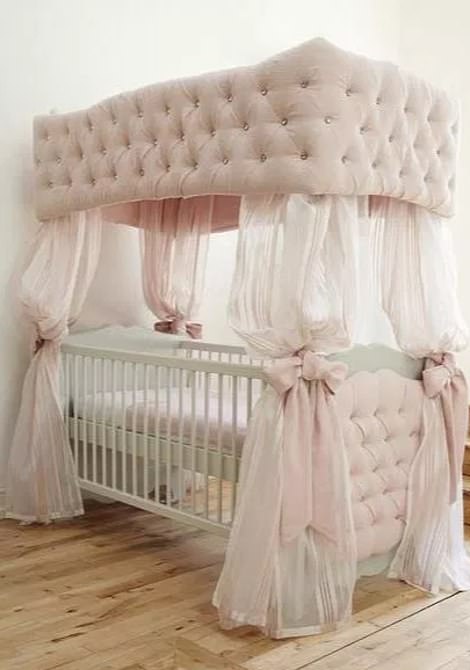 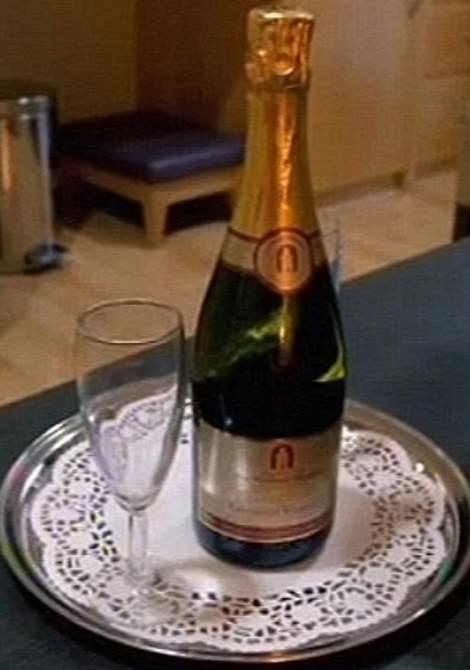 At The Portland, babies are treated to £3,500 Moses baskets designed by luxury furniture brand Dragons of Walton Street 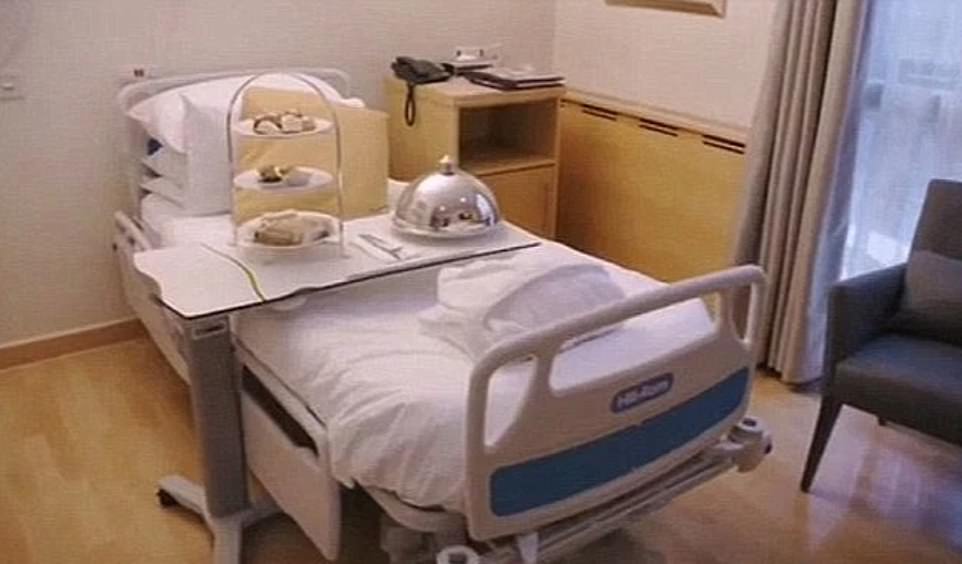 New parents are offered a meal to celebrate the safe delivery of their child, with a menu that boasts lobster, oysters, foie gras, champagne and afternoon tea options (pictured) 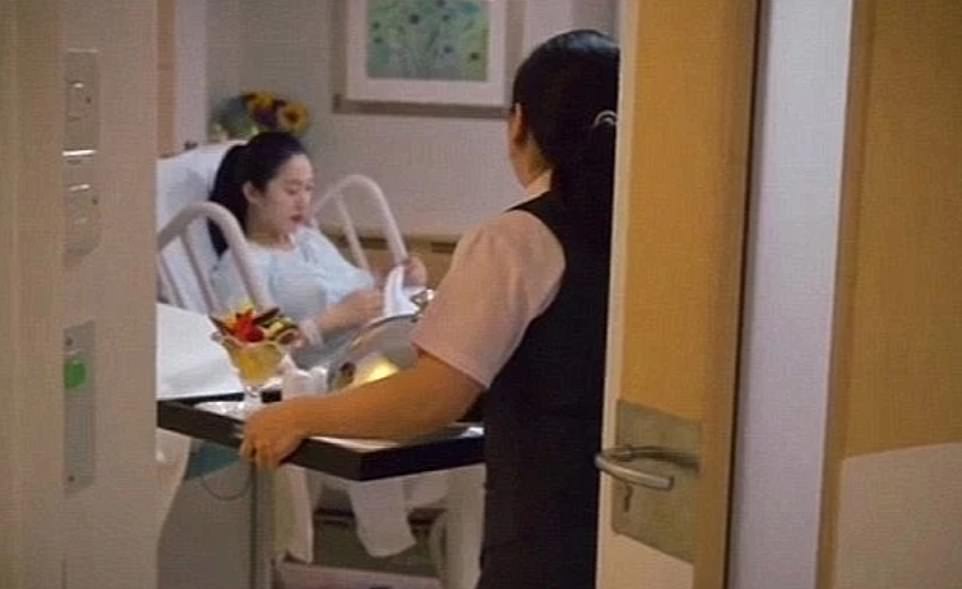 Other famous mothers who have had their babies there include Victoria Beckham, Liz Hurley and Jools Oliver.

Sarah Ferguson, the Duchess of York also gave birth to Princess Eugenie and Beatrice there.

New parents are offered a meal to celebrate the safe delivery of their child, with a menu that boasts lobster, oysters, foie gras, champagne and afternoon tea options – all served on silver platters.

Extended stays The Portland can rack up bills of £1,800 a night, a far cry from Frimley Park NHS Hospital in Surrey where Meghan and Harry were rumoured to have gone if her hopes of a home birth were dashed.

While Frimley Park was rated good, with some outstanding aspects, by the Care Quality Commission, it can’t compete with the luxury ‘goodie bags’ new mothers are handed when they leave The Portland.

There are reported to be 50 full-time midwives and nursery nurses on duty at all times, happy to change nappies and ‘check in’ on newborns while their exhausted parents try to get some sleep.

From the place of birth, to whether they have been hand-written or typed – there are several notable differences between the birth certificates of baby Archie and his cousins.

Revealed today for the first time, one glaring difference reveals how the Duchess of Sussex gave birth to her first child at a luxury private hospital in London – The Portland in Westminster.

The Duchess of Cambridge on the other hand, gave birth to all three of her children at the private Lindo Wing of St Mary’s Hospital in Paddington where she faced a mass photocall following the birth. 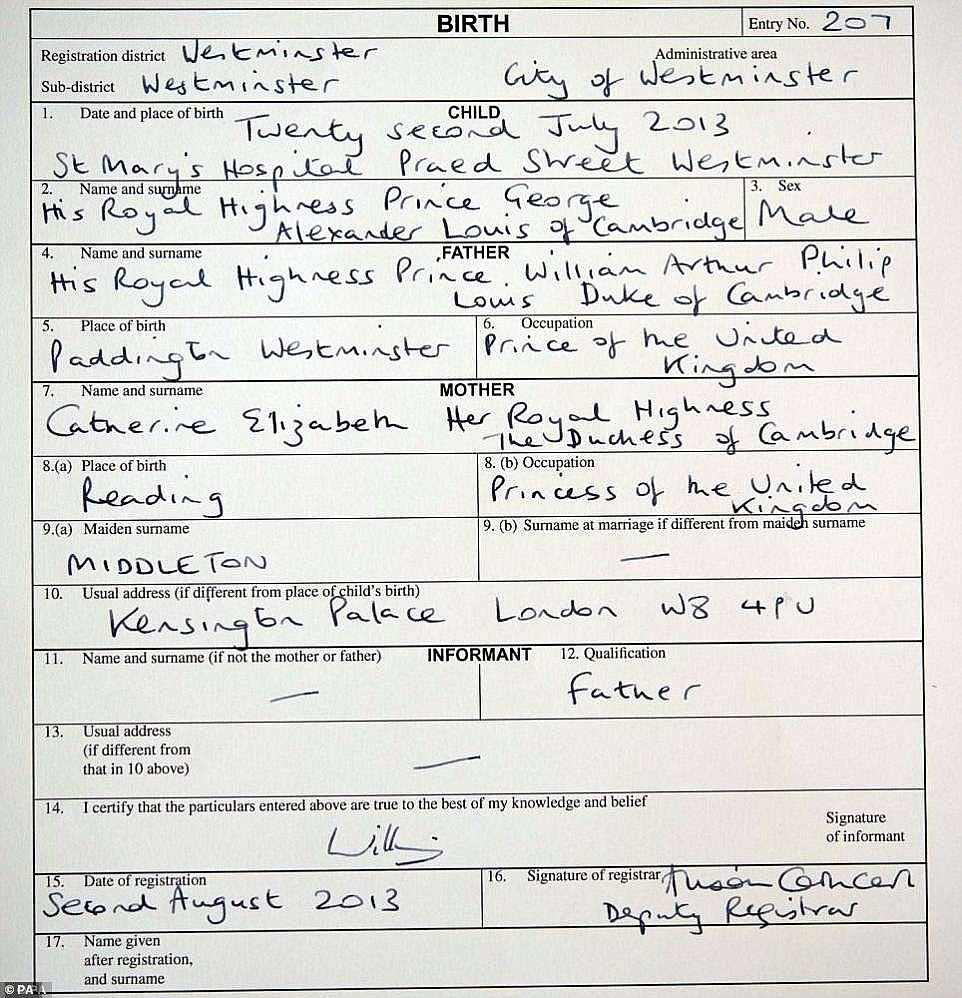 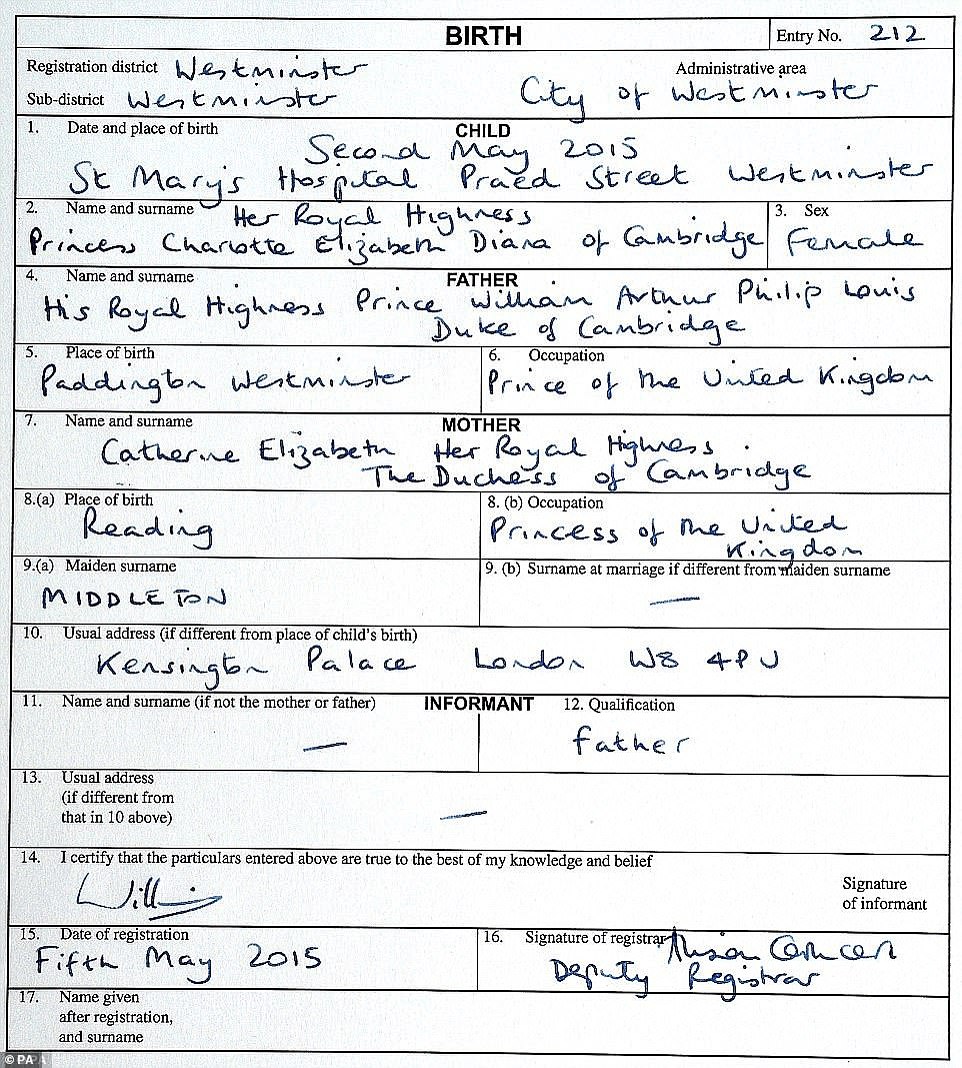 It is among several noticeable differences between baby Archie’s certificate and that of his cousins Prince George, five, Princess Charlotte four, and Prince Louis, one.

She revealed how she had received death threats over her ‘messy handwriting’ on Prince George’s form in 2013, admitting she became ‘flustered’ when writing on the document while sitting next to Prince William.

In a 2014 interview with the Daily Mail, she said: ‘I got death threats. One person said their cat had better handwriting, someone called for me to be fired and someone even said I was illiterate.’ 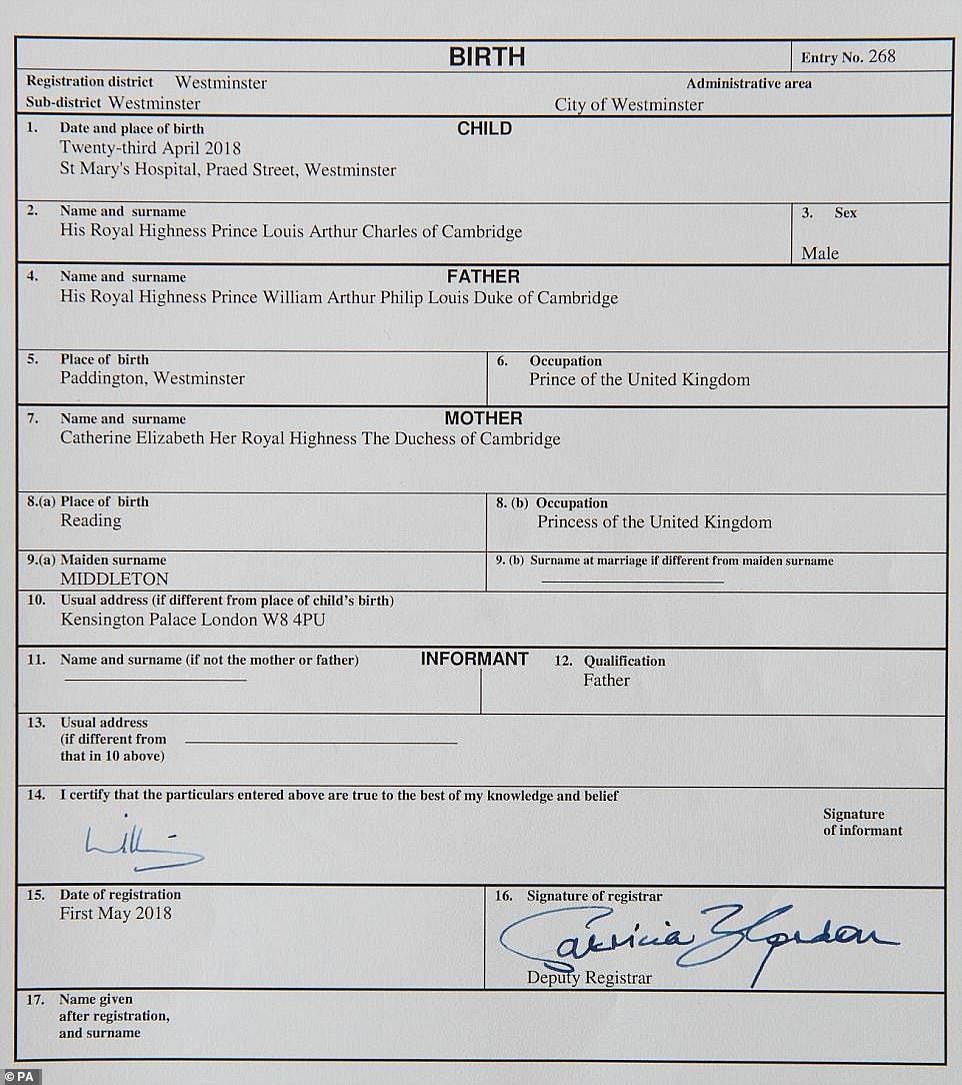 Yet when Princess Charlotte was born two years later, she did not let the experience put her off and wrote the certificate once again by hand. She has since described both moments as a career ‘highlight’.

For Louis’ birth however, things were done slightly differently. The form was typed and signed off by proud father the Duke of Cambridge. William signed the document by hand, as he did with all of his children’s certificates.

The Grade-II listed property is on the Windsor estate, and has been a royal residence since 1792. The couple had previously been living at Nottingham Cottage at Kensington Palace since getting engaged.

All four certificates list the mother and father as a ‘Prince and Princess of the United Kingdom’, and all include their places of birth. Harry however, has not signed Archie’s birth certificate as William did with his children’s.

Prince Andrew, born on March 19, 1960, became the first boy to be named Andrew in the British Royal Family for more than 500 years 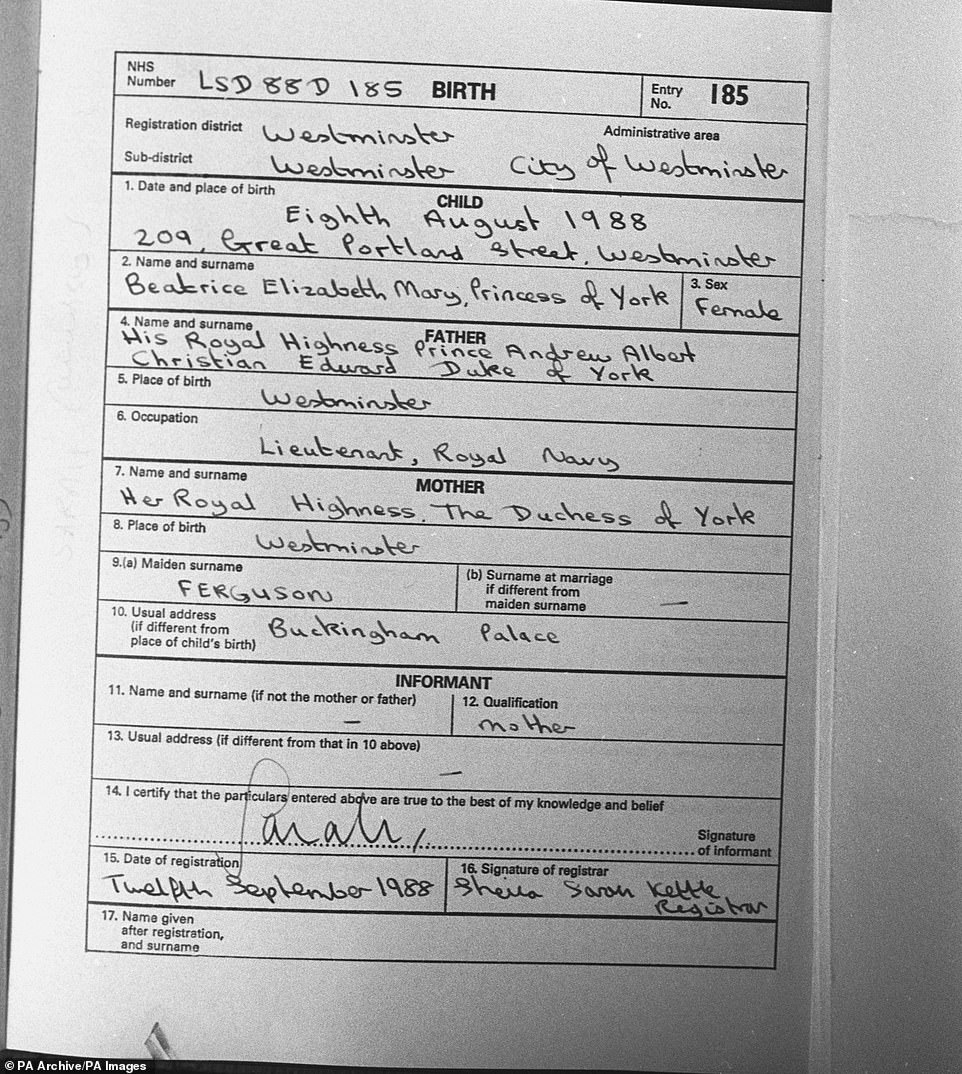 Princess Beatrice, born August 8, 1988, was registered by her mother Sarah Fergurson in Westminster