She’s steadily working her way towards being a full-fledged member of the royal fold ahead of her wedding to Prince Harry in May, ticking off another box today by attending the Queen’s annual Christmas lunch for the first time.

So it’s no wonder Meghan Markle has been making some tweaks to her casual California girl look to show that she’s left her Hollywood actress life behind for the royal of sophisticated royal wife.

Her look was very polished and glamorous, compared with her engagement portraits taken just over three weeks ago in which she looked much more bared back and natural.

Wearing a guipure lace and crepe dress by Self Portrait, Meghan looked as if she’d been taking style and grooming notes straight out of the Duchess of Cambridge’s handbook.

The Duchess herself wore Self Portrait to the London premiere of A Streetcat Named Bob in November last year and is famed for her bouncy brunette locks. 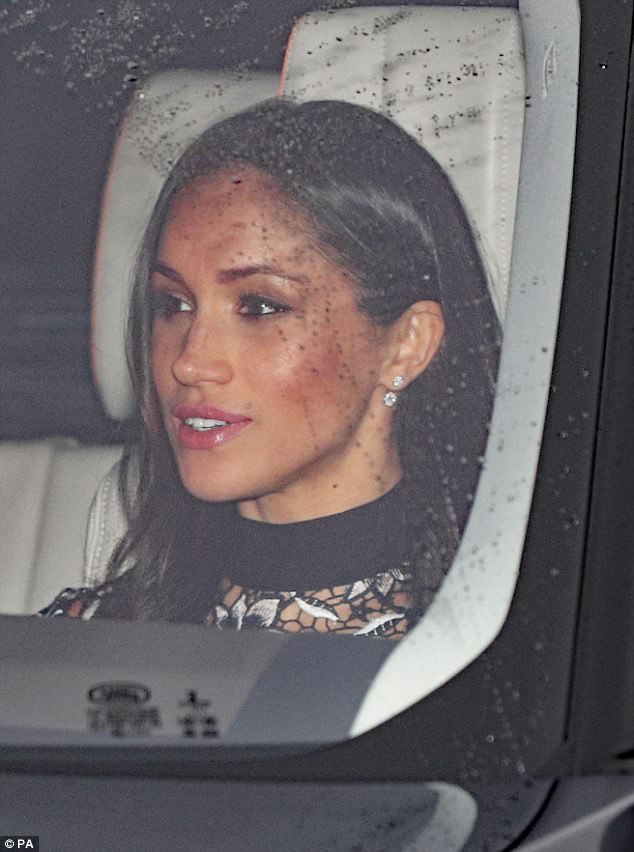 Meghan Markle, 36, opted for noticeably heavier make-up today as she joined Prince Harry for the first time at the Queen’s Christmas lunch 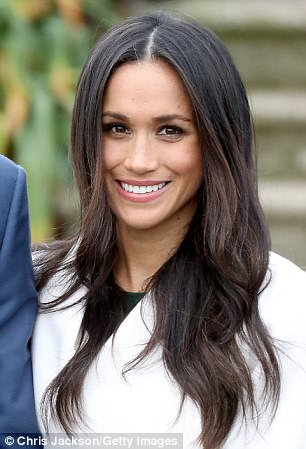 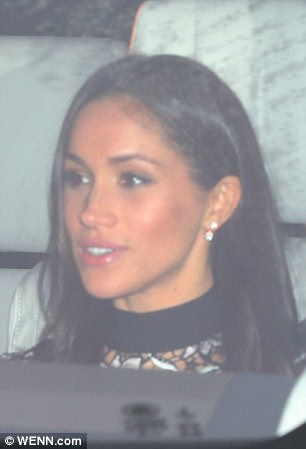 The bride-to-be was looking much more natural in her engagement portraits taken just over three weeks ago (left). Today, she ditched the natural look in favour of pink lipstick, bronzer and highlighter (right)

Meghan opted for Self Portrait’s Nightshade dress for her all-important debut at the Queen’s Christmas lunch (left). Kate chose a similar Self Portrait dress for the London premiere of A Street Cat Named Bob in November 2016.

Of course, nobody would expect Meghan to go for lunch with the Queen wearing the casual ripped jeans and untucked shirt she wore for her first official public appearance at the Invictus Games with Harry in Toronto.

However the guipure lace top and wide a-line skirt of the dress is a more fussy than the classic, pared back look Meghan normally goes for – signalling something of a style shift.

Niki McEwan, a make-up artist and TV beauty expert told Femail that Meghan has clearly had her eyebrows shaped since her engagement portraits three weeks ago.

‘They look to me as though she has had threading with a brow tint and they have been groomed and kept in place by a brow gel,’ she said.

Meghan ups the ante for lunch with the in-laws

Niki McEwan make-up artist and TV beauty expert told Femail that Meghan has clearly upped her beauty game for an important milestone in her life with Harry.

‘This is a more glamorous take on her usual style of makeup, perhaps due to the fact Meghan is meeting a lot of the Prince’s family for the first time,’ she explained.

She has chosen a smoky eye for optimal glamour, but maintained a more day time look by using a very natural false lash. My guess is she has used a wispie lash which gives a flutter to the lash whilst remaining natural.

‘The coverage of foundation is similar to what she always wears, however the contouring with use of bronzer is definitely more defined. Her cheekbones are sculpted with a warm bronze and the use of a rosy pink blush and matching rosy gloss lip adds to the impact that this is more of a party makeup style.

‘Her normal lip colour tends to be nude so by adding this colour she is immediately making a statement and alluding towards the fact that this is a special occasion. ‘ 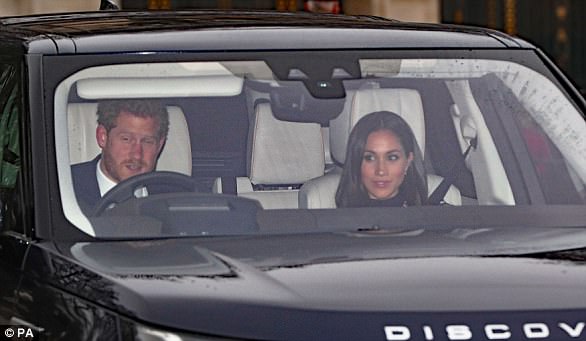 ‘I am sure she will be aware that any stray brow hairs detract from her eye makeup and she has definitely improved the look of her brow since the engagement.’

However, Stacey Whittaker, an award-winning make-up artist and owner of Pouts & Pin Ups Salon says the former Suits star has gone a little too far.

She explained: ‘The “pencilled in” eyebrow look does not suit everyone and I actually think looks too harsh on Meghan for a day time look and prefer her more natural brows.’

She added: ‘Her eyes are slightly darker too and look like they have a little more liner on them than usual.’

Independent hair and make-up artist Maddie Pearce, who is also a lecturer in Media Makeup and SFX has worked with clients such as Eva Mendez and The Pussycat Dolls and says that Meghan agrees that Meghan has upped her beauty game for the occasion.

How Meghan went from curly haired to glossy, straight locks

Teenage pictures of Meghan show a young girl with tight natural curls, which have since been relaxed.

However, today were locks were looking even more glossy and sleek than usual.

Afro Hair Stylist Randolph Grey at Neville Salon who has has styled Beyonce, Gabrielle and Naomi Campbell told Femail: ‘The look is highly polished and can only be have done in a professional salon not at home.

‘It is a Brazilian Blow Out otherwise more commonly known as Keratin Treatment. Hair is far easier to maintain after one of these treatments.

‘Keratin treatment takes about two or three hours depending on hair length and thickness.

‘When you have this level of high gloss shine and super sleek hair that behaves, it can only be a Keratin Treatment.

‘Relaxer followed up with treatment and Olaplaex would be the only other option.

‘To soften her tight curls she has had a Relaxer Process. This can be done in an hour-and-a-half to two hours.

‘The Relax Process reduces her natural curl and is then backed up with moisture and protein lotion and finishing products like flat ironing.’

According to Maddie, Meghan has kept her trademark natural shape for her brows.

‘However, she has applied a highlighter under the brow on the brow bone itself which really defines the shape,’ she said.

The royal bride-to-be has previously said she prefers a natural look and doesn’t wear foundation outside of work, but that certainly wasn’t the case today.

‘Meghan looks like she has used creamy product to create a dewy glow over the skin, opting for a slightly heavier make up that usual carefully bronzing and sculpting the face,’ she said.

‘No doubt she’s stuck to her tried and perfected Bobby Brown foundation as a base. 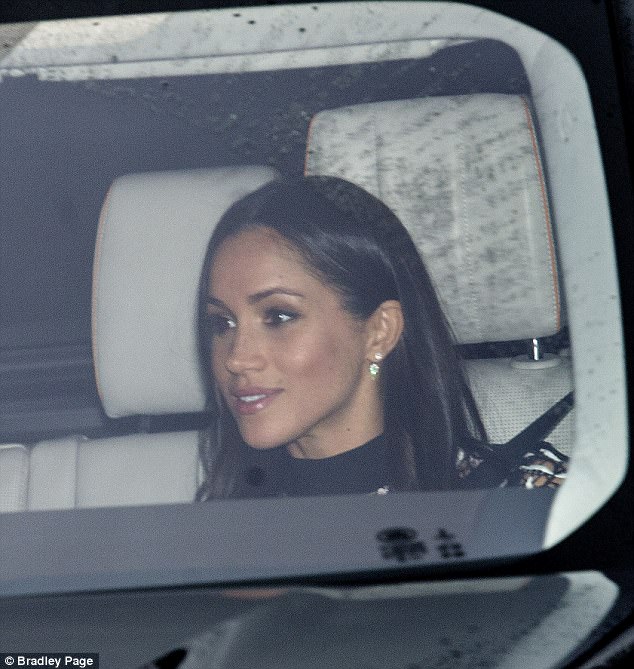 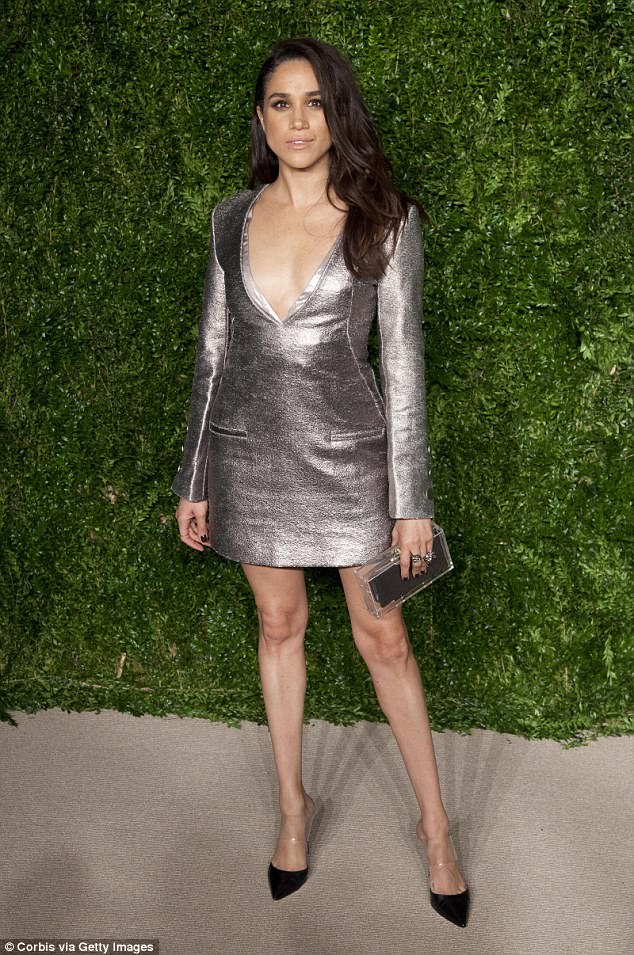 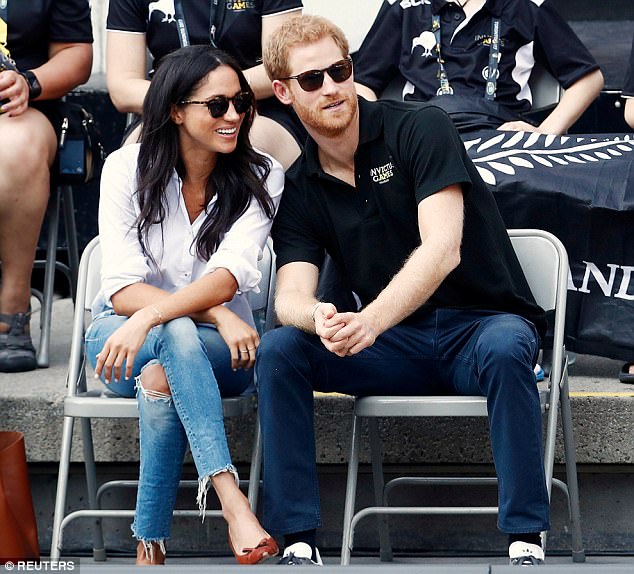 A California girl a t heart, Meghan chose to wear ripped jeans and a relaxed shirt for her first official public appearance with Prince Harry