Meghan Markle has made her official debut alongside fiance Prince Harry and future in-laws the Duke and Duchess of Cambridge today in their first public engagement as a foursome.

The former actress, 36, appeared at the inaugural Royal Foundation Forum, an event highlighting the progress of the young royals’ charitable projects.

Meghan will become a patron of the charity alongside Harry, William and Kate following the wedding in May but is already involved and is expected to answer questions on various projects at the London forum.

It is the first time the foursome have been pictured together since they attended a Christmas Day church service in Norfolk with the majority of the Royal Family.

Speaking at the event, William officially welcomed Meghan to the family, adding how ‘delighted’ he was for her to join them at the event, which was greeted with a warm round of applause from Kate.

Prince William, Prince Harry, the Duchess of Cambridge and Meghan Markle made their official debut as a foursome today at the Royal Foundation Forum in London 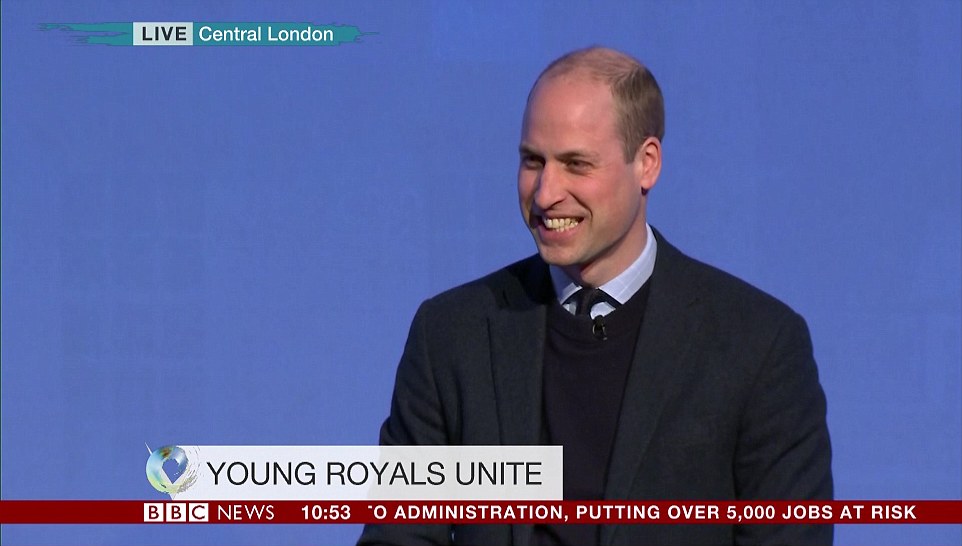 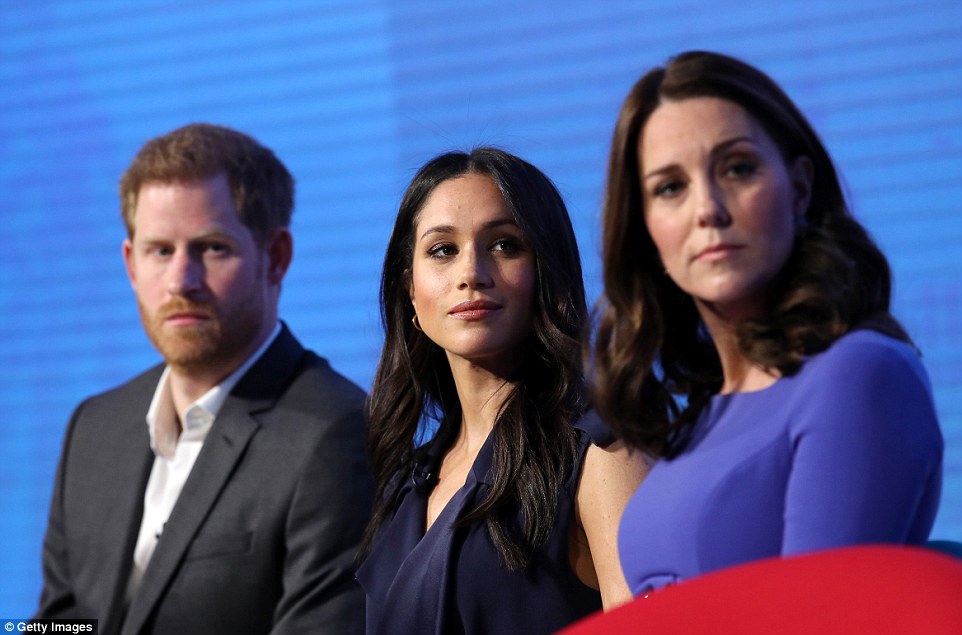 Meghan, centre, will join Harry, left, Kate, right and William as patrons when after the Royal Wedding in May 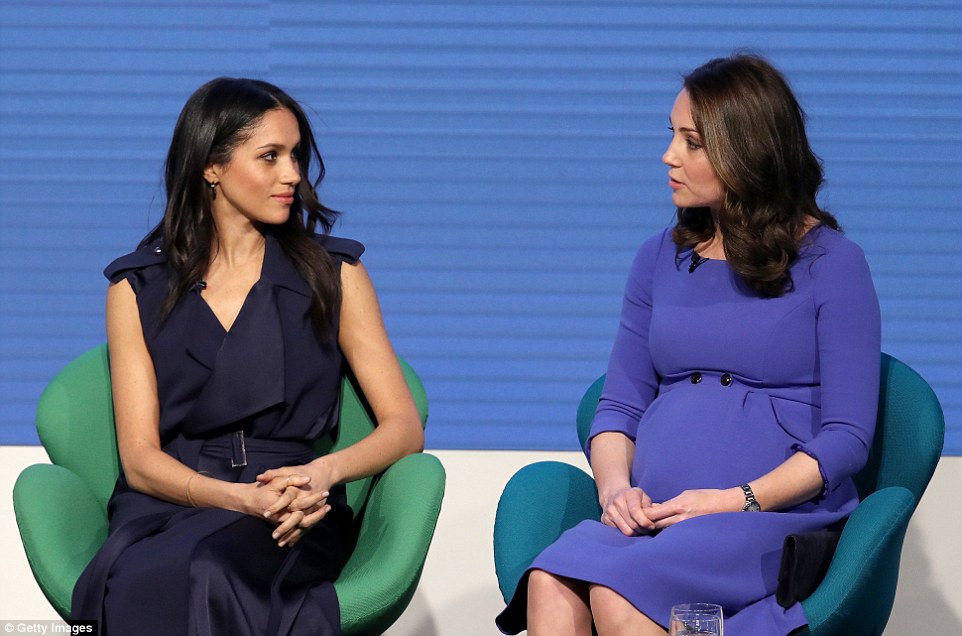 Kate, right, who is expecting her third child in April, gave a round of applause when William welcomed Meghan, left, to the family 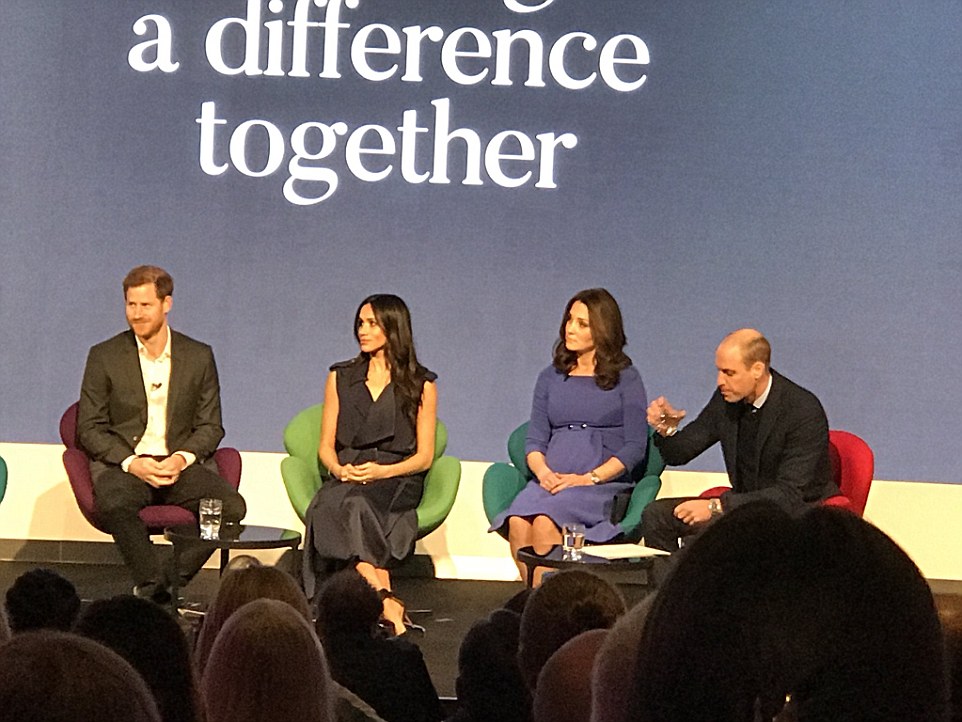 The Making a Difference Together forum allowed the Royals, pictured, to give insight into their charitable projects

The two couples arrived together for their first official event as a foursome and took their seats in front of a invited audience for the inaugural forum of their Royal Foundation.

Kate, who is expecting her third child in April, wore a Seraphine dress while Ms Markle was dressed in a Jason Wu outfit.

William opened the event by outlining the philosophy behind the Foundation, saying: ‘We would not seek quick wins, but would strive to make a real and lasting difference.’

The duke said they took inspiration from their parents the Prince and Princess of Wales who were ‘an example of diligence, compassion and duty’, and their grandparents the Queen and Duke of Edinburgh, who ‘had made support for charity central to their decades of service to the nation and the Commonwealth’.

William told the invited guests, who included foundation supporters, programme partners and beneficiaries: ‘The task for us would not be to reinvent the wheel.

‘Instead, our job was to follow the example of those who had come before us, hold on to the values that have always guided our family, but seek to engage in public life in a way that was updated and rent for our generation.

‘We were aware that the modern charity sector was very different to the one that previous generations had worked alongside.

‘The generosity of the British people, and the entrepreneurial and creative passion that is at the heart of our communities had seen the number of charities grow from a few thousand in the 1950s to around 180,000 today.’

Under the theme ‘Making A Difference Together’, the event at the Aviva offices in central London will showcase programmes run or initiated by the Royal Foundation such as mental health campaign Heads Together, the Invictus Games for injured servicemen and women, and conservation scheme United For Wildlife. 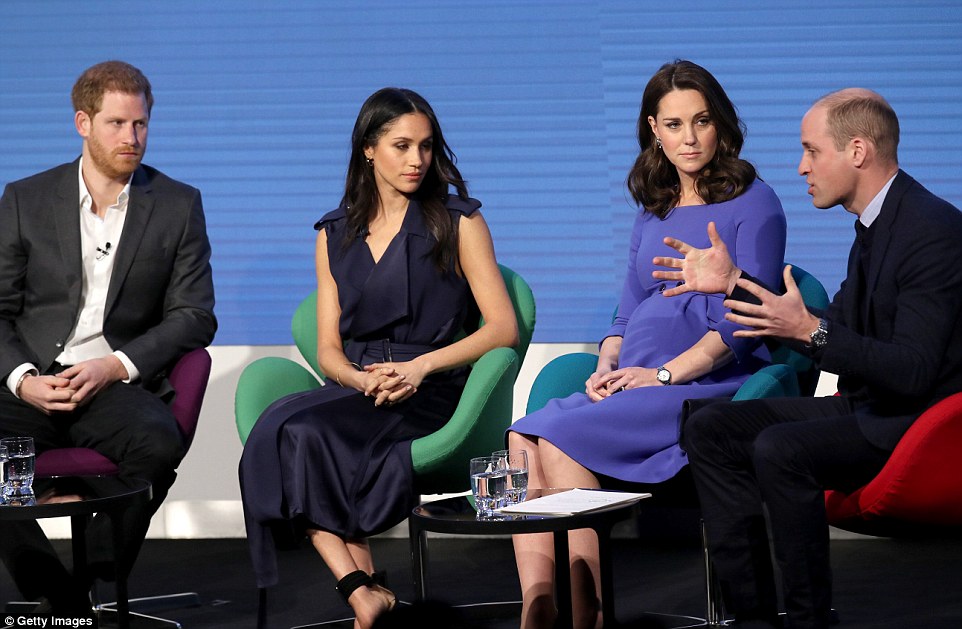 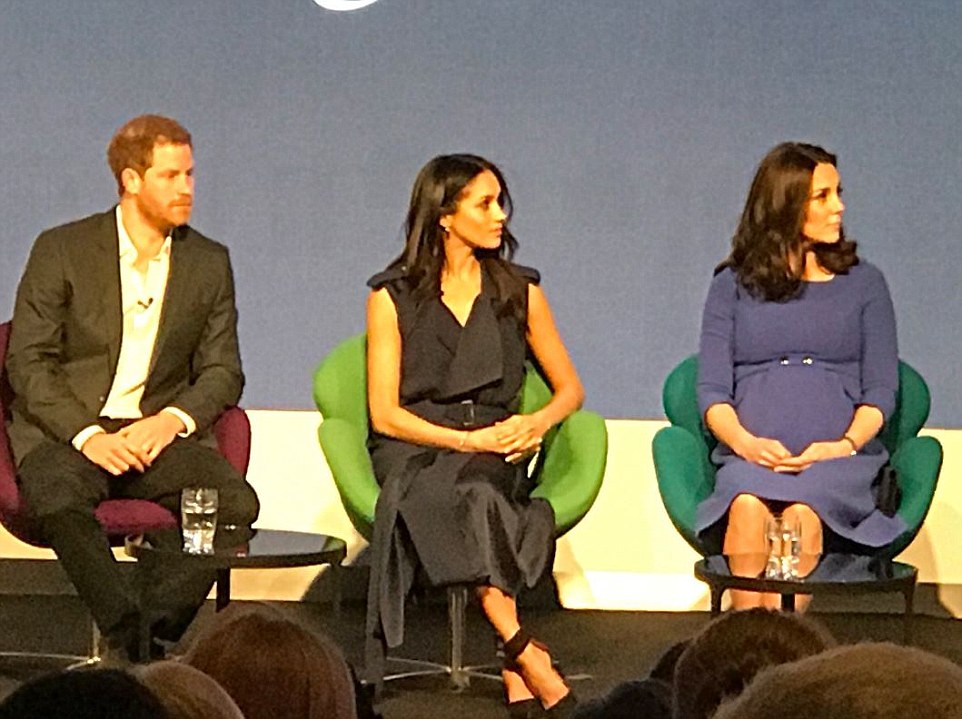 Kate, right, said mental health was a huge focus for her while Meghan, centre, said she was excited to be joining Harry and his family in the foundation after previously campaigning for women’s rights 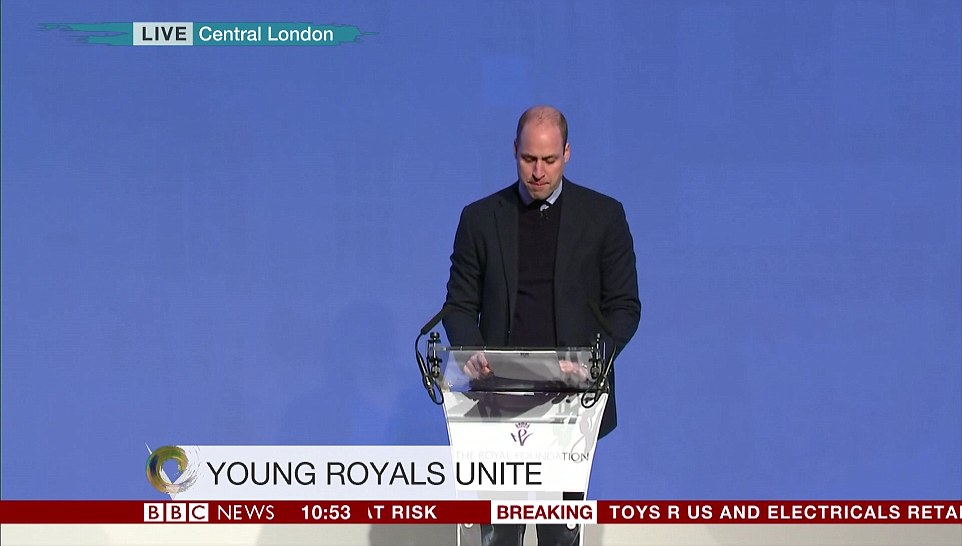 Launched in 2011, the foundation was set up by William and Harry as the main vehicle to pursue their charitable and philanthropic interests.

It is understood Harry and Meghan are keen to focus on issues around youth violence in the UK following a visit to Brixton radio station Reprezent, set up in 2008 following a spike in knife crime.

They have also met mentors from the Full Effect project in Nottingham who work with young people to prevent them joining gangs.

Royal Foundation chief executive Lorraine Heggessey told Sky News the presence of all four at the event was ‘significant’.

She said: ‘What’s important to all three of their royal highnesses at the moment and Ms Meghan Markle is that this generation of the royal family is seen to work together collectively to make a difference and make a significant impact on the issues that matter both to them as individuals and matter to them collectively and to society.

‘I think for Ms Markle she just naturally had synergy and you know understood that idea, it resonated with her and we’re now researching, very early stages areas of interest and themes that might develop for her in the future’.

The Forum will be hosted by BBC presenter and Radio 1 newsreader Tina Daheley and the audience made up of invited guests, supporters of The Royal Foundation, programme partners and beneficiaries.

Meghan is not expected to have any trouble answering questions given her experience making media appearances as an actress for several years, including panels for her US television show Suits.

Unlike many older members of the Royal Family, who lend their name to good causes by agreeing to become a patron of a specific organisation or charity, William and Harry have decided to largely focus their efforts on causes they have a direct involvement with through their own charitable foundation.

After she and Harry, 33, marry, Miss Markle will become the fourth patron of the Foundation – which will then be known and the Royal Foundation of the Duke and Duchess of Cambridge, and whatever Dukedom the Queen bestows on Harry and his bride. 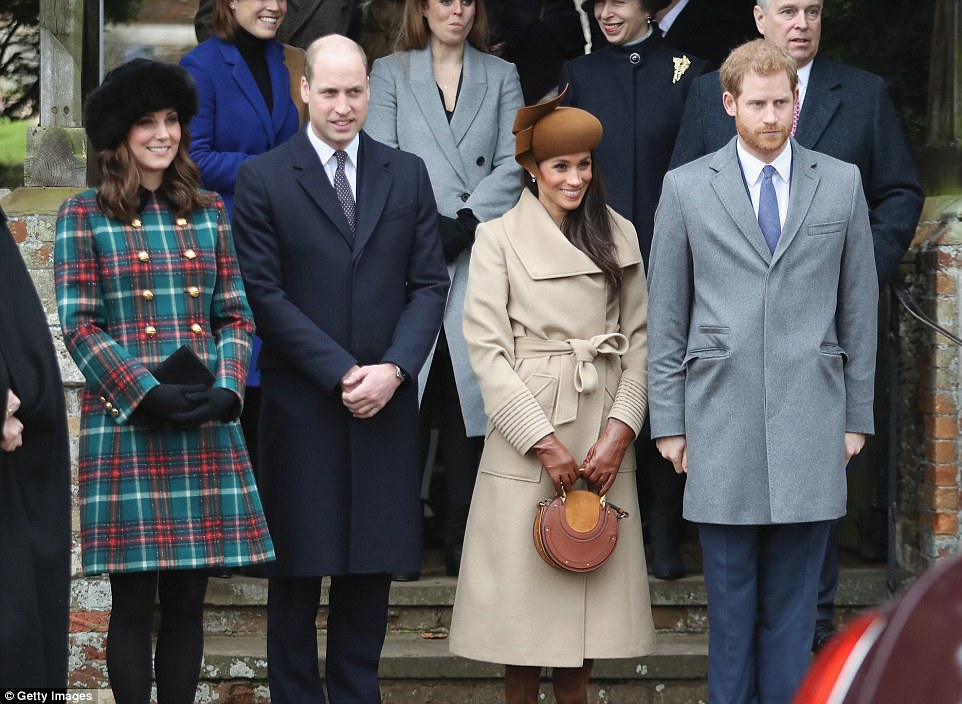 Meghan Markle is set to make her ‘working’ debut alongside fiancé Prince Harry and the Duke and Duchess of Cambridge today. Pictured: The Fab Four on Christmas Day in King’s Lynn 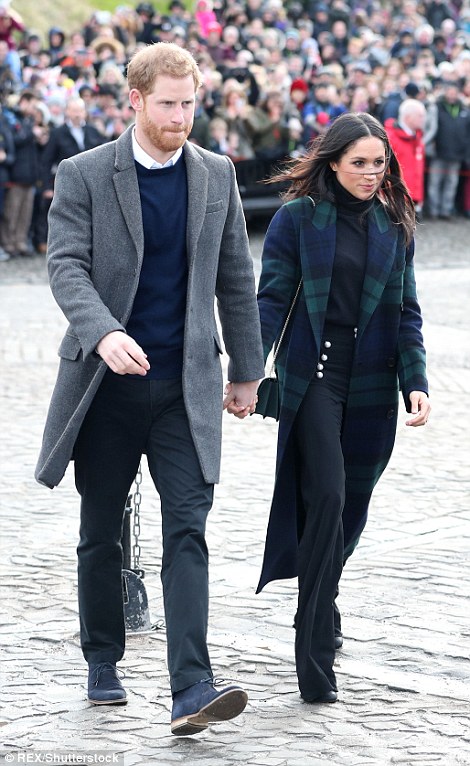 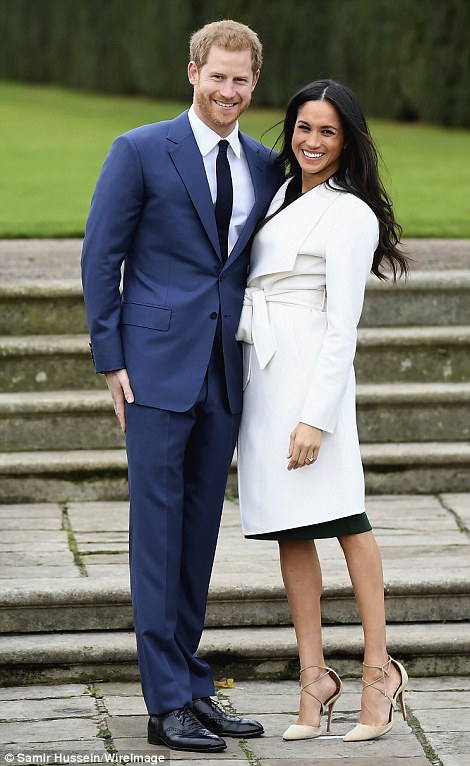 Miss Markle, 36, is even expected to answer questions about projects currently supported by the foundation and of its ambitions for the future, a test for which she will no doubt draw on her experience as a working actress 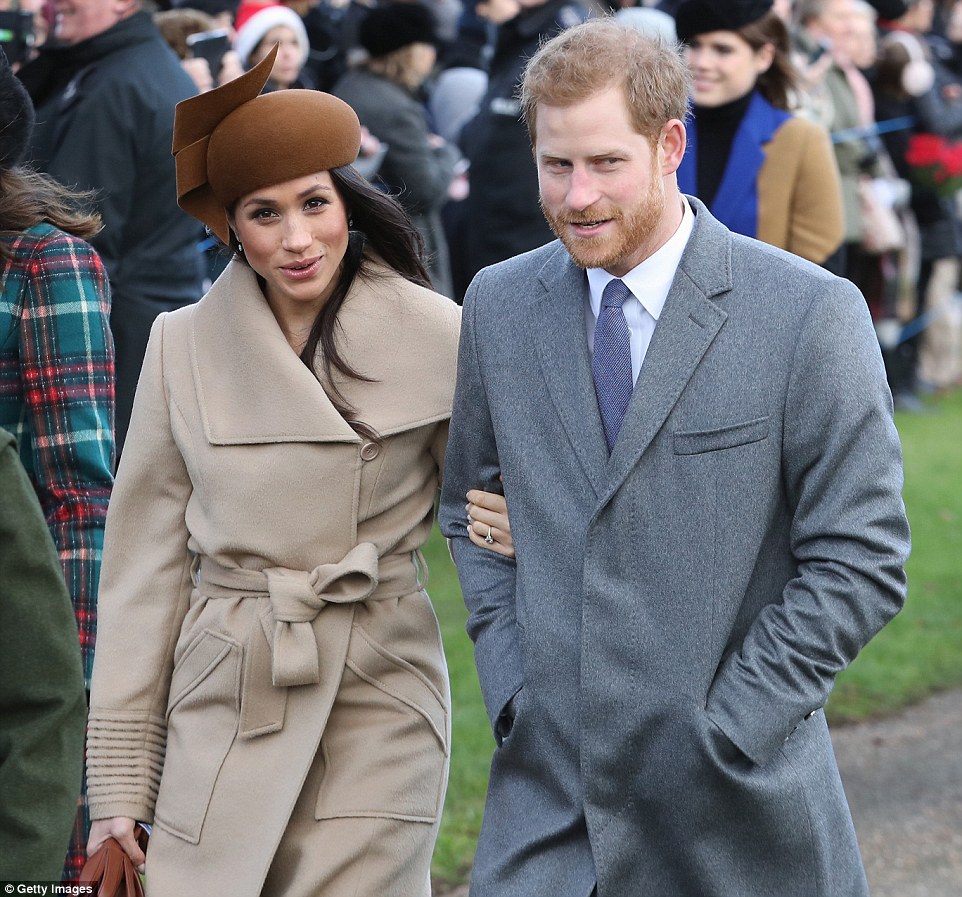 Today’s audience will be made up of invited guests, supporters of The Royal Foundation, organisations it is partnered with, beneficiaries – and, of course, the worldwide media. Pictured: Harry and Meghan on Christmas Day 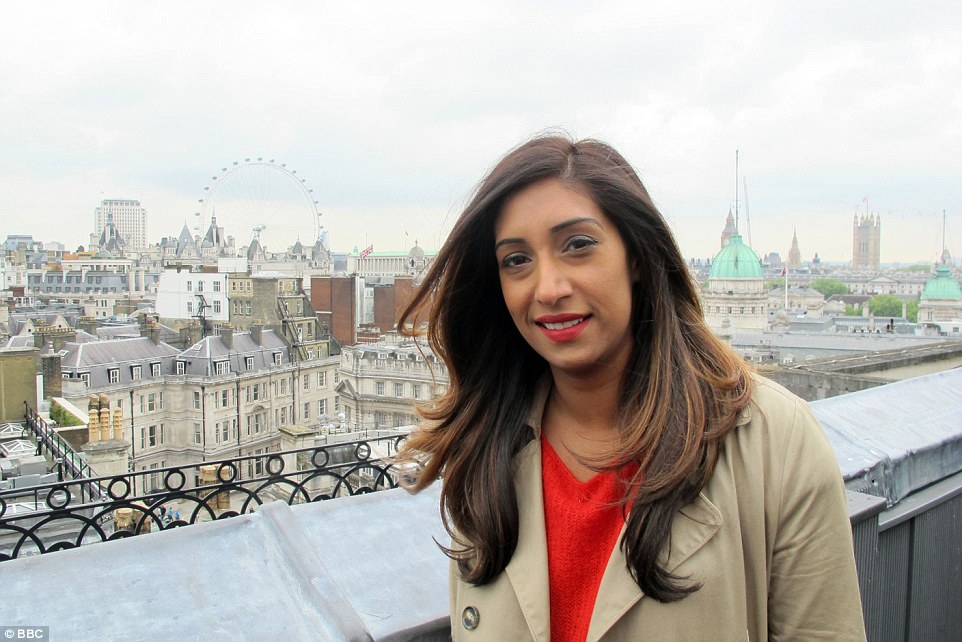 Today’s audience will be made up of invited guests, supporters of The Royal Foundation, organisations it is partnered with, beneficiaries – and, of course, the worldwide media.

Miss Daheley, 36, who found fame presenting the news and sport for Nick Grimshaw’s Radio 1 Breakfast Show, is seen as one of the up and coming stars of BBC journalism (having recently branched out into prime time television such as Panorama and Crimewatch) – although, fortunately for Meghan, she has said that: ‘I’m never going to be a Paxman and nor do I want to be.’

The ferociously hard-working daughter of first generation Asian parents, she has worked her way up the ranks of the BBC but is also friendly with celebrities such as Kate Moss. 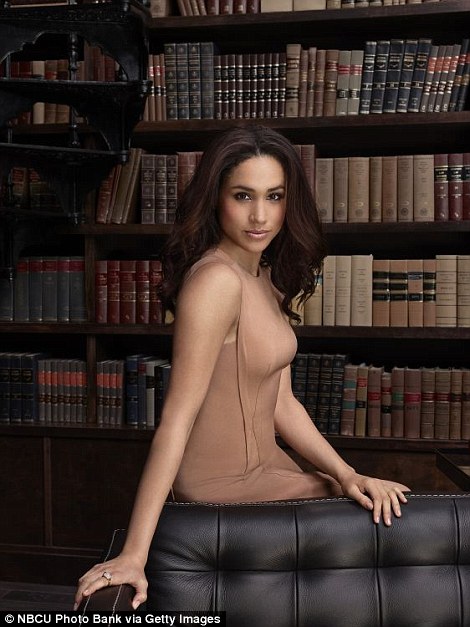 As the star of US legal drama Suits, she frequently took part in televised script readings followed by question and answer sessions with journalists and members of the public

Indeed, she is seen as having the ear of young people and knows how to talk to them – something that will have appealed greatly to William, Kate and Harry.

Feisty and opinionated, she has frequently spoken out of how young people don’t feel that current politicians are representing their views.

Other programmes represented at today’s event are the nationwide sporting apprenticeship scheme Coach Core, the veteran support organisation The Endeavour Fund, and the new Heads Together mentally healthy schools initiative.

Harry and his fiancée are due to walk down the aisle together at Windsor Castle on May 19, after which they will enjoy an open-topped carriage ride through the streets of the town to allow as many members of the public as possible to see them.

Invitations for the wedding are due to go out next week.

William is expected to be Harry’s best man at his Windsor wedding and royal watchers will be keen to see the interaction between Kate and Meghan at their first appearance on official duties together.

The duke and prince’s mother Diana, Princess of Wales forged a strong bond with her sister-in-law Sarah, Duchess of York in the early years.

But the pair fell out later on.

William and Kate expressed their delight at the news of Harry’s engagement last year.

‘We are very excited for Harry and Meghan. It has been wonderful getting to know Meghan and to see how happy she and Harry are together,’ they said.

WHAT IS THE ROYAL FOUNDATION? HOW WILLIAM, HARRY AND KATE HAVE SPEARHEADED CHARITY EFFORTS INCLUDING MENTAL HEALTH, CONSERVATION AND THE INVICTUS GAMES

The Royal Foundation was established by Prince William and Prince Harry in September 2009 as a vehicle for their charity work.

They were joined as patrons by the Duchess of Cambridge following her wedding to William in 2011, the same year the foundation became fully operational.

Meghan Markle will become the fourth patron after marrying Prince Harry in May. She has already been involved in the Foundation’s Endeavour Fund to support the recovery of wounded troops by engaging them in sport. 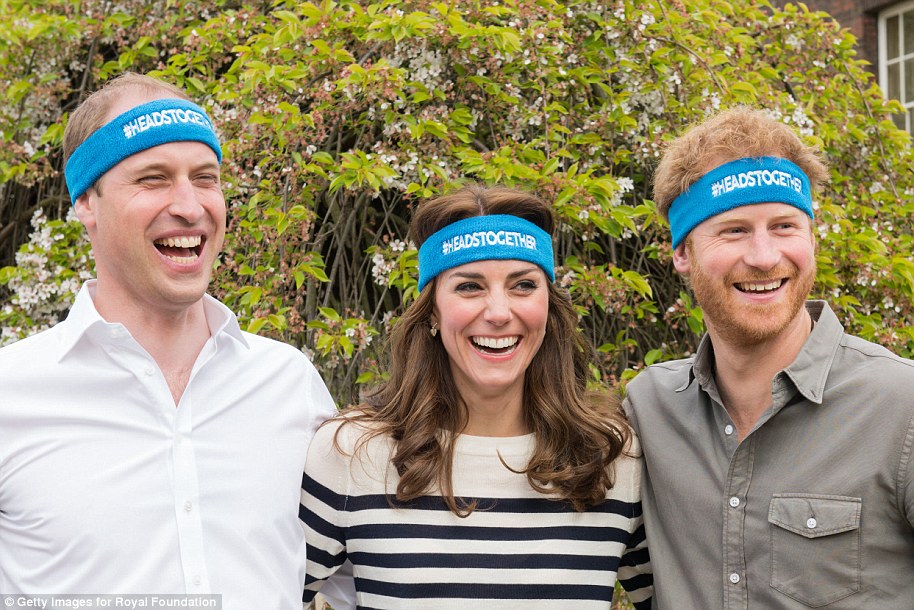 (From left) Prince William, the Duchess of Cambridge and Prince Harry set up the Royal Foundation to focus on charity projects close to their interests. They are pictured at an event supporting their Heads Together mental health campaign 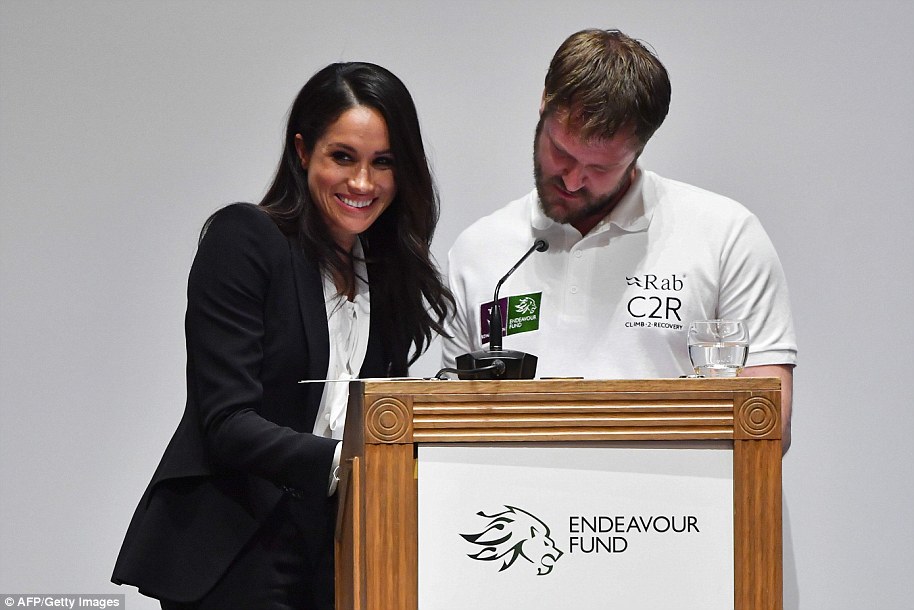 Meghan Markle will become an official patron after the royal wedding but has already been involved in the Endeavour Fund supporting wounded soldiers, pictured

It was set up for philanthropic projects based around four initial areas that were close to the royals – mental health, the armed forces, conservation and helping young people.

One of the most high profile projects it is involved in is the Invictus Games, the bi-annual sporting event created by Prince Harry for injured military personnel, with a separate foundation created to organise it.

Other work includes improving secondary education in poor areas of Uganda, where only around 25 per cent of children have access to schools.

International conservation organisation United for Wildlife is another of the foundation’s projects, set up to engage 15-30-year-olds in protecting the environment while raising awareness of the impact of poaching and illegal trading in parts of Africa and Asia.

Both princes and Kate have also been very involved in the Heads Together programme to tackle stigma around mental health, and the charity was even partnered with the 2017 London Marathon.

The foundation has also been used to react to major events, such as the Grenfell Fire tragedy last year where a community hub was established to help victims and families living in the area in the aftermath of the disaster. 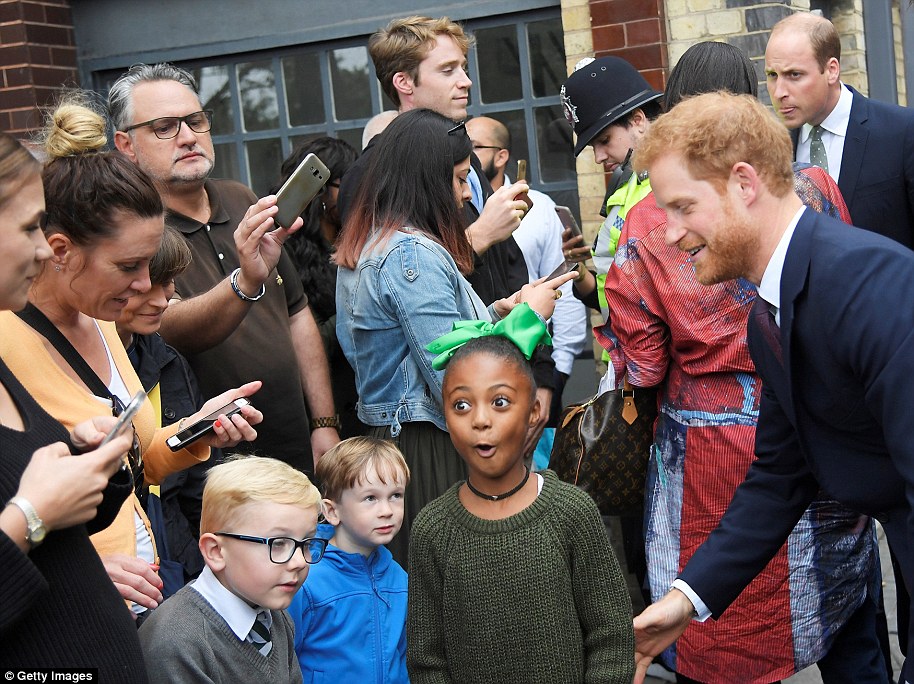 The Foundation has also been a reactive organisation, setting up a community hub for the victims of the Grenfell Fire tragedy, pictured, and the residents in the nearby area