The Royal Wedding was nothing short of spectacular especially because of Meghan Markle’s gorgeous gown but the internet thinks it looks exactly like the one Jennifer Lopez wore in The Wedding Planner.

Meghan opted to wear a stunning Givenchy gown which many people immediately recognized as being oddly similar to the dress worn by J.Lo in the 2001 film and people were quick to call out the comparison on Twitter.

Both dresses were similar in the fact that they had bateau necklines, a simple A-line silhouette and three quarter sleeves. 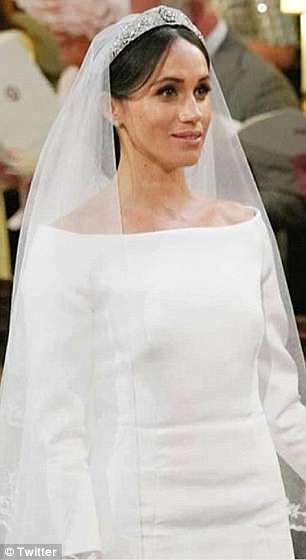 Twins: The internet is comparing Meghan Markle’s gorgeous Royal Wedding gown (right) to the one Jennifer Lopez wore in The Wedding Planner (left)

Comparison: Many people immediately recognized Meghan’s dress as being oddly similar to the dress worn by J.Lo in the 2001 film 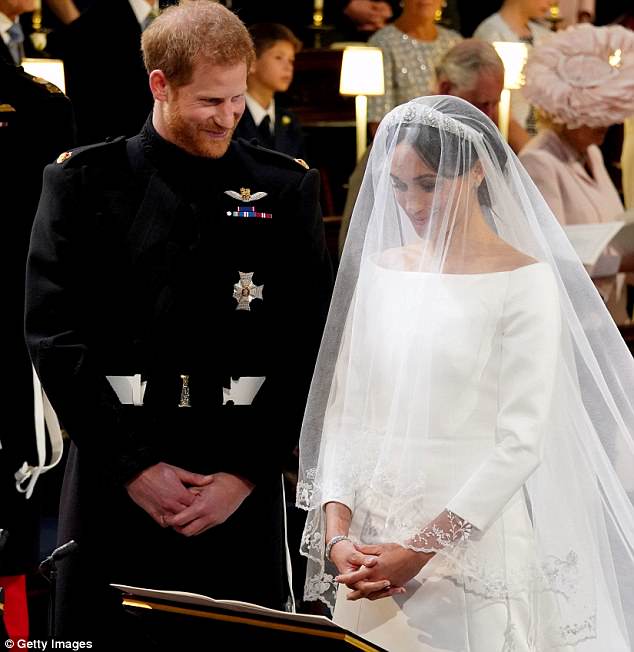 Movie: The comparisons to the film are seriously similar which people couldn’t help but point out, especially this photo of Meghan, 36, and Prince Harry, 33 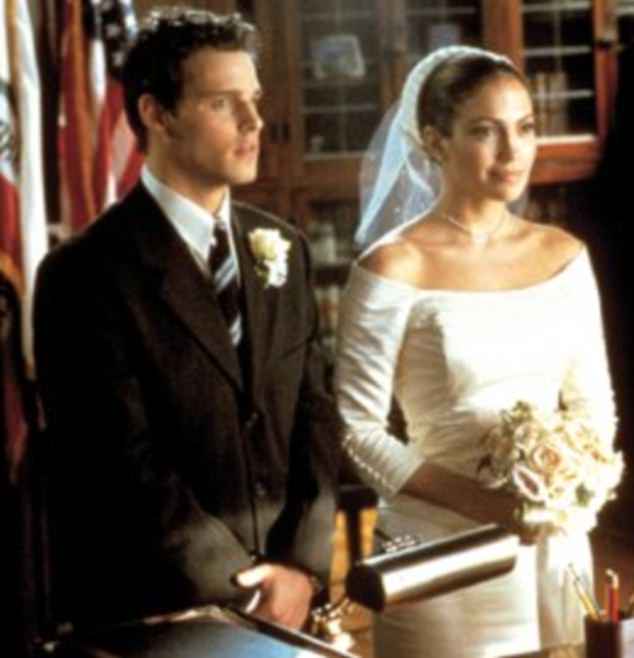 Similar: The photos of Harry and Meghan together look a lot like this photo of J.Lo marrying Justin Chambers at a courthouse in the 2001 film

Same dress: This user pointed out that Meghan copied J.Lo’s dress from the movie 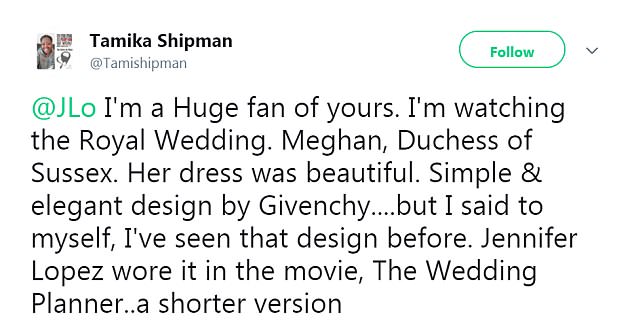 Familiar: One woman pointed out that she recognized Meghan’s dress when she was watching the Royal Wedding because it was exactly like J.Lo’s 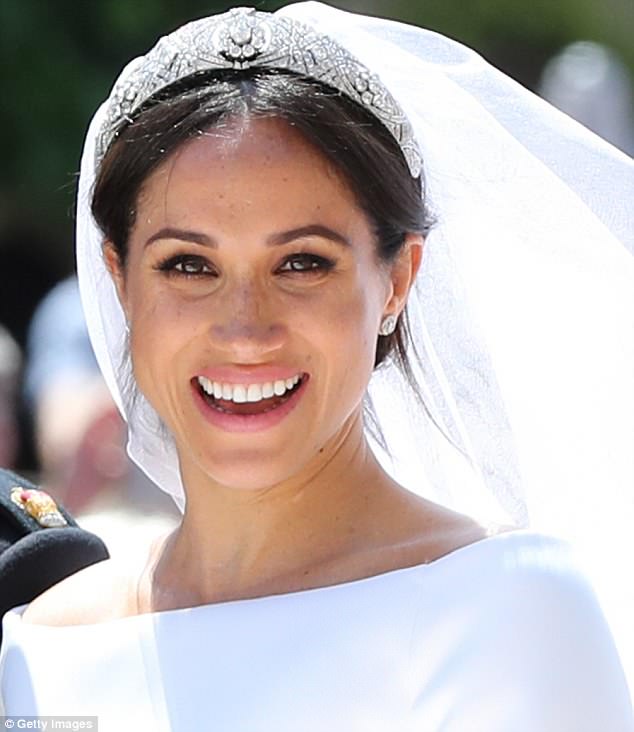 Gorgeous: Meghan opted to wear a stunning Givenchy gown made by British designer, Clare Waight Keller which cost a whopping $270,000 compared to J.Lo’s beat up old dress in the film

The boat necklines of both dresses were extremely similar which caused a stir on social media as one user tweeted, ‘Anyone else get J.Lo in the Wedding Planner vibes from Meghan Markle’s dress?’

While there were a lot of similarities between the two frocks, one thing is for sure is that Meghan’s dress doesn’t even compare to the one worn by J.Lo as Meghan’s Givenchy gown cost a whopping $270,000.

Meanwhile, Jennifer’s dress in the film was created by costume designer Pamela Withers where J.Lo’s character Mary Fiore wears a beat-up old dress to her courthouse wedding to Justin Chambers who she doesn’t even end up with in the end.

‘Anone else getting a very J.Lo Wedding Planner vibe from the new Duchess of Sussex’s wedding dress?’ someone else tweeted while another user commented, ‘Uh we saw J.Lo wear this dress in The Wedding Planner…’

While other similar tweets read: ‘Meghan Markle’s Royal Wedding dress looked like the one Jennifer Lopez wore in the movie The Wedding Planner,’ and ‘Anyone else think Meghan looks just like J.Lo in the Wedding Planner?’ 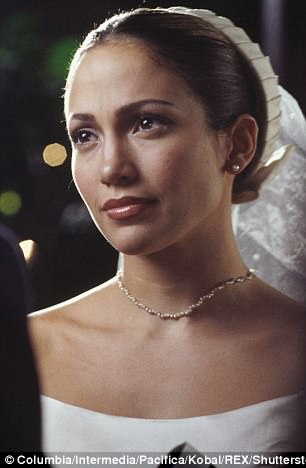 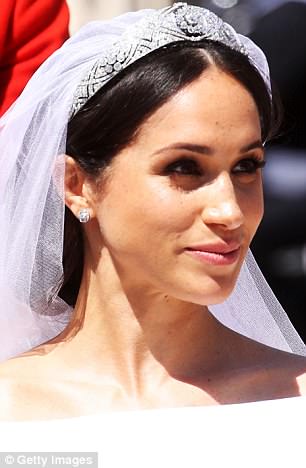 Similar: The boat necklines of both dresses were extremely similar which caused a stir on social media

Vibes: This woman admitted she was getting ‘J.Lo in the Wedding Planner vibes’ from Meghan Markle’s dress

Copy: Another user quickly pointed out that we’ve seen Meghan’s dress before because J.Lo wore it first

One woman even wrote: ‘J.Lo I’m a Huge fan of yours. I’m watching the Royal Wedding. Meghan, Duchess of Sussex. Her dress was beautiful.

‘Simple and elegant design by Givenchy….but I said to myself, I’ve seen that design before. Jennifer Lopez wore it in the movie, The Wedding Planner…a shorter version,’ she continued.

Meanwhile, one woman agreed with the similarities but also compared Meghan’s dress to someone else writing, ‘A mixture between Julie Andrew’s in Sound of Music and Jennifer Lopez’s The Wedding Planner.’

Vibes: Another woman tweeted out that she was getting ‘Wedding Planner vibes’

Mixture: This user said she felt like Meghan’s dress looked like J.Lo’s and Julie Andrews’ dress from Sound of Music

Opposite: Meanwhile, this woman though Meghan looked much better than J.Lo did

Despite all of the comments from people saying how similar the dresses wore, other people were quick to shut down the similarities as one person confessed, ‘I think J.Lo looked better. Who did Meghan’s hair, looks messy.’

Aside from the J.Lo comparisons, Meghan’s dress also sparked a slew of online comparisons to Disney princess, Cinderella.

‘Is anyone going to address the fact the Meghan Markle’s wedding dress is giving off some serious Cinderella wedding dress vibes?’ declared one user, sharing photos of Meghan and the Disney princess taking identical strolls out of the chapel. 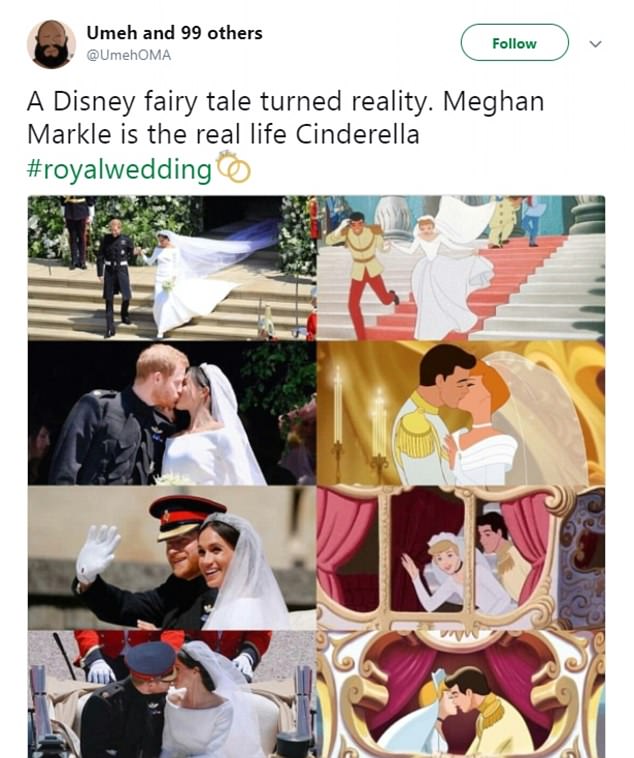 The real Disney wedding: Social media users have taken to comparing the royal wedding to the happy ending of the movie Cinderella 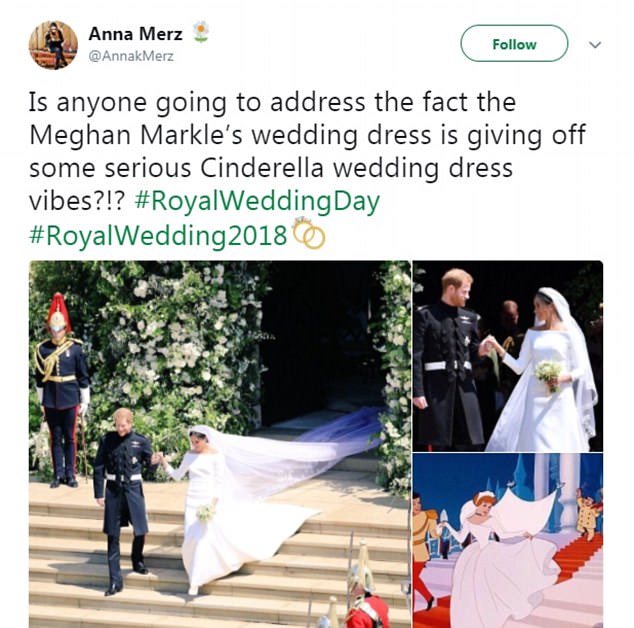 Social media users pointed out the similarities between the dresses, which were both simple with wide necklines, and accompanied by long trains and veils attached to tiaras.

‘Whether or not you like the design, can we talk about how @givenchy hired the mice from Cinderella to do the fittings for #MeghanMarkle ‘s dress? Patternmaking 101,’ joked one user. 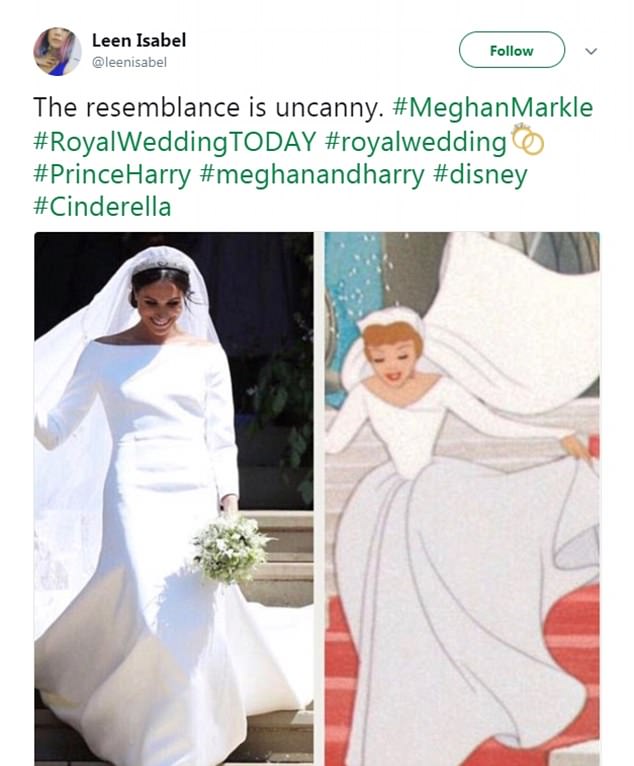 Spot on: Both dresses are simple with wide necklines and long sleeves, as well as a long train attached to a glittering tiara 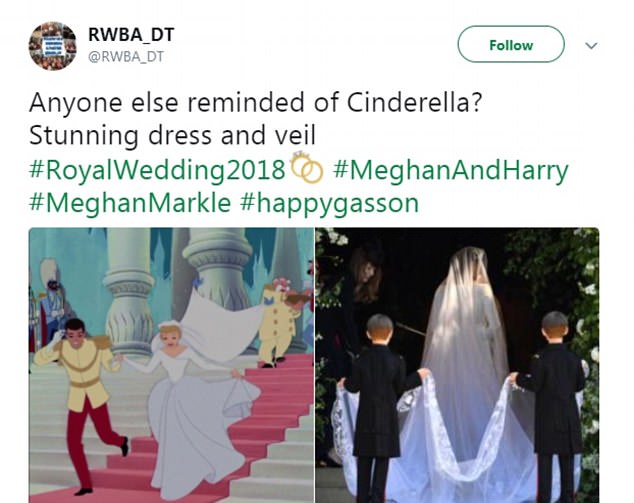 Happy days: The boys carrying the train stood in for the blue birds from the movie 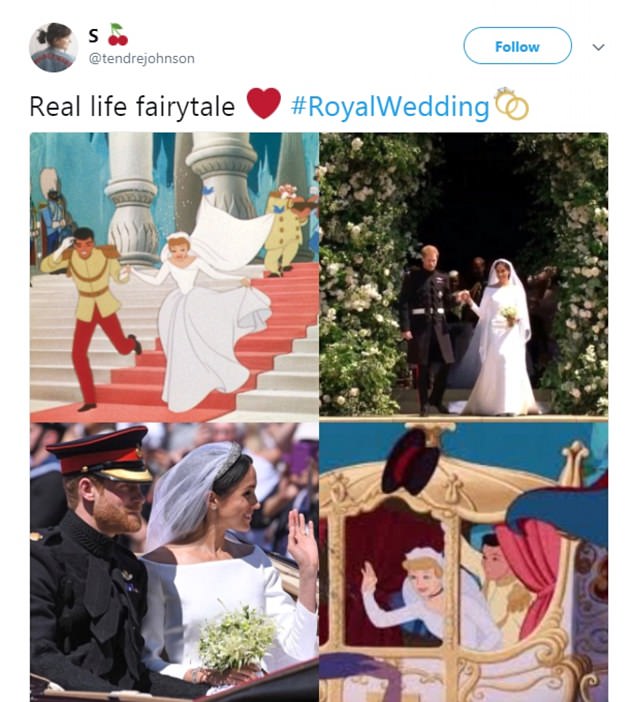 Others pointed to the moment that Harry lifted Meghan’s veil, exposing her face looking up at him with ‘pure love’, adding that she was showing off a ‘Disney smile.’

Then as couple left the church and were photographed coming down the stairs and climbing into their horse-drawn carriage, users found even more identical scene comparisons to the 1950 Disney film.

Outside St George’s Chapel, more than 100,000 fevered well-wishers gathered in glorious British sunshine and cheered the couple as they started their new married life in the grand Ascot Landau carriage.

As the newlyweds were swept through Windsor greeting huge crowds waving Union Flags the VIP guests were taken up to the castle for a lavish lunch and drinks hosted by the Queen.