Meghan travelling to Uvalde and not to her sick father’s side is unimaginable, writes DAN WOOTTON

Family comes before anything else for me.

So, like many others, I find it unimaginable that Meghan Markle the length of the country for a tacky photo opportunity at the site of the Uvalde school shooting, possibly with Netflix reality show cameras in tow, but not drive three-and-a-half hours down the road to see her stricken dad in hospital, who is recovering from a life-threatening stroke that has cruelly stolen his speech.

The briefing and counter briefing that has emerged in the last 24 hours about the Duchess of Sussex trying to reconcile with her dad on the condition her brother and sister are left out of any reunion is as disingenuous as it is nonsensical.

Right now, Thomas is being cared for 24 hours a day by Thomas Markle Junior, Meghan’s half-brother.

Thomas can’t speak – for now his son is responsible for full time rehabilitation as the family try and work out a funding plan for the long months of treatment that remain ahead.

More so, Thomas, who is 77-years-old and has a history of serious heart problems, is most likely only alive today because he was on the phone to his wheelchair-bound daughter Samantha when the stroke began and she hastily called for an ambulance to rush him to the hospital.

That quick thinking probably saved his life, according to the medics.

Meghan Markle, the wife of Britain’s Prince Harry, places flowers as she mourns at a makeshift memorial outside Uvalde County Courthouse in Uvalde, Texas, on May 26, 2022 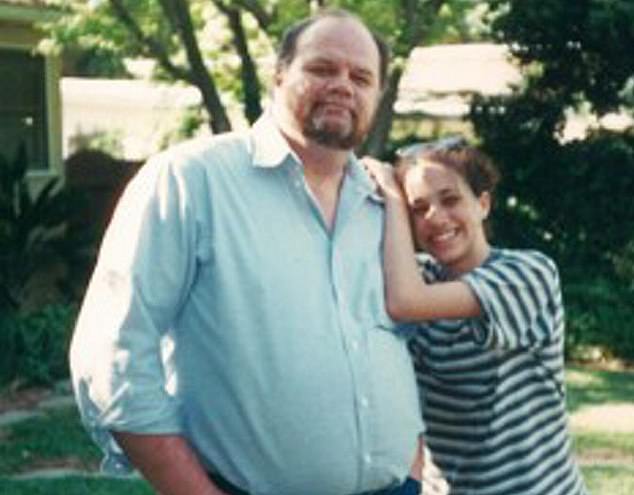 So rather than slagging off her siblings, Meghan should be showering them with love for offering the practical and emotional support to their father.

The story splashed all over the front page of the Sunday Mirror newspaper yesterday has caused much consternation for the Markles, who are convinced it was a brazen PR attempt to make Harry and Meghan’s return to the UK this week for the Diamond Jubilee celebrations more palatable.

The newspaper reported: ‘The Duchess of Sussex is set to finally heal the bitter four-year rift with her ailing father Thomas. Meghan is understood to have reached out to her dad’s camp after it emerged he is out of hospital recovering from a stroke.’

Thomas’s phone number has never changed; he’s kept his original digits partly because he lives in hope that one day his daughter will end the estrangement before his death, which he openly predicts will come in the next three years.

So she could have texted her father direct, who is still able to write. She hasn’t.

She could have driven to the hospital or got a flight to Thomas’s home in Mexico, where he is now recuperating. She hasn’t.

The suspicion from the Markles is that the story was a pre-jubilee publicity stunt designed to stop the British public, many of whom have their own reasons to dislike Meghan after her criticism of the Royal Family, booing her at the Jubilee.

Thomas’s daughter Samantha told me earlier today she believes it is unconscionable for her half-sister to travel to the UK if she doesn’t see her dad first. 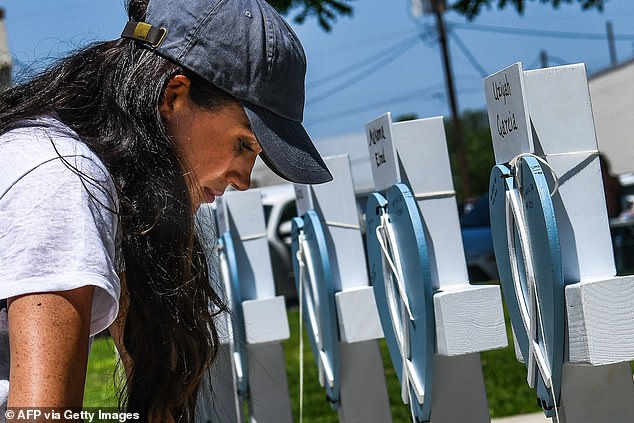 Meghan Markle is pictured outside Uvalde County Courthouse in Uvalde, Texas, on May 26, 2022. She was seen laying flowers at a memorial for the 21 victims of the school shooting 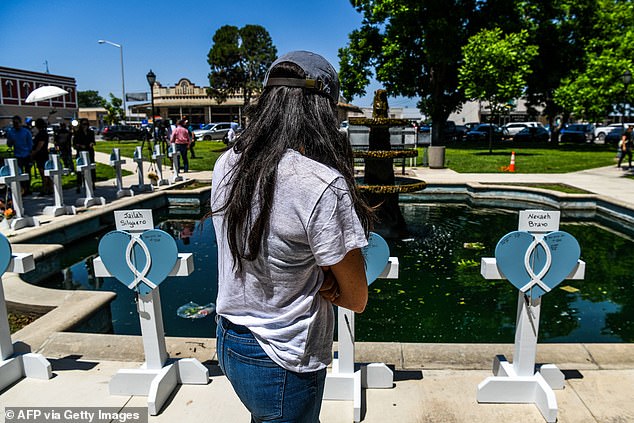 She told me: ‘Going to the jubilee is garish under the circumstances. She should have at least texted dad by now and communicated with him. There is no excuse for that. And even if he can’t talk, I’ve made it clear in public, she can communicate with him because he is reading his messages. There’s really no excuse.’

Many out there on the internet, especially the obnoxious Sussex Squad members, love to mock the Markles.

I think there’s a real class snobbery at play when that occurs. 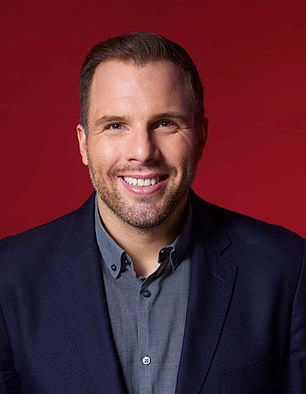 DAN WOOTTON: I find it unimaginable that Meghan Markle would travel the length of the country for a tacky photo opportunity, and not visit her father in hospital

Because all I’ve seen from the family this week is the sort of unconditional love you get from good clans during a crisis.

Tom spent about 20 hours driving non-stop to be by his dad’s hospital bed after only leaving him hours before the stroke to head to Oregon.

He has since cancelled all his plans in order to care for his dad in Rosarito, Mexico.

Samantha, meanwhile, has been battling her own private medical issues for the past two weeks.

She is currently in the process of securing a wheelchair small enough to fit through the doors at her dad’s home, but spends much of the day on FaceTime with her brother and text messaging her father.

This is not a family flush with cash, but they are determined that Thomas will receive the best rehabilitation to give him a fighting chance to regain his voice and eventually fulfil his dream of visiting London.

Medics currently predict six months to a year of almost-constant physical and speech therapy to achieve that goal.

Most importantly, they want the world to know that Thomas’s trip to London, which was due to take place this week, was not a so-called ‘stalking mission’ of Harry and Meghan, as some sources close to the Sussexes have implied.

I can vouch for that personally. 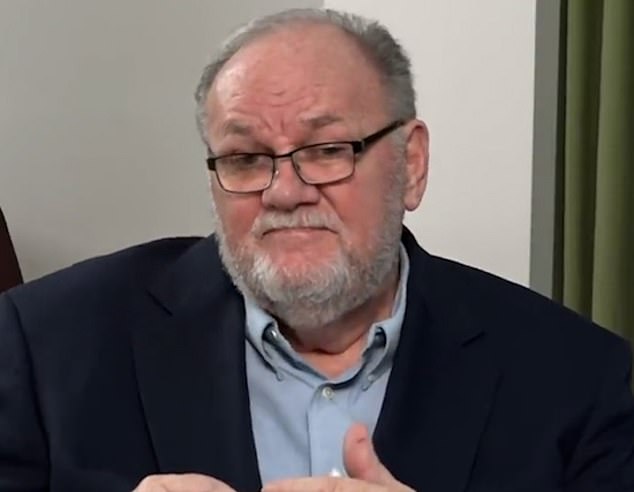 Days before he was due to fly to London for the first time for the Queen ‘s Platinum Jubilee, the Duchess of Sussex ‘s father Thomas Markle has suffered a major stroke that has seen him lose his speech

Tom was visiting the UK with my show Dan Wootton Tonight on GB News, where he was going to be a special correspondent and attend a number of high society celebrations with his friend Lady Colin Campbell.

Of course, he was open to meeting Harry and Meghan, but he’s been open to that opportunity for the past three years.

Charity starts at home, so that’s why I agree with Samantha that Meghan’s Texas stunt and her London visit now feel particularly garish in light of Thomas’s health battle.

But he’s at home in Mexico, awaiting that text message or visit from his daughter.

Just don’t ask Thomas to cut out his other offspring in order to reconcile with the Duchess – he won’t be asked to choose between his kids, and nor should he be.

Perhaps Meghan should be reminded of the kind words she authored for her dad on her internet blog on Father’s Day back in 2014.

‘My dad taught me to find my light,’ she wrote. ‘To my dad – my thoughtful, inspiring, hardworking Daddy – Happy Father’s Day. “If I had all the water in the world, I’d give all the water to you…” (You won’t get that quote, but he will. And for Father’s Day, that’s all that matters).’

The only thing in the world your dad now wants Meghan is for you to forgive him – do it before it’s too late.