The nine-figure gamble that NBC made on Megyn Kelly is not playing out how some at the network had hoped, as the Fox News transplant has struggled to find viewers.

Kelly’s declining ratings led the network to end her news magazine Megyn Kelly Tonight last summer weeks before its run had ended, and after a brief uptick in viewers earlier this year thanks tot he Olympics her Today hour has also started to plummet.

Those numbers are now having a negative impact on the fourth hour of Today, which is also dropping in total viewers.

There is also the fact that NBC has built Kelly a $10 million studio and is funding the show to the tune of $30 million annually reports the Wall Street Journal.

It is difficult to tell how NBC and Kelly hope to change their ratings problem since morning shows all relying on celebrity interviews to draw in viewers, a group that the host has no interest in chasing because she wants to avoid being a ‘celebrity-driven show.’

That feeling is very mutual however after her sit-down with Jane Fona in the show’s first week, which sources say resulted in publicists steering their A-list clients away from Kelly’s program.

Drip drop: Megyn Kelly Today is averaging 2.4million viewers per episode, an 18 percent decrease in total viewers from last season (Megyn holding up some nipple covers on her show Wednesday) 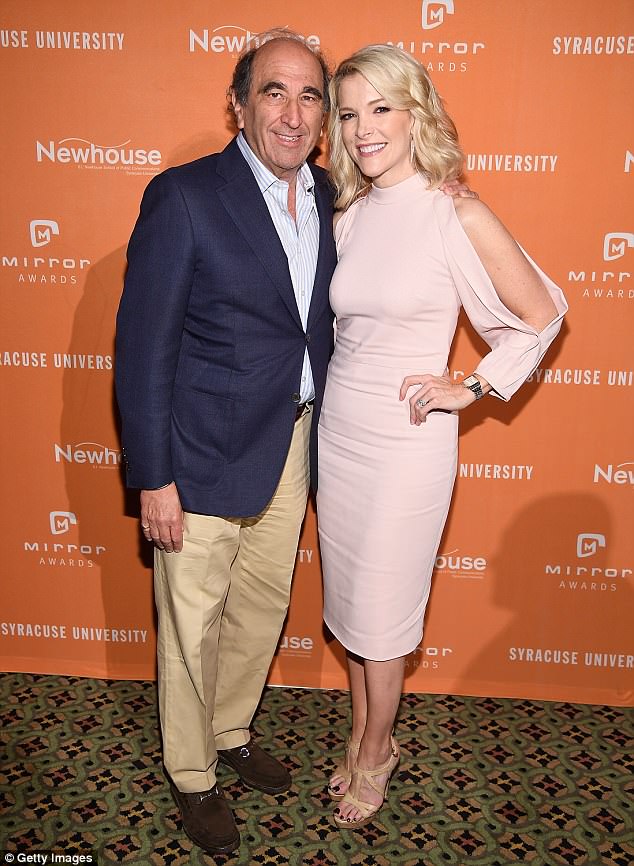 Plummet: The show is also down 28 percent in the key demo from last season, allowing Live With Kelly and Ryan to double their lead by 747,000 viewers (Kelly and the man who hired her, NBC chairman Andy Lack) 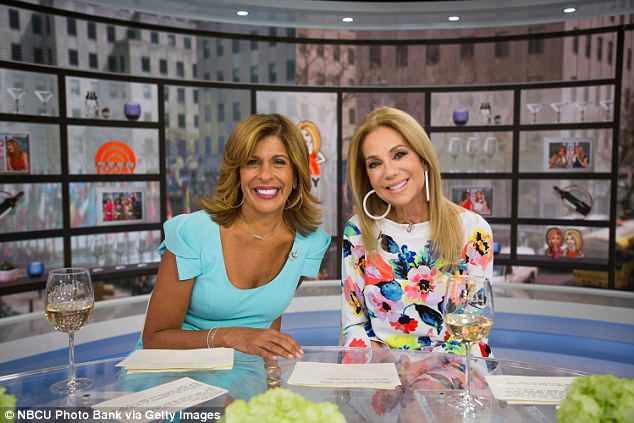 Impact: The fourth hour featuring Hoda and Kathie Lee, is down now as well by 6 percent overall and 19 percent in the key demo per Nielsen

DailyMail.com revealed last year that Kelly herself is signed to a three-year contract valued at $69 million, more than ten times what her predecessor Tamron Hall was paid and double the combined salary of Hall and Al Roker.

This sizable investment has resulted in a program that averages 2.4 million viewers an episode, which is 18 percent below what the hour was pulling in last season according to data from Nielsen.

Things get worse when it comes to the key demographic of adults aged 25 to 54, where the show is down 28 percent from last season.

The fourth hour featuring Hoda and Kathie Lee, is down 6 percent overall and 19 percent in the key demo per Nielsen.

This has been good news however for Live With Kelly and Ryan, with the syndicated show that is up against Kelly managing to double its lead by 747,000 viewers in markets where it is up against the NBC morning show.

Sources close to the show also claim that it is less profitable than its predecessor.

An NBC spokesperson responded to the report in the Journal by stating that Kelly’s show is profitable.

This is just the latest headache for NBC involving the third hour of Today.

It all began when the network made the decision to fire Billy Bush for his role in the infamous p****gate tape, a hot mic audio recording of him and President Donald Trump taken during his Access Hollywood years that he personally confirmed the existence of to the network.

He was just weeks into his new $10-million contract with Today at the time, having made the move to New York from Los Angeles.

NBC managed to bounce back nicely however with Hall and Roker, who proceeded to deliver solid ratings for three straight months in the wake of that scandal.

Then Hall and Roker got the news that they were being replaced by Kelly, learning their fate while on a seven-week streak topping the ratings during their hour.

Hall left work that day and never returned to NBC.

It was a shocking departure for a woman who had long been one of the hardest working personalities on the network, who on some days filled in for both Savannah Guthrie on Today and Lester Holt on NBC World News Tonight while also anchoring the third hour of Today.

On one day in December she filled in for both Guthrie and Hall while also hosting MSNBC Live and doing her third hour duties.

She also hosted Deadline: Crime on Investigation Discovery and Dateline Extra on MSNBC, as well as lending her on-air talents to NBC’s coverage of the Westminster Dog Show.

Dress for success: ‘Our show is a baby. We’re six months old. Morning TV is obviously new to me and I’m figuring it out as we go…I think any show needs about a year to just find its footing,’ said Kelly (above on Tuesday) 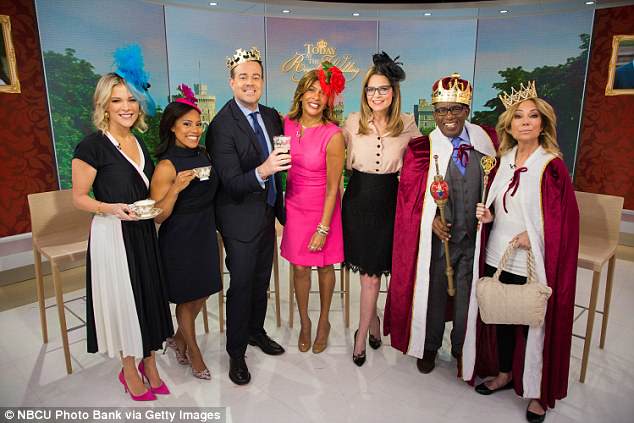 Roker anchored the third hour with Sheinelle Jones and Dylan Dryer in the wake of Hall’s departure, which also proved to be a winning combination.

Unlike Hall however, the meteorologist already had a steady gig on Today when he learned the news about Kelly’s arrival, appearing on the program’s first two hours.

He did manage to throw some shade at NBC executive by tweeting one day after learning Kelly would take over theor hour: ‘Congrats to our @TODAY 9am producers for producing the #1 morning show 7 weeks in a row!! @TamronHall and I are very blessed.’

‘Tamron is an exceptional journalist, we valued and enjoyed her work at TODAY and MSNBC and hoped that she would decide to stay,’ NBC News said in a statement on Wednesday.

‘We are disappointed that she has chosen to leave, but we wish her all the best.’

A source familiar with the discussions between Hall and the network told DailyMail.com at the time that Hall was offered a salary increase, despite losing her slot on Today.

‘NBC News very much wanted Tamron to stay, she was offered a multi-million dollar/multi-year contract and she chose to go,’ noted that source.

Kelly meanwhile is dismissing any concern, telling the Journal: ‘Our show is a baby. We’re six months old. Morning TV is obviously new to me and I’m figuring it out as we go…I think any show needs about a year to just find its footing.’

She then added that NBC had given her a ‘long leash,’ and noted: ‘I’m proud of the journalistic work we’ve been accomplishing. The ratings are important, there’s no question, but it’s not the only metric.’

One of those other metrics she is no doubt referring to are awards, with the show landing a Daytime Emmy nomination for Best Informative Talk Show.

Those awards will be handed out this weekend, and pit Kelly against Steve Harvey, Dr. Oz, Larry King and the The Chew.

Kelly responds to the short life of her news magazine, which has now been reduced to occasional specials, by explaining: ‘I don’t think I fully appreciated how much work the morning show was going to be and how many hours it was going to require of me.’