Melania Trump declared Tuesday evening she was excited to serve for six more years as first lady as she introduced her husband – President Donald Trump – at his formal launch for his re-election bid.

The first lady, dressed in a bright yellow jumpsuit, took the stage at the Orlando Amway Center with her husband to tune ‘God Bless the U.S.A.’

The crowded roared with the first couple took the stage.

‘It has been my honor to serve as first lady of this incredible country for the past two years. And I’m excited to do it for six more,’ Melania Trump said in her first campaign appearance for the 2020 election. 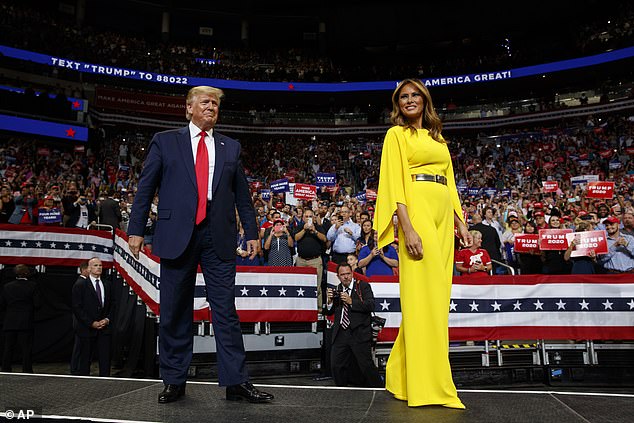 The crowd cheered her on and shouted ‘USA, USA, USA.’

Melania Trump’s short remarks didn’t get into specifics but she did express her pride in her husband’s administration.

‘I’m proud of all that my husband, this administration and our entire family have done on behalf of the American people in such a short time,’ she said.’

‘He truly loves this country and will continue to work on your behalf as long as he can. All of us will,’ she added.

The first lady wore a white dress and her signature high heels for the trip from the White House to Orlando.

But the yellow pantsuit she changed into made it easy for the crowd to see her in the 20,000-seat arena.

‘Thank you-all again for being here tonight and now, I want to introduce my husband, the president of the United States, Donald J. Trump,’ she said.

The first couple exchanged a hug and kisses on the cheek before the president began his speech.

He thanked his wife and even referred to her in his remarks.

The president was on a common complaint he often makes – Hillary Clinton’s use of a private email server – when he brought up the first lady.

He also paid tribute to the first lady’s work in combating opioid addiction, which is another part of her Be Best campaign.

‘We are confronting the opioid and drug addiction. And you know what’s happening. Drug addiction is the scourge of our country and many other countries. And we have made so much progress. So much progress,’ he said. 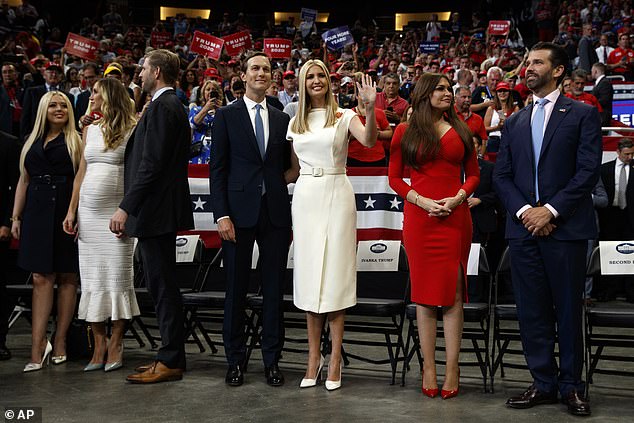 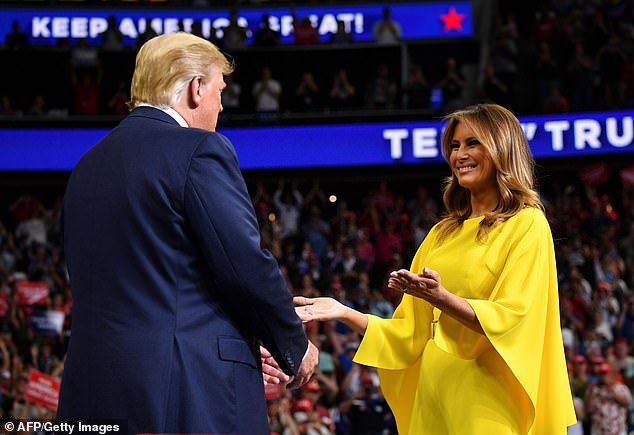 But the president also expressed his gratitude to his family, who stood to the side of the stage to cheer him on.

‘I am profoundly thankful to my family. I have a great family.’

He then mentioned his younger brother, his two older sisters and his deceased brother.

It was a family affair on Tuesday night in Orlando as all of Trump’s children – Donald Jr., Ivanka, Eric, Tiffany and Barron – attended the campaign rally. 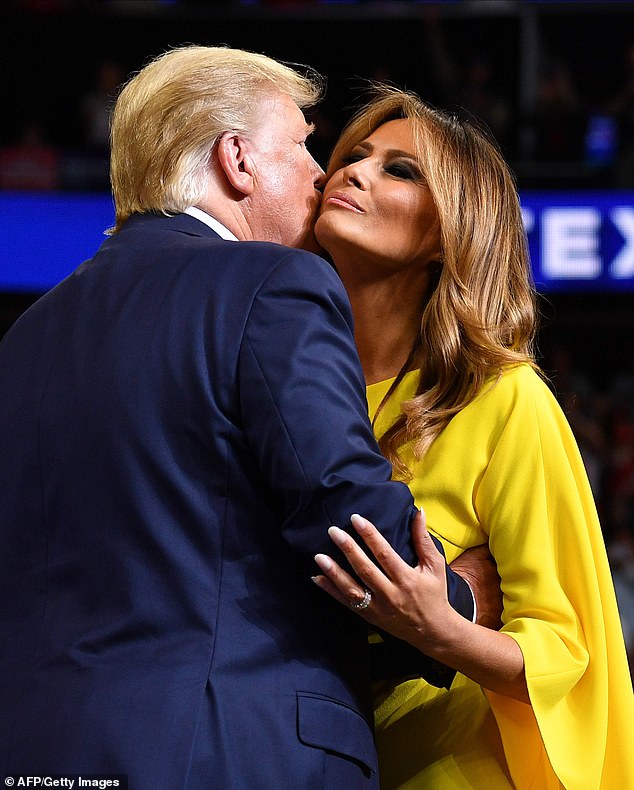 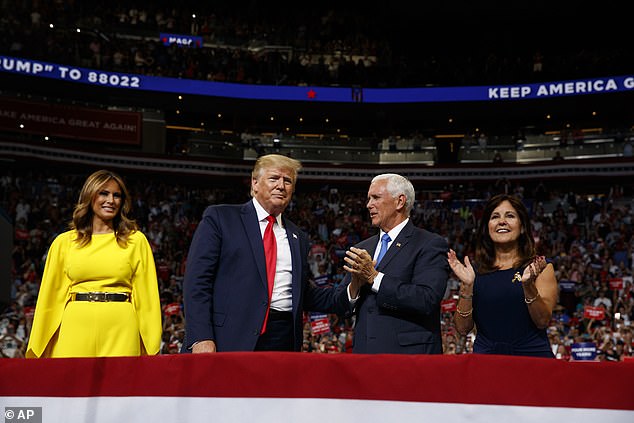 Vice President Mike Pence, with his wife Karen, spoke before the first couple came on stage

The elder three Trump children are a common sight on the campaign trail. Donald Jr., Ivanka and Eric often campaigned for their father.

The two eldest Trump sons warmed up the crowd ahead of the first couple’s appearance.

‘He gets up on the stump. It’s so stupid,’ he said, claiming the former vice president has four-person crowds. 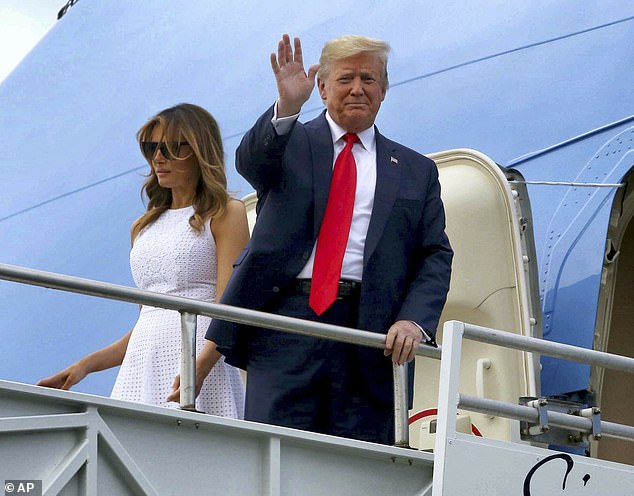 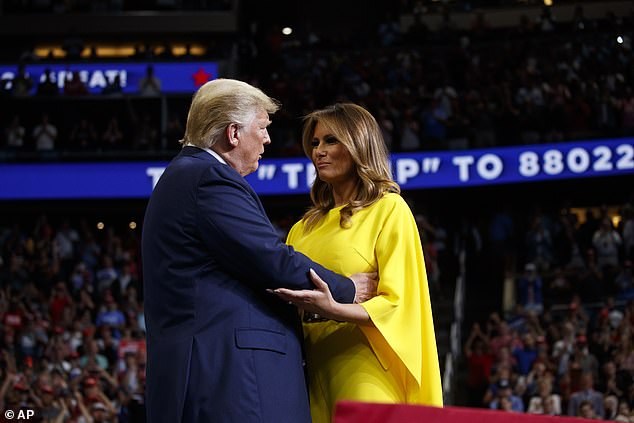 Don Jr. also mocked Biden’s pledge to cure cancer with his moonshoot project. ‘Why the hell didn’t you do that over the last 50 years, Joe?’ he asked.

But the first lady is a rare presence on the campaign trail.

She made few appearances for her husband in his 2016 bid and the East Wing has given no indication of her plans for the next year.

Melania Trump has spent much of her time as first lady focused on raising the couple’s 13-year-old son Barron, who she keeps out of the spotlight, and working on her Be Best campaign for children.

She also works on formal events the White House holds – such as the annual Easter Egg roll and the Christmas decorations for the executive mansion.

There’s also over a hundred permanent staff who work in the Executive Mansion that she oversee and she works with the White House Historical Association to help preserve the White House.

The first couple shared a rare romantic public moment on Tuesday as they left the White House for Orlando, Florida.

The President and first lady walked hand-in-hand across the South Lawn of the White House before boarding Marine One on their way to Trump’s 2020 campaign kickoff rally.

Cameras caught the couple sharing a warm smile as they held onto each other, Trump, 73, dressed in a navy suit and red tie and his 49-year-old wife took advantage of the June heat in a $2,290 summery white eyelet dress from Andrew Gin, and red polka-dot heels. 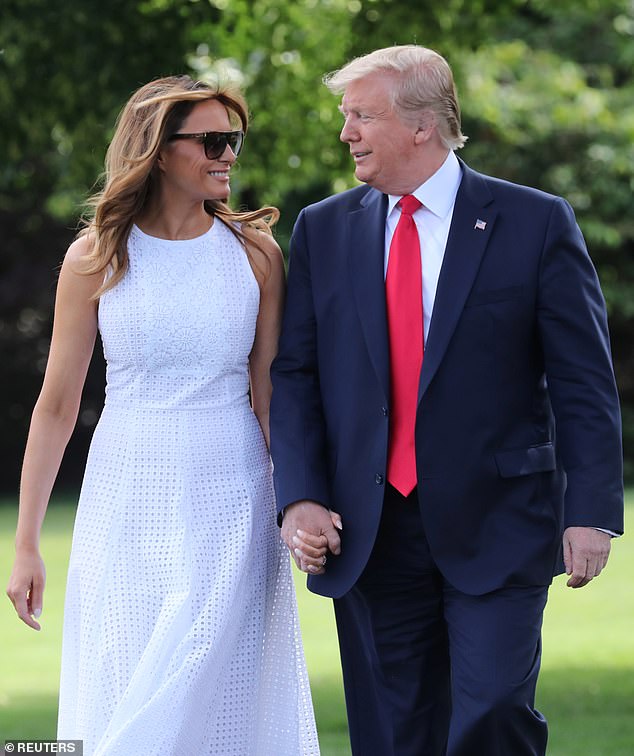 All smiles: Donald and Melania Trump held hands and beamed at one another as they walked across the White House lawn to begin their trip to Orlando, Florida, on Tuesday 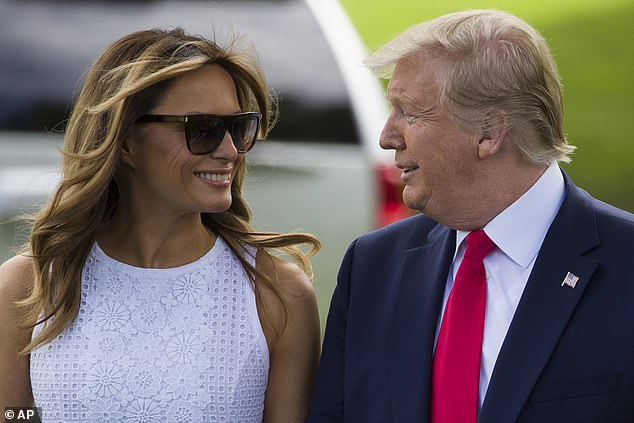 Ready to get away! The 49-year-old first lady couldn’t wipe the smile off her face as she and the president strolled across the South Lawn 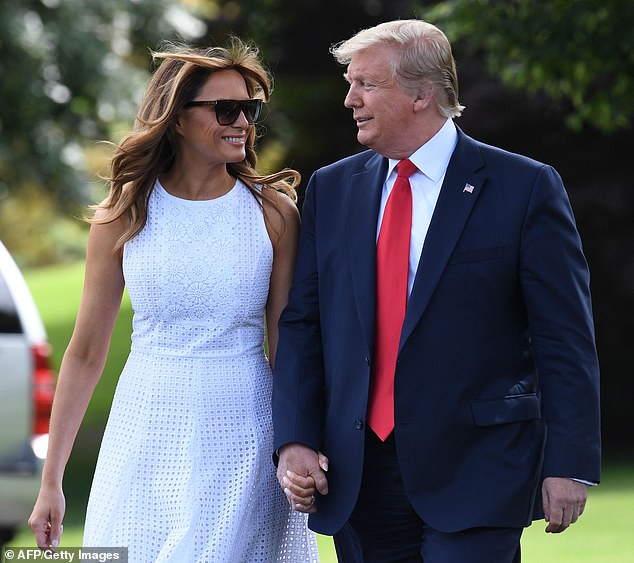 On their way: They appeared to be in good spirits as they set out for Orlando, Florida 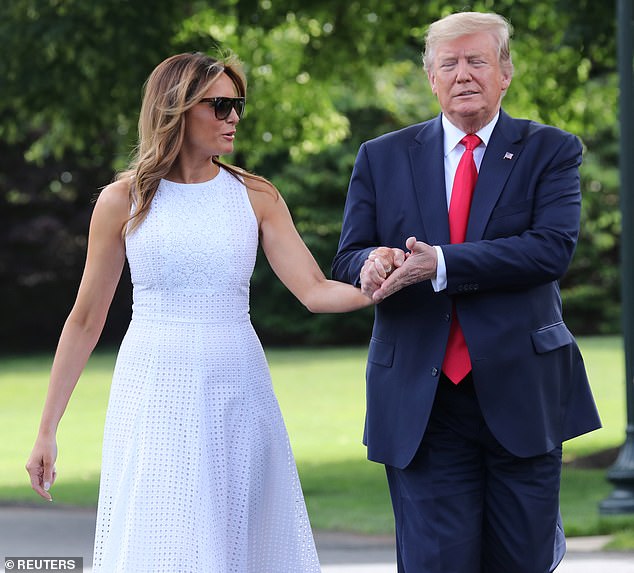 Hands on: At one point, Trump clasped one of Melania’s hands in both of his own

The couple isn’t typically much for PDA but shared an intimate smile as they walked passed photographers.

They held each other’s hands, with Trump stopping at one point in order to clasp Melania’s left hand in both of his own.

Melania beat the heat, which is hovering in the mid-to-high 80s in Washington, D.C. today, in a breezy but figure-flaunting white sleeveless dress, which featured a seasonally appropriate eyelet patter with floral cutouts on the top.

She accessorized with a pair of dark sunglasses and red and white pointy-toe pumps. while wearing her brown hair blown out around her shoulders.

The couple, who married in 2005, celebrated their 14th wedding anniversary in January, just one year less than he was married to his first wife Ivana.

The couple grinned as they boarded Marine One and then switched planes for Air Force One at Andrews Air Force Base in Maryland. 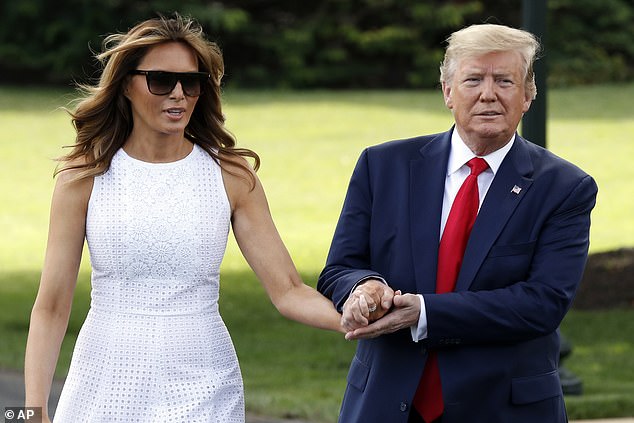 Hot out here: Melania wore a summery white eyelet dress for the occasion, as temperatures soared into the high 80s 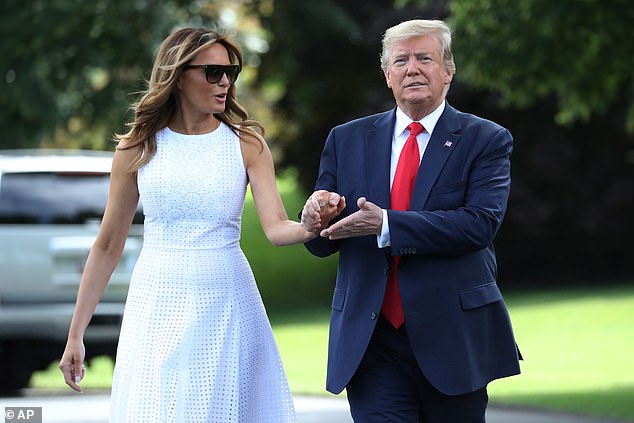 Protection: She shielded her eyes behind a pair of sunglasses 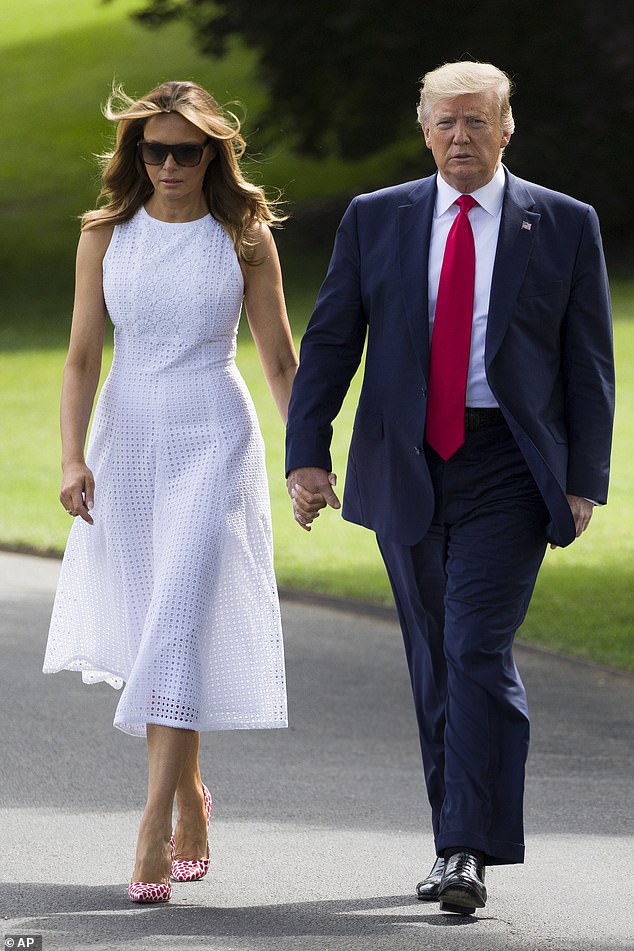 High heels: On her feet were a pair of red polka dot pointy-toe pumps 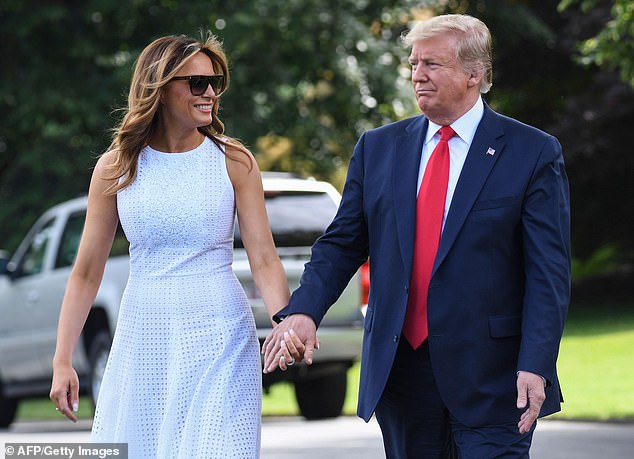 Ready to go: The well-coiffed first lady had her hair and nails done

They’re flying down not to Mar-a-Lago but Orlando, where Trump is kicking off his 2020 presidential campaign at the Amway Center in front of an estimated 20,000 people.

Trump’s campaign is transforming the area outside the arena to have a festival-like atmosphere, with music and food trucks to help supporters pass the time.

The most coveted positions are not seats at all, but standing positions near the front of the stage. Backers of the president in that area are likely to get a handshake, a selfie or Trump’s autograph at the event that formally marks the beginning of his campaign for a second term.

Beat the heat: Melania kept breezy in the lightweight dress, which will likely also serve her well in the Florida heat 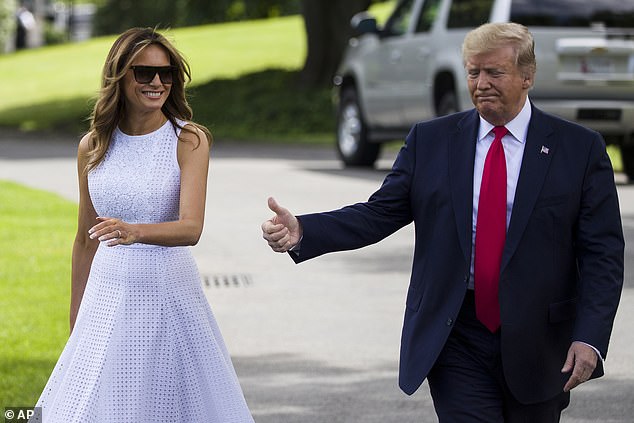 Staying behind: The first lady does not plan to make formal remarks on Tuesday night, her office said 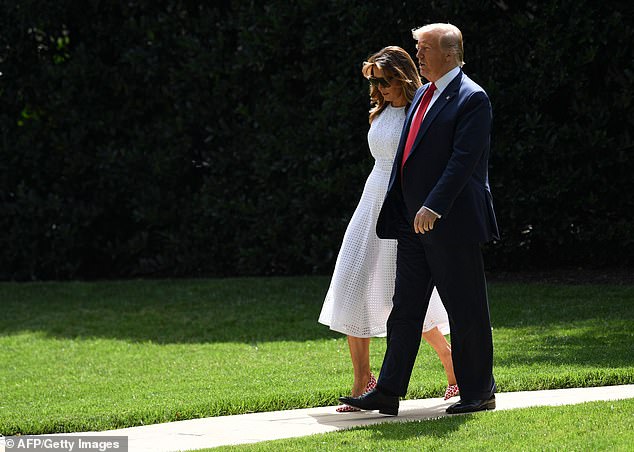 Change of plan? The couple’s 13-year-old son Barron is also expected to be at the rally, but was not seen traveling with them 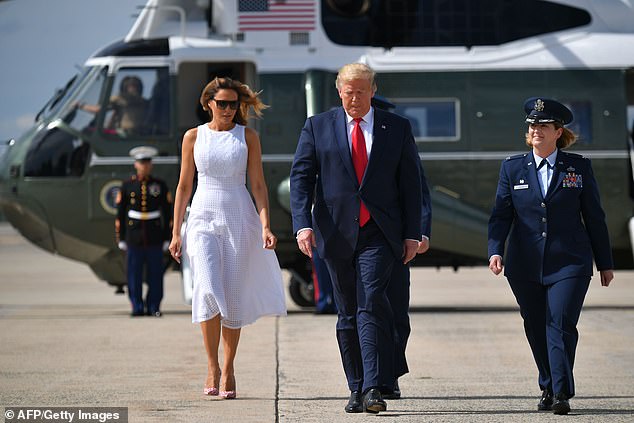 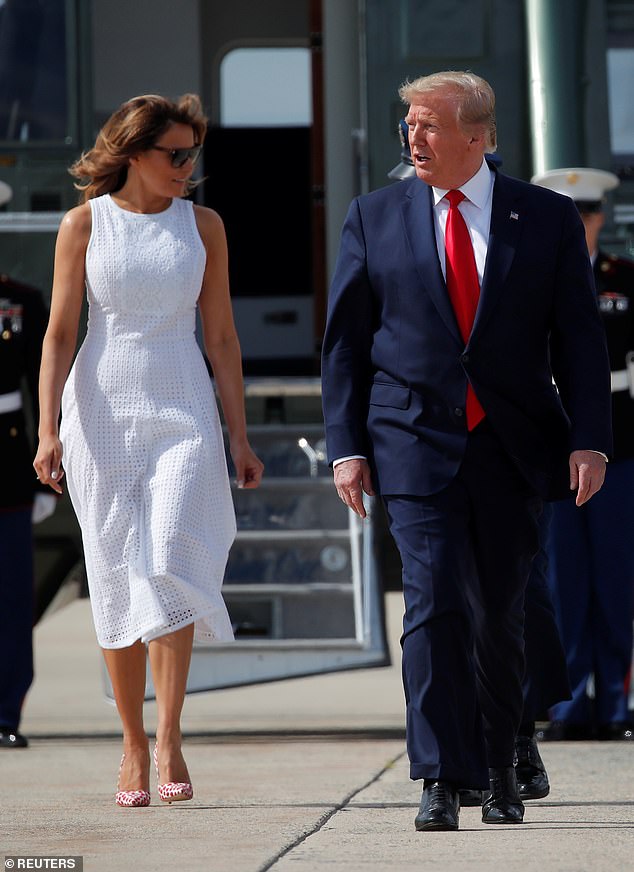 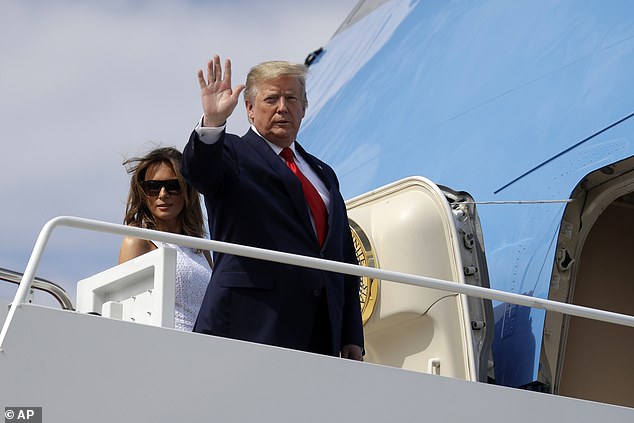 See ya! Trump waved goodbye as they boarded the plane together 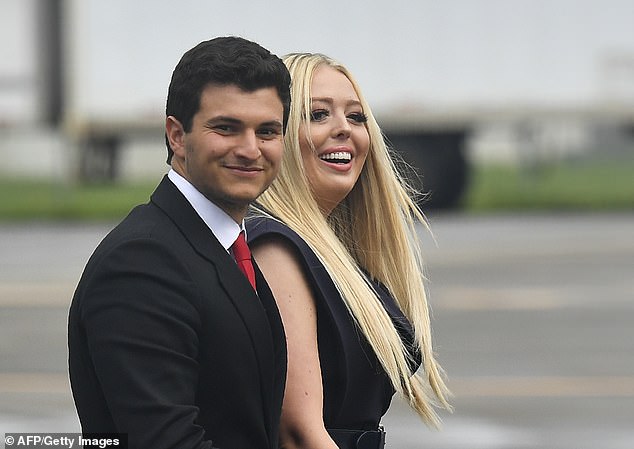 Trump’s youngest daughter Tiffany, who has been less involved than her older siblings in her father’s campaigns and administration, was also there with her boyfriend Michael Boulos.