Melania Trump had a bright smile on her face as she and Karen Pence visited the American Red Cross Headquarters in Washington, D.C. on Wednesday to assemble comfort kits for troops deployed overseas.

The first lady and second lady got into the holiday spirit as they happily put together the packages for military members who are stationed in Romania, Poland, Djibouti, Iraq, and Kuwait.

Melania, 49, donned a $550 camel-colored leather button-down from Equipment, which she wore tucked into a pair of cropped olive-green dress pants. 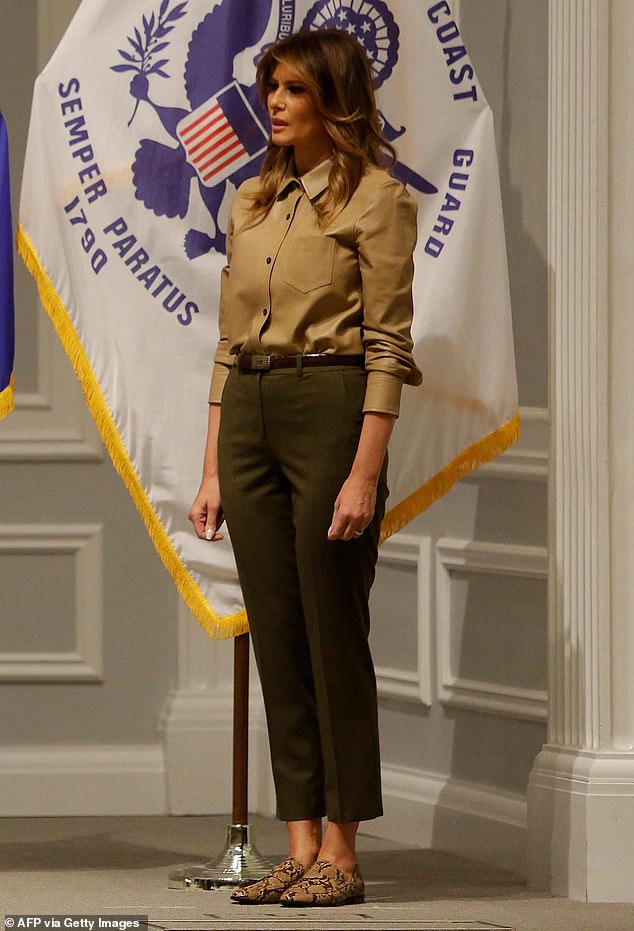 Outfit of the day: The first lady donned a $550 camel-colored leather button-down from Equipment, olive-green dress pants, and $50 loafers from Zara 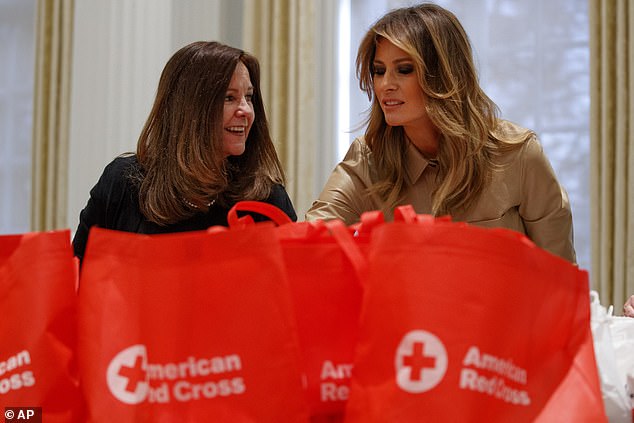 She cinched the waist of her pants with a thin brown leather belt with a buckle and opted for a pair of budget-friendly flats instead of her go-to designer stilettos.

The former model’s tan and black python-print loafers from Zara sold for just $50 last fall, and this isn’t the first time she has worn them.

Melania paired them with a similar safari-inspired outfit while visiting Ghana in October 2018.

While she wore shades of tan and green, Karen, 62, sported a black top tucked into a cream and taupe skirt with black piping. She accessorized her look with black tights and heels. 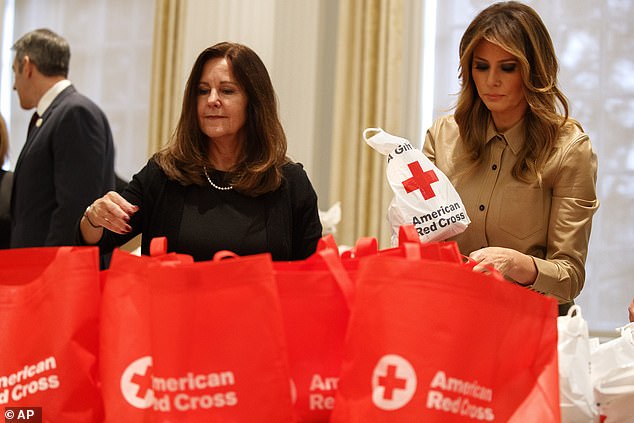 Team work: They joined a dozen Cabinet secretaries’ spouses as they put together the comfort kits for troops stationed in Romania, Poland, Djibouti, Iraq, and Kuwait 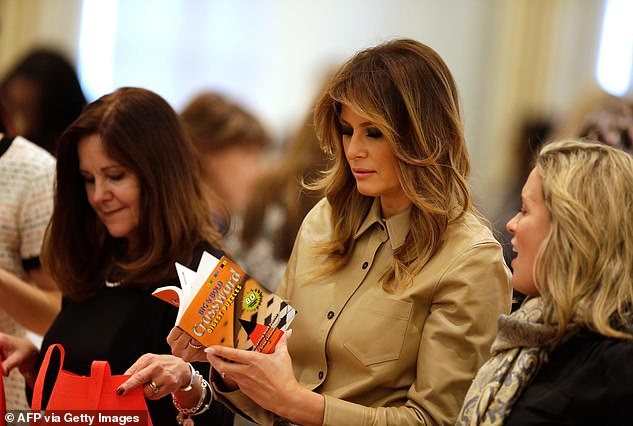 Added touches: The holiday care packages included snacks and games for the troops 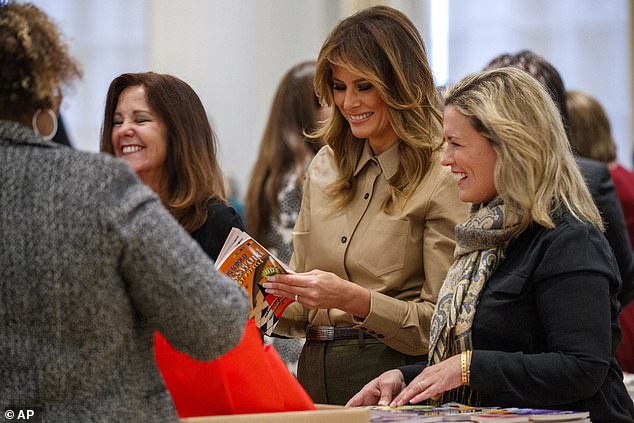 All smiles: Melania seemed to be in great spirits as she helped bag the bags 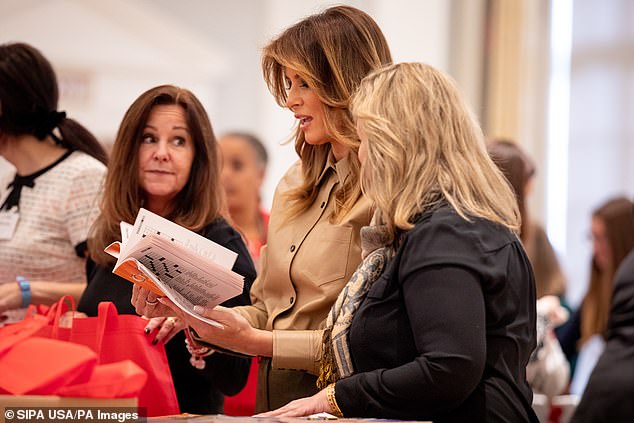 Check this out: At one point, she was seen flipping through a book of crossword puzzles

Like Melania, she wore a belt around her waist and her dark hair loose around her shoulders, though that’s where the similarities ended.

The first lady is known for her minimalist style and isn’t one to wear a lot of jewelry aside from a few key pieces, but the second lady had on a pearl necklace, a watch, and bracelets on her wrist.

Melania and Karen were joined by a dozen Cabinet secretaries’ spouses as they stood in an assembly line and put together the comfort kits for the troops.

The holiday care packages included snacks and games, and at one point Melania could be seen smiling while flipping through a book of crossword puzzles. 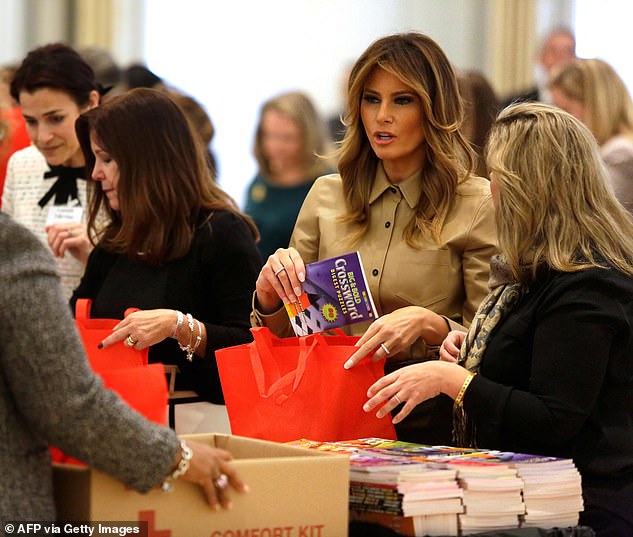 Getting along: The first lady happily chatted with the woman next to her while volunteering 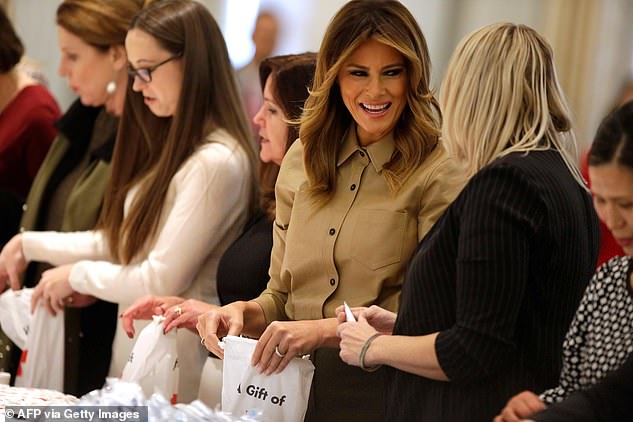 Feeling good: Melania had a big smile on her face while talking with a fellow volunteer Tradition: This is the second year in a row that Melania and Karen have participated in the program 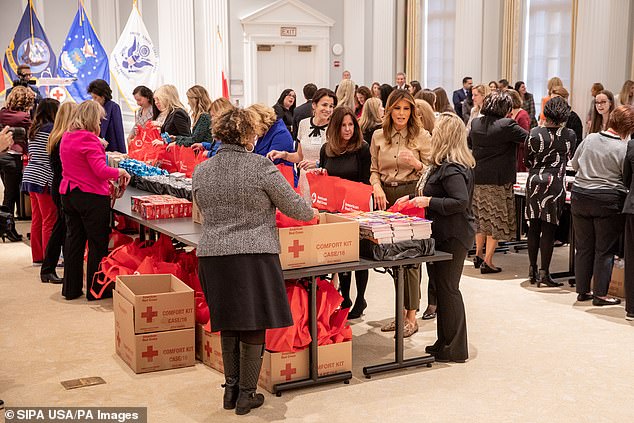 Focused: The women stood in an assembly line while packing the holiday care packages 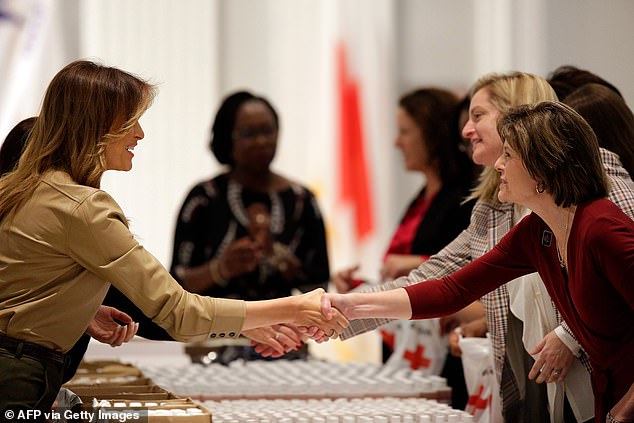 Meet and greet: Melania and Karen shook hands with the volunteers at the event 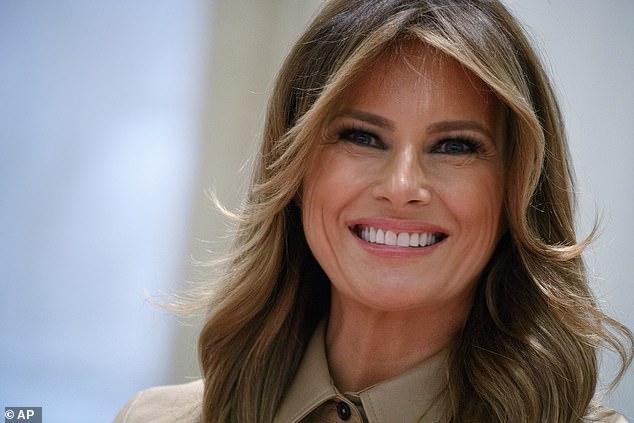 Happy place: Melania seems to take great joy in volunteering, especially when she is working with kids

Each kit also featured a note from Melania and Karen wishing each and every troop a happy holiday.

‘Along with the spouses of the President’s Cabinet and those of our courageous men and women in uniform, we packed this kit to express our gratitude for the innumerable sacrifices you have made in defense of our freedom,’ the message reads, according to United Press International.

‘We pray that during this Christmas season the love, respect and gratitude of our nation uplifts and protects you. May God continue to watch over you and all our nation’s service members.’

Melania seemed to be in great spirits as she chatted with Karen and another woman while putting together to the kits.

‘While most Americans are able to enjoy Thanksgiving and Christmas with their families, we have thousands of American troops deployed overseas separated from their loved ones,’ she said. 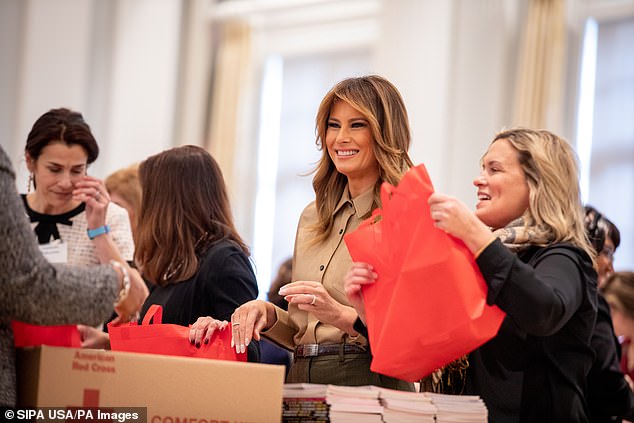 Season’s greetings: Each comfort kit also featured a note from Melania and Karen sending them well-wishes over the holiday season 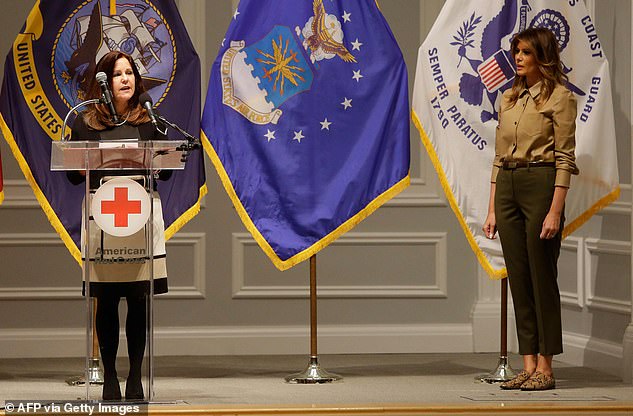 Big moment: Karen introduced Melania while she waited on the side of the stage 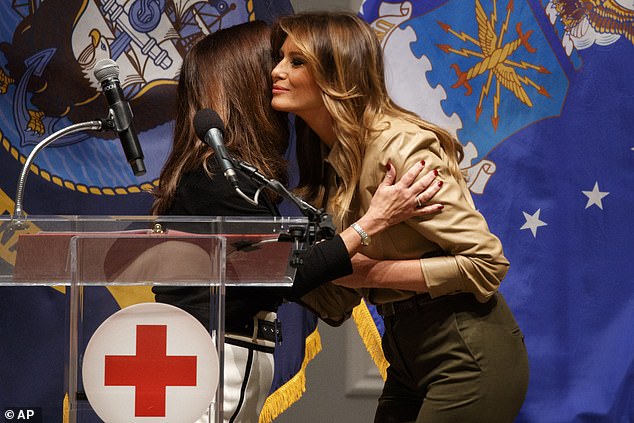 Sweet: The two women shared a warm hug before Melania got behind the podium 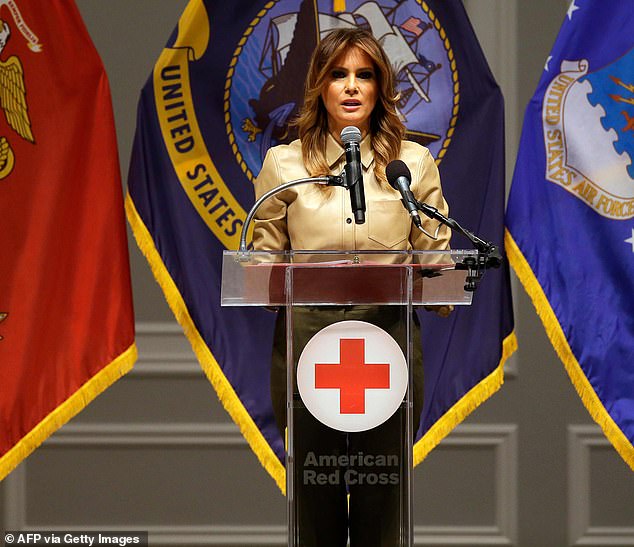 Spreading the word: Melania said it is important that Americans do all they can to support the troops 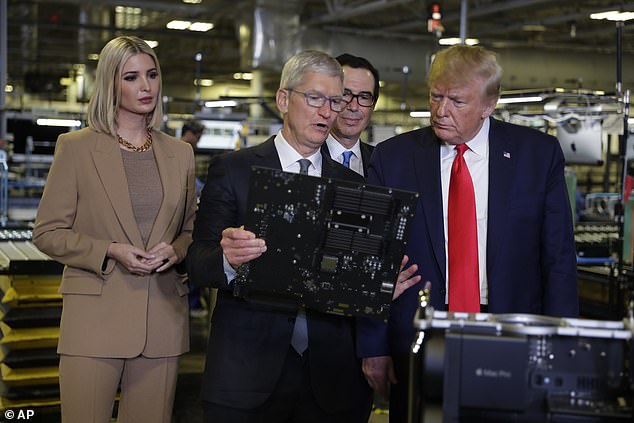 ‘It is important as Americans to do all we can to support our troops and their nation’s freedoms.’

This is the second year in a row that Melania and Karen have participated in the program, and the former urged others to volunteer as well.

‘I encourage people everywhere to participate in an act of service this holiday season and give back to our military, who protect our nation’s freedoms,’ she said. ‘One of the greatest privileges I have as first lady is traveling across our great nation and around the world, meeting troops and their families.’

He was joined by his daughter and senior adviser Ivanka Trump on the trip as well as U.S. Treasury Secretary Steven Mnuchin and Director of the National Economic Council Larry Kudlow.