MELANIE MCDONAGH: Sir Philip Green is a creep and a bully, but that isn’t a crime…yet

Not as nice as he looks, that Philip Green, is he? In fact, he sounds a beast to work for – rude, bullying and overbearing. And his initial failure to come to the aid of BHS pensioners – as its chairman, he presided over a deficit of £571 million – was indefensible.

Turns out he sent a ‘torrent’ of unpleasant late-night texts to Ros Altmann, who was Pensions Minister when he was in the middle of the row over the issue – messages which she says were ‘frightening’ and ‘beyond the bounds of decency’.

Then there are the stories about his behaviour at work – allegations, apparently, so bad he was prepared to pay a seven-figure sum (that’s right, over a million quid) for non-disclosure agreements to stop them coming out.

Not as nice as he looks, that Philip Green, is he? In fact, he sounds a beast to work for – rude, bullying and overbearing

The Telegraph revealed all this last week, without naming him. It was Peter Hain, the Labour peer (who it turns out is a paid adviser to the Telegraph’s lawyers) who identified Green as the alleged offender in Parliament.

But what were those allegations? Well, we don’t know because of the gagging clauses. So all we can make our judgments on is the material in the public domain, which includes Altmann’s testimony and that of an anonymous insider who spoke to The Guardian. 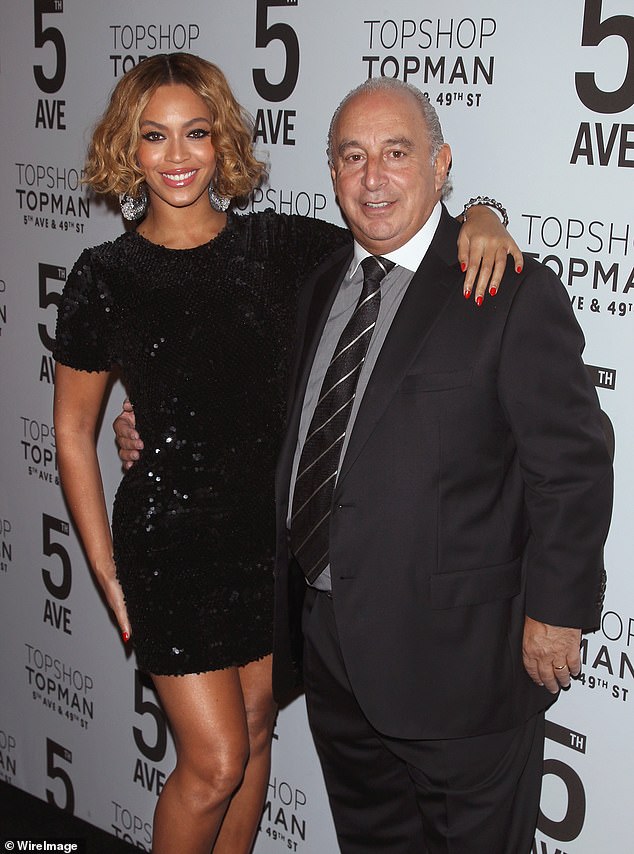 The allegations include ‘walking into meetings and giving the women present lingering hugs’; ‘creeping up behind women to make them jump, before caressing their shoulders to reassure them’

But from what we have been told so far, the allegations include ‘walking into meetings and giving the women present lingering hugs’; ‘creeping up behind women to make them jump, before caressing their shoulders to reassure them’; ‘calling women ‘sweetheart’, ‘darling’ or ‘love’ rather than by their names’; ‘telling women they were overweight and should go on a diet’ and ‘flying into expletive-ridden rages, abusing male and female staff in front of colleagues’.

To which my considered response is: What? A million quid? For this?

It’s plain he’s an overbearing creep, but is this it? Why didn’t I work for him and get paid large sums for not taking him to court for calling me ‘sweetheart’?

Bad language is unpleasant and you can’t imagine Jacob Rees-Mogg using it, but it’s not exactly Harvey Weinstein, is it?

But that’s the thing. Because of the nondisclosure agreements, we assume the worst.

Why Halloween’s a real horror show

‘HAPPY Halloween’ sounds all wrong. If it’s meant to be the Night of the Living Dead or whatever, ‘happy’ doesn’t come into it.

There’s not much right about how we do Halloween in Britain. I feel proprietorial about it, because I grew up with it in Ireland where it was marked because it is the night before All Saints’ Day.

For children, it was a time for dressing up in a mask and your parents’ old clothes – and going round to people’s houses holding out a bag for nuts, apples and loose change. But some time in the 1980s, the thing migrated to America and came back transformed into a commercialised gorefest to displace Guy Fawkes night.

The problem is, Halloween was the product of a Catholic culture; Guy Fawkes of a Protestant one.

I instantly thought of Weinstein when I heard about them. But he, remember, is accused of coercing women into having sex with him. Horrible stuff.

On the basis of what we know so far, Green’s behaviour isn’t remotely in that league.

Take Ros Altmann’s testimony. He tried to meet her while he was being investigated by the Pensions Regulator about the BHS deficit; correctly she refused. But he carried on bombarding her with texts.

After she gave evidence against him to the parliamentary committee investigating the pensions scandal, he phoned her to warn her not to speak against him.

She feels he bullied her because she’s a woman. Really?

She was a Government Minister and as such, a prominent public figure; she didn’t have to accept discourtesy. How about telling him to get lost?

As for Peter Hain, who rode roughshod over the judgment of the Appeal Court by naming Philip Green in Parliament, he doesn’t come out of this well.

At best, he went in for moral grandstanding; at worst, he showed contempt for the law.

But there is a way out of this. The Telegraph has called on Green to release his employees from the non-disclosure agreements so they can air their complaints (presumably they’ll also want to return his money). He should.

Further, the Appeal Court judges who upheld his claim to anonymity said that there should be a trial as soon as possible – this would enable the issues to be aired in court.

But, so far, I can’t see that he’s committed any criminal offence. He’s a creep and a bully, by the sounds of it. But calling someone ‘sweetheart’ isn’t a crime. Yet.

The actress who’s closing all the gaps

That sum, which includes commercial spin-offs, puts her way ahead of her nearest male rival, Jim Parsons of The Big Bang Theory

So much for the gender pay gap. Forbes magazine says that Colombian-American star Sofia Vergara, left, is now the highest paid actor on US TV, for her role in Modern Family, a mockumentary sitcom about, yes, a modern family. That sum, which includes commercial spin-offs, puts her way ahead of her nearest male rival, Jim Parsons of The Big Bang Theory. What’s more, Vergara is 46. So she’s closed the age gap as well as the pay gap.

‘This is the natural conclusion of any intelligent theologian’s journey. All scripture study leads to Islam. Which makes all other scriptures redundant. I will be given (another) new name. It will be Shuhada’.’

Not so fast, Shuhada. I know lots of highly intelligent theologians who do not share your need to ditch the gospels for the Koran. But there is a bright side – she’s got herself noticed. Her only UK No 1 hit was in 1990.

Stella Creasy MP has got an amendment through the Commons to oblige the Northern Ireland Secretary to ‘issue guidance’ on its abortion law. She wants it liberalised. When will this busybody realise that if people there think differently from her on this, it’s not because they’re thick or backward – they just take prenatal human rights more seriously than she does?