A teacher has been filmed erupting at a female student in a Catholic school classroom.

The confronting incident unfolded at the Emmanuel College in Point Cook, south-west Melbourne.

Footage that recently surfaced online – but was filmed three years ago – showed the teacher unleash an expletive-laden rant in the packed classroom.

‘What do you mean why?’ he is heard shouting at the schoolgirl as he exploded into a fit of rage.

‘Why even ask that in the first place?’

The teacher became increasingly angry and was heard repeatedly saying the F word.

The short clip was shared to social media this week, with dozens of students rushing to the teacher’s defence.

One man who claimed to be a former student at the school said the teacher involved was a ‘lovely, fun’ man and that the outburst happened on the anniversary of his father’s death.

Another former student said he was the ‘chillest’ teacher and those in the class had been purposely disobeying him to push him over the edge, with one even ‘faking a seizure’.

‘He’s obviously been pushed over the edge and snapped, I feel sorry for him,’ another wrote.

Others argued it was never appropriate for a teacher to act in that way.

‘As a teacher myself, this is insane. He should have handled it a lot better,’ one person said.

‘This is unacceptable behaviour from any teacher regardless of what has just happened prior,’ another commented.

A spokesperson for the college confirmed to Daily Mail Australia the incident happened three years ago.

‘The College is aware that it has recently resurfaced. This matter was dealt with at the time through the appropriate processes,’ they said. 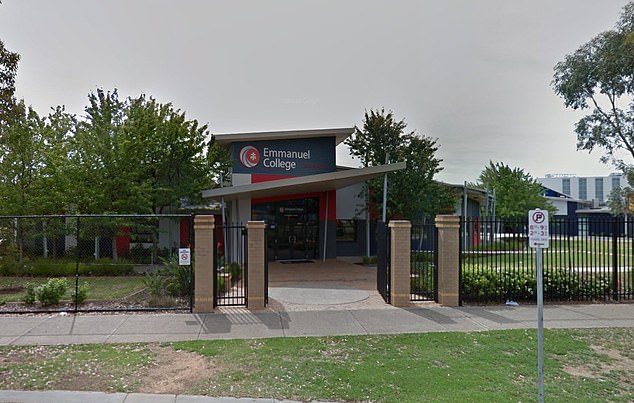 The incident happened three years ago at the Emmanuel College in Point Cook, Melbourne