Daisy Pearce has led the Demons to a fairytale AFLW premiership, after defeating a dogged Lions side by four points at the brand-new Springfield Stadium in Brisbane on Sunday afternoon.

An emotional Pearce, the most legendary player in the female game, strongly brushed away questions about retirement immediately after the match – preferring instead to lavish praise on her teammates after the club’s first AFL flag.

Tayla Harris and Blaithin Mackin each scored goals as the wayward Dees posted 2.7 – 19 in the somewhat wild Brisbane weather, while Cathy Svarc and Dakota Davidson booted six-pointers as the Lions finished 2.3 – 15.

Harris, who carried a shoulder injury into the match, is finally a premiership winner after playing in three losing grand finals for three separate clubs.

But it was all about Pearce, the 34-year-old mother of twins, who just keeps on keeping on; and if her performance during this game and the entire of 2022, she ain’t finished leading just yet.

‘I’m just so proud of our group, They just played their absolute hearts out … we found a way just through sheer heart and our spirit,’ an emotional Pearce said on Channel 7’s broadcast after the game.

‘Her (Kate Hore) last quarter and Tyla Hanks as well, the ability to run out that game the way she did, I think she is the most underrated player in the competition, Tyla Hanks.

‘We don’t care where we play, we are going up there to win it. They invited the wrong team for their house warming,’ Pearce said of playing at Brisbane’s headquarters, Springfield Stadium; the first time it has hosted a game. 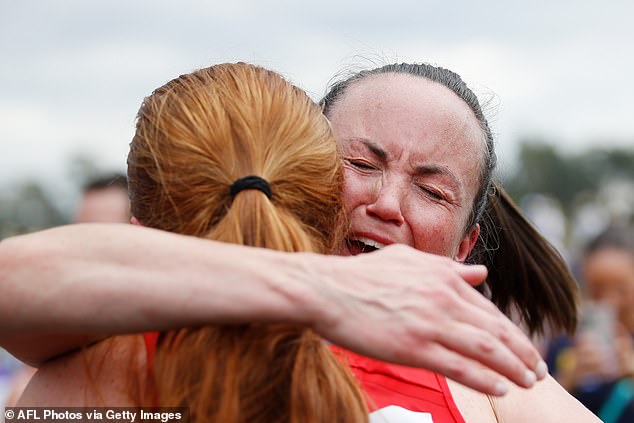 Of course the question on everyone’s lips was whether Pearce would follow Joel Selwood’s lead and retire from one of the great careers after a fairytale flag.

Seven commentator Abby Holmes was brave enough to ask, but she very quickly got shut down by her broadcasting colleague.

‘I’m not thinking any further ahead than right now. Don’t make any me even think about it and rob me of these moments … I’m just so, so proud of this team,’ Pearce said when asked whether it was her last game.

‘I’ve felt uncomfortable the whole time, the narrative about it being about me. I feel like that’s a glorified thing that happens outside the four walls.

‘In here (at the Demons) all that happens to me is I get the s**t taken out of me. (I’m the butt of everyone’s jokes, but no coincidence, I come here and keep playing,’ laughed Pearce. 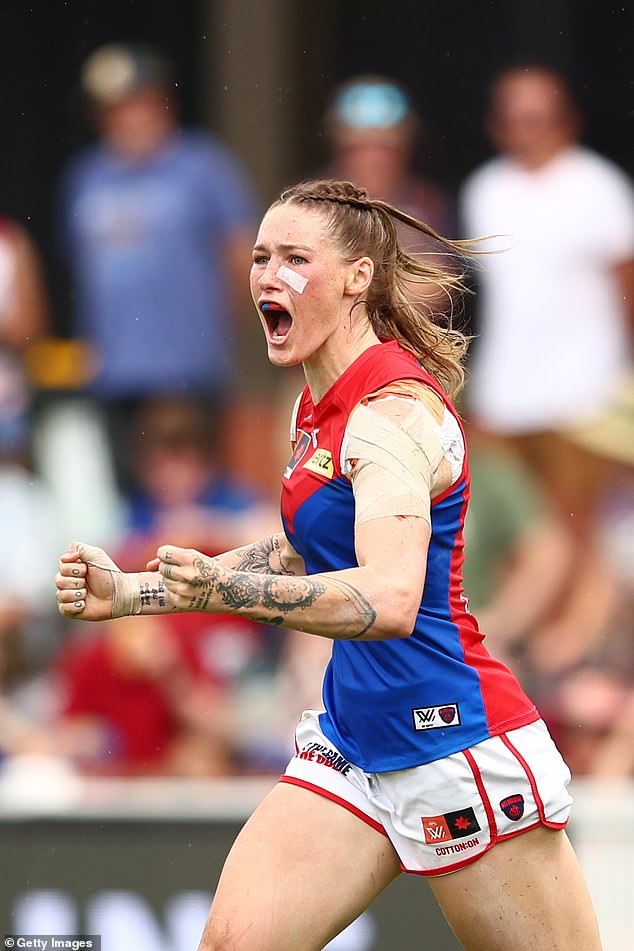 ‘No-one spoke about it (Pearce’s potential retirement), but it was definitely a factor,’ she said after the game.

‘She is one of the best humans in the world and we’re so happy we could get it done for her. She’s the best human I’ve ever met and so proud of what she’s done for this club.

‘Springers went off’, as multiple AFLW stars said, as a sold-out crowd packed into the brand-new stadium in Brisbane’s south-west for its first-ever game. 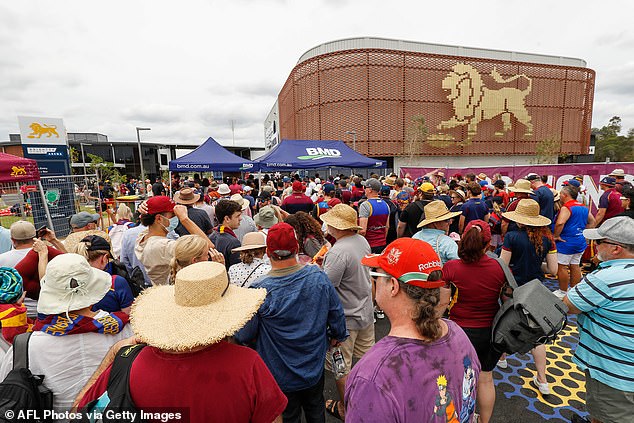 Fans packed into the brand-new Springfield Stadium in Brisbane’s south-west, with the match a sell-out 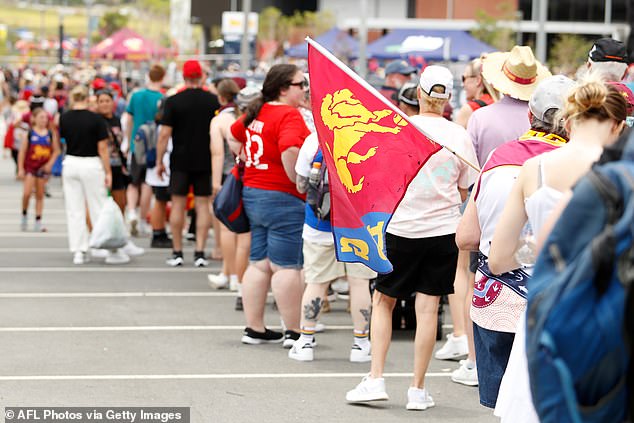 It was the first game, at any level, at the venue, and fans were seen lining up way through the carpark before the match

Aussie superstar Delta Goodrem provided the pre-match entertainment, and fans were left stunned as the 38-year-old wore a glamorous black jumpsuit and turned back the clock with a generous helping of her most iconic hits.

Innocent Eyes, Lost Without You and Sitting on Top of the World were just some of the dual-threat performer’s songs she tore up the stage with, much to the delight of fans at the stadium and watching at home.

It comes just a month after the Born to Try singer shared the stage with Robbie Williams at the AFL Grand Final; which was the most popular pre-match entertainment in recent memory. 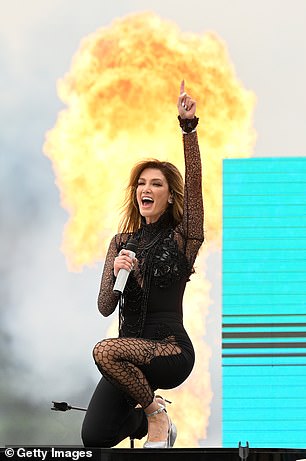 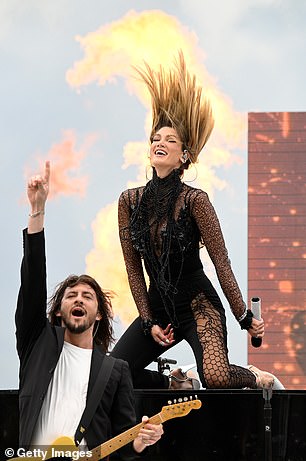 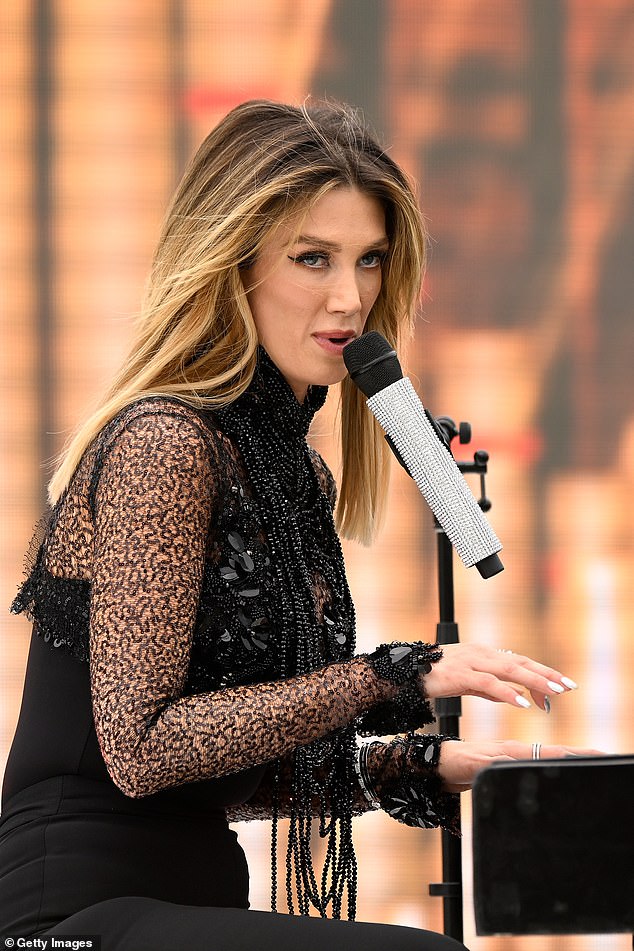 The ‘Born to Try’ singer performed such hits as Lost Without You, Innocent Eyes and Sitting on Top of the World, much to the delight of footy fans

‘This moment slayed me! Bravo, Delta Goodrem’, ‘Delta Goodrem again knocking it out of the park with her performance’ and ‘Can we have Delta Goodrem do every pre-game entertainment going forward?’, was just a tiny smidgen of the adoring praise that almost broke Twitter.

Goodrem was followed by yet another stunning rendition of the Australian anthem by the everywhere man Cody Simpson, who is clearly equally as adept inside and outside the pool.

And then came the footy.

The Lions got off to a quick start in the first quarter in front of their raucous home crowd, with Davidson booting home the first goal of the game eight minutes in off the back of a pinpoint Nat Grider pass.

A goal from Cathy Svarc followed just moments later, and when Grider pulled off possibly the best highlight of the game with a stunning, Heath Shaw-esque run-down tackle to stop a certain goal – it looked like they would be incredibly tough to beat.

But the Lions could not manage a goal for the entire rest of the game, and were thoroughly outplayed by the dogged Demons side, who went into the match as rank outsiders.

Midfielders Eliza West, Olivia Purcell and veteran Karen Paxman were immense for the Dees, but Pearce said after the game one person stood out in particular as important to the club’s culture.

‘Mick Stinear, he is a world-class coach. He is an amazing person, and he has built this program from the ground up,’ she said after the win.

‘He is the heart of this team, and I just play for him,’ said Pearce of the quietly-spoken, modest mentor. 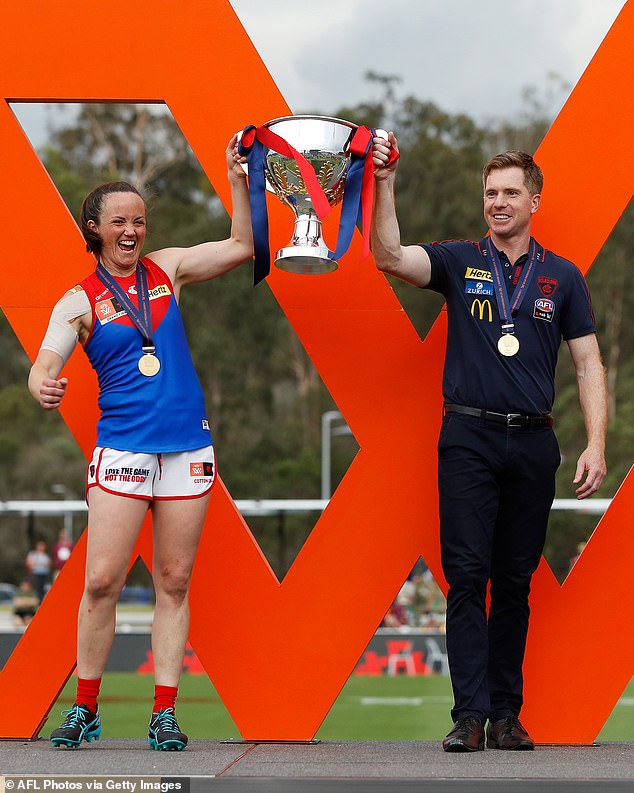 Brisbane certainly did not disgrace themselves, and refused to give up as the game began to slip away.

Such was her incredible dominance down back, nuggety defender Shannon Campbell – the immoveable wall – was awarded the Best on Ground medal, and then proceeded to give one of the more iconic acceptance speeches.

‘Sorry, if I can’t talk very well, I’ve just been over there vomiting, so apologies,’ she hoarsely said on the presentation stand.

To the crowd, our families, all the supporters, both the Dees and the Lions fans, thank you so much for getting around Springfield this week, as Greta said earlier, ‘Springers was going off’, so thank you for making it such a great spectacle.

‘Thank you, everyone, from our group, our club, from the top through to the bottom … I’m so f***ing proud of you. Sorry! I shouldn’t have sworn. Sorry, Iam so sorry,’ said Campbell, much to the delight of the entire stadium. 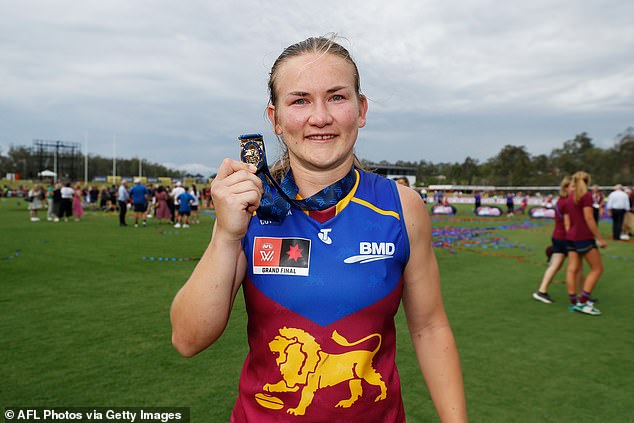 AFL CEO Gillon McLachlan might not have attended, because he didn’t rate the league enough to change his holiday, but that didn’t matter to the jubilant Demons – who will no doubt be celebrating long into the evening.

‘I can’t wait to celebrate this (Premiership) with you girls forever,’ said Pearce, before she raised the trophy.