Two on-duty police officers have been filmed buying groceries for a homeless man and giving him a warm dinner to get him through a cold winter’s night.

Melbourne-based blogger Adele Barbaro captured the heartwarming gesture as it unfolded outside of her local Woolworths on Sunday night.

The mother-of-two had driven to the supermarket to buy some groceries and was rugged up to stay warm in the cold weather as the temperature dipped to 4C.

She took to Facebook to reveal she had just parked her car outside the store and was making a beeline straight for the entrance when the officers caught her eye.

It is cold tonight, I was rugged up as I walked through the car park of my local Woolies. A few steps ahead of me were 2…

‘A few steps ahead of me were two police officers heading straight for a homeless man sitting at the entry,’ she wrote.

‘He had a handwritten sign requesting spare change so he could get some food.

‘As the officers approached him, instead of saying ‘time to move on’ or ‘you know you can’t be here’, one of them said ‘What brings you out in the cold tonight mate?”

Ms Barbaro said she overheard the homeless man say he was hungry before she walked into the store.

‘As I made my way through the automatic doors I could hear the officers say, ‘We just wanna make sure you’re OK mate”.

Ms Barbaro said she started to walk up and down the aisles and fill her trolley with groceries when she noticed the officers pick up a few items themselves.

‘I saw the two officers inside with a hot roast chook and some bread-rolls and figured they were getting themselves late shift dinner,’ she wrote.

‘But then I noticed staples like rice and cereal and one of the said ‘we probably need to get him some milk too.’

Ms Barbaro then pulled out her mobile phone and filmed the officers scanning the items at the checkout.

‘We ended up at the checkout at the same time, they had split up and seemed to do half the groceries each and both pulling out wallets/purses to pay half each,’ she wrote.

The officers are then seen in the video walking back to the homeless man with a green bag filled with groceries.

One of the officers pulls out the groceries one item at a time to show to the homeless man before handing over the bag to him.

‘As they went outside I overhead them check again that he had somewhere to stay tonight and then they handed him the bag of food with respect, compassion and kindness,’ Ms Barbardo said.

The touching footage has pulled at the heartstrings of social media users who have heaped nothing but praise onto the officers.

‘These are the kinds of police I have known in my 30 years of being married to one,’ one person wrote.

Another person commented: ‘Being in that line of work it’s disappointing that the good that is done is rarely acknowledged.’

One social media user said she was fighting hard to hold back the tears.

‘This is pure kindness and it just shows police aren’t always there to slap you with fines, they’re there to show compassion and respect too,’ she wrote. 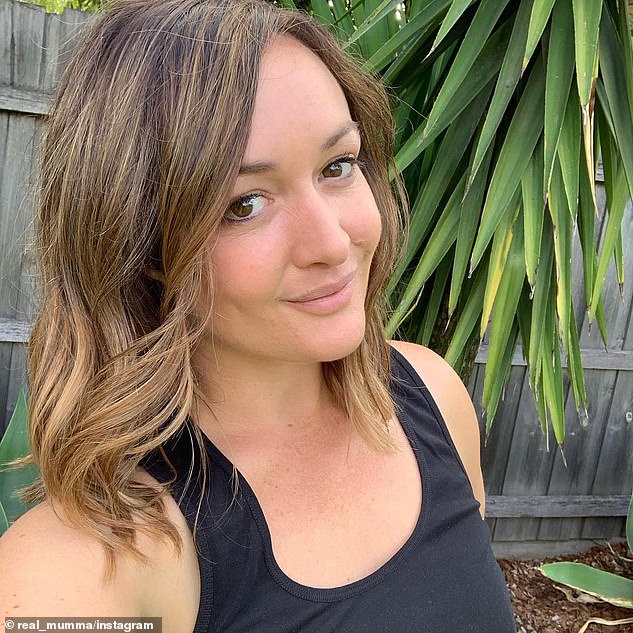