Up-and-coming Melbourne Storm hooker Harry Grant allegedly had to be taken to hospital by ambulance after being found passed out outside a stranger’s home after a weekend of partying.

Grant, 21, was reportedly found on the doorstep of a resident in Richmond on Monday morning – less than 48 hours after the Storm crashed out of the NRL finals series after a loss to the Sydney Roosters on Saturday night.

The shocked resident told 3AW’s Ross and John Rumour File segment that he was so concerned about the player, whom he did not name on air, that he called an ambulance for him.

Grant was allegedly treated for facial cuts in the hospital.

The Good Samaritan was reluctant to discuss further his early morning encounter with the young  player because he ‘felt sorry for him’.

Grant is understood to have being enjoying a few drinks with Storm teammates after they were bundled out of the NRL finals series by the Roosters.

The Storm’s preliminary final loss was only their sixth in 27 games this year.

Storm players were visibly gutted after the loss.

Melbourne Storm spokesman Paul Munnings said the club was aware that one of its NRL contracted players has been treated in hospital this morning for facial cuts and will undergo further medical tests today.

‘We can confirm there is no on-going investigation by Victoria Police into the matter,’ he said. ‘The player, who was not part of our preliminary final squad on Saturday night, is expected to be able to return home today.

‘He will continue to be supported by Storm medical and player well-being staff.’ 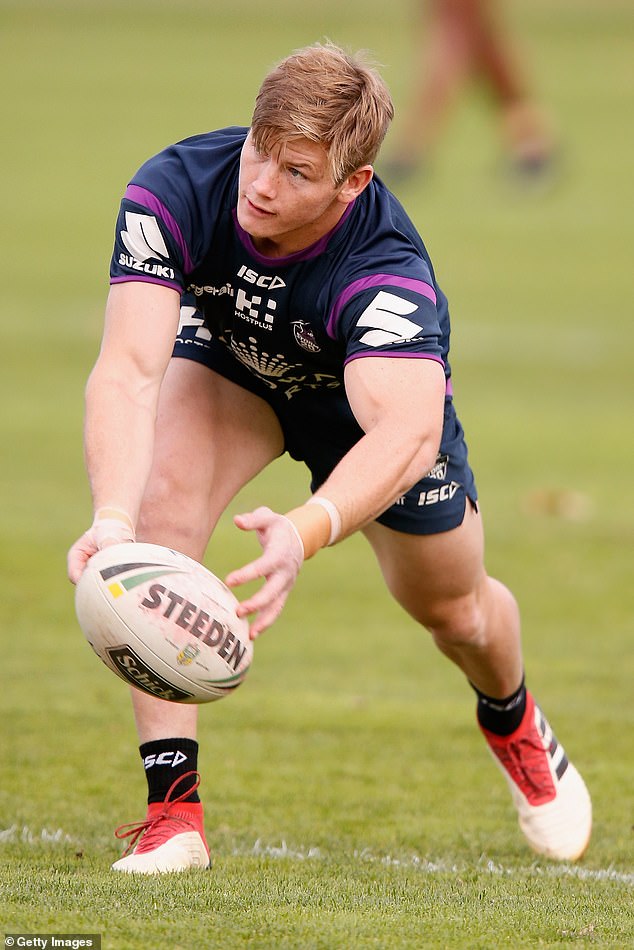 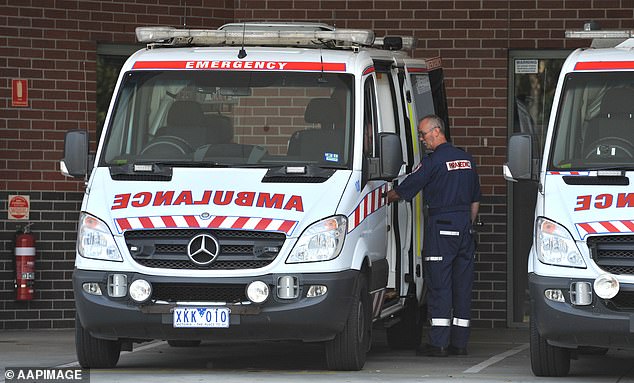 As he spoke, he looked around the subdued Storm dressing room and managed a few smiles as he saw the talent that he’d helped develop into quality first graders in 2019.

‘Guys like Jahrome Hughes, Brandon Smith, Harry Grant, Ryan Papenhuyzen, even Brodie Croft… have given me a different role not only during the games but during the week. It’s almost like I’ve been a bit of a coach to those fellas,’ he told an NRL scribe.

Grant has been earmarked as a potential replacement starting hooker for the skipper if he chooses to retire next season.

Smith remains uncommitted about playing on in 2020, although his post-game comments on Saturday night hinted at him returning. 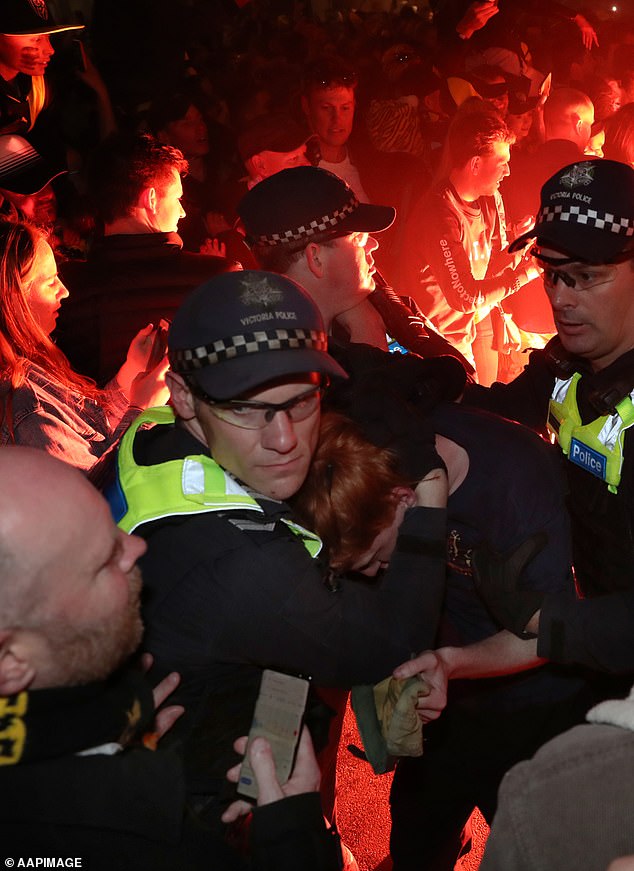 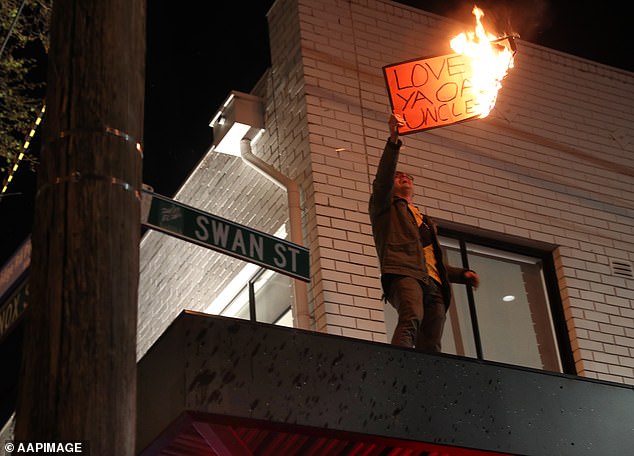 A man burns a sign in Swan Street, Richmond as Tigers fans celebrate their team’s victory in the 2019 AFL Grand Final in Melbourne

Grant represented Queensland as a schoolboy and at Under-18s and Under-20s level.

With a cheeky smile and school-boyish charms, he has become a popular addition to the Storm.

In an interview in June with the NRL, Grant spoke of his love for the Melbourne club.

‘I love everything about the club,’ he said. ‘I love it all. I love the culture, I love being around the boys – learning off some of the greats that we’ve got here at the club.’

It had been a big weekend in Melbourne, with Richmond fans flocking to the streets in its heartland just a stone’s throw from the MCG where they won the premiership cup.

While the Tigers Norm Smith-winning medallist Dustin Martin admitted to having a big night himself, he managed not to end up in the back of an ambulance.

On Sunday, Martin admitted he had little recollection of a wild night of celebrations following his second premiership in three seasons.

The bleary eyed dual Norm Smith Medallist was still wearing his jersey as he and his Tigers teammates celebrated with thousands of fans who flocked to Punt Road Oval on Sunday. 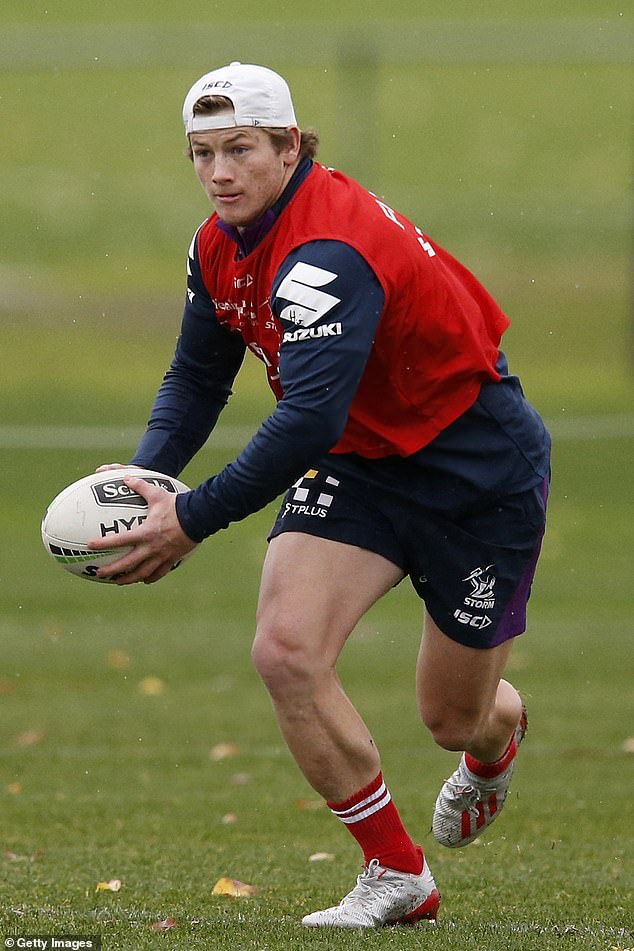 Giants players looked miserable as they fled Melbourne following their humiliating 114-25 defeat on the sport’s biggest stage on Saturday in their first AFL grand final.

Among the faces of dejection were Giants star Toby Greene, whose father Michael was arrested after he allegedly assaulted a female police officer while being escorted out of the MCG during the game for being too intoxicated.

The Swan Street thoroughfare, usually busy with trams and traffic, was closed at 4:30pm from Punt Road to Church Street.

But despite the ban on drinking on the street, many supporters were seen openly knocking back beers in the crowd.

Overall, police were happy with how people behaved in and about the MCG last weekend.

Three people were arrested for being drunk and another three were summonsed to appear at court for discharging flares.