A bored Melbourne woman stuck in the world’s longest lockdown has shared footage of a massive portrait she made of Victorian Premier Daniel Andrews using fairy bread.

Casey Gothard posted a video to TikTok on Tuesday of the artwork after she had finished the unique portrait made with 126 pieces of bread.

‘@Dan Andrews, I just want to get on the beers,’ Ms Gothard wrote.

The footage showed Ms Gothard spreading 100s and 1000s onto bread at her table filled with crusts from pieces of bread.

Ms Gothard then lip-synced a scene from the TV show Parks & Recreation, where a character named Ben had similarly found a new hobby of making claymation figures.

‘Depressed? I’m the furthest thing from depressed,’ Ms Gothard said as she held a piece of bread complete with 100s and 1000s to the camera.

‘I mean look at what I’ve accomplished,’ Ms Gothard added. 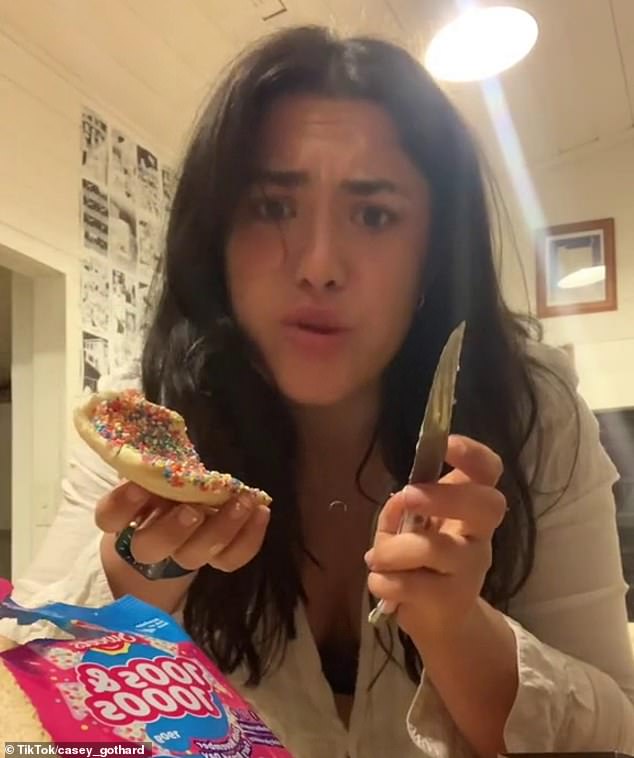 She then displayed the final product of the Premier made from fairy bread, which was laid out on tiled flooring and was accompanied by three pieces of bread that read ‘Dan’.

Every fine detail of Mr Andrews was captured in the eccentric and colourful artwork, including his glasses and his hairstyle.

‘It started quite systematic, but ended up with me covered in butter trying to fend off my dog at 1am on Monday morning,’ she said. 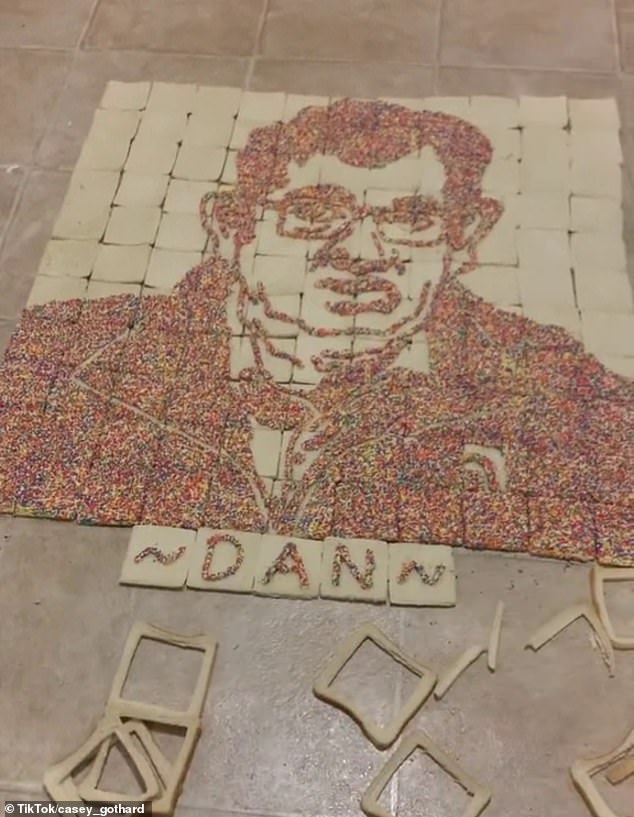 She then displayed the final product of the Premier made from fairy bread, which was laid out on tiled flooring and was accompanied by three pieces of bread that said ‘Dan’

She noted that boredom was one of the reasons she decided to create the fairy bread mural.

‘A few things inspired me to make the mural. Yes one was boredom – there are only so many bloody walks one person can go on before they go insane.’

However, the main reason behind the artwork was that Ms Gothard had been looking to mix her two passions of stand-up comedy and art, which has always strayed away from traditional styles.

‘I had been searching for a way to combine my comedy and art for a while, and when this idea popped into my head, it simply wouldn’t get out until I made it.’ 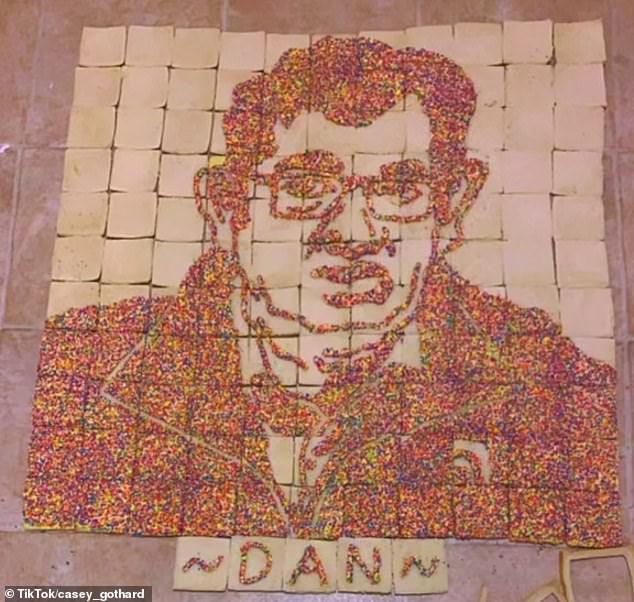 The artwork, which has now been named ‘Fairy Dan’, used 126 pieces of bread and took Ms Gothard ten hours to create

‘I have always admired and loved how Australians use humour to communicate, and how my generation uses memes and satire to consume economic and political information,’ she said.

‘I also love that, like Damien Hirst, this work will deteriorate just like many politicians have over this pandemic,’ she added.

Ms Gothard further noted that her comment was not about her political views, but about the nation’s current political climate, the humour behind it and how the country could identify a Premier made out of fairy bread.

Many individuals have been amazed by the video and have commended Ms Gothard on her impressive artwork.

One user wrote: ‘I literally choked on my drink.’

‘This is magnificent, worthy of the National Gallery of Victoria,’ wrote another.

While a third user said: ‘Think we can all agree that it’s a masterpiece.’