The Boardroom, one of Melbourne’s best-known brothels allowed a rare look inside, to show the ‘legitimate side’ of the regulated sex industry, amid a ballooning illegal massage parlour scene, and claims of ‘exploitation’ in the profession.

But despite the bad name many establishments have, its owner Milan Stemankovic told Daily Mail Australia he is desperate to prove that sex work can be done professionally – something some of his working girls confirmed. 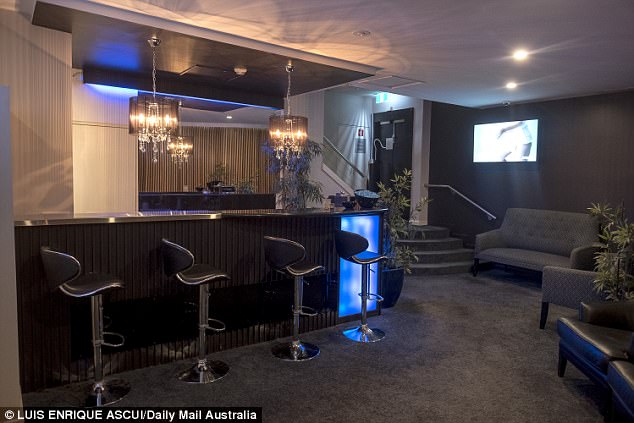 At a time when the sex industry is facing increasing threat from illegal brothels and claims of exploitation, The Boardroom’s owner claims it is continuing to do things by the book

‘The industry is still the same, but obviously we see changes from time to time and at the minute we’re seeing an increase in illegal brothels or massage parlours offering sexual services,’ Mr Stemankovic said.

‘It is almost becoming more acceptable. Working in a strip club is kind of cool these days – there’s still a stigma attached to this – but it’s become a bit more mainstream.

‘But obviously with those places that are popping up all over the place there’s not the same level of safety or health checks and it’s very hard to stop them moving around.’

And in a rare look behind The Boardroom’s closed doors, Daily Mail Australia not only saw inside but heard firsthand insight into the industry from a leading sex worker.

But that was five years ago, and when it comes to the sex industry, things come and go pretty quick.

Despite not feeling comfortable telling family, friends or anyone she has dated since first working at Melbourne’s finest adult establishment, Amy* has never looked back.

Her first shift was awkward – an Asian man shoved his tongue down her throat – but a $370 cheque for two hours work was almost what she earned a week in an office job.

‘I was sick of making $400 a week in a normal job and on my first shift I thought this is amazing,’ she told Daily Mail Australia. 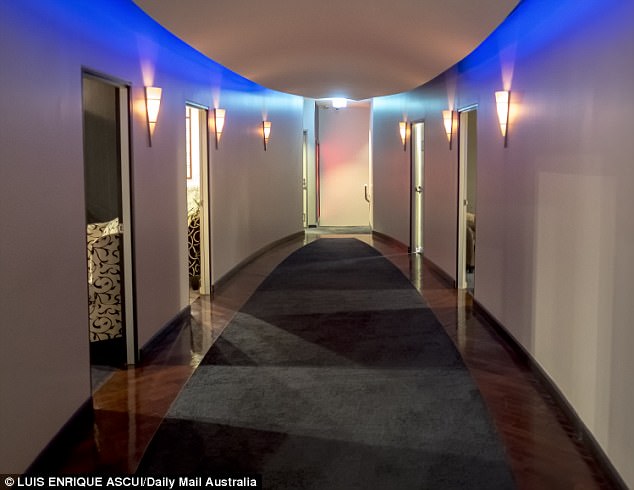 The Boardroom opened in 1997 in South Melbourne, only a few hundred metres from Crown Casino 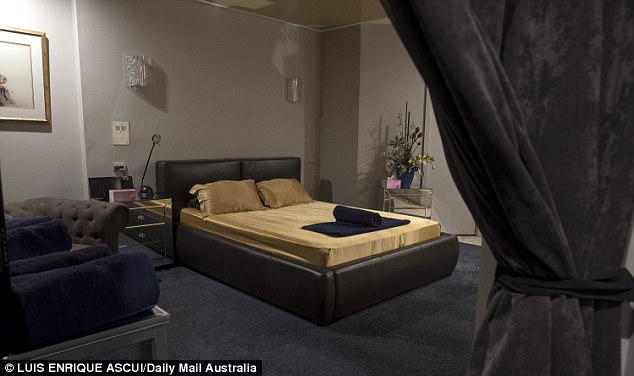 ‘I was sick of making $400 a week in a normal job and on my first shift I thought this is f***ing amazing,’ sex worker Amy told Daily Mail Australia

Located in the inner-city suburb of South Melbourne, just a few hundred metres from Crown Casino, ‘The Boardroom’ has been one of the city’s top brothels since 1997.

For patrons who haven’t pre-booked, a large bar and waiting area is the first point of call, before they are moved into private waiting rooms to meet all the available girls.

As the women file through one by one, the patrons have the chance to pick assess all the available options before choosing the one they like.

After the ‘intros’ are done, patrons are led upstairs by their chosen girl into one of six rooms of varying size and themes.

From large love heart-shaped beds, to spacious showers even spa baths, each of the rooms caters for any possible desire – and the patrons aren’t who you might think. 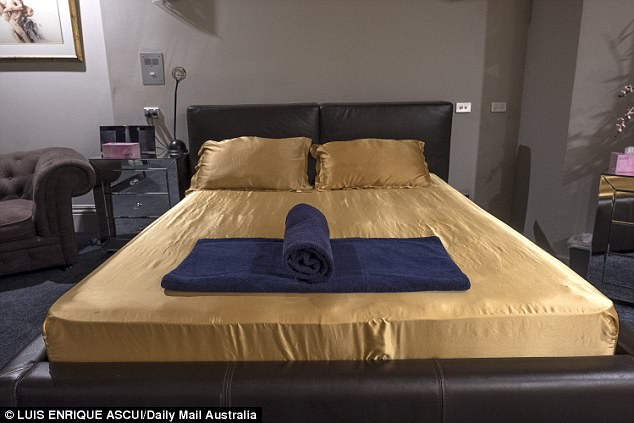 From large love heart-shaped beds, to spacious showers even spa baths, each of the rooms caters for any possible desire 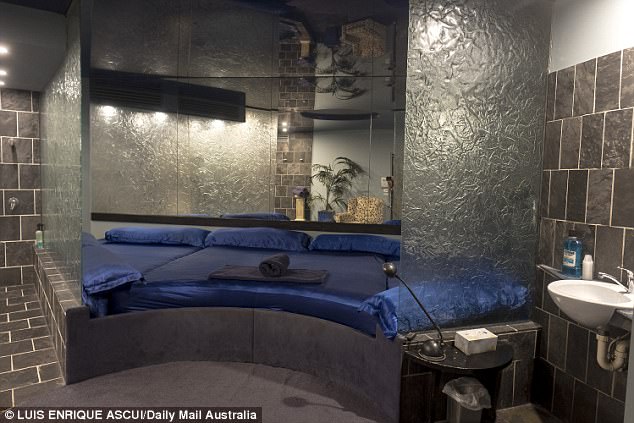 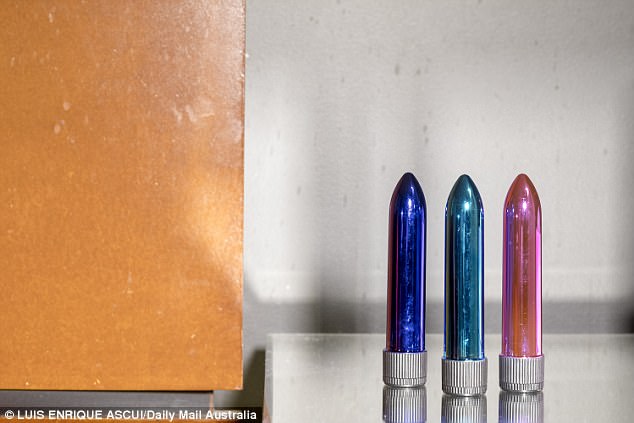 Before getting down to business there’s a check under a so-called ‘STD lamp’. If they don’t like what they see they can call for a second opinion from another girl 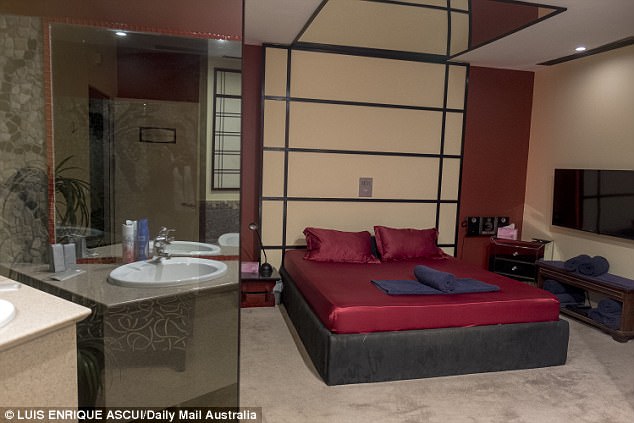 ‘We get girls very rarely, more couples, but if girls do come in they normally just want to watch their husband with another girl,’ Amy said

‘Two girls with one guy is quite common, sometimes it’s two guys and two girls, or a different variation depending on what guys are after, we cater for them all.’

‘During the day we get anyone from out-of-towners to men who come in while their wives are out shopping, and also businessmen and tradies.

‘We get girls very rarely, more couples, but if girls do come in they normally just want to watch their husband with another girl.’

But before getting down to business there’s a check under a so-called ‘STD lamp’. If they don’t like what they see they can call for a second opinion from another girl.

From there it’s up to whatever the girls feel comfortable with, something Amy found out on her very first shift.

‘On my first night I had this client and we went upstairs… and I remember him shoving his tongue in my mouth and I didn’t like it,’ she said.

‘Then I realised I didn’t have to do that if I didn’t like it, so I don’t do French kissing anymore.’

Despite the stigma attached to brothels, Amy insists that there are rarely any issues with clients, especially in high-end establishments like The Boardroom. 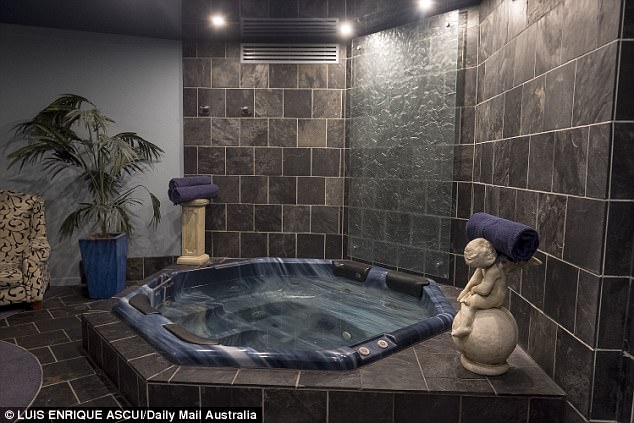 Despite the stigma attached to brothels, workers and management insist there are rarely any issues with clients, especially in high-end establishments like The Boardroom 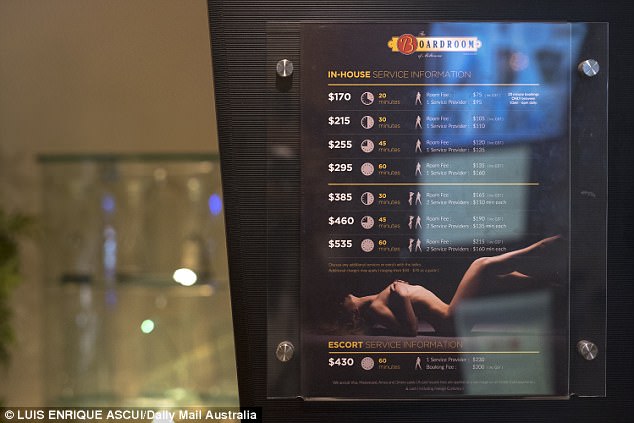 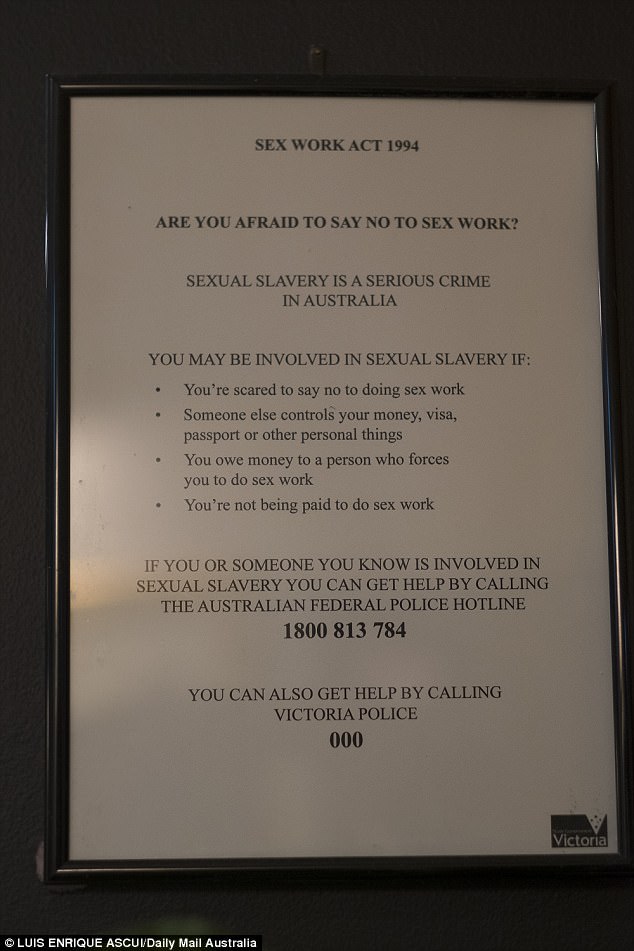 A copy of the Sex Work Act of Victoria is on display in every room. Amy stressed that the girls always had the right to say no if they didn’t want to do a requested act

She says friends at other brothels have warned her not to leave, but when the money is flowing in as readily as it does she wouldn’t dream about it.

‘It’s made my life amazing, because I’ve got all the time in the world,’ she said.

‘I can get up, got to yoga, start here at 10am, I don’t have to rush out the door and I can buy what I want when I want.

‘There was a lot of guilt when I did have a boyfriend, but I’ve been f***ed over by that many guys that I don’t think I’ll tell anyone until they’re willing to put a ring on it.’

But time and freedom isn’t the only bonus, with the money flowing into her account allowing her to live the high life by combining work with study and travel.

‘I’ve worked normal jobs as well this whole time – I don’t want to say what – and I’ve studied and travelled as well,’ she said.

‘The only downfall is you have to lie to people, but the money makes up for it.’

*Amy is a pseudonym chosen by the sex worker 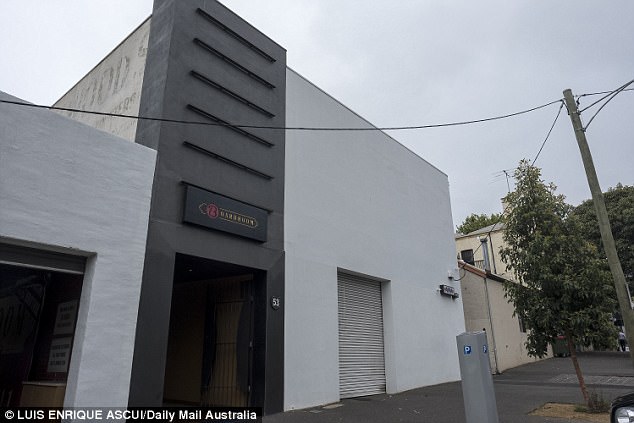 Amy said the money flowing into her account allowed her to live the high life, combine work with study and travel