Locals locked down in Melbourne’s public housing towers have compared their lives to the Hunger Games as they are spoken to over loud speakers and served out of date food.

The ‘hard lockdown’ announced by Victorian Premier Daniel Andrews on nine towers in North Melbourne, Flemington and Kensington began at 4pm on Saturday and was implemented in the wake of outbreaks within the buildings.

It will last for five days and see all residents will be tested for COVID-19. Any residents who refuse a test will be required to stay in their homes for 15 days.

So far 53 cases of COVID-19 have been discovered inside the towers.

After being caught by surprise when the lockdown was implemented, many of those in the buildings are now furious at a lack of food and information being supplied by authorities.

Flemington tower resident Najat Mussa (pictured) posted several videos from inside the public housing building to social media in the wake of the ‘hard lockdown’ being introduced. In one she compared the situation being experienced by residents to a scene of The Hunger Games 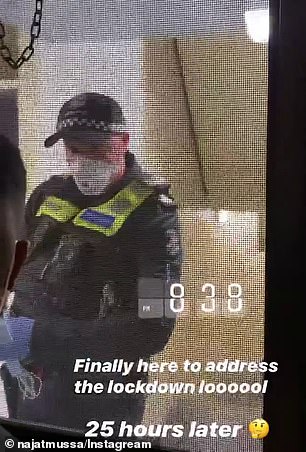 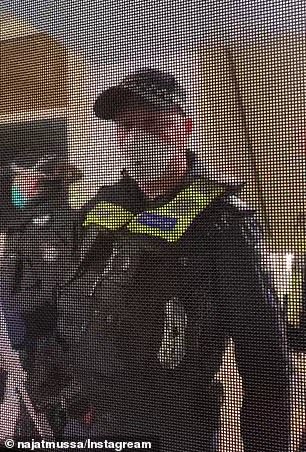 Police began to go door-to-door throughout the buildings on Sunday to provide residents with information about their situation. One man who spoke to police through a locked security door said he was not a resident, but rather had been visiting a friend when the lockdown came into force

Flemington tower resident Najat Mussa posted a video of a Victorian Department of Health official addressing the entire building over a loud speaker.

In it the woman can be heard telling residents: ‘We are here to assist you’.

‘We’re getting spoken to from a speaker like we’re on the Hunger Games,’ Ms Mussa wrote.

A common complaint among residents has been a lack of access to food and crucial supplies.

The sudden enforcing of the ‘hard lockdown’ meant those inside the towers did not have time to stock up on groceries, household items or essentials like baby formula.

One local man who tried to deliver food to a resident in need broke down in tears as he claimed Victorian Police had refused to pass the supplies onto his friend.

‘We’ve been talking to some of the residents in the Flemington flats and we’ve been organising food supplies for people, and things that they need,’

‘We just came back from dropping it off and there was a whole lot of police presence there and they were harassing people.

‘And on top of that, everything we bought for the resident in the building, and even though we told them specifically who it was for, they’ve started harassing him too.’ 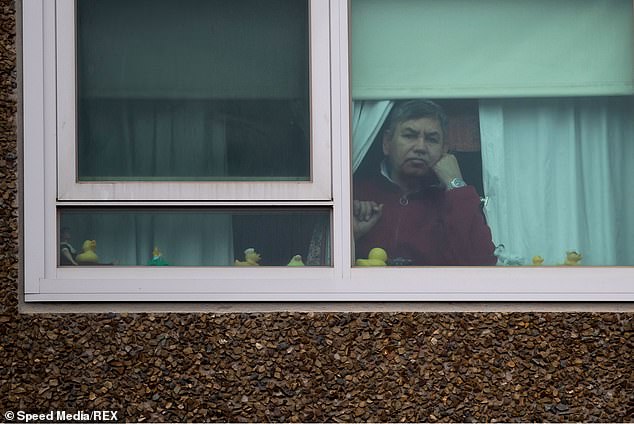 More than 3,000 residents of the nine towers across Flemington, Kensington and North Melbourne will be locked down for at least five days 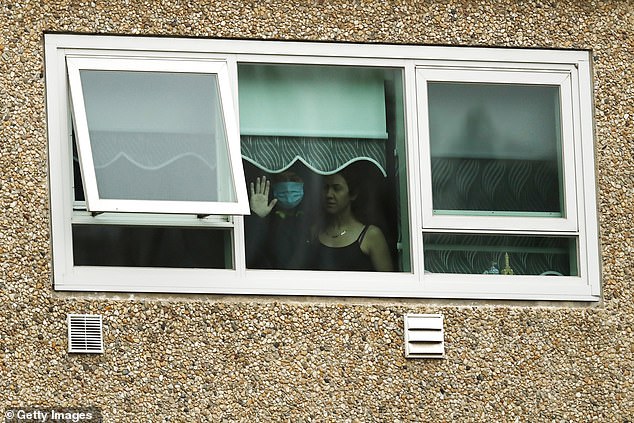 Every resident in the towers will be tested for COVID-19, or be required to stay isolated inside their homes for 15 days if they refuse 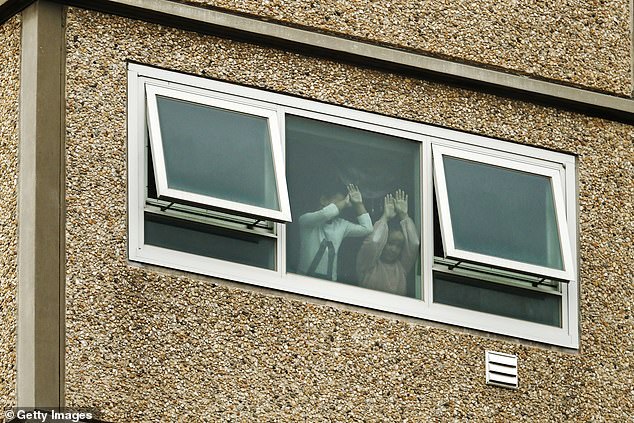 A total of 53 cases of COVID-19 have been discovered inside the nine towers, including 16 new cases announced on Monday 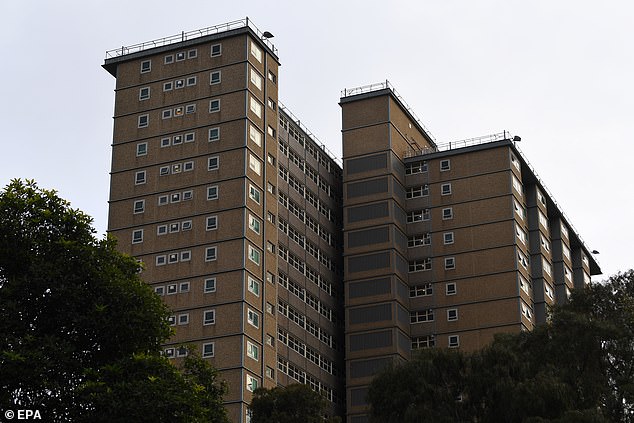 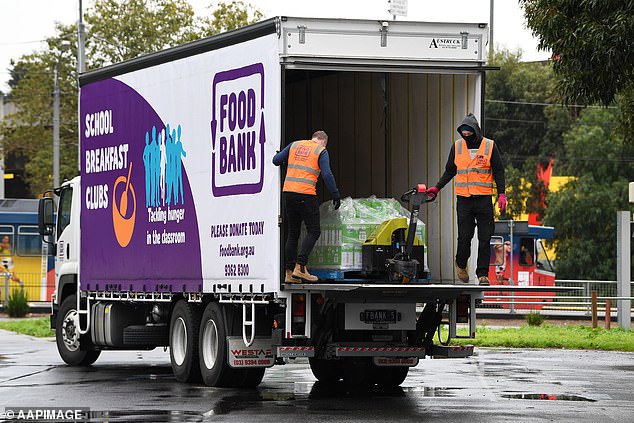 Police spent Sunday walking door-to-door throughout the nine towers to talk with all residents and explain the situation.

Incredibly, one man claimed he was not a resident of the tower but had been visiting a friend at the time the lockdown came into play.

Authorities had refused to let him leave the building and he had slept on the floor of his friend’s apartment, he claimed.

‘I don’t live her, I had to sleep on the floor. I came to visit yesterday and I couldn’t get out,’ the man told one officer through a locked security door.

The police officer then offered to make a phone call in a bid to help the man.

Tower resident Nur Ali did receive a supply package from officials, but complained it contained no essential items and several foods that had expired.

‘No essentials, no bananas, no milk. None of that kind of stuff,’ he told 7News.

‘Are you serious? This is what you’re feeding us? We’re human, come on.

Victoria’s Chief Health Officer Brett Sutton announced on Monday that 16 new cases of COVID-19 had been discovered, taking the total across the nine towers to 53.

In total 127 cases were discovered across Victoria on Sunday. 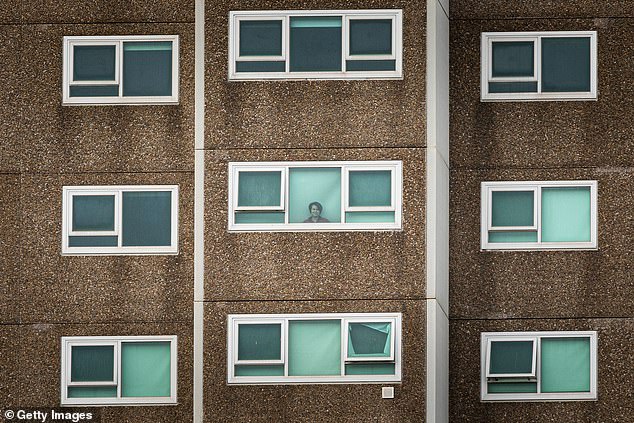 More than 3,000 residents in towers across Flemington, Kensington and North Melbourne will be couped up inside their homes for at least five days 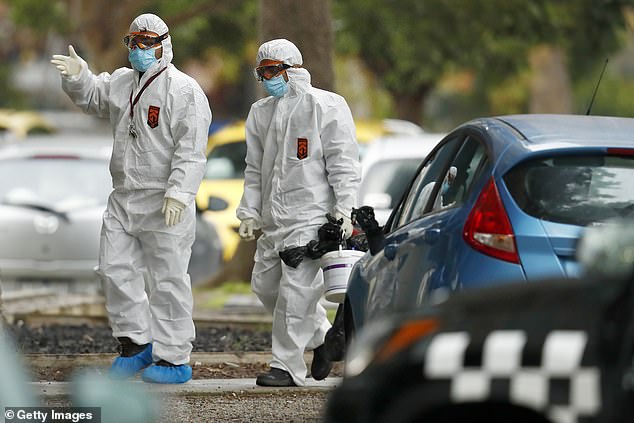 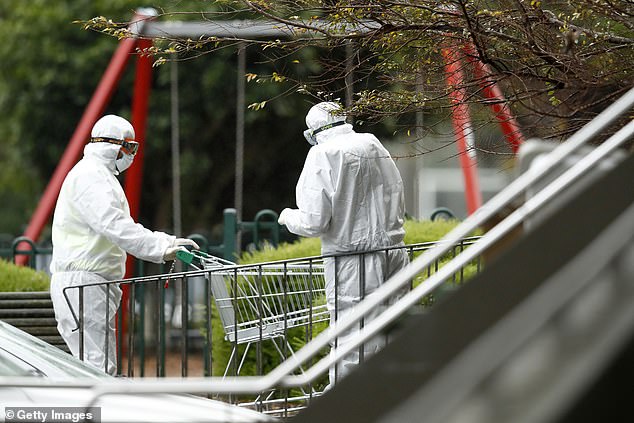 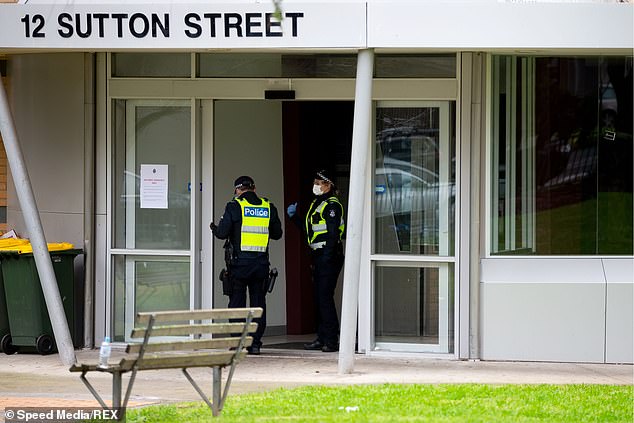 Police officers have been stationed on every floor and at every entrance, and exit, into all nine towers 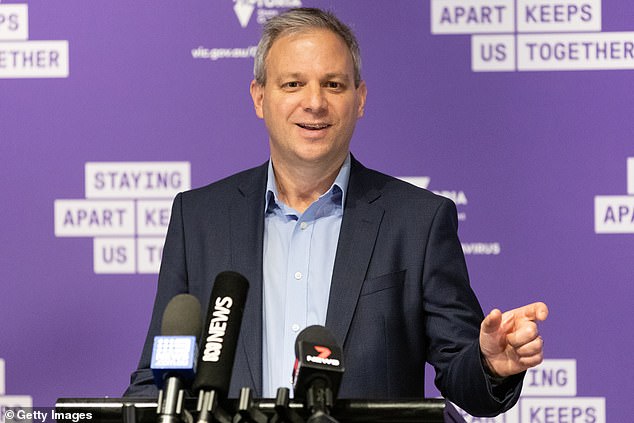 Within hours of being placed into lockdown a list of demands drawn up by residents of the towers was circulating on social media.

It included them being able to leave their homes for essential reasons, like others in locked down suburbs are able to do, and the removal of all police officers from the buildings.

Police officers have been stationed on every floor of every building.

Mr Andrews announced on Sunday that all residents of the towers would not have to pay rent for the next two weeks.

Anyone unable to go to work because they are locked in their home will receive a one-off $1,500 payment.

Unemployed residents will receive a $750 payment.

A letter distributed to residents of the towers and seen by Daily Mail Australia states that anyone living in the buildings who refuse a COVID-19 test will be detained for 15 days – instead of the standard five days. 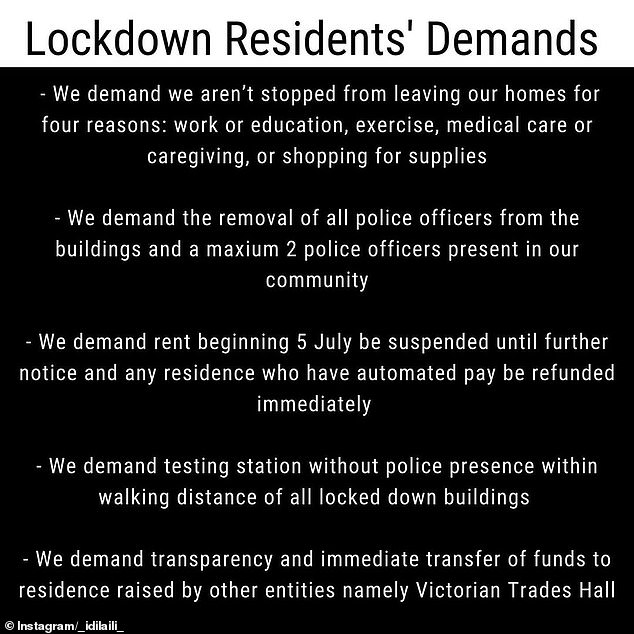 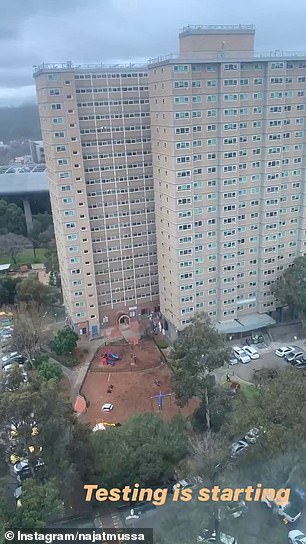 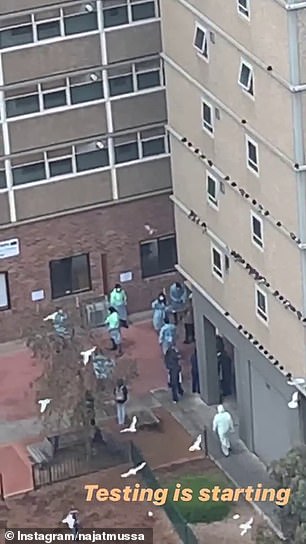 Footage shared by residents shows health officials dressed in protective gear beginning the testing process. Every resident of the nine public housing towers will be tested for COVID-19 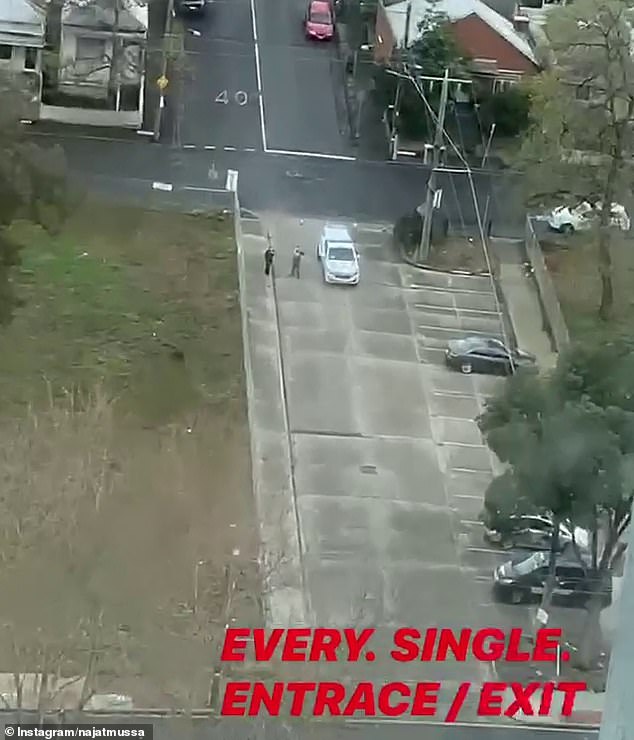 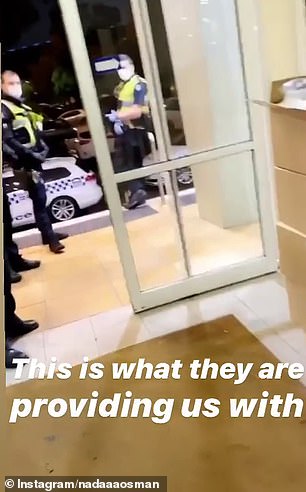 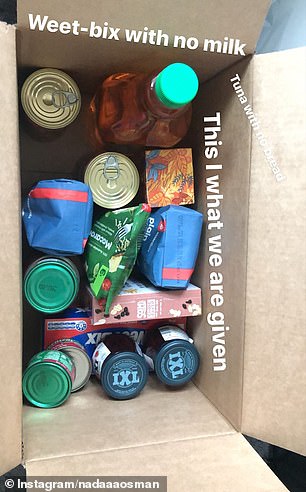 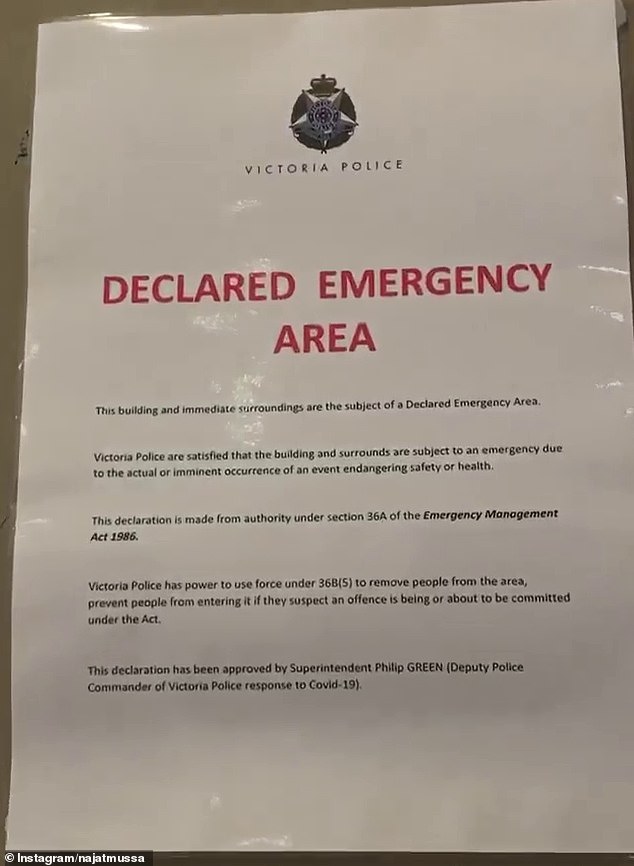 Despite being told not to leave their homes, residents used stairwells to move to all areas of the buildings.

As they walked up and down a stairwell, the group of young residents played a song by rapper Akon that features the lyrics: ‘I’m locked up, they won’t let me out.’

Signs have been placed throughout the towers declaring an ’emergency area’.

‘This building and immediate surroundings are the subject of a declared emergency area,’ the sign read.

‘Victoria Police are satisfied the building and surrounds are subject to an emergency due to the actual or imminent occurrence of an even endangering safety or health.’

CORONAVIRUS IN AUSTRALIA: THE LASTEST

* Victoria has recorded 127 new COVID-19 cases, 16 of those in public housing towers.

* The NSW and Victorian border will close from midnight on Tuesday, the first closure between the two states in 100 years.

* Residents of the inner Melbourne public housing estates put under a hard lockdown will have their rent waived and receive a hardship payment. A total of 27 cases have been detected in the nine towers which are home to 3000 people.

* Victorian Premier Daniel Andrews has defended the decision to lock down the North Melbourne and Flemington housing estates as necessary to protect residents as the state tries to quell its coronavirus resurgence.

* The Australian Medical Association has called for a temporary pause in the easing of COVID-19 restrictions across the country until Victoria gets its outbreak under control.

* NSW has recorded 14 new coronavirus cases, but all were returned travellers from overseas who are now in hotel quarantine.

* A Queensland nightclub operator could cop a hefty fine after video emerged of a packed dance floor with next to no social distancing.

* Victoria’s coronavirus crisis, the lack of a solid lead from the US, and a Reserve Bank meeting on Tuesday are likely to contribute to a weaker start for Australian shares.

* Collingwood and the Western Bulldogs have begun the exodus of clubs out of Victoria amid the state’s COVID-19 spike. All 10 Victorian teams will play interstate in round six, with the league establishing hubs in Queensland, Western Australia and the NSW.

* American Frances Tiafoe has become the latest prominent tennis player to test positive for coronavirus. World No.1 Novak Djokovic and several others tested positive earlier this month after playing in an exhibition event in Europe.

* July 10 – Queensland to reopen borders to all visitors except Victorians, who must undergo mandatory hotel quarantine for two weeks at their own expense.