Conwoman Melissa Caddick, who is suspected of committing suicide while being investigated for ripping off dozens of investors, will likely have left her family homeless.

The 49-year-old counted her parents, husband and brother as her closest confidants, but now their luxury properties are likely to be seized by authorities.

After Caddick mysteriously disappeared from her Dover Height’s home in Sydney’s east in November, a group of 13 investors demanded receivers sell her mortgaged properties.

She is suspected of ripping off about 50 others.

The $6.2million property where she, husband Anthony Koletti and her son lived and the $2.55million Edgecliff home of her elderly parents are among Caddick’s main assets that could be sold to repay swindled investors.

In chasing their money, some investors conceded her abandoned family were just as much ‘victims’ of her scamming as they were. 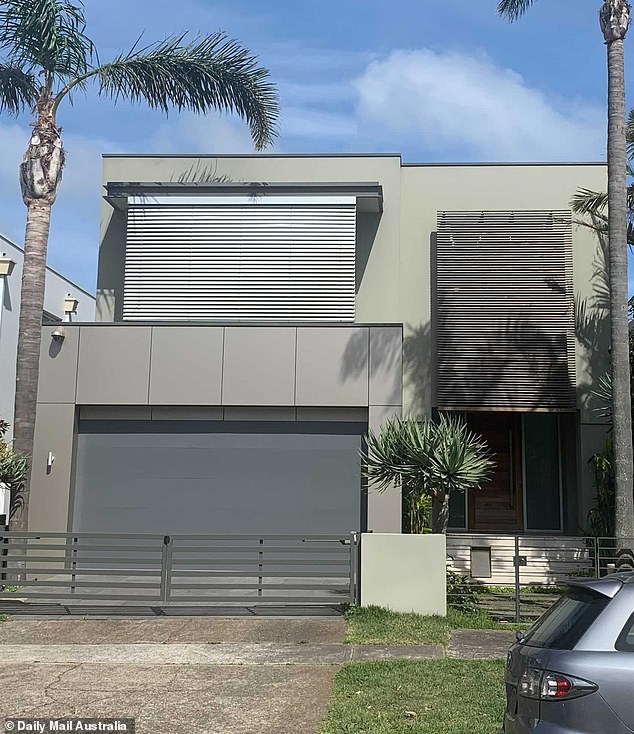 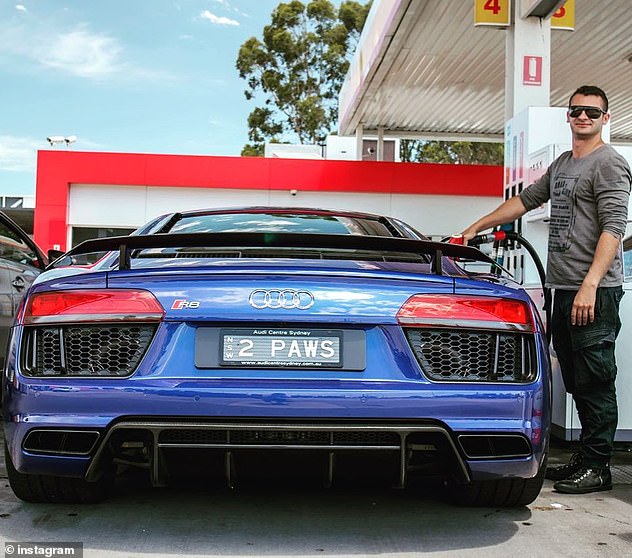 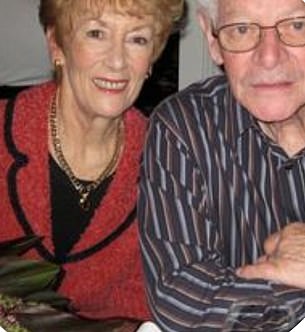 Caddick is understood to have swindled $25million from investors to whom she flaunted her extravagant lifestyle and convinced she could deliver massive returns.

Caddick’s parents Ted and Barbara Grimley moved into their luxury Edgecliff penthouse in Sydney’s eastern suburbs to be closer to Caddick – a move which will now likely see their house sold from under them.

‘They had explicit trust in her,’ said a source who invested in Caddick’s company and was acquainted with her family.

‘And I think they’re realising that they’re as much victims to that trust as well.’

The investor noted Mr and Mrs Grimley faced possible eviction from their home to pay down Melissa’s debts.

‘Where are they going to go? They’re 80 plus years old. They’re not in good health.’

The investor noted Caddick’s brother, Adam Grimley, had been left to clean up his sister’s mess – both emotionally and financially. 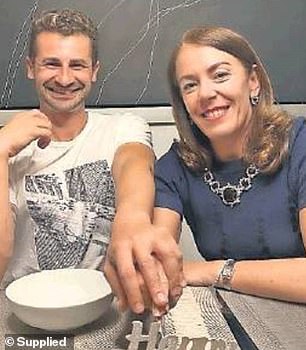 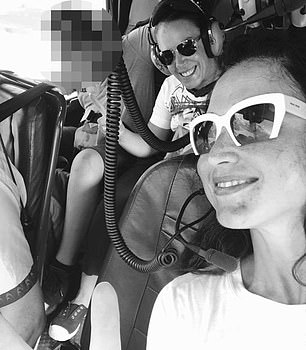 Ms Caddick, wearing a $250,000 Stefano Canturi necklace, with her husband Mr Koletti on her birthday this year. He is not suggested to have played any role in her disappearance. On right, Ms Caddick is seen during a helicopter ride 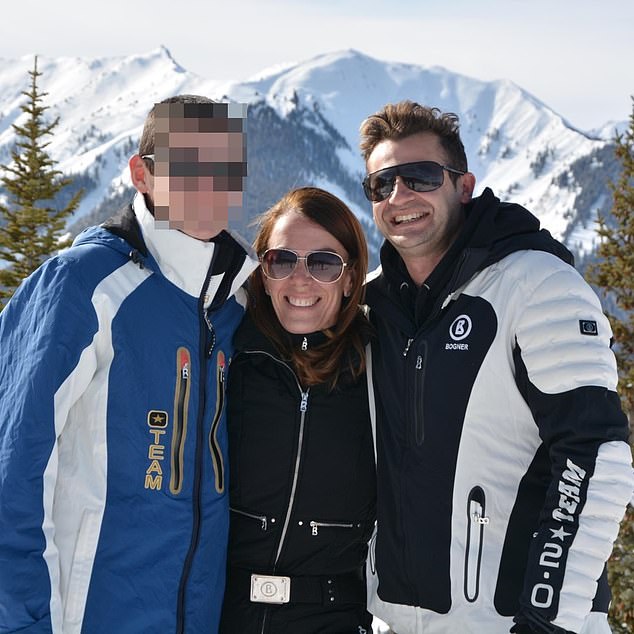 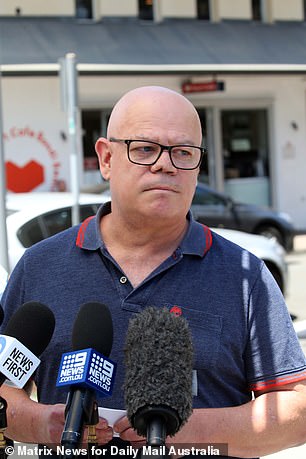 Caddick’s brother, Adam Grimley, has been left to clean up the mess, as manager of her estate

He himself had only recently moved back to Australia from Singapore, where he worked as a governance consultant.

He was unable to travel back to South East Asia because of Covid travel bans – leaving his own financial situation in question – only to have the burden of a missing, and now deceased little sister, and her financial burdens placed on his shoulders.

By mid-December, a month after Caddick’s disappearance he had already been hit with $55,000 in legal costs wading through her financial mess.

As part of his legal battles he successfully wrote to the Federal Court to convince them to increase his deserted brother-in-law and nephew’s living allowance from $800 to $1700.

But Mr Koletti and her son will now also likely have their $6million Dover Heights property seized and sold by liquidators to retrieve at least part of the cash she stole.

The 38-year-old, and Caddick, 49, had been married for seven years. She fell for him while he was doing her hair close to a decade ago.

‘It was about the way he massaged her head,’ a source familiar with the family claimed.

Mr Koletti has a number of roles: he is a super-car enthusiast, DJ, Joh Bailey hairdresser, ‘prawn farmer’, step-dad, and dog lover.

And since November two more he would not wish for – deserted husband and now mourning spouse.

He is not suggested to have any involvement in his wife’s disappearance or have any knowledge of her company’s alleged financial misappropriation of investor funds.

However, there is little doubt he benefited from his wife’s apparent wealth. He drove a $300,000 Audi R8 and they holidayed as a family each year in Aspen, Colorado.

Mr Koletti has been a DJ – producing a music video in 2015 – and a stay-at-home husband for the past year.

He put down his scissors at a Bondi Junction salon when the pandemic hit last March.

Caddick’s disappearance left him broke. In the weeks after his wife vanished, Mr Koletti told the Federal Court he had just $1.95 left in his only transaction account.

He’s living off a court ordered allowance of $1700, increased thanks to Mr Grimley, per week which is paid from Caddick’s frozen assets. 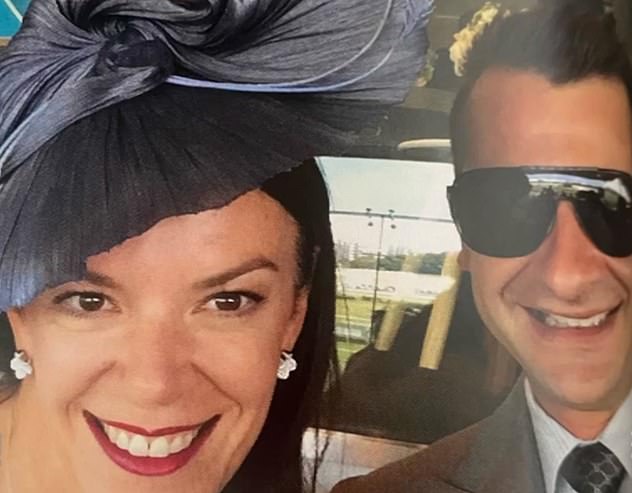 Off to the races: The once happy couple attending an event together

They have said it is likely Caddick took her own life after her home was raided by the Australian Securities and Investments Commission on November 11, 2020. Pictured: Map shows the distance between where Caddick’s foot was found,where she was last seen and Friday night’s latest discovery

His wife’s disappearance had led Mr Koletti to have several conversations with police about his missing wife.

Last November, he publicly called for the ‘communities of Australia’ to come together, find Melissa and bring her home but has kept his counsel since.

There has been some intrigue over why it took 30 hours for Mr Koletti to report his wife’s disappearance to police.

But Detective Inspector Gretchen Atkins told 60 Minutes that Mr Koletti was ‘doing what he can to assist us when we ask for help.

‘I think he’s struggled to be what you would expect … to be proactive,’ the police officer added.

Koletti had been spending a considerable amount of time at Ted and Barbara’s Edgecliff home leading up to her disappearance – rather than the $6.2million mansion where he lives – sources said.

Some sources have said after her disappearance he turned to them rather than his own parents for support.

Mr Koletti’s own family claim they only met Caddick a handful of times, his father previously slamming him as ‘delusional’ about her activities.

‘If Anthony is guilty of anything, it is for being in love with his wife, wanting her safely back at home, and being delusional about the truth of what she may have done,’ tax agent dad Rodo Koletti said.

The financial investigation into Caddick’s pyramid scheme has uncovered she spent the millions she stole.

Scouring thousands of pages of documents on her computers, investigators learned Caddick spent most, if not all, of the $25million she is suspected of fleecing from 60 investors – who all fell for her sales pitch that she would make them huge returns. 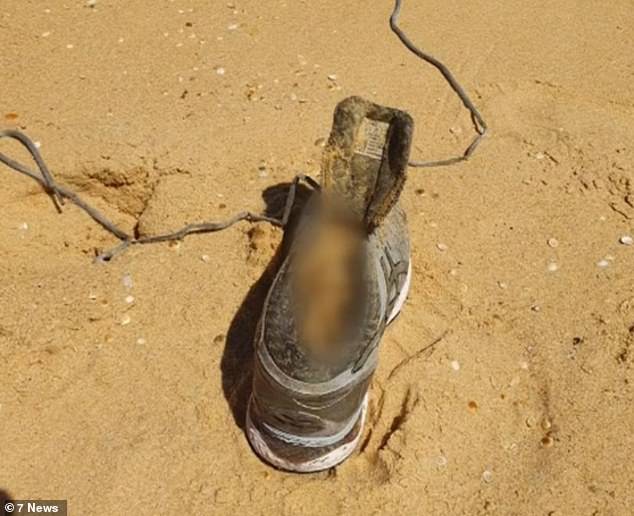 Her fashion budget also included more than $14,000 on Valentino items and nearly $40,000 she used for online shopping on designer label site Net-A-Porter.

The documents show she also withdrew $108,586 which was then funneled into her own accounts to use on bookings with travel agents Flight Centre.

More than $55,600 was withdrawn with the note ‘Qantas’ which investigators believe was used on personal flights.

A grim breakthrough in Caddick’s case came earlier this week when teenage campers found the remains of her foot inside an ASICS runner on a New South Wales south coast beach.

A second crime scene has now been set up 150km away from where the foot t was found after police were called to Mollymook Beach about 9.30pm on Friday night when walkers found more human remains.

The group came across a large piece of stomach flesh which included a belly button.

DNA testing will be carried out to see if the new remains belong to the conwoman.