Lewis Hamilton came under fire this week when he shared a video of his young nephew on social media telling him that ‘boys don’t wear princess dresses’.

And it seems that his comments have backfired further as a photo has emerged of the F1 driver dressed almost identically to Princess Diana.

The image sees Hamilton, 32, dressed in a tartan blazer, a black roll neck sweater and even a string of pearls as he attended the British Fashion Awards last month.

His choice in outfit is almost identical to one worn by the late Diana Spencer to a Christmas light switch on in 1993, also seen in a tartan blazer and black roll-neck. 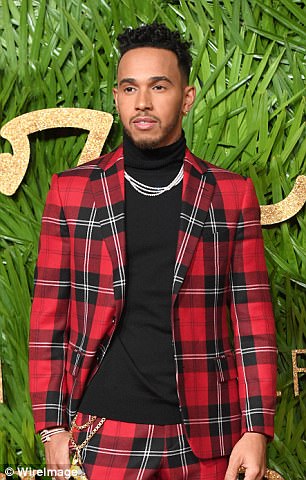 The comparison was made by Twitter user Matt who shared the snap on his account on Wednesday.

Pointing out the irony Matt captioned his photo, ‘boys don’t dress as princesses’  and the tweet has since amassed more than 46,000 likes and 15,000 rewteets.

The tweet comes after the racer, who has a strong presence on social media, ruffled the feathers of fans across the world after he shared a video where he told his young nephew that ‘boys don’t wear princess dresses’.

Using the embarrassed monkey emoji, Lewis Hamilton said on his Instagram video that he was ‘so sad’ to see his nephew wearing a princess dress

Lewis’ nephew opted to don a pink and purple princess dress for Christmas day on Monday, and looked chuffed with his costume while waving around a pink wand.

To make matters worse, he used the embarrassed monkey emoji as the caption for his video, in which he said ‘I’m so sad right now, look at my nephew’.

He then asked the youngster: ‘Why are you wearing a princess dress? Is this what you got for Christmas?

‘Why did you ask for a princess dress for Christmas?’

The 32-year-old was celebrating the festive period abroad and ended his video by controversially shouting: ‘Boys don’t wear princess dresses!’ – causing the little boy to cover his ears and turn away.

As he jokingly yells, asking why he asked for the pink and purple dress for Christmas, the little one covers his ears and turns away

The video created a vast amount of upset – especially among the transgender community, prompting Lewis to apologise.

Again, taking to his Instagram the F1 star wrote: ‘Yesterday I was playing around with my nephew and realised that my words were inappropriate so I removed the post. I meant no harm and did not mean to offend anyone at all.

‘I love that my nephew feels free to express himself the way we all should.’

In a second post he added: ‘My deepest apologies for my behavior as I realise it is really not acceptable in the world today for anyone, no matter where you are from, to marginalise or stereotype anyone.

‘I have always been in support of anyone living their life exactly how they wish and I hope I can be forgiven for this lapse in judgement.’ 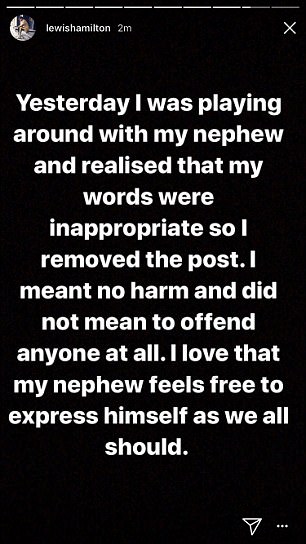 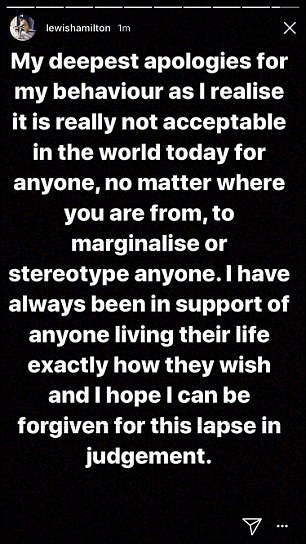 After realising that his comments had offended so many people, he released an apology on his Instagram account

The official Pride in London Twitter account responded to the video saying: ‘Disappointed with this video of Lewis Hamilton

The artist wrote: ‘I hope @LewisHamilton properly thinks and apologises to his nephew for that video.

‘Thinks about why it is so horrible, and considers donating to a charity which supports LGBT youth. That video is a video so many of us have experienced. Gross. It sticks with you.’