Time to give your Memoji a makeover? Apple launches new customisations for its personalised emoji — including outfits, eye colours and hats

Apple is launching new customisations for its Memoji avatars — including additional outfits, hats and independent eye colours for its personalised emoji.

The extra selections are due to make their official debut with the release of iOS 15 in the Autumn of this year, but can be seen now in the system’s public beta preview.

Other additions in the operating system update include new glasses, multi-coloured headgear and accessibility options like cochlear implants and oxygen tubes.

The iOS 15 Memoji bundle will include more than 40 new outfits — including a leather biker jacket, an Arabian thawb and a cheongsam from China — that users can select to reflect their style, mood or even the current season.

The outfits are customisable with up to three different colours — and can be shown off to best effect using new Memoji stickers with expressive upper body motion.

Among the nine new stickers are a ‘light bulb moment’, a hand wave and the shaka — or ‘hang loose’ sign which originated in Hawaiian culture.

Multicolour options are also coming to headwear, allowing users more choices and the ability to, for example, reflect their favourite sports team or university.

Additions in the eyewear department include three new frames — heart, star, a retro-shaped options — with users able to select the colour of both frames and lenses. 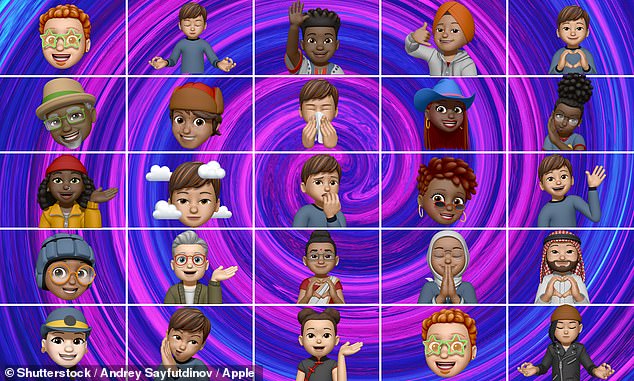 The extra Memoji characterisation options are due to make their official debut with the release of iOS 15 in the Autumn of this year, but can be seen now in the system’s public beta preview

Apple offered consumers a first look at iOS 15 during the tech giant’s Worldwide Developers Conference (WWDC) back in early June this year.

The upgraded operating system will notable roll out a number of new improvements to FaceTime — including 3D audio, a grid view for video conferences intended to help compete with Zoom and a portrait mode that blurs the user’s background.

Other changes will include the SharePlay feature that lets users listen to music or watch videos with friends, performance boosts for Apple AirPods and a redesigned interface for iMessage.

HOW TO CREATE A MEMOJI IN IOS 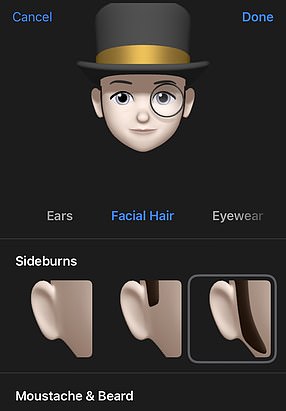 Open Messages on your iPhone.

Launch a recent chat and then tap on the Memoji stickers button, which is illustrated with three smiling faces.

Tap the + symbol inside the panel that loads to create a Memoji.

Apple lets you customise the shape of the face, skin tone, glasses, and more.

When you’re happy with the creation, hit the Done button in the top right-hand corner to save your character.

Select the Memoji you’ve created from the roster of faces and then speak as normal to animate their facial features.