Mercedes will take Formula One performance from TV screens to the driveway in 2019 with the arrival of the brain-frazzling Project ONE hypercar – a new road-going model based on Lewis Hamilton’s F1 machine that can take you from the traffic lights to 124mph in less than six seconds.

The three-time Formula One world champion was on-hand to deliver the phenomenal vehicle to the world’s media on Monday evening during Mercedes-Benz’s pre-Frankfurt Motor Show event.

The jaw-dropping car will use a 1.6-litre turbocharged hybrid V6 engine like the one powering Mercedes-AMG’s F1 factory team’s cars, producing more than 986bhp, but in reality it won’t be coming to a driveway near you, as it will cost a staggering £2.4 million.

And you can forget about saving up for one – all 275 due to be built have already been pre-sold, Mercedes said.

F1 for the road: This is Mercedes-AMG’s Project ONE hypercar that’s due to go into production in 2019 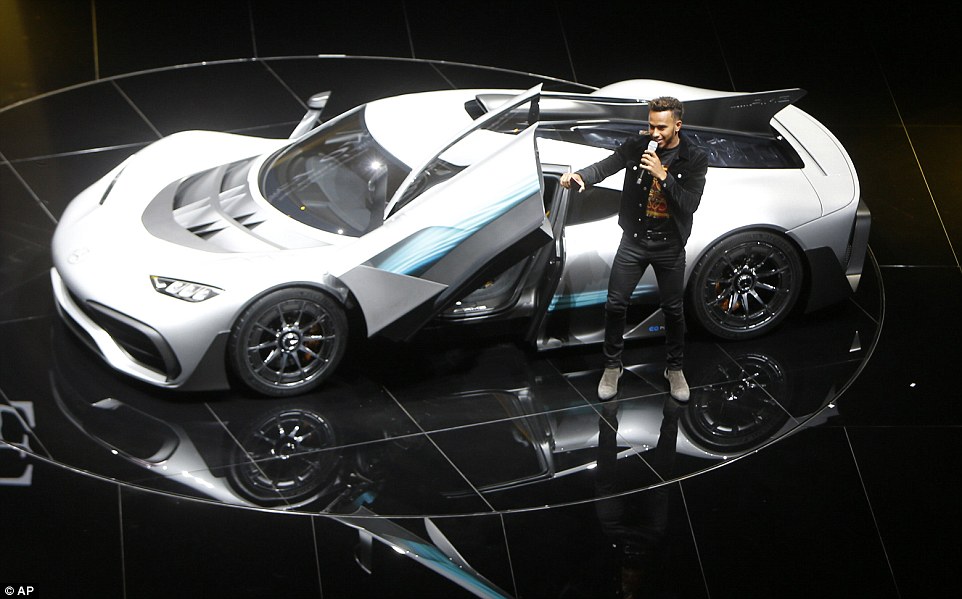 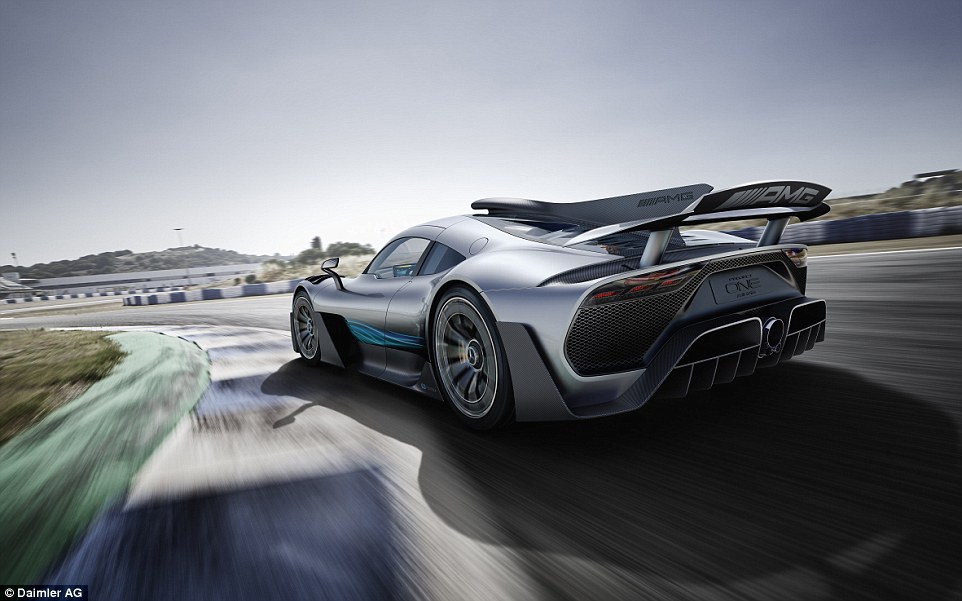 Just 275 examples will be made with a staggering price tag of £2.4million. Mercedes says all £660,000,000-worth has already been promised to buyers

While Ferrari already has the LaFerrari, McLaren sells the P1 and Red Bull is working in collaboration with Aston Martin to produce the Valkyrie, the Project ONE is set to be the closest thing you can own to what lines up on the F1 grid on Sunday afternoons.

That’s because Mercedes has used Hamilton’s racer as a donor, ripping the hybrid V6 powerplant straight out of the back of his W07 machine and shoehorning it into a two-seat road car that will be adorned with registration plates in two years’ time.

No less that four electric motors combine with the 1.6-litre six-cylinder petrol engine to produce around 1,000bhp – and that’s with the redline trimmed from a wailing 15,000rpm in F1 specification to a slightly less eardrum-shattering 11,000rpm for the Project ONE.

The lithium-ion batteries and the system used to cool them have also been lifted directly from the Mercedes Formula One race cars, though the Project ONE has more of them to boost the zero-emissions driving range and a plug-in socket so you can replenish electricity from the mains. 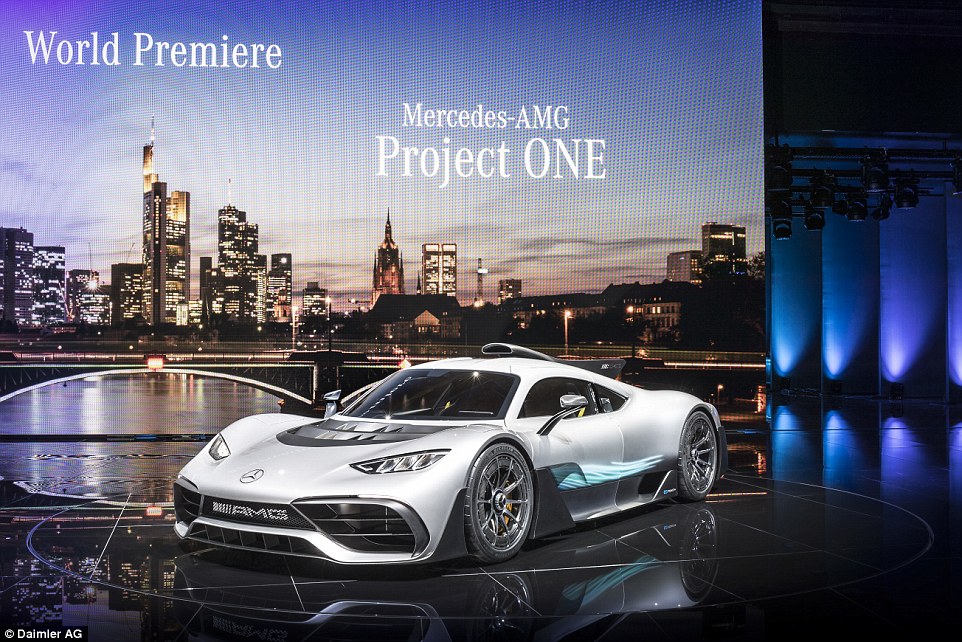 The Mercedes-AMG Project ONE is the closest thing to an F1 car on the road – more so than rivals from Aston Martin (and Red Bull), Ferrari and McLaren 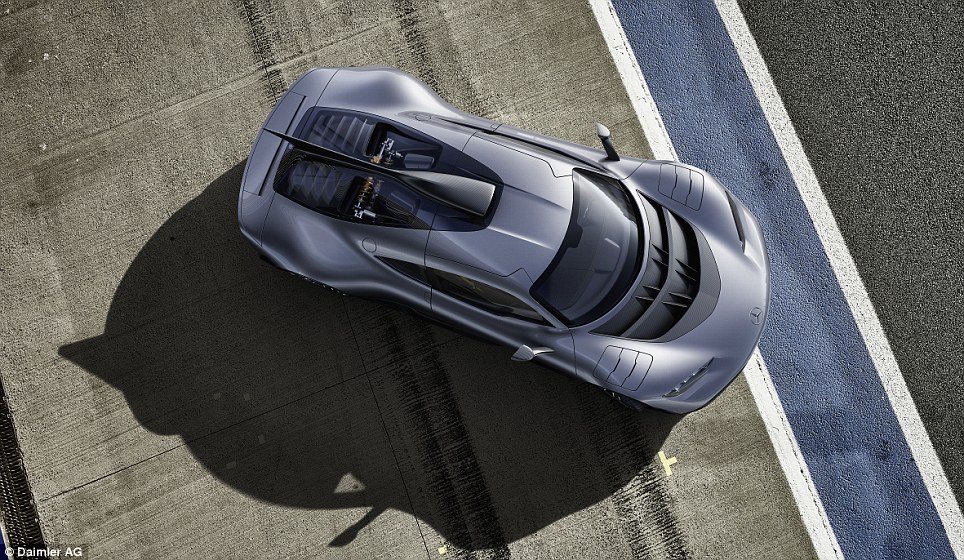 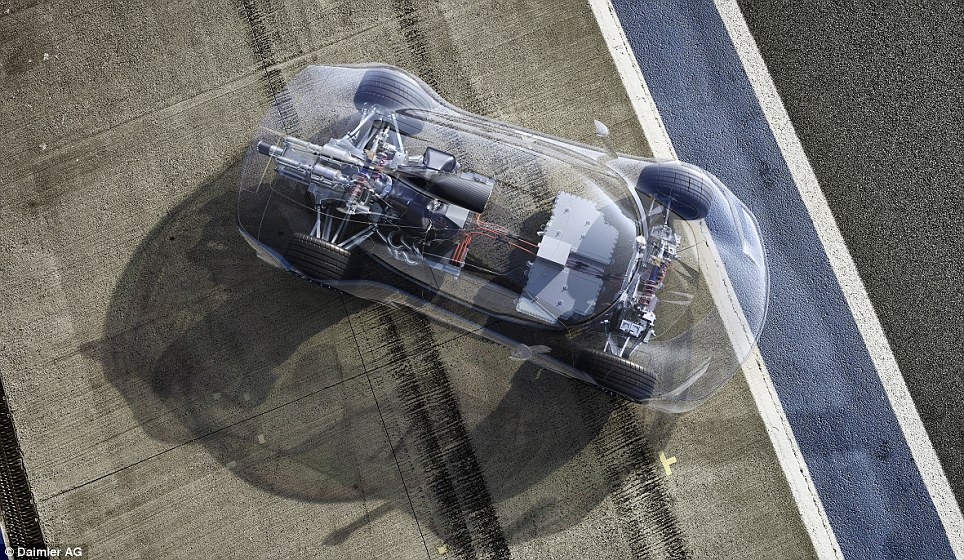 Mercedes has shoehorned the hybrid powerplant from the F1 car into the Project ONE. The redline has been trimmed from 15,000rpm in Formula One spec to 11,000rpm for this road-going vehicle 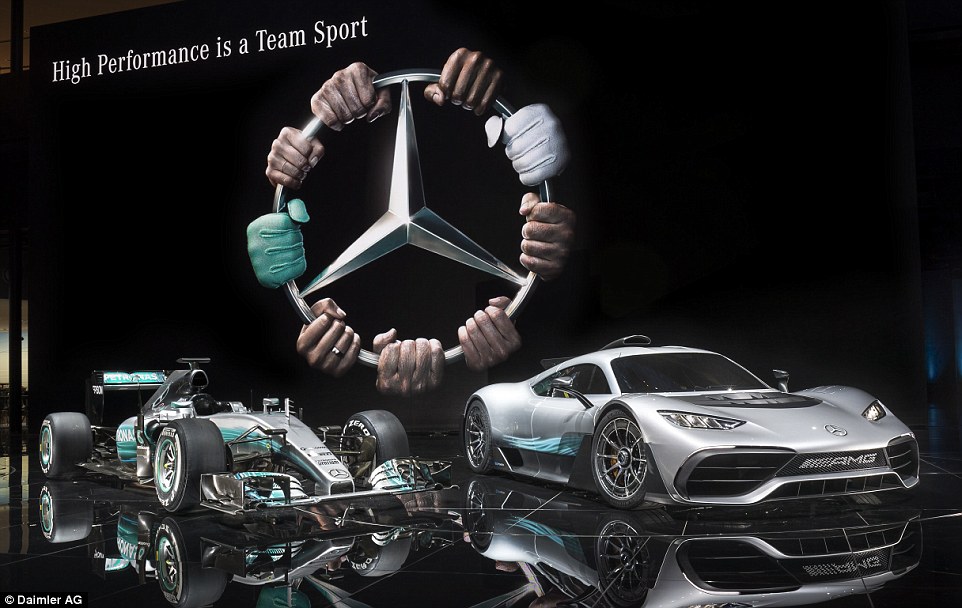 With the batteries fully charged, the car will be able to cover 15 miles in electric-only mode – enough for almost five laps of the Silverstone circuit or a quick blast to the local shops and back.

While Mercedes promises this will be a road-legal vehicle, the vast majority of owners are likely to limit the licence-losing performance – including a 217mph top speed – to use on track only. 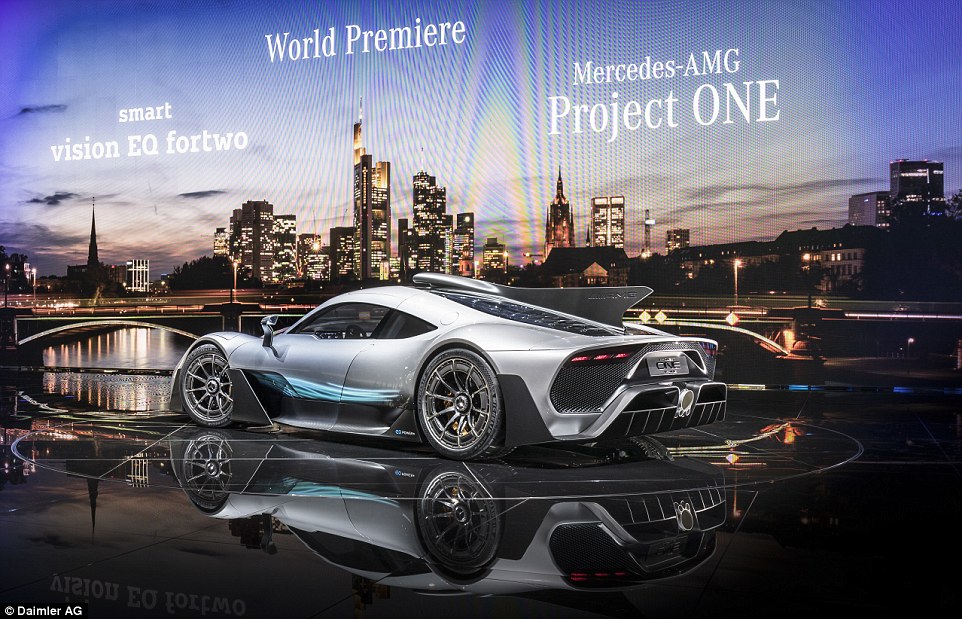 As well as an F1 power unit, the Project ONE also uses aerodynamic features learned on the track, including the enormous rear diffuser and shark fin over the engine bay 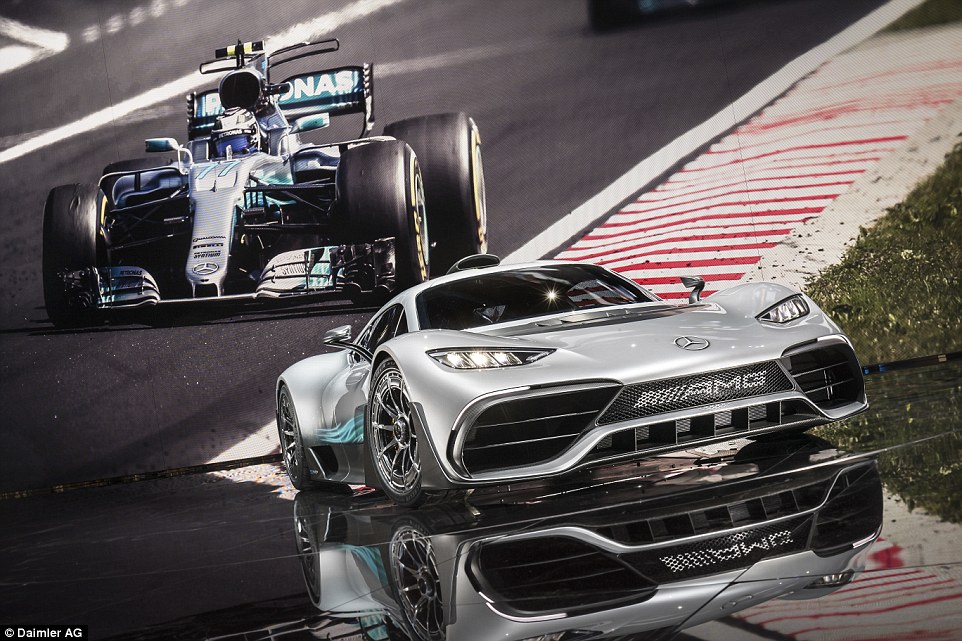 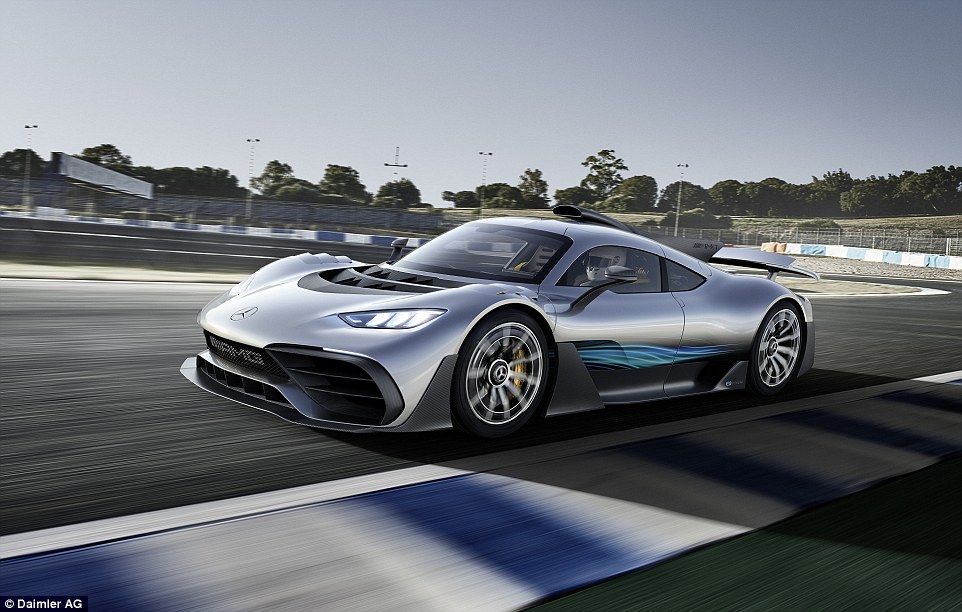 Mercedes said drivers will be able to switch between a range of driving modes, including a ‘highly dynamic’ setting that’s similar to the setting used by Hamilton and team-mate Valtteri Bottas when they want to set a blistering qualifying lap time.

Other settings will modulate how much power is being fed to the wheels, just so owners can drive it on the road without fear of pirouetting at every roundabout. 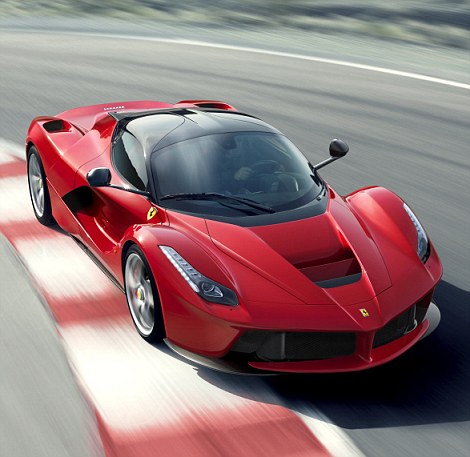 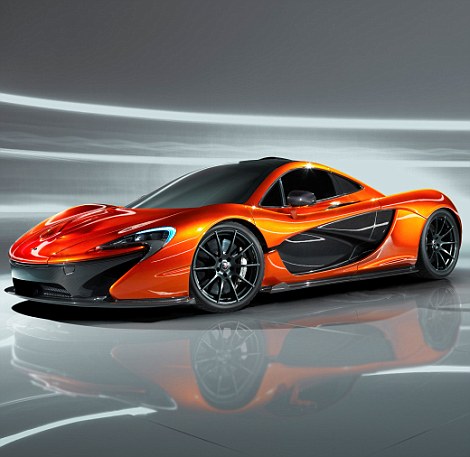 Hypercars from F1 rivals: The LaFerrari (left) and McLaren P1 (right) are two of the existing competitors made by manufacturers also competing in Formula One. However, both are around half the price of Mercedes’ new Project ONE 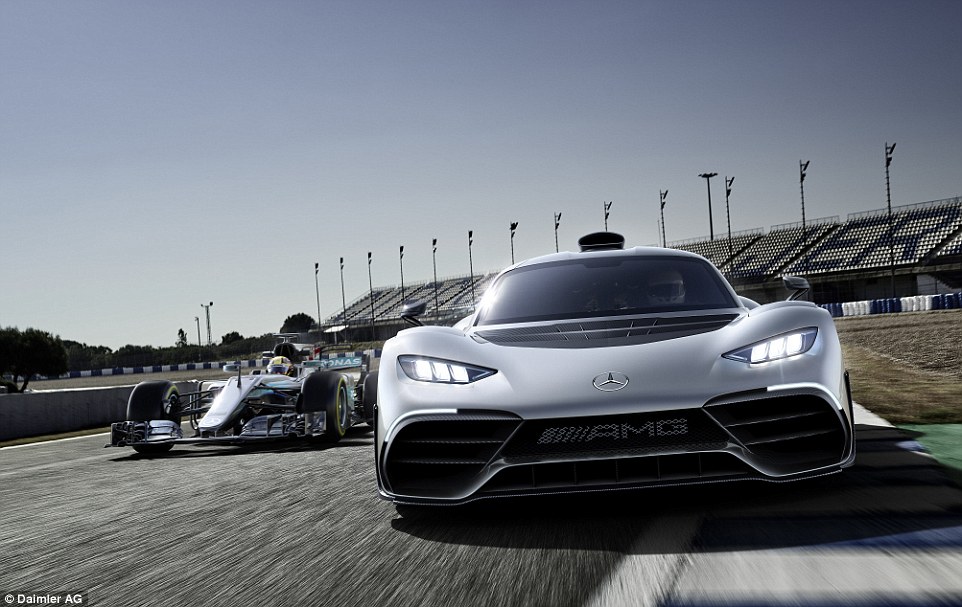 Side-by-side: While the Mercedes-AMG Project ONE will be a road-legal model, it will mostly be used on track (though not in a race against Lewis Hamilton, as this image suggests) 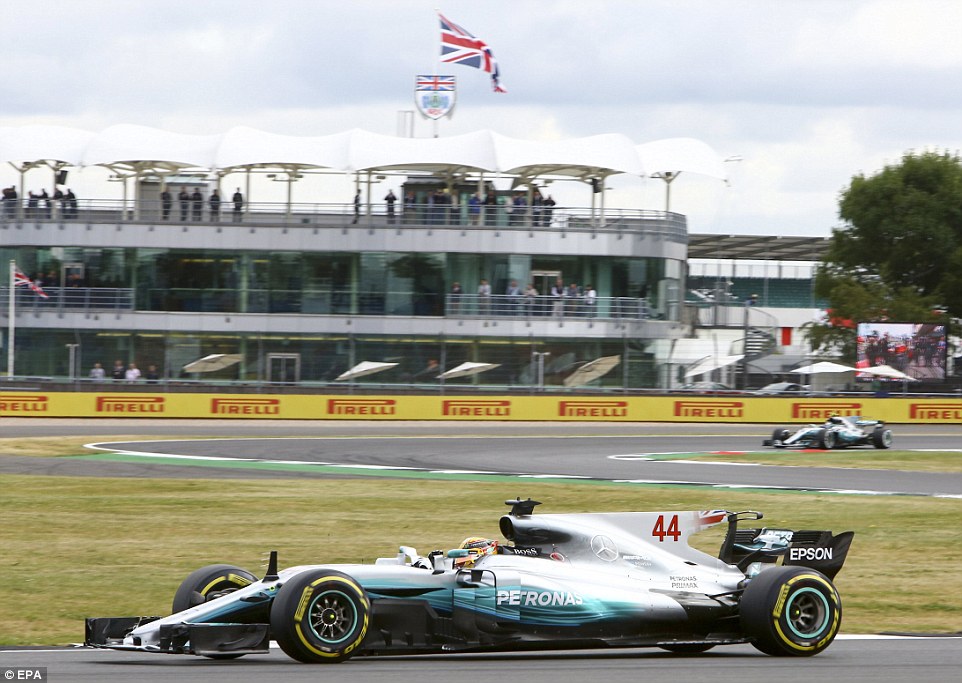 Hamilton has won two F1 titles with Mercedes after joining the German team in 2013. He’s on course to win his third – and fourth title overall – this season, pictured here taking victory at his home Grand Prix at Silverstone

Like the Aston Martin Valkyrie, there’s no denying that the design is performance orientated.

A gaping front bumper, carbon-fibre ducts in the bonnet, flaps attached to the sides, active winglets over the fron wheels and an intake on the roof are designed to feed as much air to cool the hybrid unit as possible, as well as make the Project ONE as aerodynamic as possible.

Also fed from the F1 project is the shark-fin that sits above the engine compartment, while a wrap-around diffuser and retractable rear spoiler – both designed to improve downforce – dominate the rear of the vehicle. 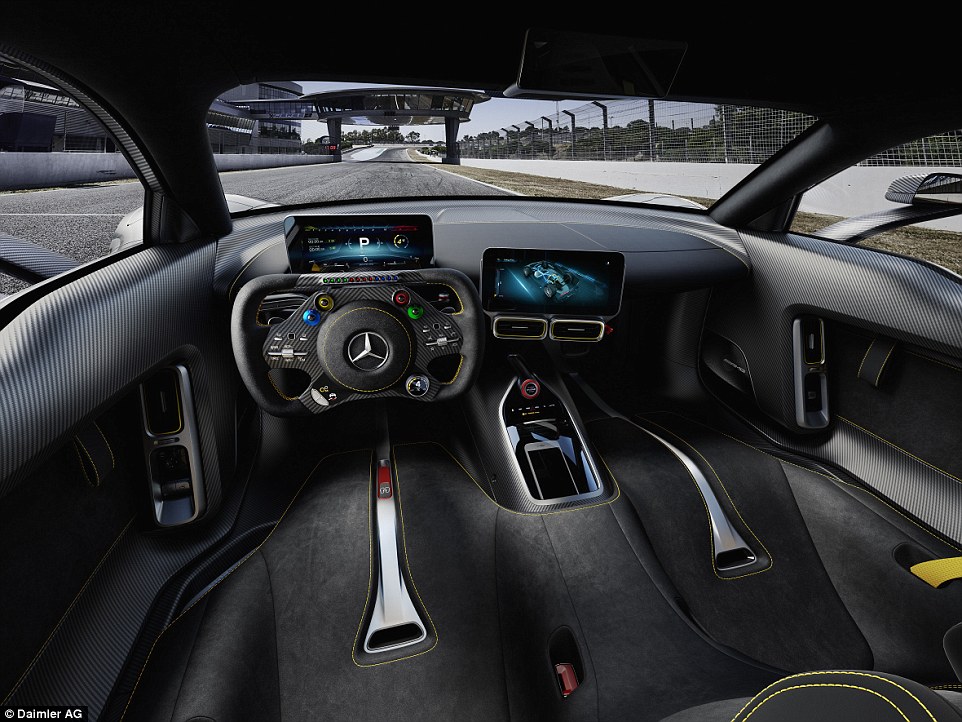 Mercedes says the interior is ‘F1 for two’. The steering wheel, cluttered with switches and toggles, certainly looks like the ones used by racers on a Sunday afternoon 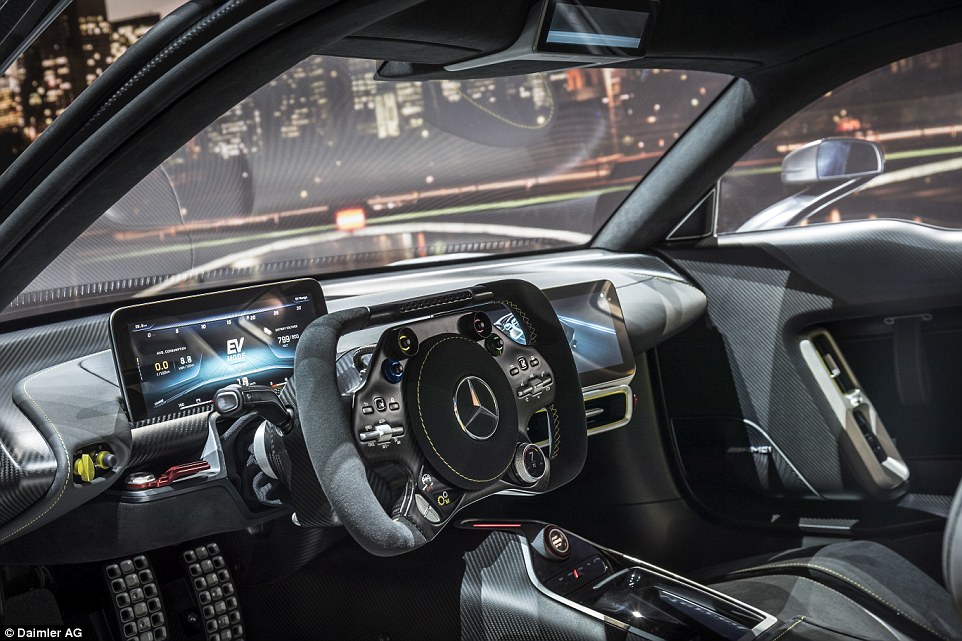 There are three screens in total in the cabin, one of which is linked to a camera at the back of the car to act as a rear-view mirror 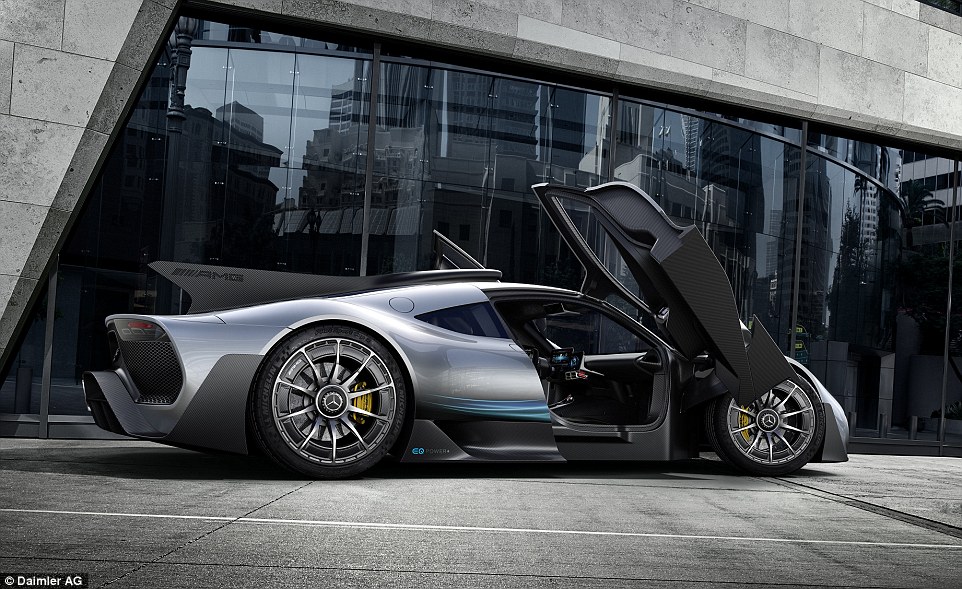 Combining carbon bodywork and a carbon-fibre monocoque chassis should mean the Project ONE is no heavyweight, though the German car maker has refrained from divulging its official weight just yet.

Inside, Mercedes says the cabin is ‘Formula 1 for two’, though it is most definitely more luxurious than the cockpit Lewis Hamilton has to lower himself into for each session.

Passengers will sit in carbon-fibre bucket seats and the driver will be gripping to a rectangular steering wheel scattered with switches and dials similar to the complex high-tech ones used in the premier racing series. 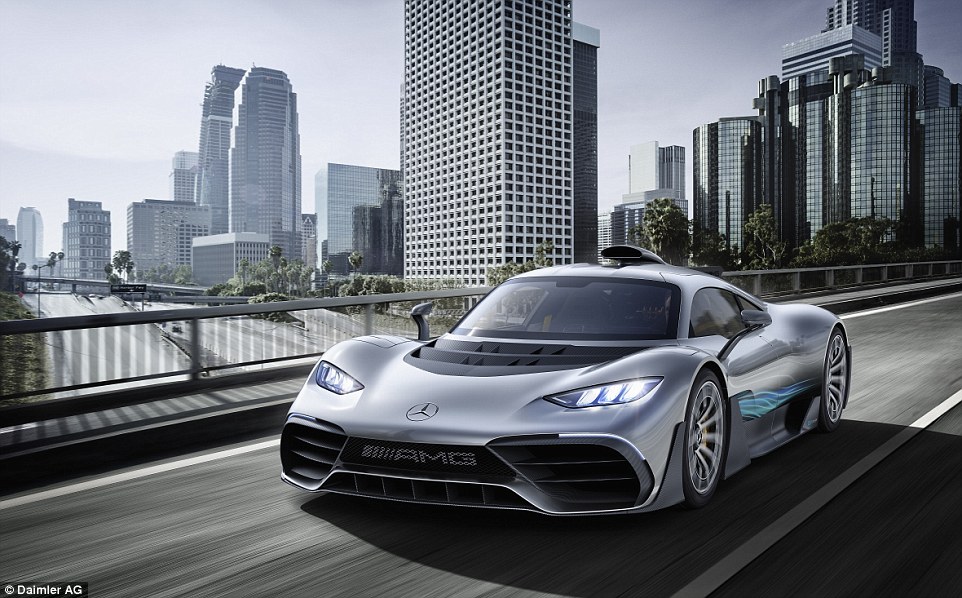 Mercedes says the car will have a 15-mile range under electric power only. Enough to nip to the shops and back 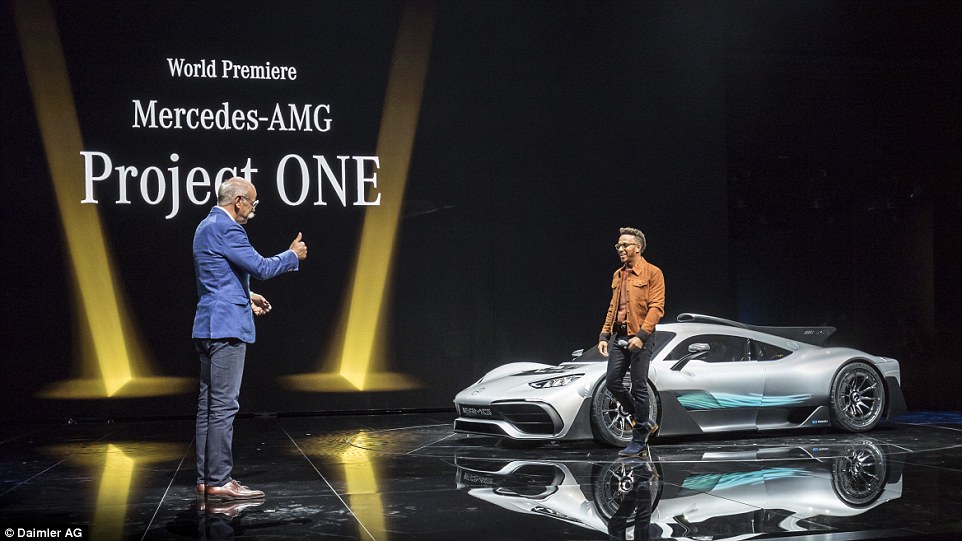 Lewis Hamilton pictured at the launch event with Dr. Dieter Zetsche (left), Chairman of the Board of Management of Daimler AG and Head of Mercedes-Benz Cars 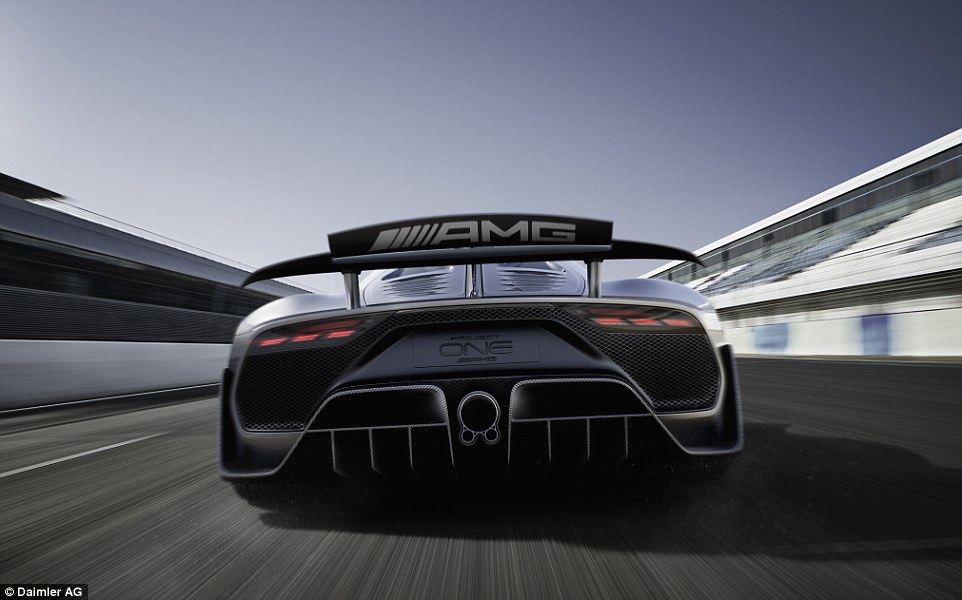 The Project ONE will feature a massive rear diffuser, a unqiue triple-exhaust outlet and a retractable rear wing

Two 10-inch displays sit on the dashboard – one behind the steering wheel and another sprouting from the centre console to feed vital information to the person trying to control almost 1,000bhp with their right foot.

A third screen – linked to a camera at the back of the car – acts as a rear-view mirror – ideal for seeing who is in your slipstream of if someone has left a shopping trolley behind your hypercar at the supermarket.

Mercedes has committed to making just 275 examples, all of which will be left-hand drive and priced at around £2.4million. Each car has already been promised to future owners who have stumped up an astronomical deposit to secure one, so there’s no need to get your financial adviser on the phone. 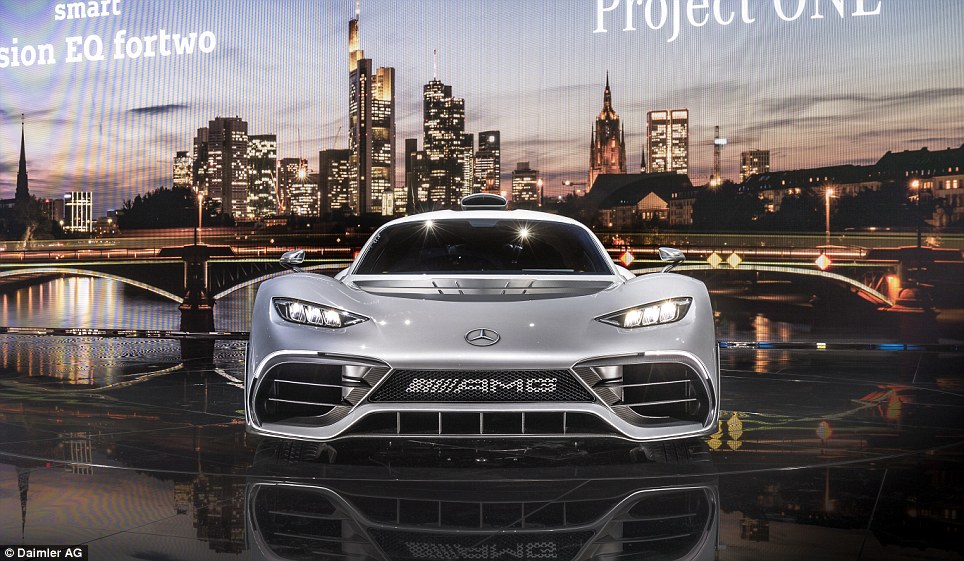 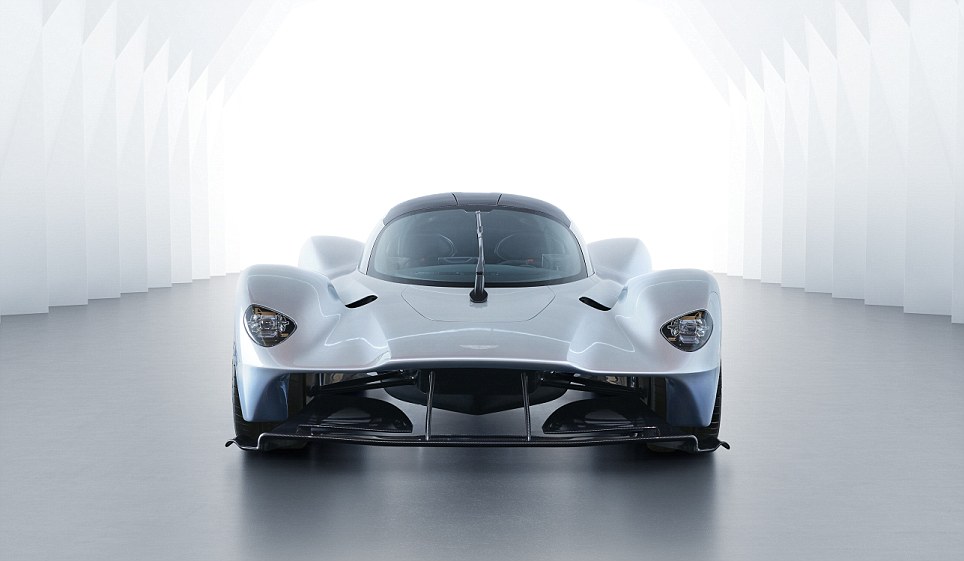 Here’s how the Mercedes-AMG Project ONE (left) and Aston Martin Valkyrie (right) compare side-by-side. Which one is your favourite? 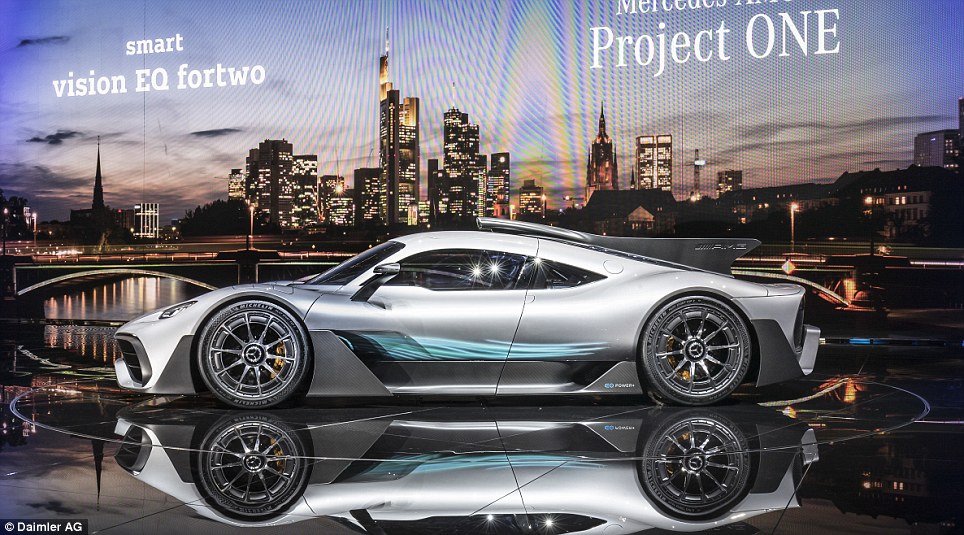 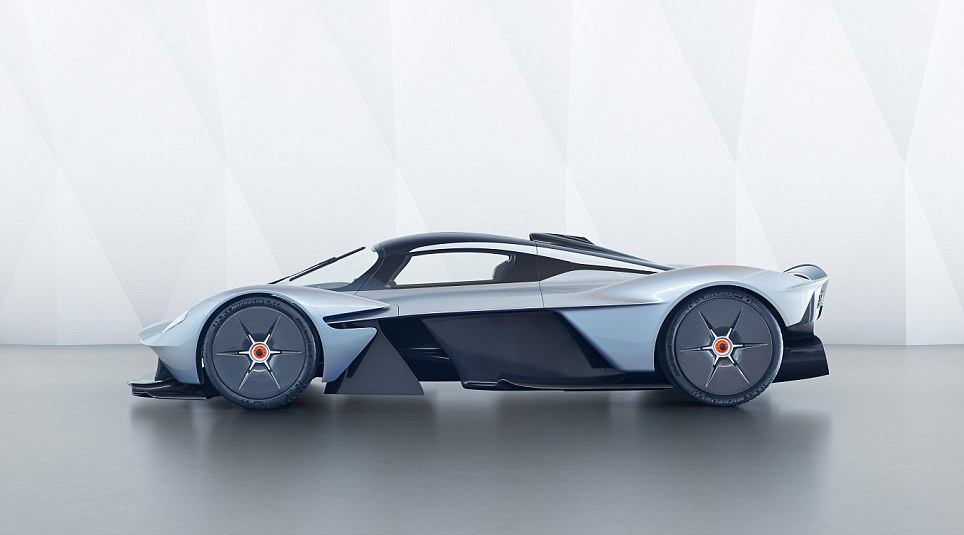 Both cars will cost from around £2.4 million and be available in limited (and now sold-out) numbers. Let us know in the comments section below if the Mercedes-AMG (left) is your favourite or if the Aston Martin Valkyrie (right) takes your fancy