Mercedes has released its first official images of the cabin for its next-generation electric luxury car – and it’s a feast of technology, including a dashboard wide single screen.

The Mercedes-Benz EQS – a zero-emission alternative to its flagship S-Class – is due to be unveiled on 15 April. It is expected to rival high-end luxury family cars, like the Audi e-tron GT and Tesla’s market-leading Model S.

Ahead of its full reveal event, the German brand has showcased the car’s dramatic interior, with the ‘MBUX Hyperscreen’ display – which is much debated given its distracting potential – being the standout feature.

Is this the future of car cabins? Check out the new MBUX Hyperscreen that will be used in the forthcoming Mercedes-Benz EQS luxury electric vehicle

The Hyperscreen is wider than most living room televisions.

The one-piece screen features the digital instrument cluster behind the wheel for the driver, a central infotainment screen and climate controls and even a media screen for the passenger – and when the driver is alone, this passenger-side screen displays digital art.

Dubbed ‘a big in-car cinema on wheels’ by the brand, it uses artificial intelligence to monitor the driver’s habits and preferences and acts as an in-car personal assistant – giving reminders, such as when a family member’s birthday is upcoming – and is being hailed as the ‘brains and nervous system’ of the new electric limousine.

While the technology is a showcase of how far in-car infotainment has come, it raises a huge question about the safety impact and the increased level of distraction caused to drivers, with ministers recently suggesting that vehicle touchscreens have contributed to road casualty stats not falling in recent years. 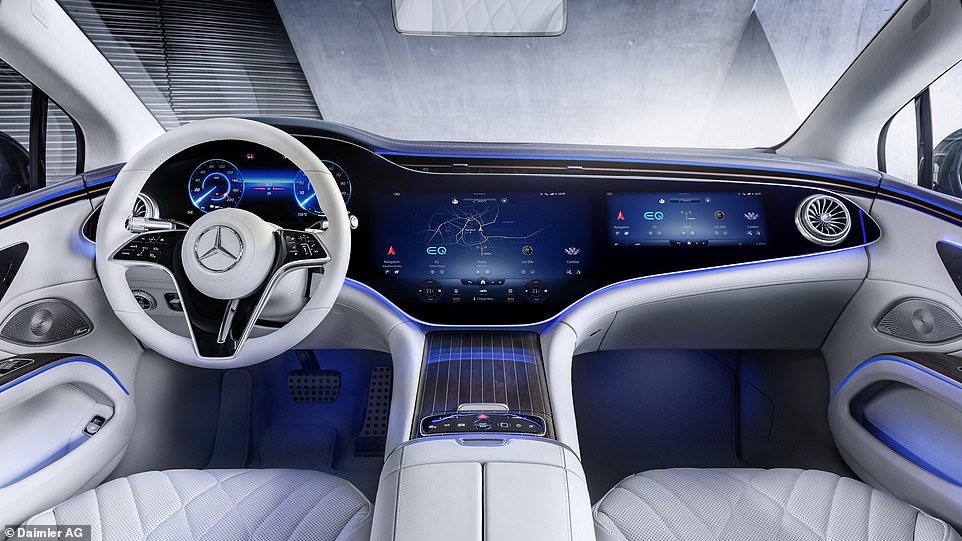 The screen measures 55.5-inch, which is bigger than many televisions in people’s homes. It is one single unit with a curved glass panel 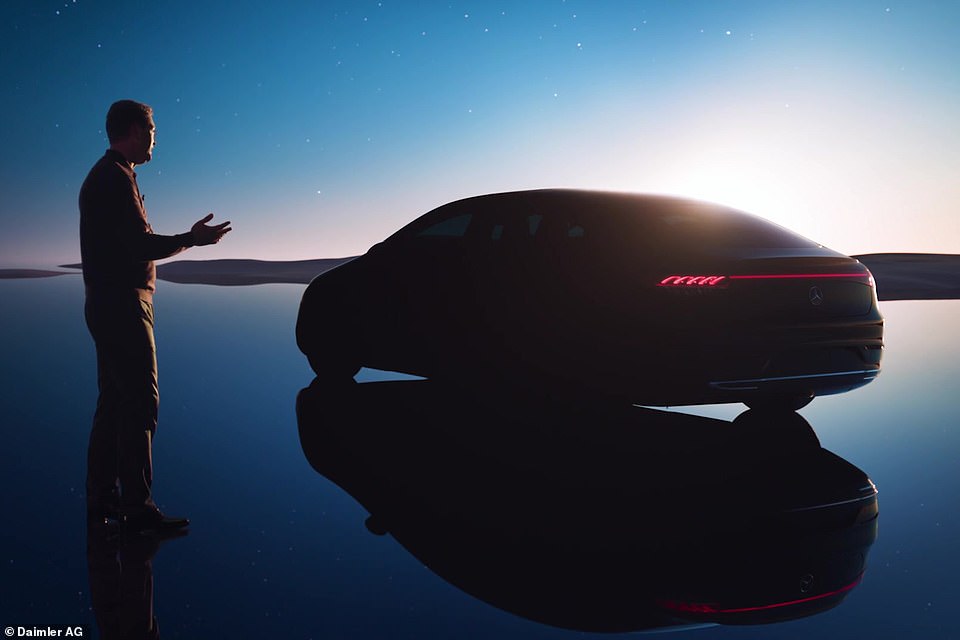 The Mercedes-Benz EQS limousine has yet to be revealed, but has already appeared this year in a video shown at CES 2021 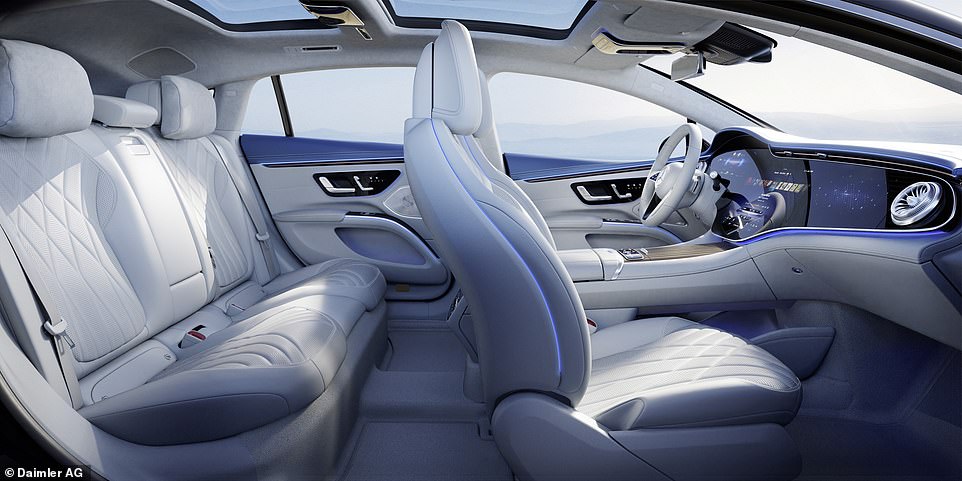 The Mercedes EQS is due to be unveiled in full next month. The five-seat luxury wagon is an electrified alternative to the brand’s flagship S-Class model

Dubbed ‘a big in-car cinema on wheels’ by the brand, it uses artificial intelligence – or AI – to monitor the driver’s habits and preferences and acts as an in-car personal assistant

The Hyperscreen was launched earlier this year during a digital presentation as part of the virtual Consumer Electronics Show in January. However, this is the first time we’ve seen images of it in production-form in a cat from various angles.

Speaking about the technology earlier this year, Mercedes-Benz said: ‘It is an assistant for the driver and front passenger who is constantly learning, thanks to artificial intelligence.’

In a bid to avoid distraction, special software prevents the driver seeing any movies or moving images on the screen of the passenger, who can listen via Bluetooth headphones.

But while Mercedes says the system won’t avert a motorist’s eyes from the road, it has been released at a time when ministers have warned that over-complicated car infotainment systems could be causing accidents – echoing drivers concerns over having to use a screen for what a button or dial once did.

Officials are alarmed that the rate of casualties has remained unchanged since 2010, despite significant improvements in the crash safety of vehicles; the latest figures show that five people die on the roads and 68 are seriously injured every day.

The Department for Transport said in a ‘call for evidence’ document last year that the failure to reduce casualties on UK roads could be a result of infotainment systems and mobile phones driving motorists to distraction.

‘Advances in car infotainment systems and mobile phone technology mean that there are increasing sources of potential distraction for drivers,’ the DfT wrote in the consultation introduction.

Motoring groups have also raised concerns that in-car touchscreens could be just as dangerous as using a mobile at the wheel.

In 2018 the chief executive of Highways England, Jim O’Sullivan, criticised ‘touchscreens with small, fiddly buttons’ and said the agency ‘doesn’t like them from a safety perspective’. 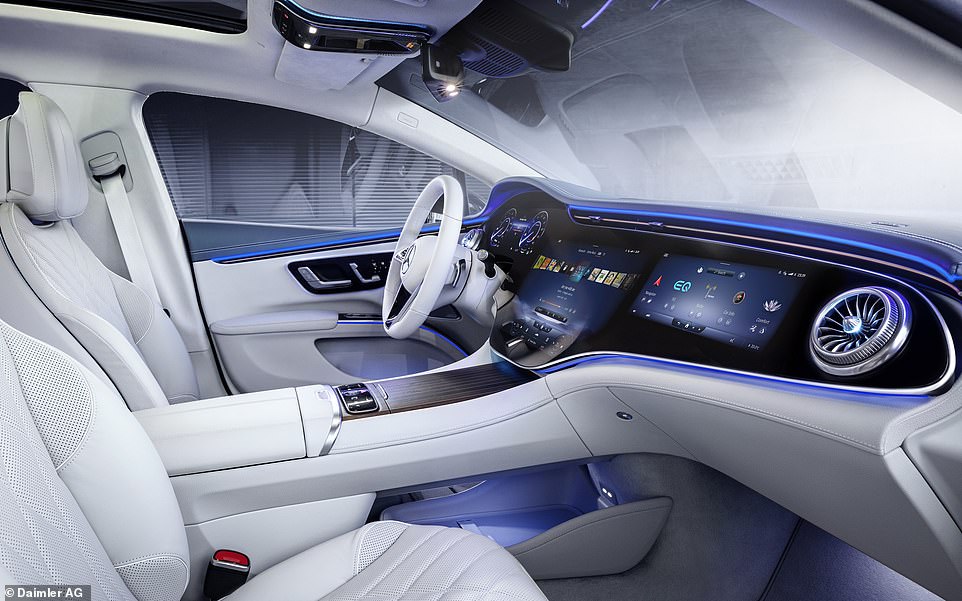 The artificial intelligence built into the system can provide reminders, such as when a family member’s birthday is upcoming, and is hailed as the ‘brains and nervous system’ of the new electric limousine 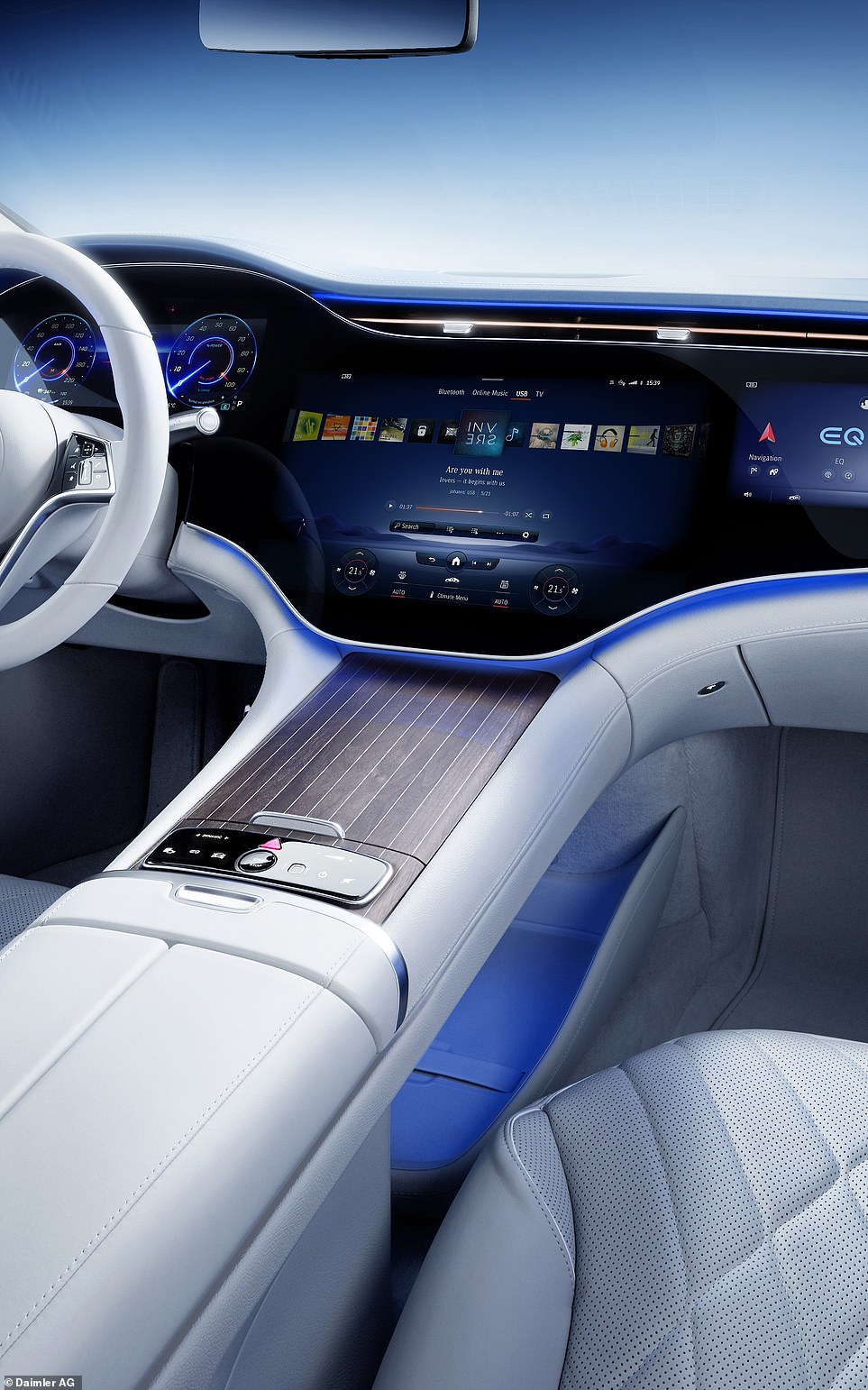 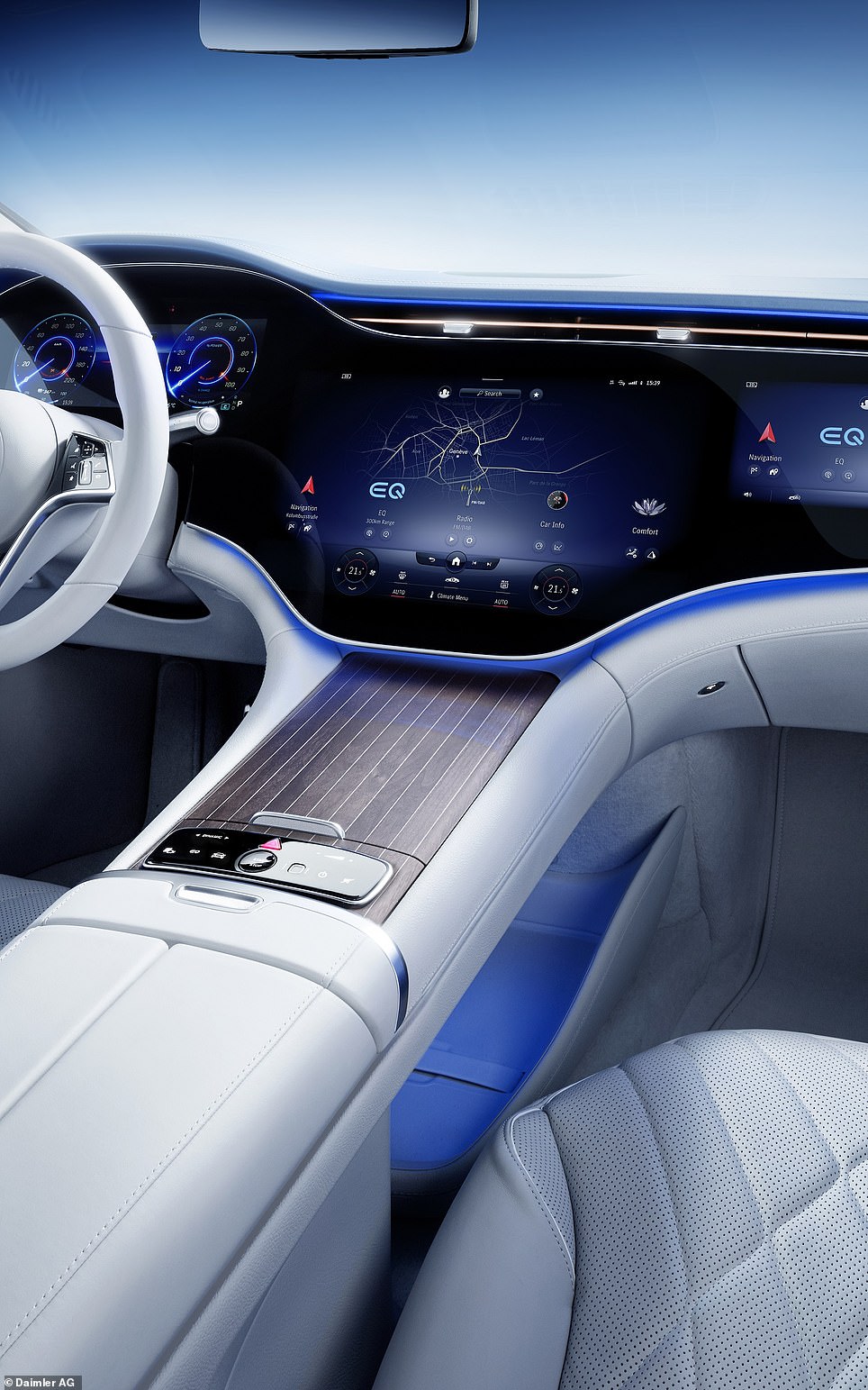 The section behind the steering wheel provides the driver’s instrument cluster while the largest part of the display is for infotainment functions. Here it switches from audio settings to the sat-nav screen 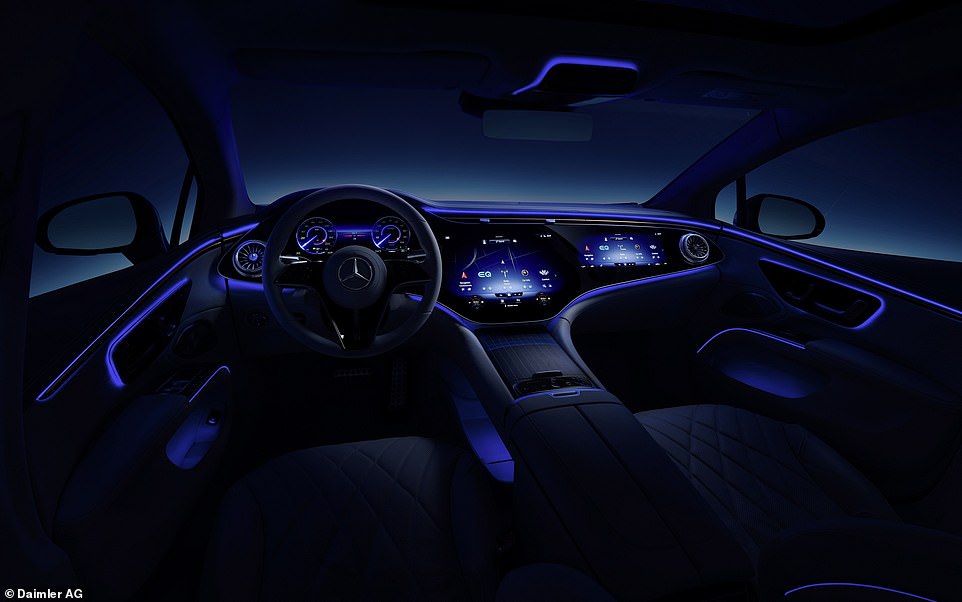 Images released by Mercedes a fortnight ahead of the EQS launch show how impressive and futuristic the cabin looks, especially lit up at night

Mercedes says the distracting impact of the screen has been limited by developing the MBUX Hyperscreen to be as easy to use as possible.

This includes dramatically reducing the number of menu screen, with the most important functions – such as radio settings and navigation input – accessible from the home screen.

Any other features used commonly by the owner will be tracked and added to the home menu by the system’s artificial intelligence.

For instance, the software can learn if a driver often calls a family member or loved one on their journey home from work in the evening. The AI will identify this and display a prompt to phone the number each time they begin their drive from the office.

The Hyperscreen is powered by 24GB of RAM, which is six times more than the average home computer.

It also has a built-in reactive light sensor, too, which automatically adjusts the brightness of the display to the conditions so the occupants can see it without glare in the day or being dazzled at night.

It won’t come as standard in all models, with Mercedes telling This is Money earlier this year that it ‘won’t be cheap’ and buyers ‘can’t get it for a low price’.

Entry-spec models will instead come with a tablet-style screen for the driver’s instrument cluster and a larger portrait-orientated display in the centre console and dash, similar to the one in Tesla’s latest machines.

The MBUX Hyperscreen doesn’t come as standard. Entry-spec models will instead come with a tablet-style screen for the driver’s instrument cluster and a larger portrait-orientated display in the centre console and dash, similar to the one in Tesla’s latest machines 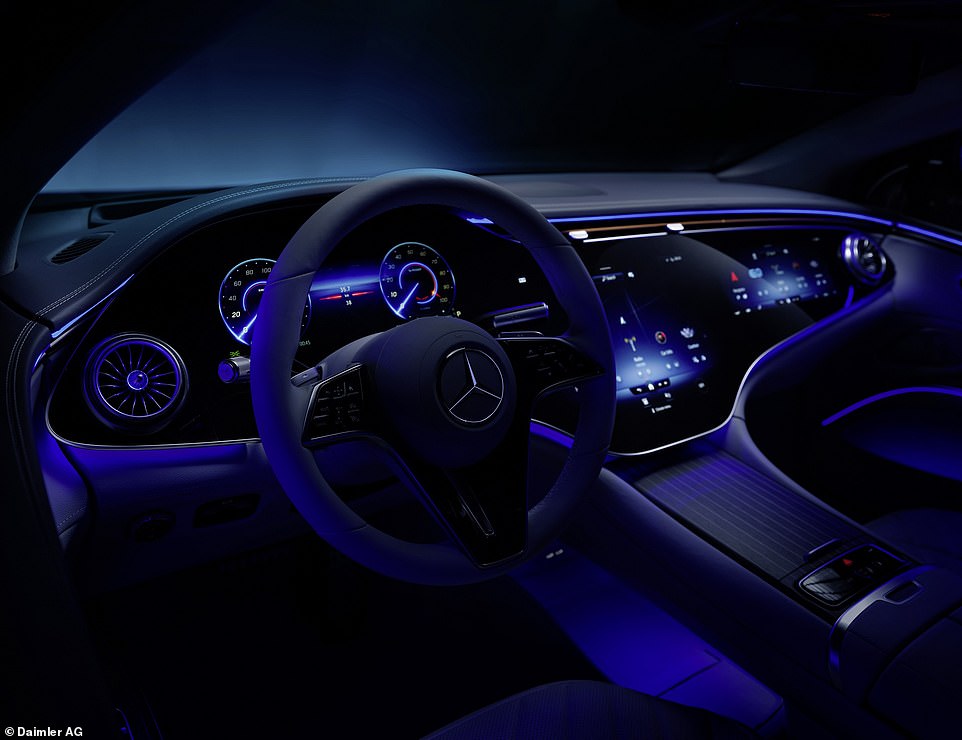 The Hyperscreen is powered by 24GB of RAM, which is six times more than the average home computer

When there is no passenger in the car, the screen furthest away from the driver will instead display digital art 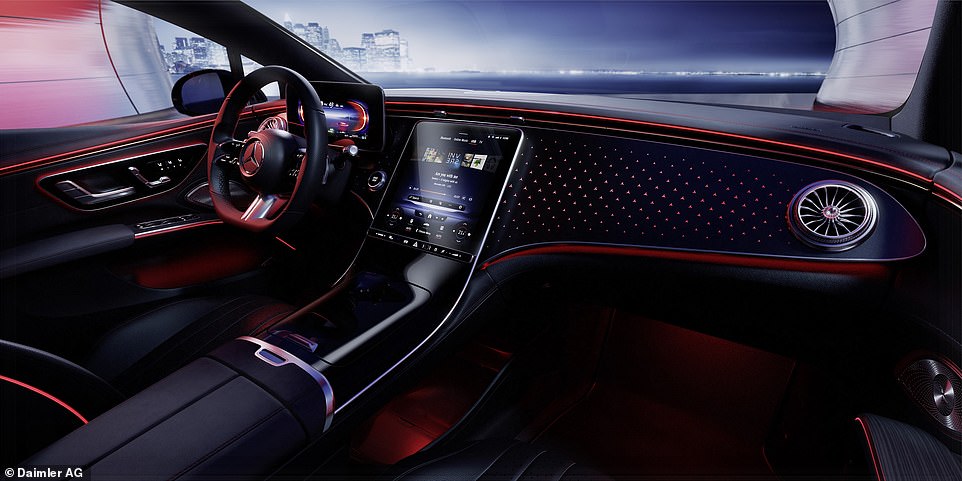 The massive cinema-like screen has a built-in reactive light sensor, too, which automatically adjusts the brightness of the display to the conditions so the occupants can see it without glare in the day or being dazzled at night

Other features of the interior confirmed by Mercedes ahead of the cars full reveal is the inclusion of a high-end Burmester surround sound system with 15 speakers and 710 watts of power.

The system has two ‘sound experiences’ built in, which provide background noise to fill the void left by the lack of a rumbling petrol or diesel engine under the bonnet.

The German luxury brand has also kitted out the EQS with the latest interior air filtration system, which traps fine dust, pollen and microparticles before they can enter the cabin. A charcoal filter also blocks out sulphur dioxide and harmful nitrogen oxides.

Mercedes says it blocks out up to 99.65 per cent – to be precise – of particles from entering into the vehicle.

Also as part of the system is Mercedes’s ‘Energising Comfort’ ambiance system.

This can tailor the cabin to the driver’s mood and desires by adjusting the climate control, lighting, background music and interior fragrance.

Three different settings are pre-programmed: ‘Forest Glade’ pumps out woodland smells and the sound of tress rustling in the wind; ‘Sounds of the Sea’ plays ocean waves and the sounds of seagulls, while also emitting occasional bursts of cool air; and ‘Summer Rain’ combiners the soundscape of distant thunder and pattering rain. 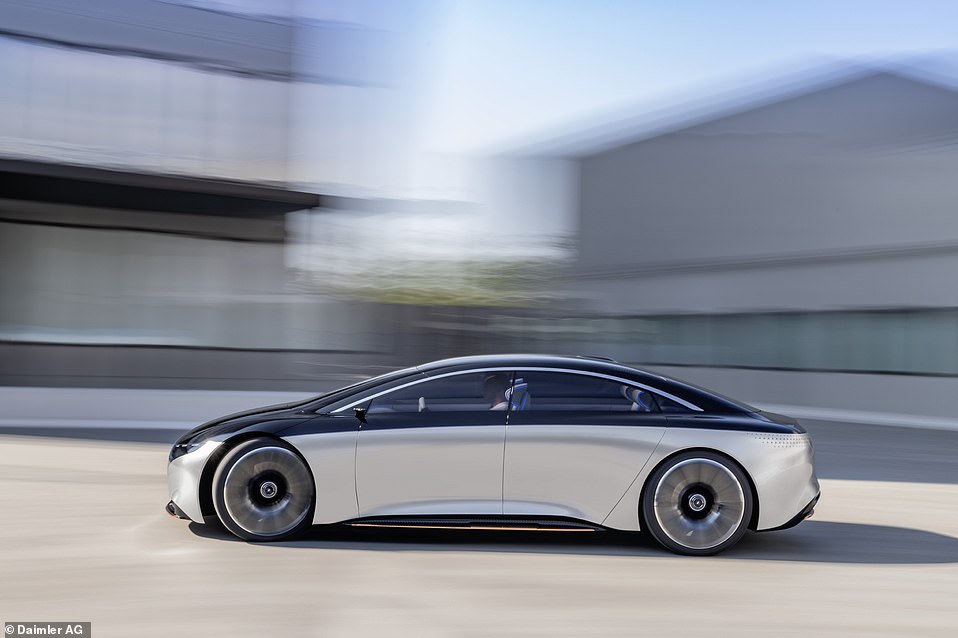 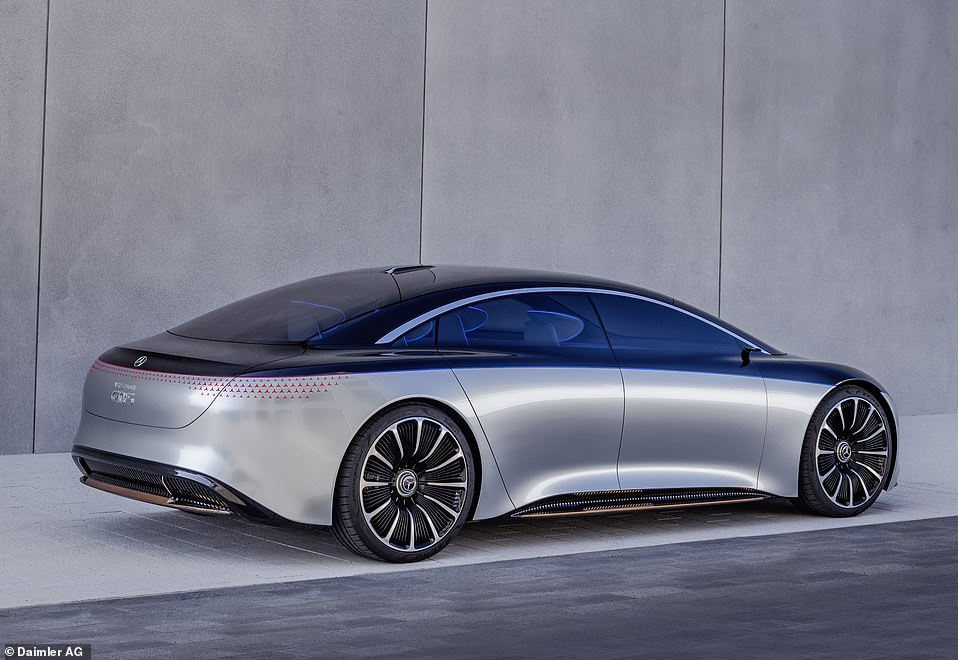 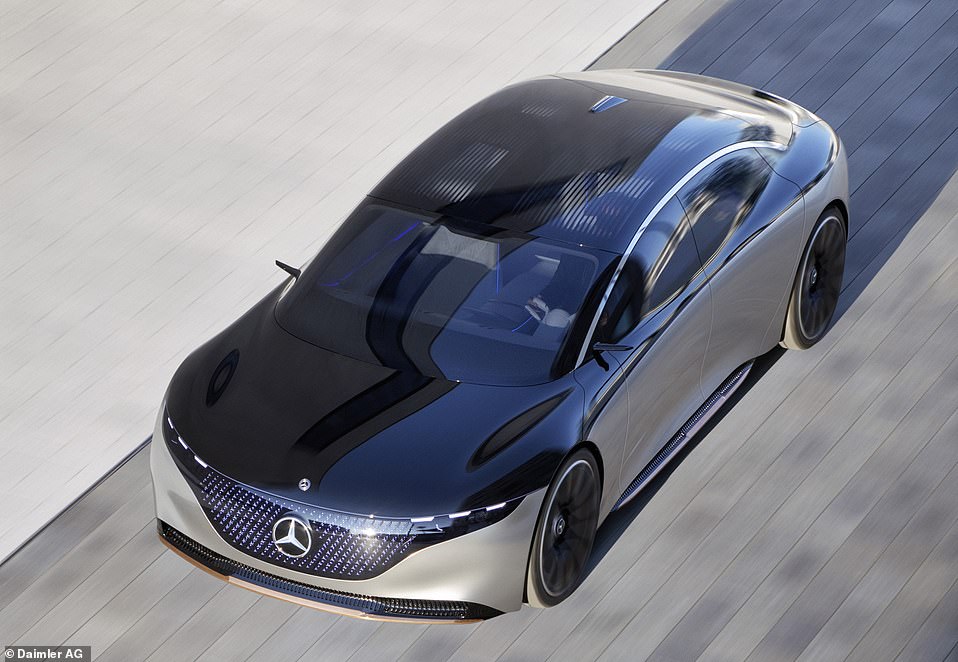 Very few performance figures for the production version of the EQS have yet to be confirmed, though bosses said it will have a range of up to 434 miles 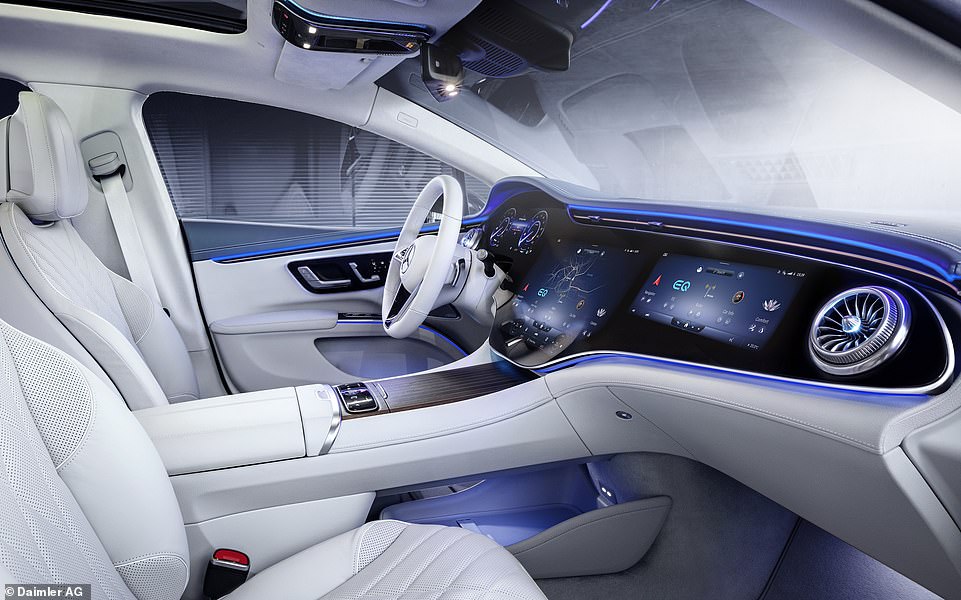 The big question is whether this enormous screen in the EQS will distract users. Mercedes says it has special software that prevents the driver seeing any moving images on the screen of the passenger, who can listen via Bluetooth headphones

For those planning on long-distance treks in their expensive EQS – or want to catch a few minutes of sleep while its batteries are recharging – there’s even a ‘Power Nap’ function.

This plays a soothing theme that’s designed to put you to sleep quickly, and when activated even lowers the window blinds and reclines the seat.

The user can pre-set the duration for how long they want to nod off – or pro-programme it for when charging has finished – so the car can wake them up using the seat massaging function and cool gusts of air from the climate control.

Specific details about the Mercedes EQS’s performance, range and price are yet to be confirmed – we will need to wait another couple of weeks for this.

It is widely expected to closely replicate the Mercedes-Benz Vision EQS concept, which was revealed in 2019 with a claimed range of 434 miles.  It will be one of four all-electric Mercedes models to launch in 2021.