Spring has always been a popular time to visit Holland and a stunning new set of photographs by Dutch snapper Albert Dros confirms why.

Entitled ‘Magical Spring in The Netherlands’, the collection showcases showstopping images of Holland’s famous tulip fields alongside shots of wildlife, wildflower-filled forests and windmills shot in the hazy spring light.

Dros has taken landscape photographs all over the world, from Kazakhstan to Dubai. During the pandemic, however, he refocused his attention on his home country, resulting in this album of breathtakingly beautiful shots.

‘Spring in the Netherlands is just so pretty because all of the flowers start to bloom,’ Dros told MailOnline Travel. ‘We have of course our famous tulips, but we also have a lot of wildflowers that bloom everywhere.

‘Then there are all the animals everywhere. The horses in the fields, the birds, the baby sheep. That in combination with the soft magical morning light makes it like a fairy tale’.

Scroll down to see Dros’s magical collection of photographs.

Holland is famous for its windmills, but Dros revealed that the buildings are particularly stunning to photograph in the spring. He said: ‘The windmill parks are super-beautiful in spring because there are many flowers around all of the windmills’ 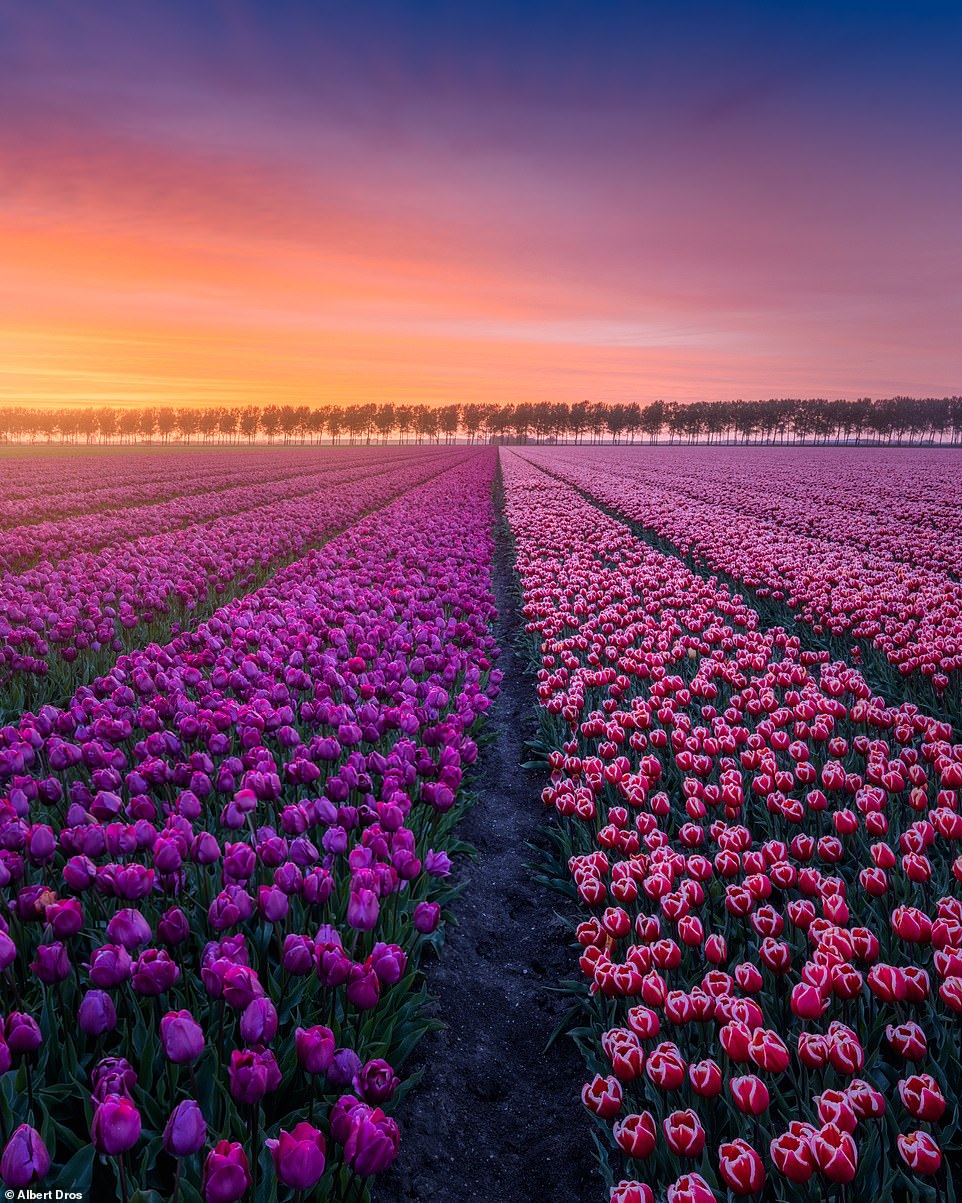 Tulips are an emblem of Holland. They bloom across the country from April to May. Dros said: ‘I love to capture the colours of nature’ 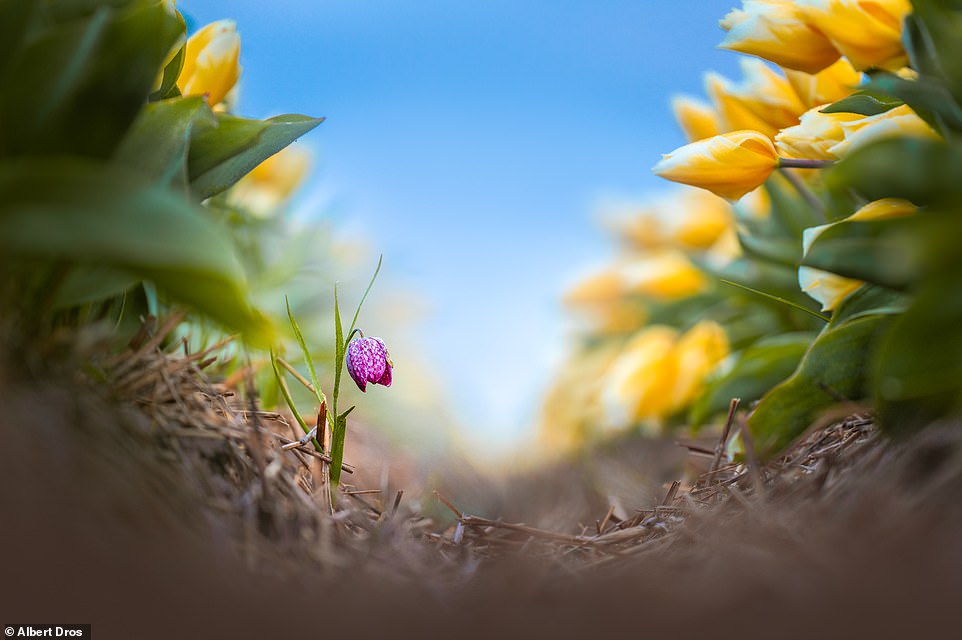 This photograph is entitled ‘Be Different’. It depicts a checkered lily, which Dros explained is a ‘very rare’ sight in the tulip fields of Holland 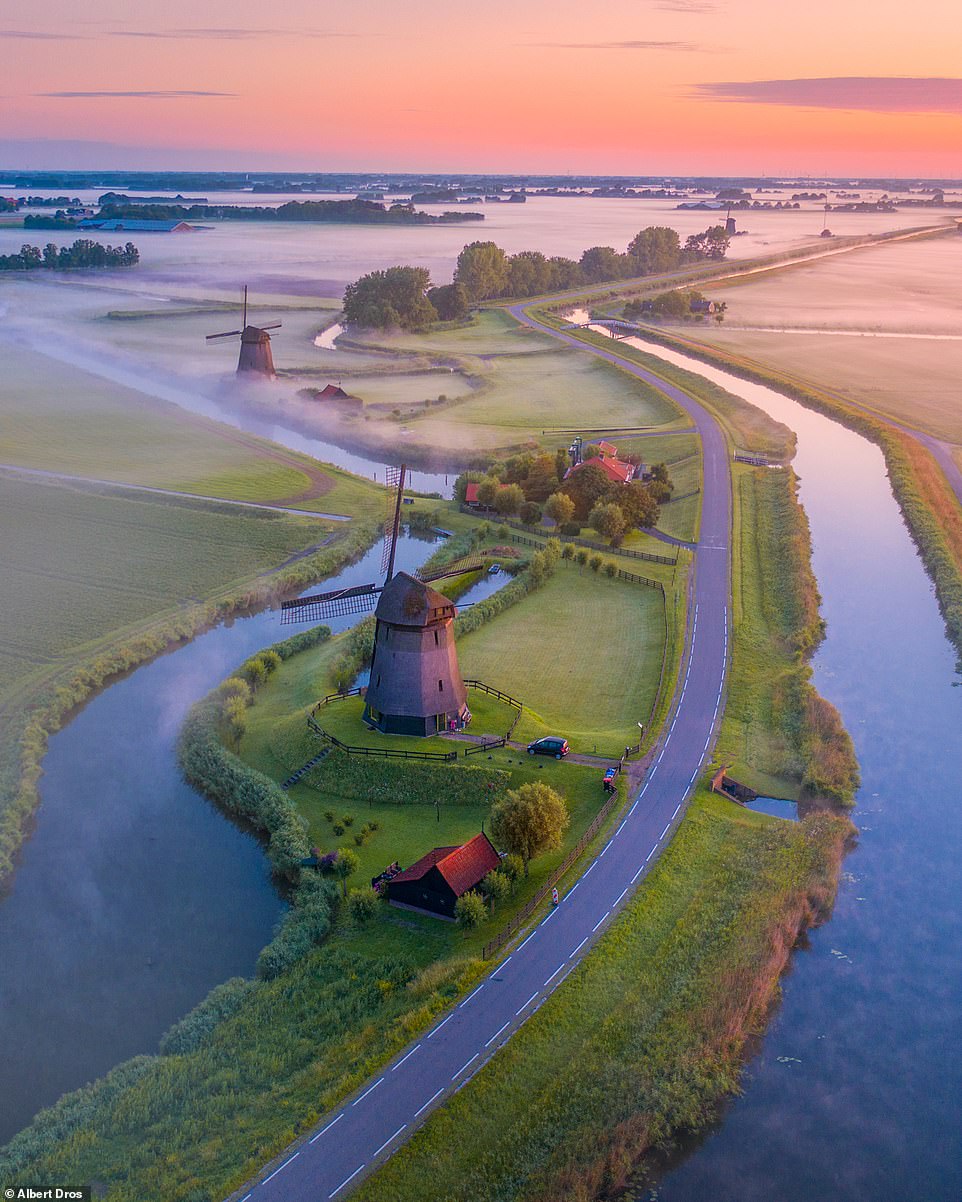 Dros revealed that you have to be prepared  to get up early to get the best photographs of Holland’s windmills. He said: ‘Be very early before sunrise  – around 5 to 5.30am –  before the tourists!’ 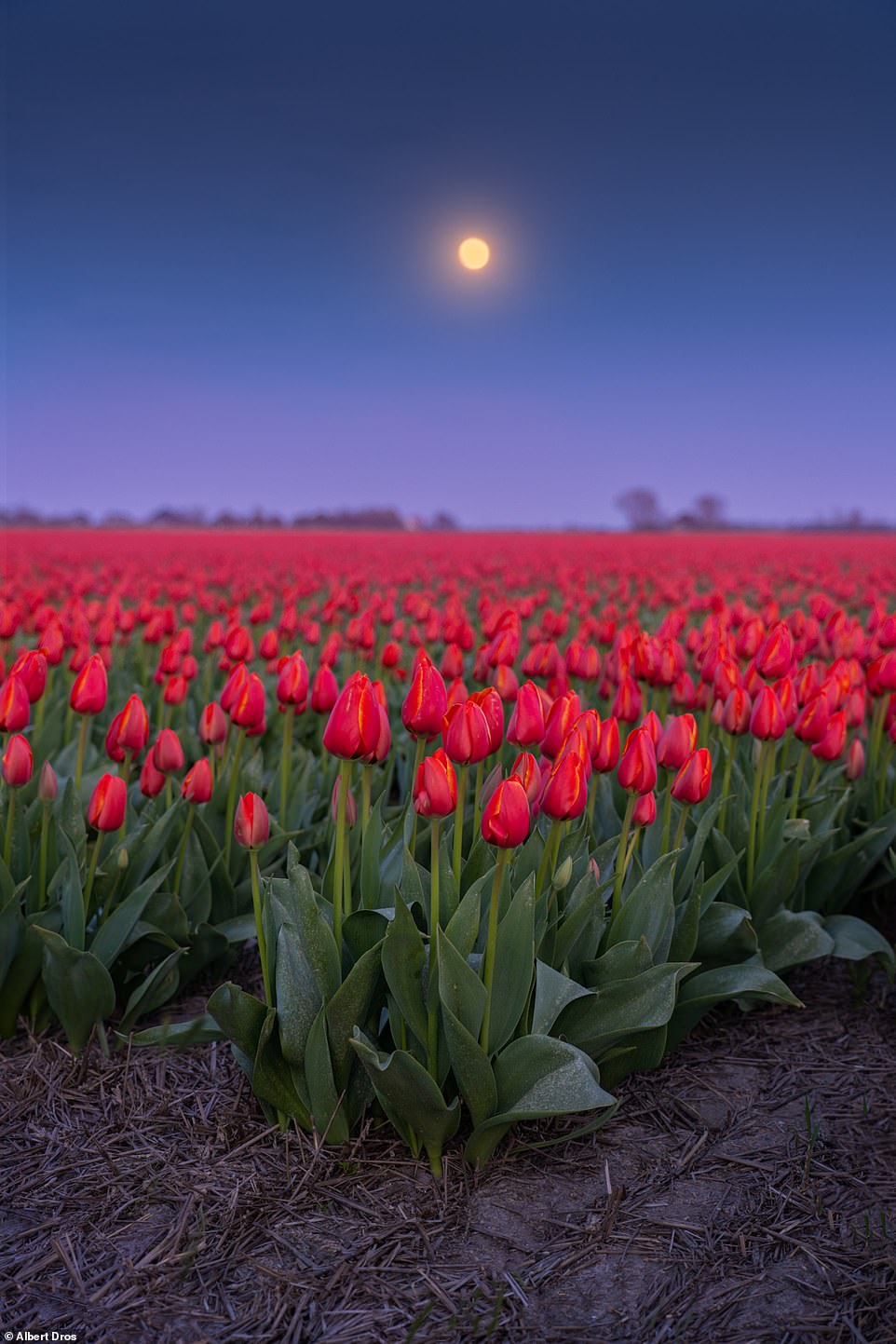 Pictured is a full moon above a red tulip field. Dros said: ‘Spring in the Netherlands is just so pretty’ 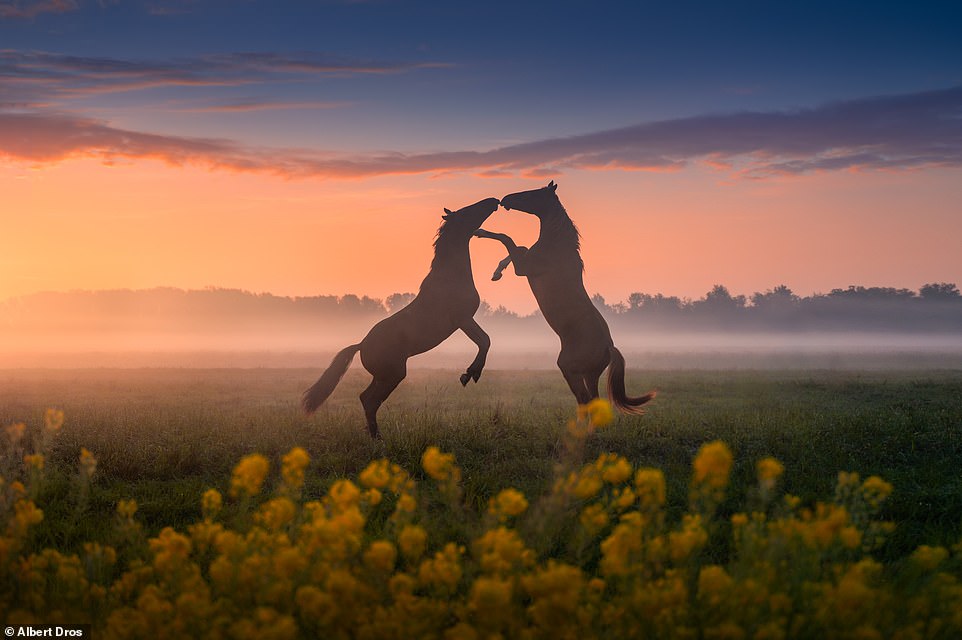 Dros revealed that there are animals everywhere in Holland in spring. He said: ‘The sounds of them in the early morning when they are the first to wake up always puts a smile on my face’ 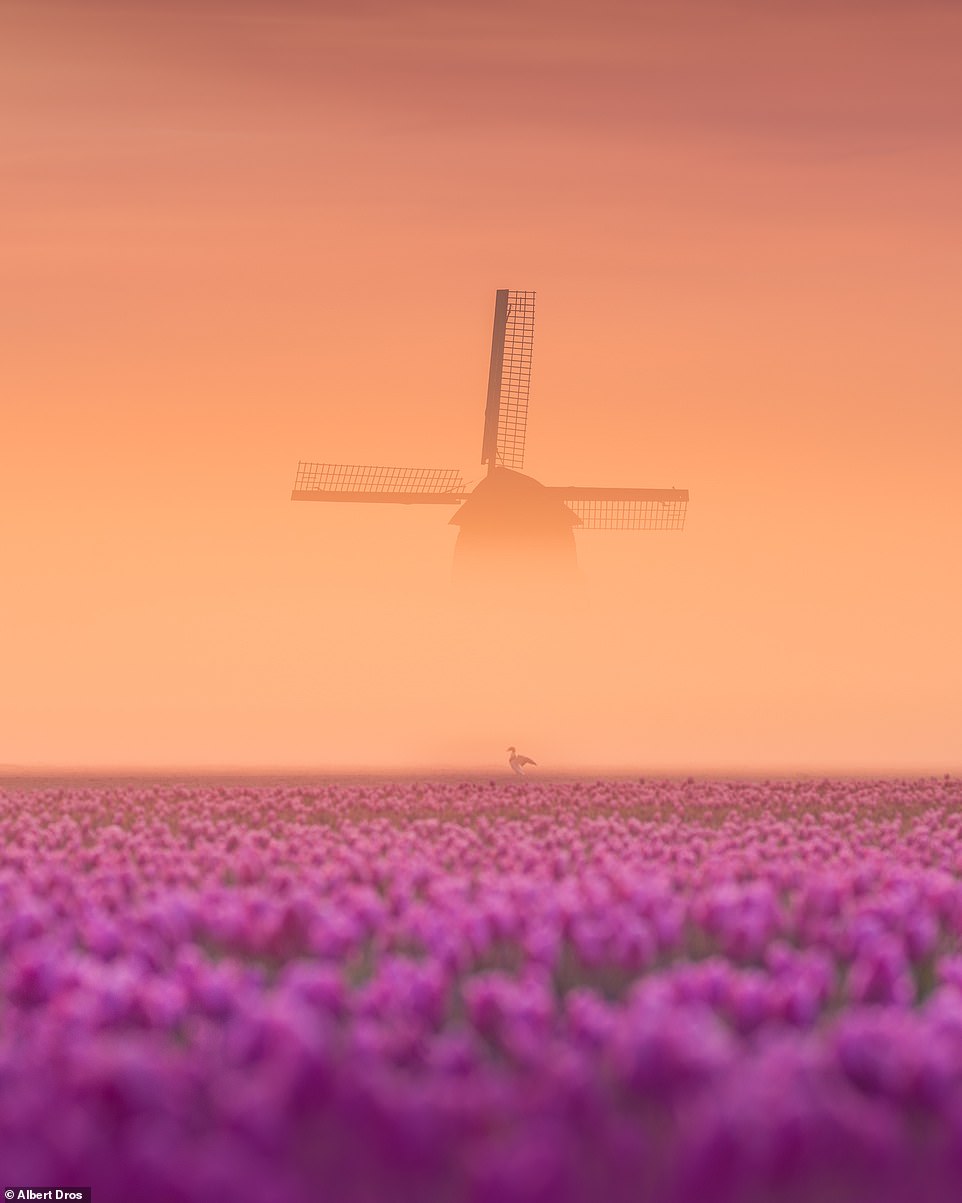 Pictured is a goose spreading its wings on a foggy morning. Dros said: ‘Wake up at four in the morning and drive to a nice location in the countryside when there is some morning fog around, and you’ll be amazed how beautiful the country looks’ 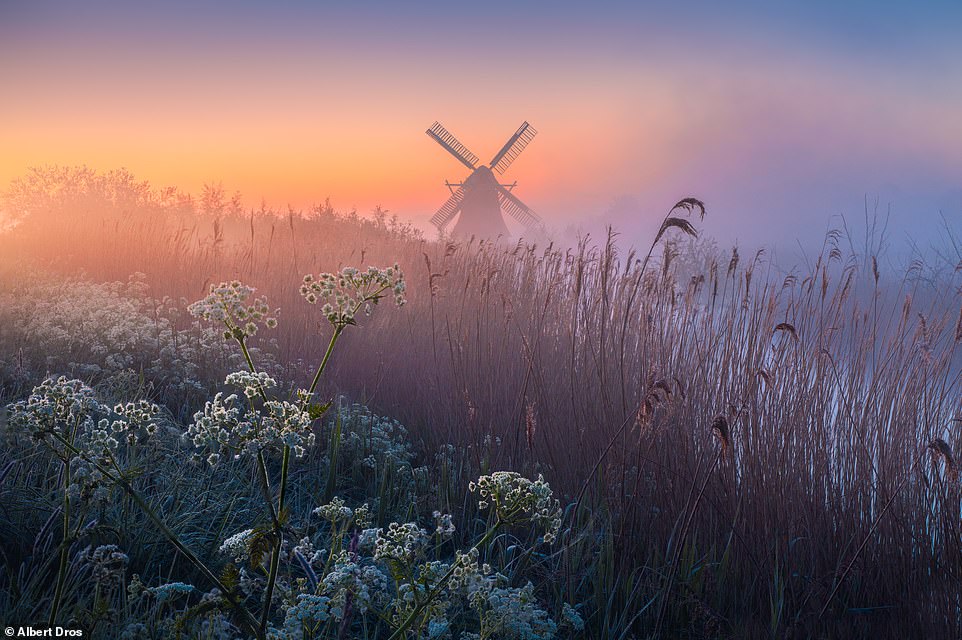 Dros called this purple-hued image Mill of the North. He said that the spring flowers blooming around Holland’s windmills give the iconic structures ‘that extra touch of magic’ 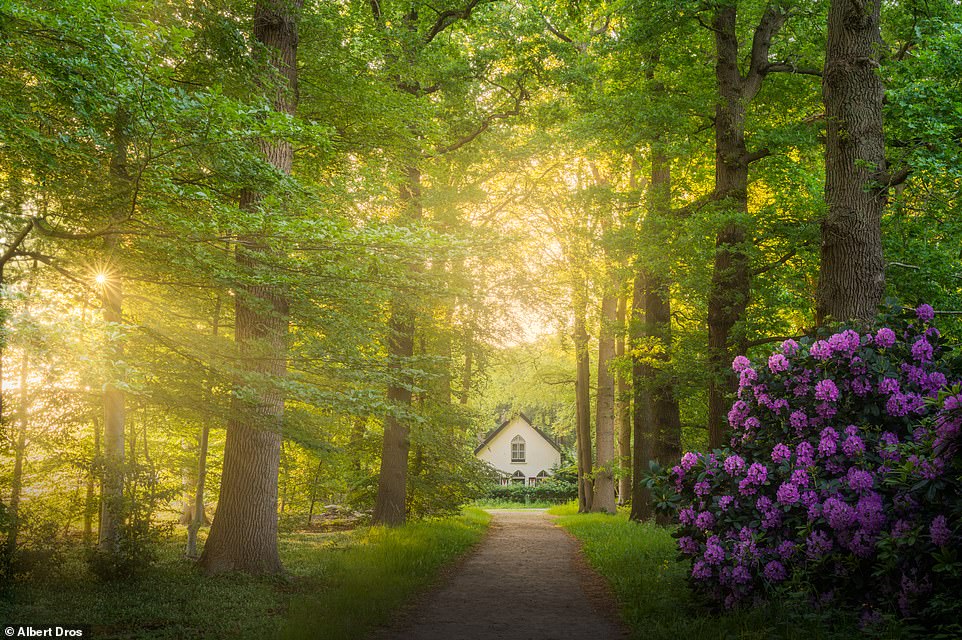 Dros revealed that the atmosphere in the Netherlands feels different in spring. He said: ‘I think it’s mostly because it’s coming after the winter transition. Suddenly, trees start to get their green leaves again’ 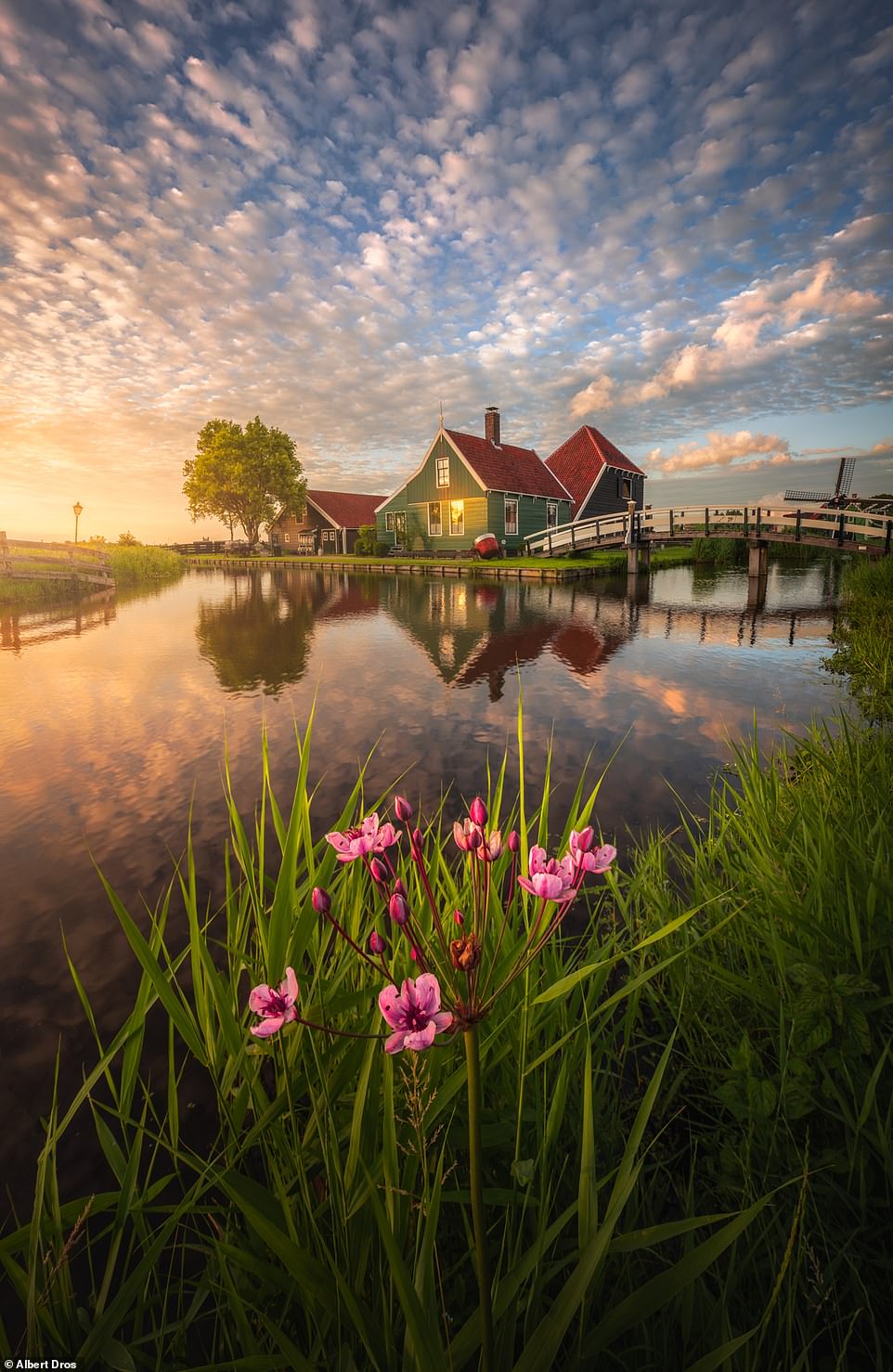 Pictured is one of the historical buildings at Zaanse Schans Windmill Park, a 20-minute drive north of Amsterdam. This area of Holland is full of windmills, wooden houses, barns, workshops and even a cheese factory 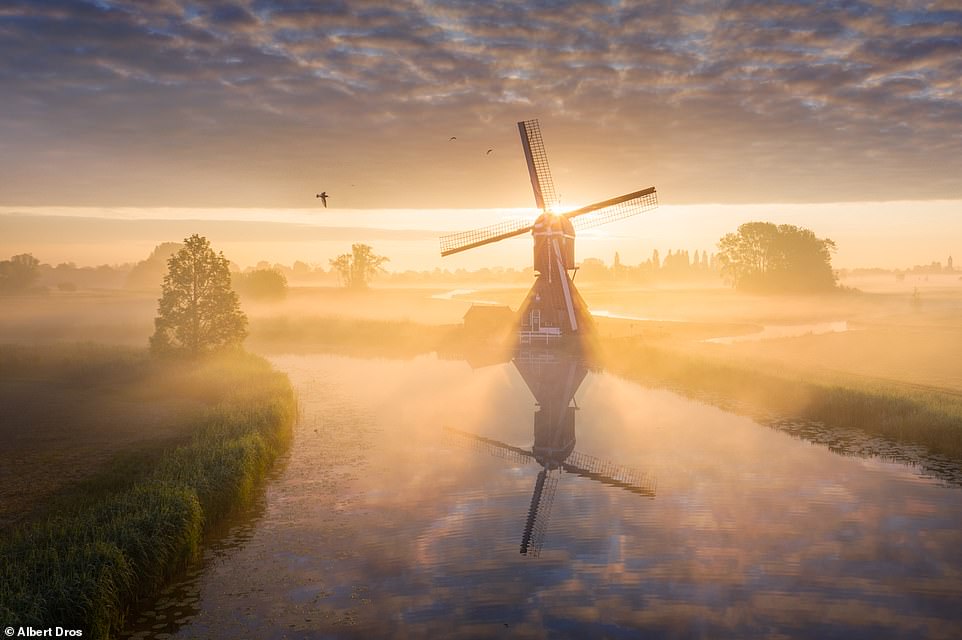 ‘The most important thing is knowing the weather and having the drive and passion to really wake up early for that magical light,’ Dros said, explaining how to take a stunning springtime photo like this one 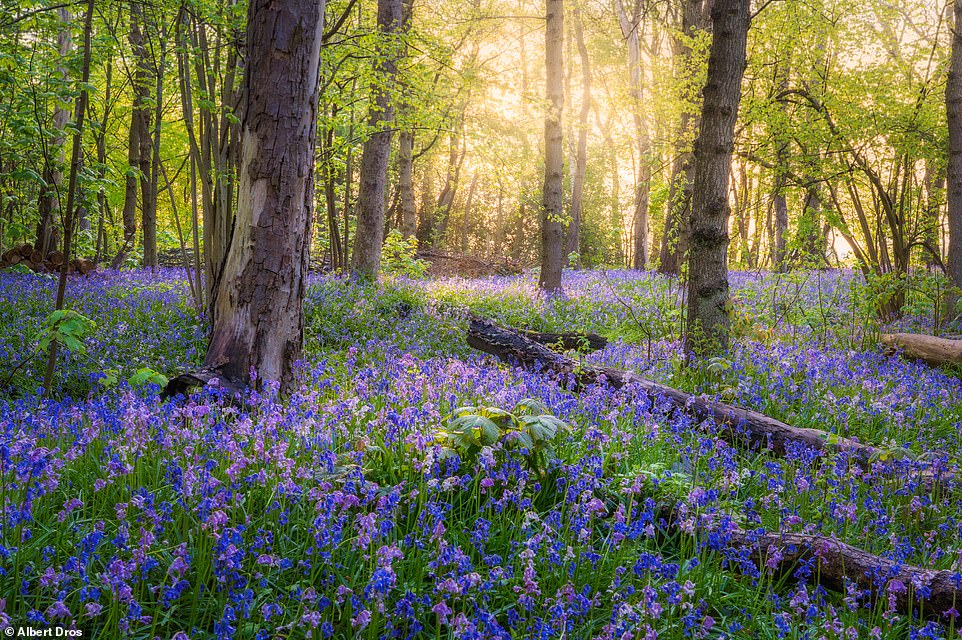 This pretty photograph showcases a forest with a carpet of hyacinth flowers. Talking about spring in Holland, Dros said: ‘We have of course our famous tulips, but we also have a lot of wildflowers that bloom everywhere’ 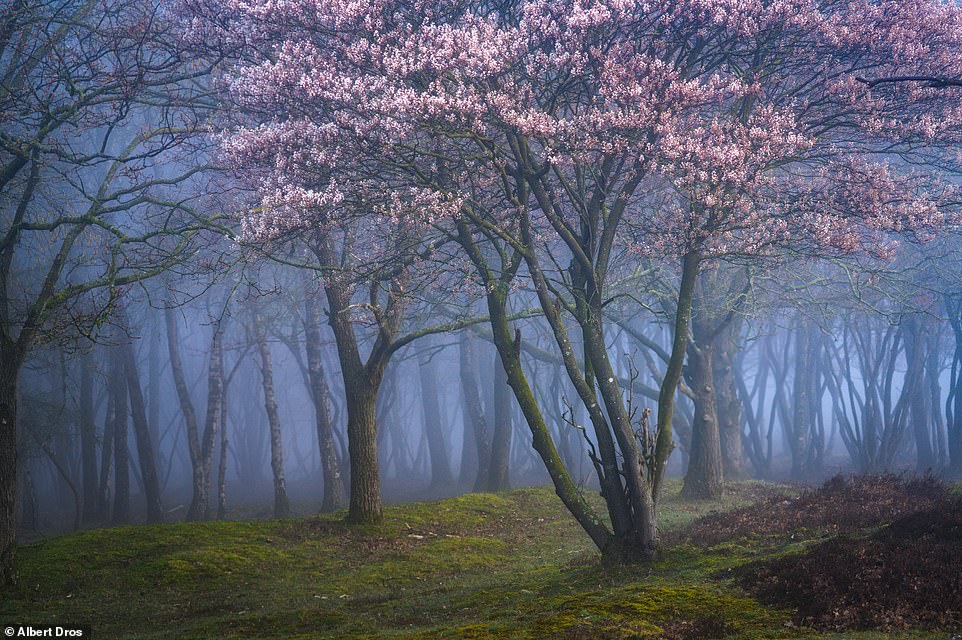 Dros explained how he likes to capture landscapes in ‘the soft magical morning light’. Although he confessed that the light ‘doesn’t always happen of course’ 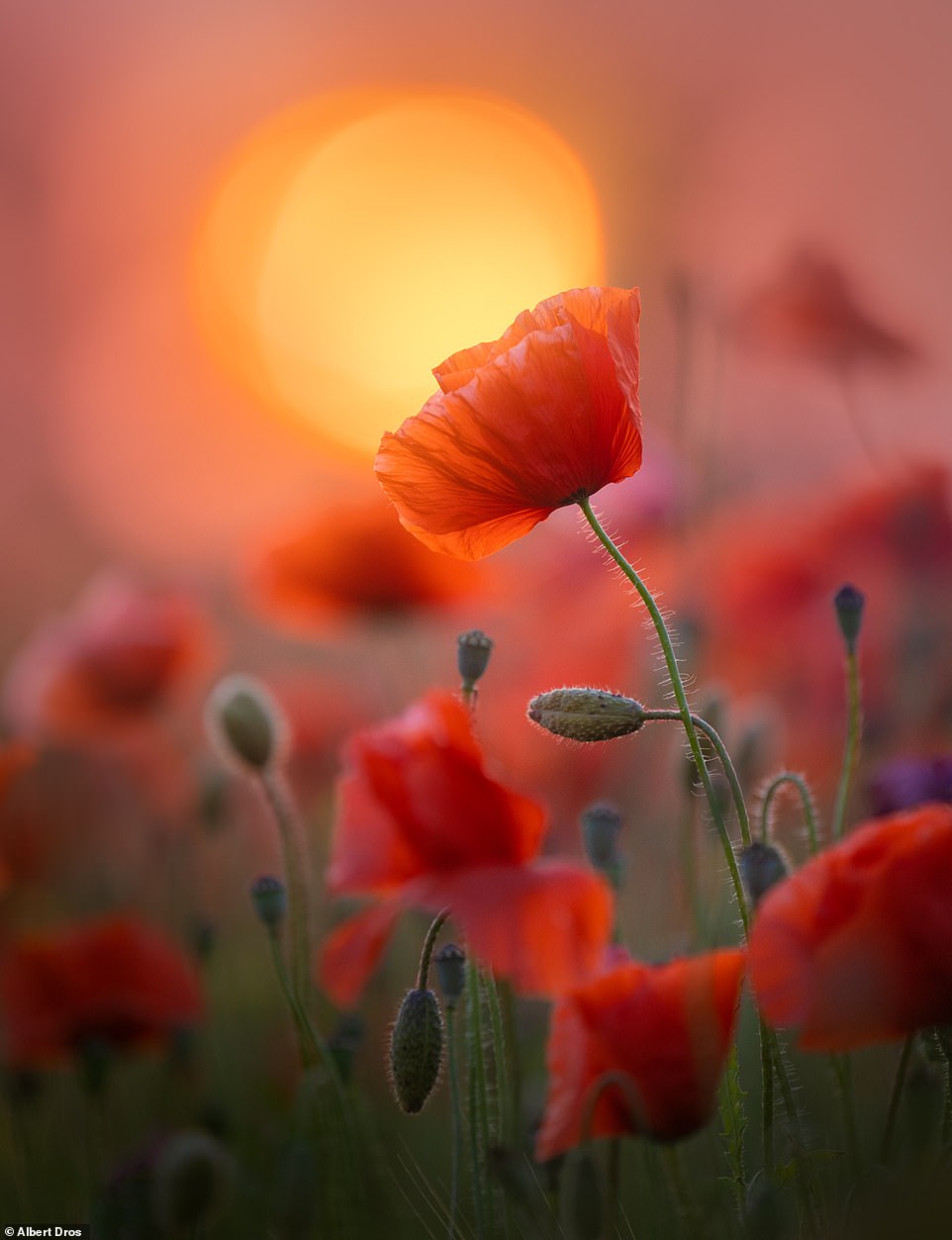 ‘Right after the bloom of the tulips you’ll find many poppies in the Dutch countryside,’ Dros revealed. ‘This one was photographed right after sunset’ 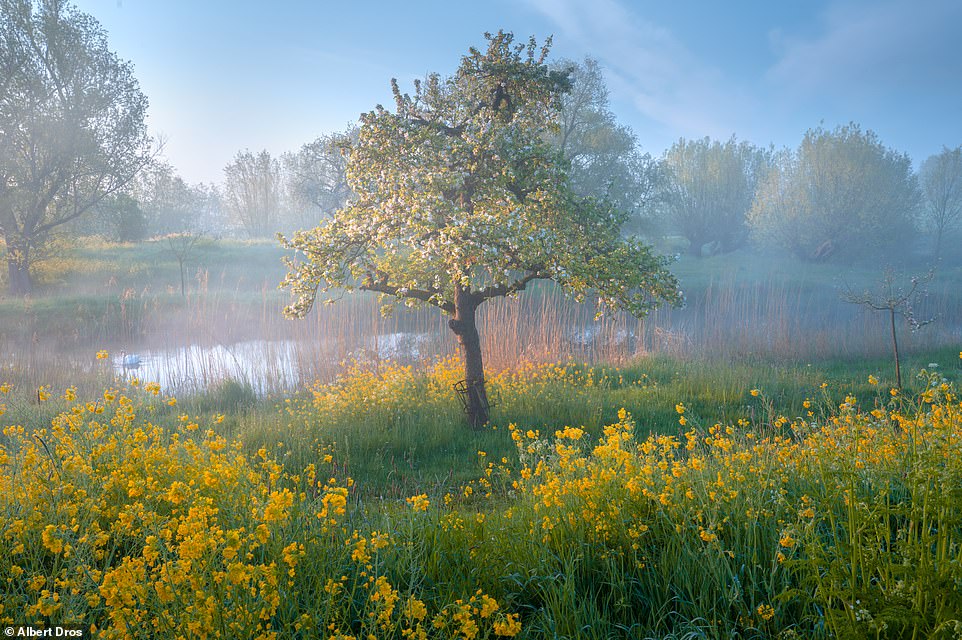 Entitled Tree of Life, this photo is one of Dros’s favourites from his Magical Spring in the Netherlands collection. He said: ‘It’s fairly simple, but just really gives that spring feeling with all of the yellow flowers in the foreground and the blossoming tree in the middle. It almost looks like a painting’ 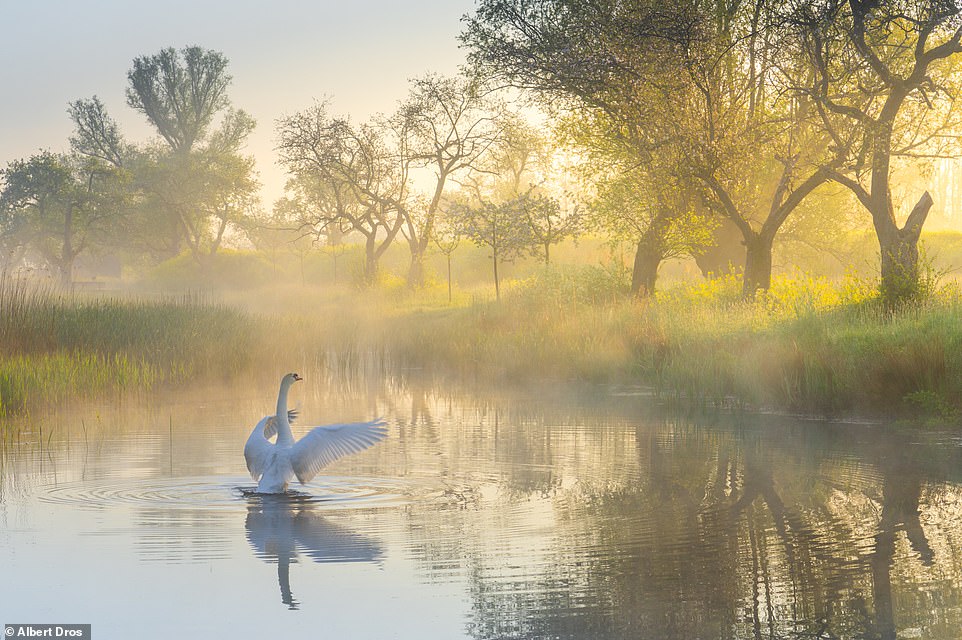 In this heart-warming shot, a swan spreads its wings one early morning. Dros explained how timing is key to the photographs he takes. He said: ‘It’s like a fairy tale, when you’re at the right place at the right time’ 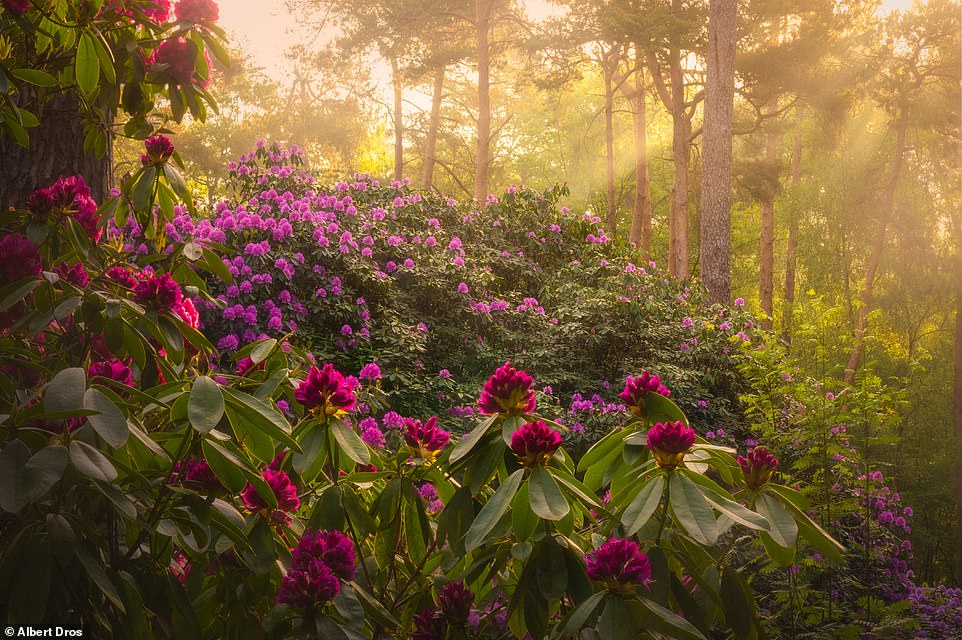 ‘It’s like the country awakens from the winter sleep and transitions into the warmer phase,’ Dros said, talking about how special Holland is in spring 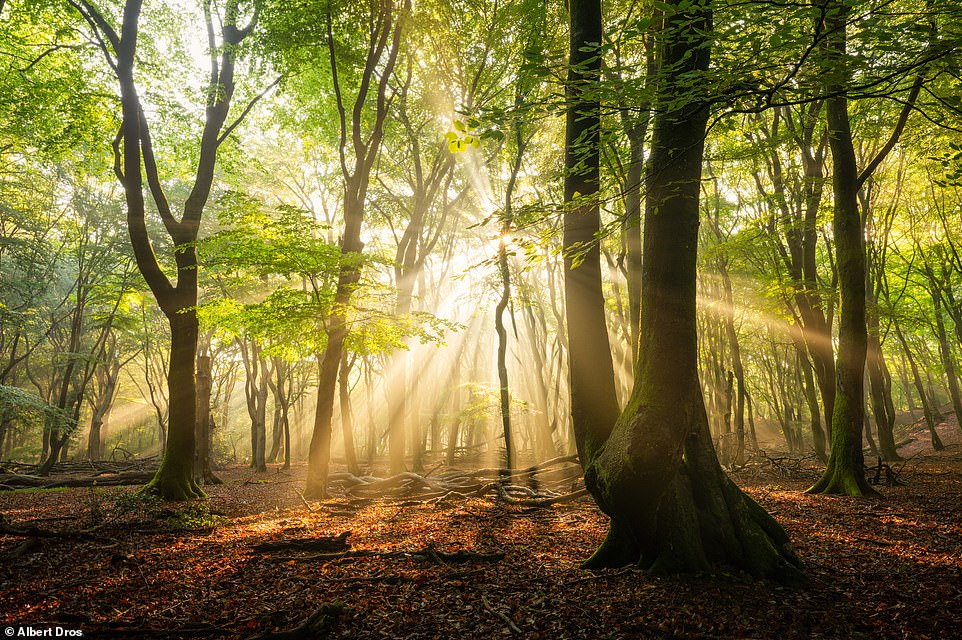 This mesmerising shot shows a forest in the morning light. Dros explained that spring is his favourite time of year in Holland. Although he admitted that autumn comes a close second. He said: ‘In autumn the same forests have so many golden colours’ 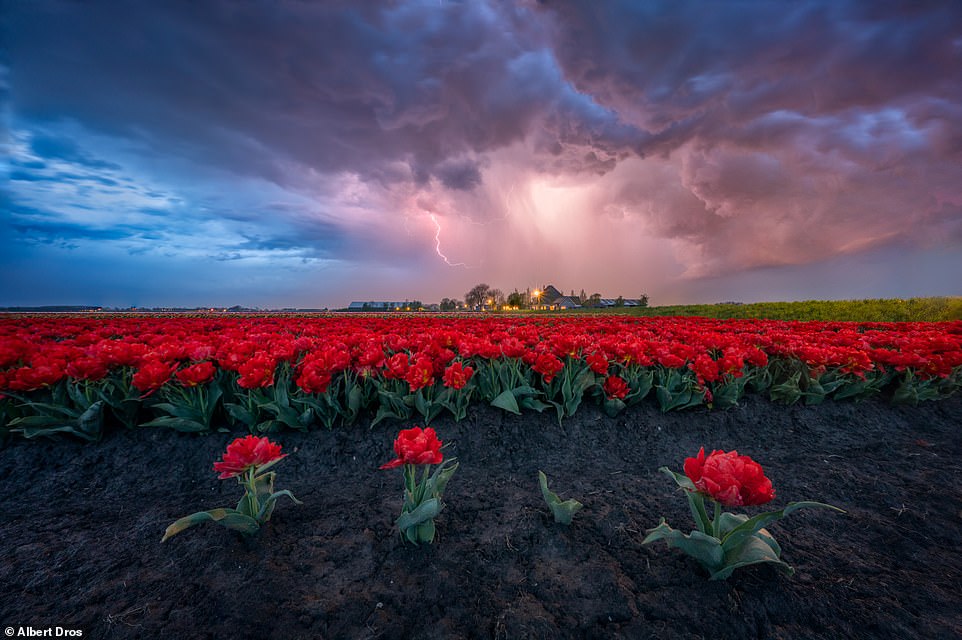 In this striking shot, a dramatic thunder storm rages above a field of red tulips. Dros revealed: ‘I had always wanted to take a shot like this and this year – 2021 – I finally succeeded’ 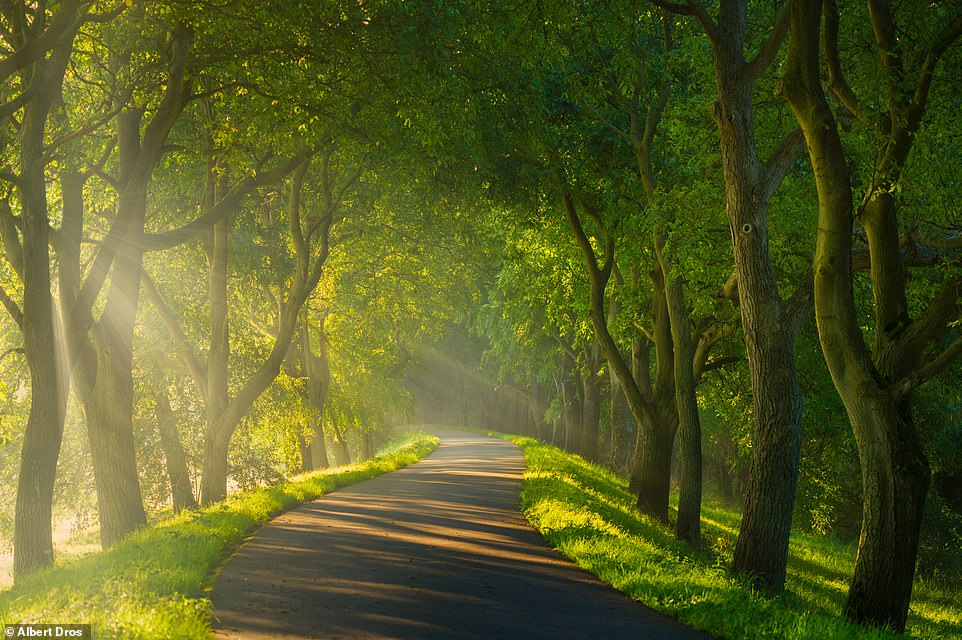 This serene photograph depicts the first sunbeams of the day streaming through trees in a Dutch forest. Dros grew up in a town called Amersfoort, which is close to several national forests 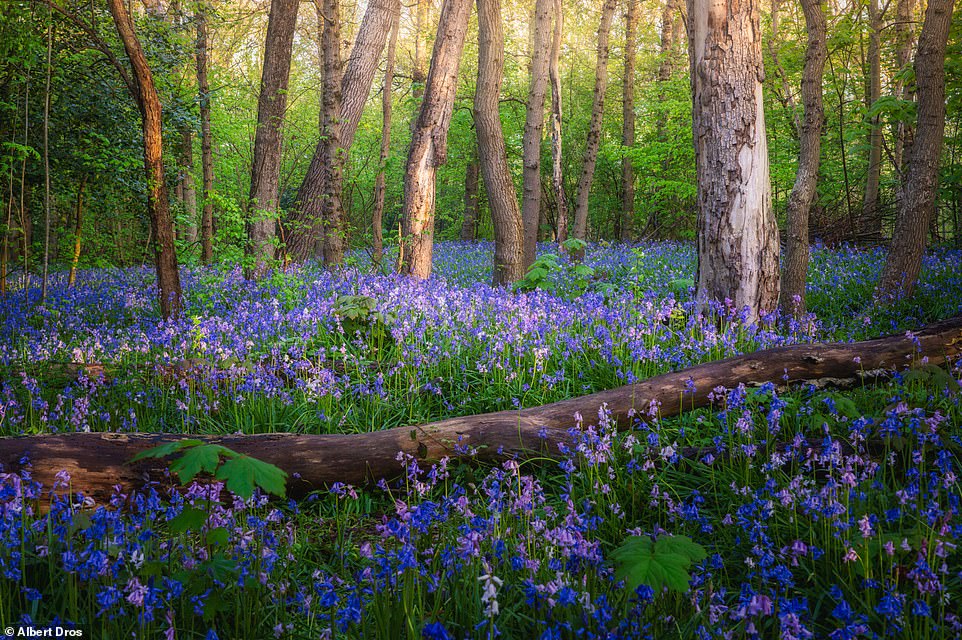 ‘Spring is a magical season, especially in the Netherlands,’ Dros said. ‘There is so much beauty to see and to photograph – our tulip season, the lush greens everywhere, the cute animals, the windmills, and our beautiful forests, some covered with many flowers’ 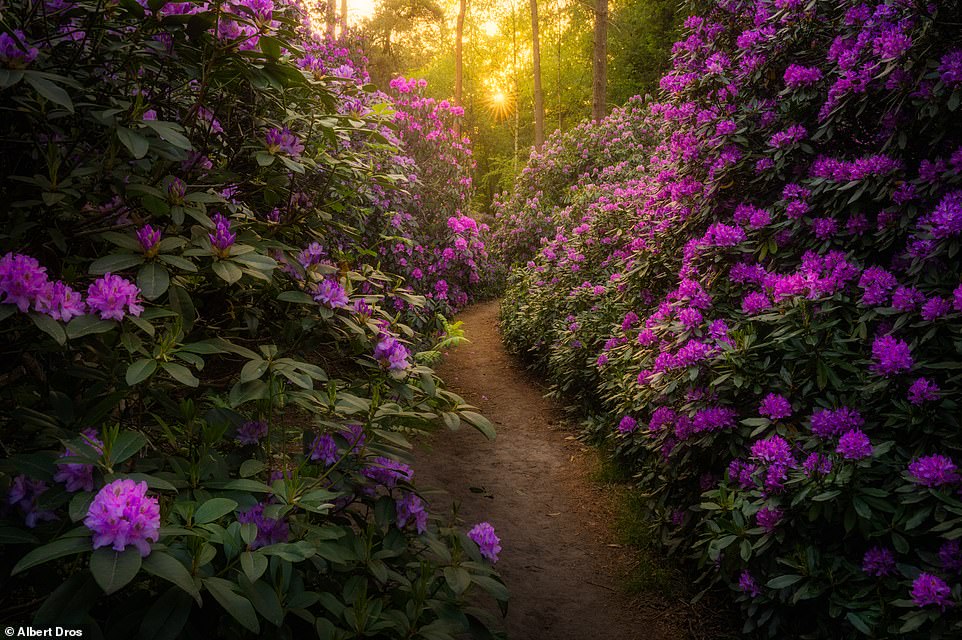 According to Dros, royal purple rhododendrons are a common sight in the forests of Holland in spring. He reveals that they start to bloom in earnest at the end of May 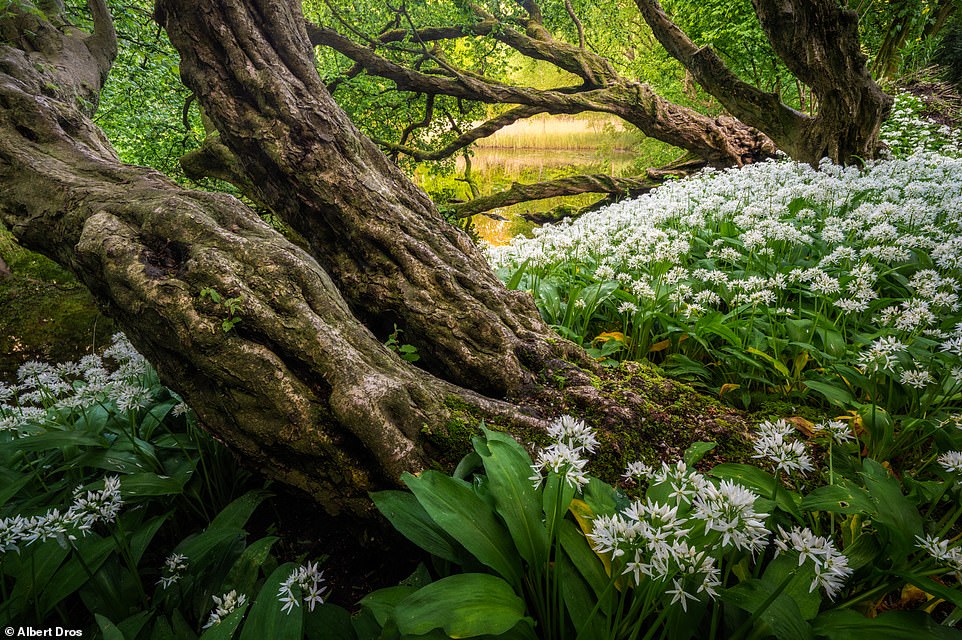 Pictured is a forest floor full of white wild garlic flowers. Dros said: ‘Yes, it really does smell like garlic. But I like it’ 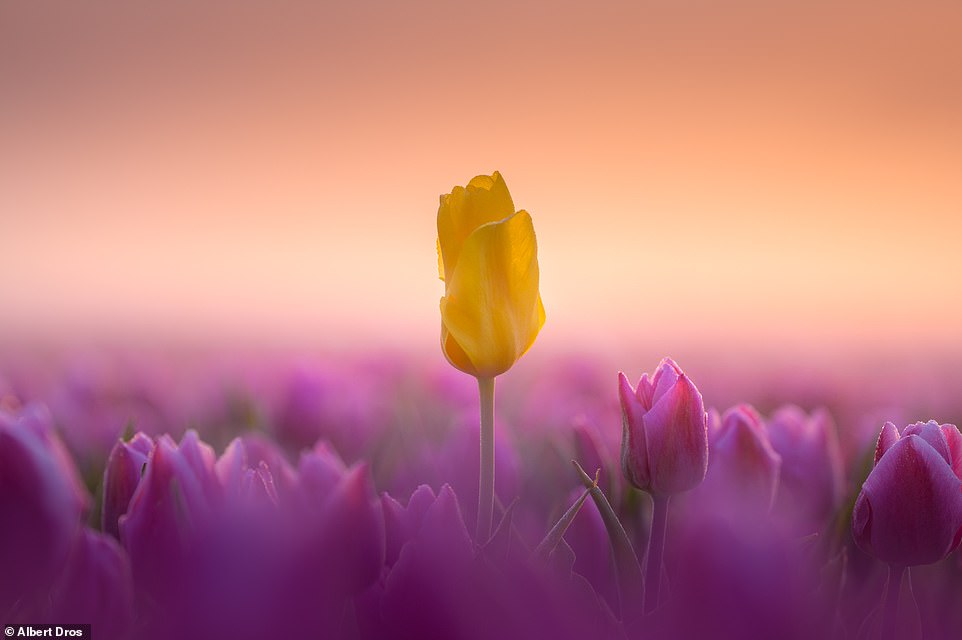 On his blog, Dros reveals that ‘different’ tulips are removed by the growers. However, he said: ‘I find them the most beautiful to photograph’ 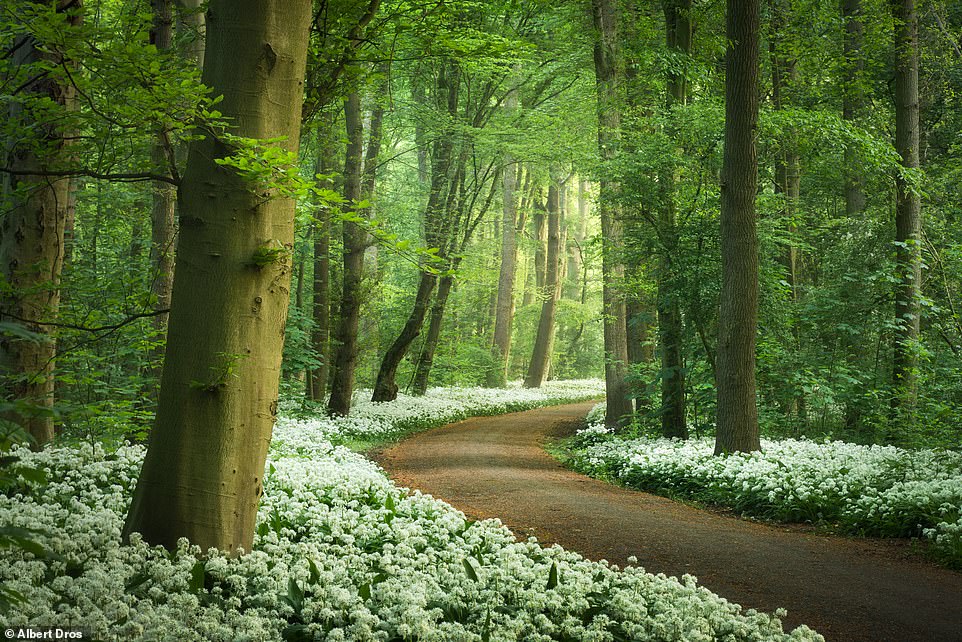 Dros has travelled the world as a photographer. He has taken snaps everywhere from Kyrgyzstan to Dubai. During the pandemic he refocused his attention on his home country, resulting in stunning shots like this springtime forest photo 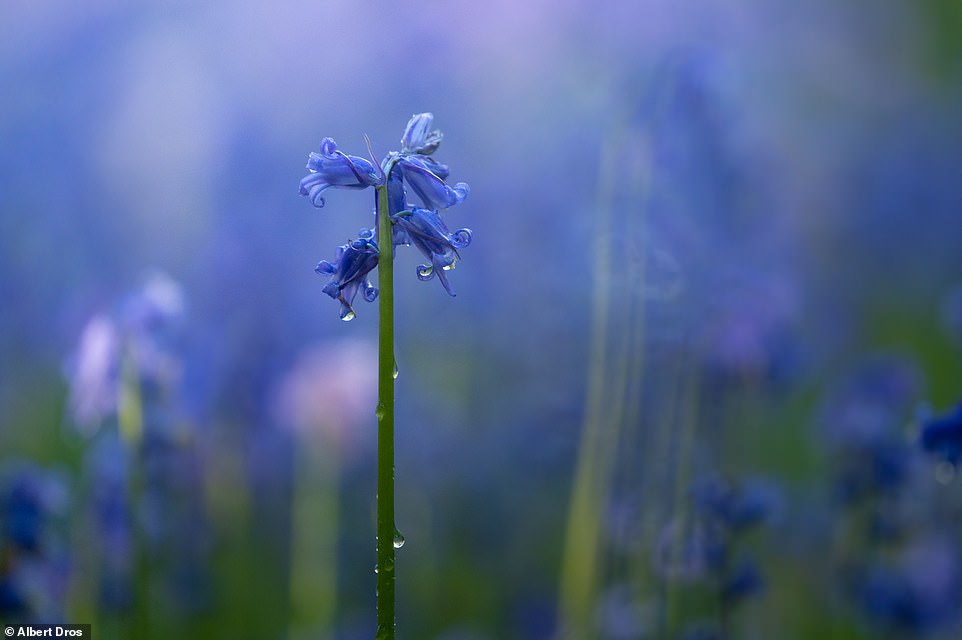 Pictured is a close-up of a hyacinth flower. It took Dros two springs to capture all the images in his Magical Spring in The Netherlands collection 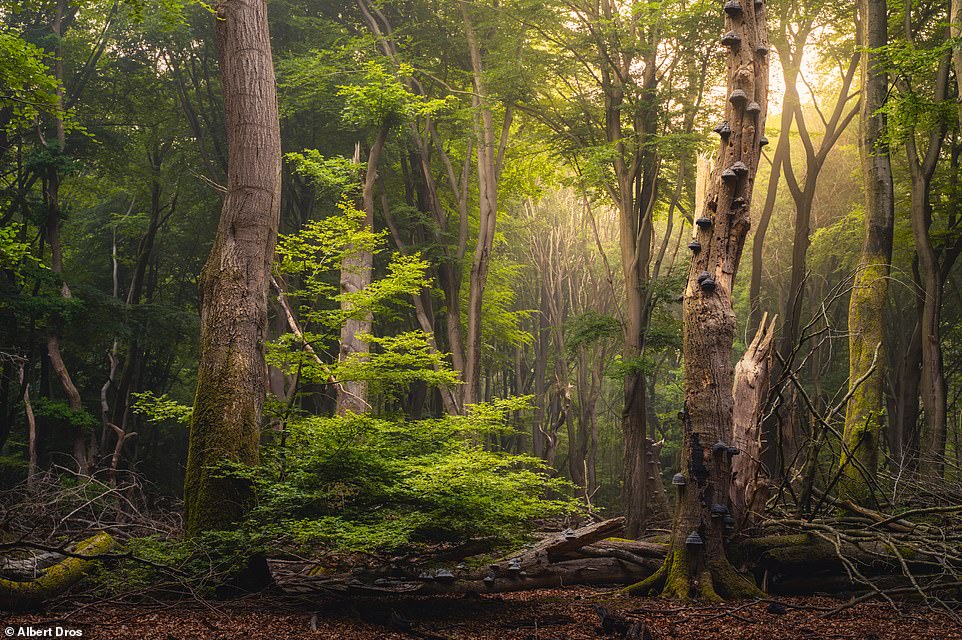 ‘Over the years, I learned to love and appreciate my home country more and more,’ Dros said. ‘The more you are away, the happier you are when you come back’ 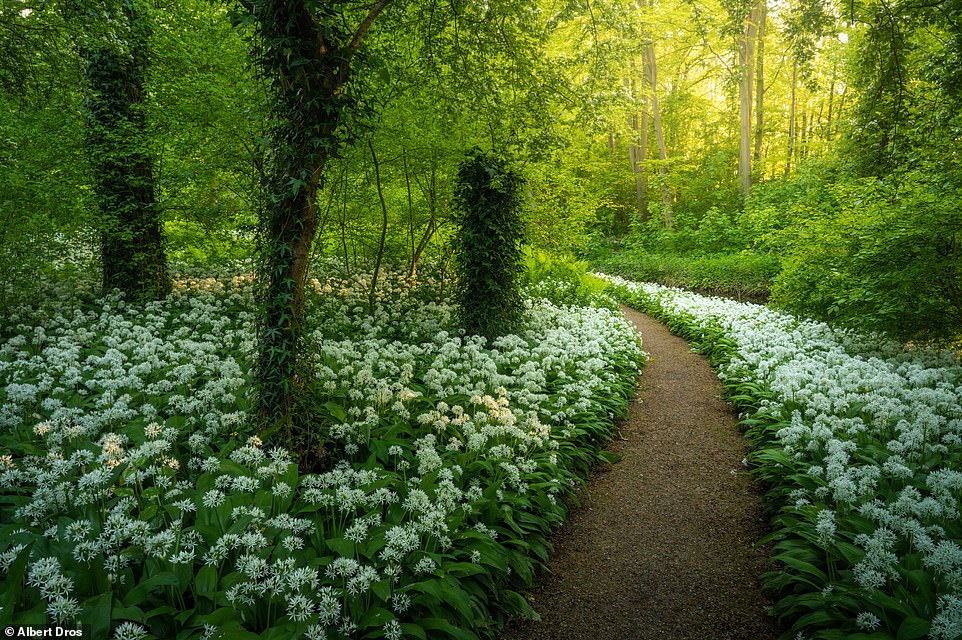 Describing this pretty image, Dros said: ‘Some forest parts look like a jungle with all the greens. An interesting combination with the wild garlic forest floor’

You can find out more about Albert Dros’s work on his website – www.albertdros.com.