The Commissioner of the Met Police has denied parts of London are ‘no go areas’ for police, but admits that locals do sometimes cheers for criminals being tackled by her officers.

Cressida Dick made the comments after shocking footage showed two police officers being kicked and shouted at by a mob as they tackled a suspect in McDonald’s in Hackney, east London.

The Met Police commissioner declined to comment on what happened, but insisted such incidents are rare and most of her officers are supported in their work in the capital. 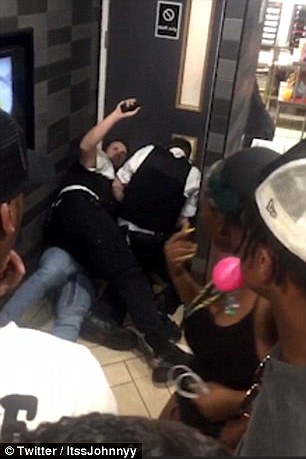 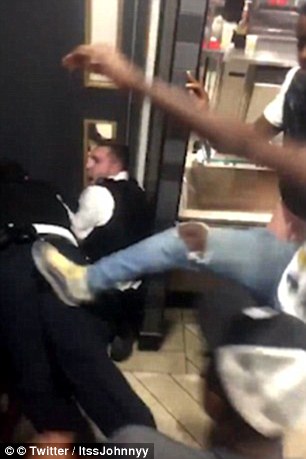 Her comments came after bystanders were filmed shouting at and kicking police trying to tackle a suspect in Hackney, east London

She told Good Morning Britain: ‘It’s completely unacceptable for people to dive in and try to get involved and pull [police officers] off. They are only putting themselves at risk.

‘It’s utterly unacceptable to kick a police officer in any circumstances… people need to give us the benefit of the doubt.’

But she accepted that her officers are sometimes not supported by members of the public as they attempt to arrest suspects.

She added: ‘A couple of weeks ago officers were under enormous attack and were being filmed and people were screaming and shouting and cheering when somebody got away who appears to have had a gun. This is wrong.’

But she added: ‘People I think should understand that most officers, most of the time, don’t encounter that. This isn’t everybody in Hackney.

‘This isn’t the way things are across London. There are no ‘no go areas’. Police officers are able to go about their business very well.’