Detectives have shared pictures of ten people they want to speak to after ‘a minority’ of Black Lives Protesters ‘were intent on behaving violently’.

The Metropolitan Police issued the images following the arrest of 238 people accused of violence during demonstrations across central London.

The appeal for information on 10 individuals today comes in addition to the 60 others, who have been pictured by the Metropolitan Police over the last few weeks.

‘Whilst we acknowledge that the vast majority of people who attended the recent protests – and, who are continuing to protest – in order to make their voices heard, have behaved peacefully, we witnessed a minority who were intent on behaving violently and causing harm.

‘The violence that was directed towards police officers will not be tolerated.’

Police need to ‘identify and speak with’ the people photographed, who mostly appear to be wearing face coverings – four went without any mask whatsoever and one had his mask around his neck.

The photographs were taken using CCTV, body worn video from officers and footage that went viral online over the last couple of weeks.

‘Today, we have issued images of a further 10 people who we need to identify and speak with. And I would again encourage anyone who recognises them to phone police,’ Mr Javid added. 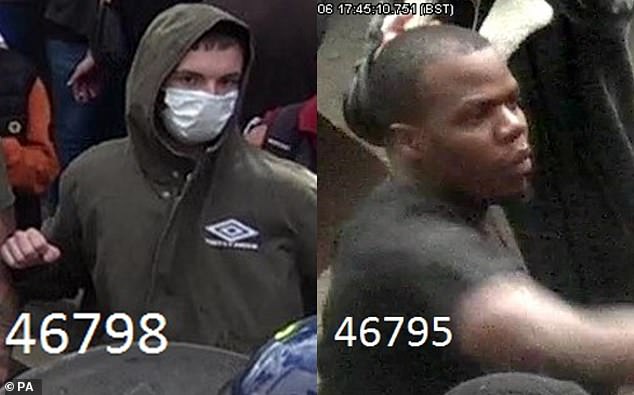 These images are among eight others police are searching for

The force revealed the investigation was ongoing and said more images will be released soon.

It comes after a 28-year-old man was arrested in Essex on suspicion of outraging public decency.

A ‘far-right’ protester was photographed urinating next to the memorial dedicated to PC Palmer, the officer who was stabbed to death in the 2017 terror attack in Westminster.

Armed only with a baton and pepper spray, PC Keith Palmer was stabbed to death by terrorist Khalid Masood on March 22, 2017. He was awarded a posthumous George Medal for his bravery in confronting the killer.

Weeks of protests were sparked across the world by the killing of George Floyd, a black man who died May 25 after a police officer pressed his knee on his neck for nearly nine minutes.

He had been placed under arrest under suspicion of using a counterfeit banknote.

The Prime Minister, who had urged protesters to avoid the demonstrations all together, wrote on Twitter: ‘Racist thuggery has no place on our streets. Anyone attacking the police will be met with full force of the law.

‘These marches and protests have been subverted by violence and breach current guidelines. 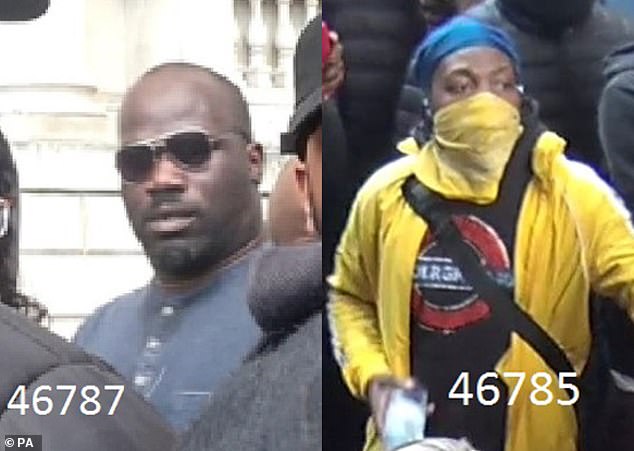 Police need to ‘identify and speak with’ the people photographed, who mostly appear to be wearing face coverings – four went without any mask whatsoever and one had his mask around his neck 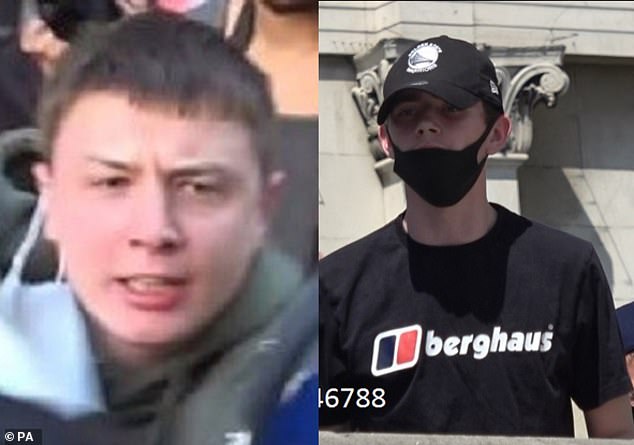 ‘Racism has no part in the UK and we must work together to make that a reality.’

Offences included breach of the peace, violent disorder, assault on officers, possession of an offensive weapon, possession of class A drugs, and drunk and disorder.

In a statement at the time, Mr Javid said: ‘Thousands have travelled to London despite being asked not to and some of those have been intent on causing harm.

‘We understand why people want to express their concerns and have worked hard to keep people safe.

‘Many people have complied with these conditions, and have listened to officers during the day, and have behaved as we have requested in order to keep them safe. 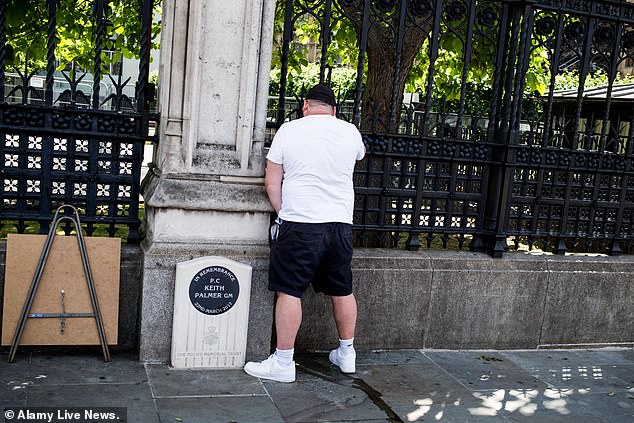 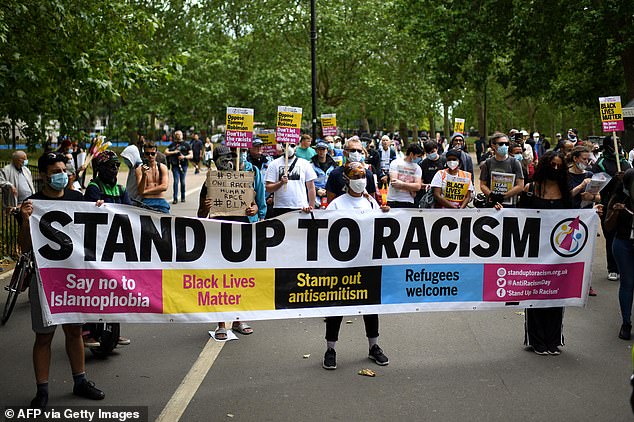 ‘A number of people have not followed these conditions, putting officers, and others’ safety at risk.

‘There have been pockets of violence directed towards our officers. This is completely unacceptable and I condemn those involved.’

Statues and monuments to controversial figures from Britain’s imperial past have become the focal point of many demonstrations since a statue of 17th century slave trader Edward Colston was torn down in Bristol and dumped in the harbour. 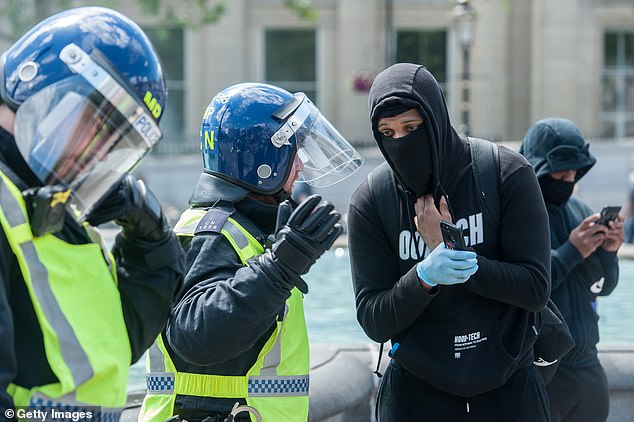 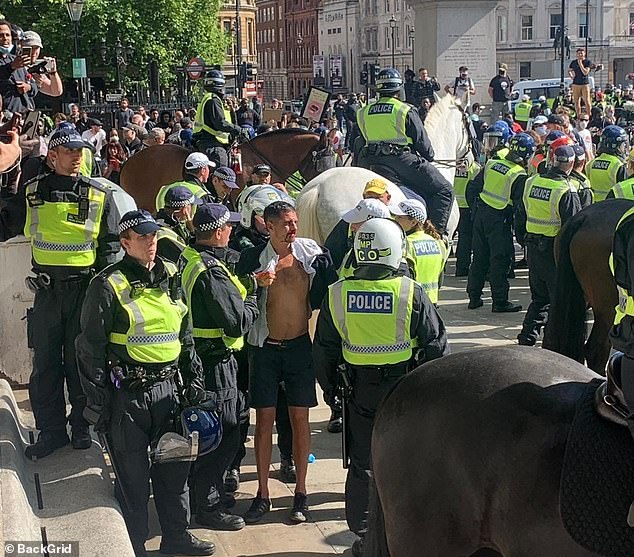 The Home Secretary tweeted a video of the affray and wrote: ‘Throughly (sic) unacceptable thuggery. Any perpetrators of violence or vandalism should expect to face the full force of the law.

‘Violence towards our police officers will not be tolerated. Coronavirus remains a threat to us all. Go home to stop the spread of this virus and save lives.’

Mayor of London Sadiq Khan wrote on Twitter: ‘Millions of Londoners will have been disgusted by the shameful scenes of violence, desecration and racism displayed by the right-wing extremists who gathered in our city today.

‘In the face of attacks and abuse, our police did a fantastic job to control the situation. Thank you.’

Labour leader Sir Keir Starmer said the violence shown towards the police had been ‘completely unacceptable’.

He tweeted: ‘Any violence against our police is completely unacceptable. No ifs, no buts.

‘Today’s protests in London were led by those intent on causing violence and sowing hate for their own ends. We must not let them win.’