Britain’s biggest police force is promising to crackdown on speeding motorists who are abusing the clearer roads during the coronavirus lockdown.

It comes as road safety chiefs claim average speeds on some roads have increased by as much as 50 per cent during lockdown.

One driver was even caught travelling at 151mph on the M1 in London.

Now a special task force is being set up by the Metropolitan Police to tackle speeding motorists in the capital.

Det Supt Andy Cox, who is heading the unit, told the Daily Telegraph that speeding was on the rise due to a combination of ‘extreme speeders’ and other drivers thinking they could get away with going faster on emptier roads.

The Metropolitan Police claim average speeds on some roads have increased by as much as 50 per cent during lockdown. Pictured: A police officer using a hand-held speed gun (library image)

He said: ‘In some roads where we have checks, the average speed has increased by more than 50 per cent and one 20mph road is averaging 40mph.

‘When we stop the drivers, they say it is the clear roads and that they didn’t expect us to be there because they thought we would be engaged with coronavirus-related issues.

‘Such behaviour is totally unacceptable and increases the chances of a serious collision.’

Figures, from the Met Police and reported in the Daily Telegraph, show the maximum speed recorded in a 20mph zone was 73mph, while one driver was caught speeding at 151mph on the M1 before getting out of the car and fleeing on foot.

Data released earlier this month that London has higher traffic levels than other major European capitals – indicating that motorists are still making unnecessary journeys despite the lockdown. 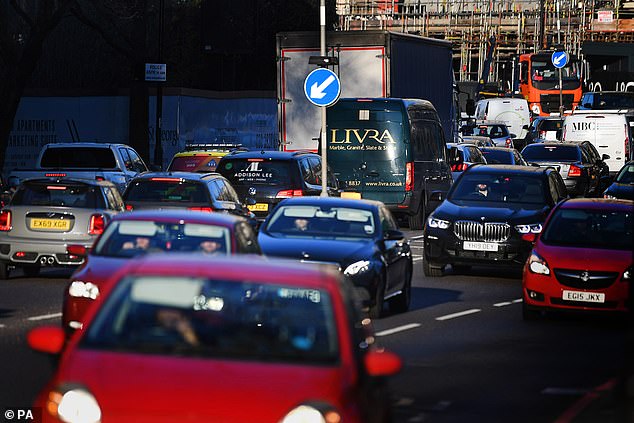 Data from TomTom found that 20 per cent of London’s roads were congested on average between Monday to Friday in the last week of March, against the usual figure of 40 per cent. Pictured: Traffic congestion is still a problem in some roads in London

The analysis, conducted by the Financial Times, using figures Netherlands-based traffic data firm TomTom, found that 20 per cent of London’s roads were congested on average between Monday to Friday in the last week of March, against the usual figure of 40 per cent.

Separately, the Road Safety Analysis group has found traffic on A roads in South East England fell by 56 per cent by the end of March compared with a week earlier.

But it also discovered that average speeds have gone up by at least 10 per cent over the last two weeks on March, amid concerns drivers are breaking restrictions on empty roads.