Four bakers who became trapped in their bakery for two days following Hurricane Harvey made hundreds of loaves to give to flood victims.

Workers at the El Bolillo Bakery in Houston, Texas, had been working the night shift on Friday when they realized they couldn’t leave the shop because of the rising floodwater.

Determined to do their bit, they worked through the weekend to help those affected by Tropical Depression Harvey which has so far killed at least 35 people and forced 32,000 people into shelters.

The Mexican bakery had not been cut off from electricity so they were able to work round the clock.

‘Hurricane Harvey pan dulce we are going to take to those in need. Bakers were stuck inside for two days!’ the bakery wrote on its Facebook page on Monday.

The shop had closed over the weekend but reopened on Tuesday.

Brian Alvarado, the manager of the shop, told The Independent: ‘When they realised they were stuck, they decided to keep themselves busy and help the community and made as many loaves of bread as they could.

‘By the time the owner managed to get to them, they had made so much bread that we took the loaves to loads of emergency centres across the city for people affected by the floods. 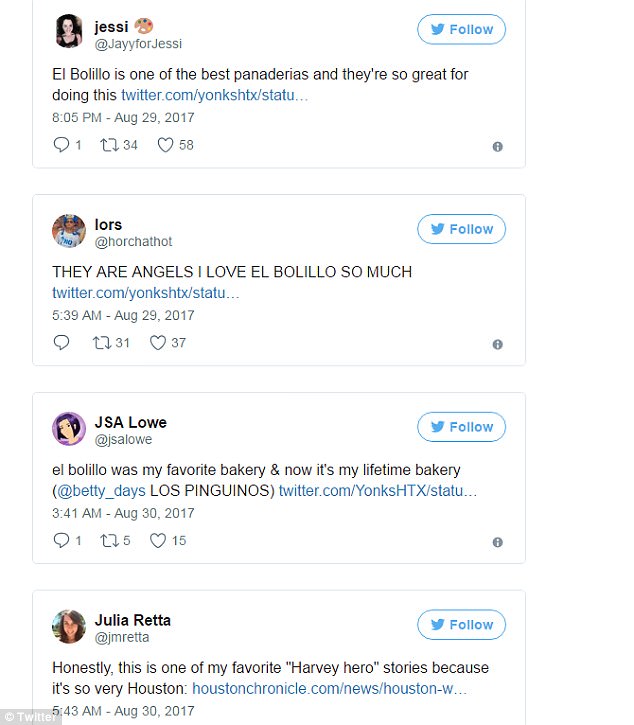 People were quick to praise the bakers for their charitable act.

Mary Carlisle wrote on Facebook: ‘No one had to ask them to help out. They just automatically knew they wanted to help out others in need. Wonderful story. Thank you so much.’

‘You shared so much love to those who desperately needed it,’ Mikie Barton said. ‘Thank you to you wonderful bakers for sharing your wonderful talents with those who need caring so much right now.’

Irma Reyna added: ‘These people are as sweet as their baking. Thanks!’

Diane Pugh said: ‘God Bless you. I was brought to tears by your kindness. Too little of that, today! Just amazing!’

The storm is predicted to be one of the most expensive natural disasters in U.S. history and presents the administration of U.S. President Donald Trump with massive humanitarian and rebuilding challenges.

Harvey weakened as it moved inland over Louisiana on Thursday, leaving behind record flooding that drove tens of thousands from their homes in Texas.

The death toll was rising as bodies were found in receding waters.

A new threat today came from explosions at a flood-hit chemical plant in Crosby, 30 miles northeast of Houston.