On his way to California to inspect border-wall prototypes, Donald Trump promoted a study that purports to show the project’s net cost could be zero dollars

‘According to the Center for Immigration Studies, the $18 billion wall will pay for itself by curbing the importation of crime, drugs and illegal immigrants who tend to go on the federal dole,’ he tweeted, citing a Fox News Channel article about the right-leaning group’s work.

Fox’s summary said the border wall could ‘pay for itself by cutting welfare to illegal immigrants.’

Eladio Sanchez is unimpressed by the eight border wall prototypes looming over his house in Tijuana, Mexico, almost within spitting distance of where U.S. President Donald Trump will visit Tuesday.

At age 30, he has already snuck over the border several times, and doesn’t expect Trump’s wall will have much effect on undocumented migrants like him.

Pointing to the only prototype with an angular barrier at the top – a concrete structure built by Texas Sterling Construction Company – Sanchez says that one might slow him down a little more than the others.

But, he told AFP, ‘you can get over it anyway.’

‘It’s just a little more complicated. But people are always looking for a way to get over – out of necessity, not because we want to.’

A man jogs on the Mexican side of the Mexico-U.S. border in Tijuana, from where prototypes of the wall that US President Donald Trump wants to build are visible 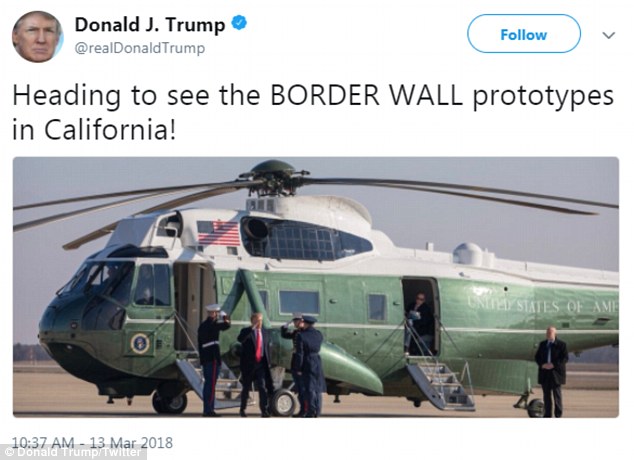 President Donald Trump headed to California on Tuesday, and part of his itinerary will include a stop to inspect a group of border-wall prototypes that have gone up near the border between San Diego and Tijuana 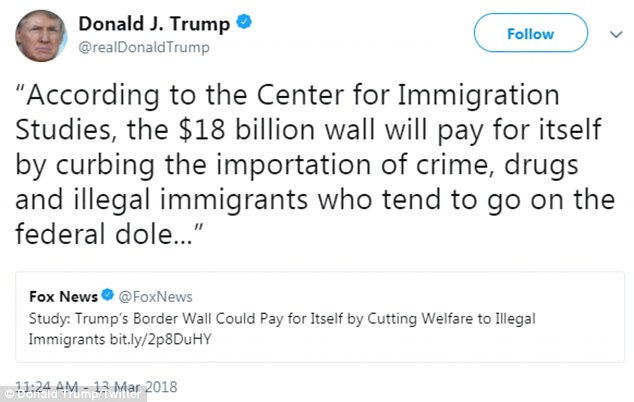 In Tijuana, Trump’s visit to the prototypes looks like just the latest slap in the face from a man who launched his presidential campaign calling Mexican immigrants ‘criminals’ and ‘rapists’ and has since driven US-Mexican relations to their lowest point in recent memory.

It’s as if ‘he wants to come just to tell us he’s here, that he’s going to do what he promised with the wall,’ says Sanchez, who lives in a small gray house in a poor neighborhood that juts up against the border, across from Otay Mesa, on the outskirts of San Diego.

Sanchez has watched the barrier between the United States and Mexico grow over the years, blocking his view of the mountains more every time.

It started with a fence built during the Bill Clinton administration, then was beefed up with barbed wire.

‘They just keep adding more, making it taller,’ he said from his rooftop. 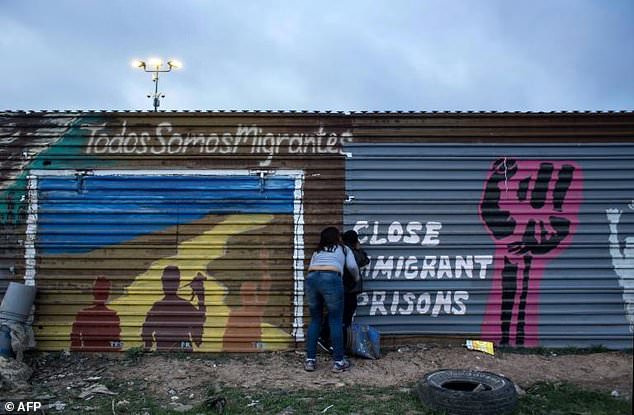 The Mexican side of existing border barriers, including miles of corrugated steel, are painted with slogans and artwork defending illegal immigrants who cross into the U.S.

If Trump gets his way, whichever prototype or prototypes win will snake across much of the nearly 2,000-mile border.

The cost is estimated at up to $20 billion. Trump’s insistence that Mexico will foot the bill is a source of national outrage.

Mexican President Enrique Pena Nieto reportedly canceled plans for a visit to Washington recently over the issue — the second time he has done so.

‘He firmly repeated what all Mexicans have always said: We will never pay for a wall on the border,’ said Foreign Minister Luis Videgaray.

An estimated 11 million undocumented immigrants live in the United States, many of them Mexicans or other Latinos.

‘They are the proof that it’s possible to get through. More Mexicans are getting through all the time,’ says Sergio Tamai, the founder of immigrant advocacy group Angels Without Borders.

Tamai runs a shelter for migrants in the border city of Mexicali, which sits across from Calexico, California. 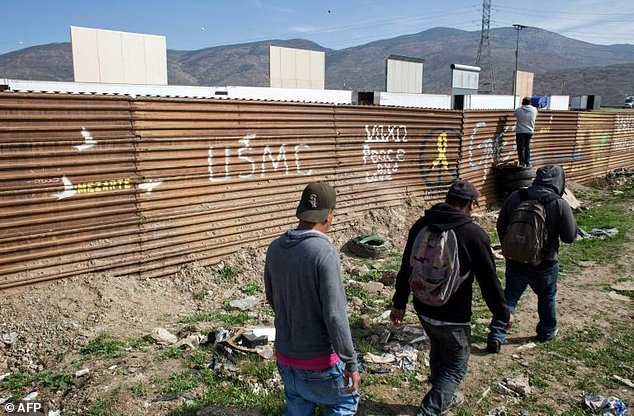 The Migrant Hotel, as it’s known, is not far from the rusted metal border fence that separates the two cities. On the Mexican side, the fence is covered in colorful graffiti, including the words ‘penetrate me’ in giant letters.

‘The desert. The mountains. Human traffickers. You can’t take away that desire to cross to the other side. That desire to build a better life for your family is such a strong, powerful energy.’

For many Mexicans who have been deported from the United States, things have gone from bad to worse under Trump.

‘Everything is more difficult with Trump. He’s really racist,’ says Carmelo Alfaro, 56, sitting on a mattress on the floor in the Migrant Hotel.

He was deported recently after working for 15 years as a gardener in San Francisco.

He now plans to move back ‘all alone’ to his native state of Jalisco, in the west, and says he is resigned to living the rest of his life without his three US-born children. He and his wife decided they would be better off in the United States.

Salvador Moreno, the elderly deportee who cleans the hotel, is more optimistic.

A native of the western state of Michoacan, he was deported from California two years ago, and has since tried to go back twice. Both times he was arrested by the US border patrol.