And the 21-year-old showcased her show-stopping figure in a stunning canary yellow bikini on holidays in Port Douglas, Queensland over the weekend.

Mia took to Instagram to show-off her tanned and toned figure in the swimwear as she sat on a tree stump.

Glamazon: Mia Fevola, 21, (pictured) flaunted figure in a canary yellow bikini on Instagram on Monday, after revealing the misogynistic abuse she faces for dating another AFL star

She showcased her flat stomach along with toned thighs as she sat next to the picturesque beach.

Mia’s brunette tresses appeared to be lifted by a light breeze. 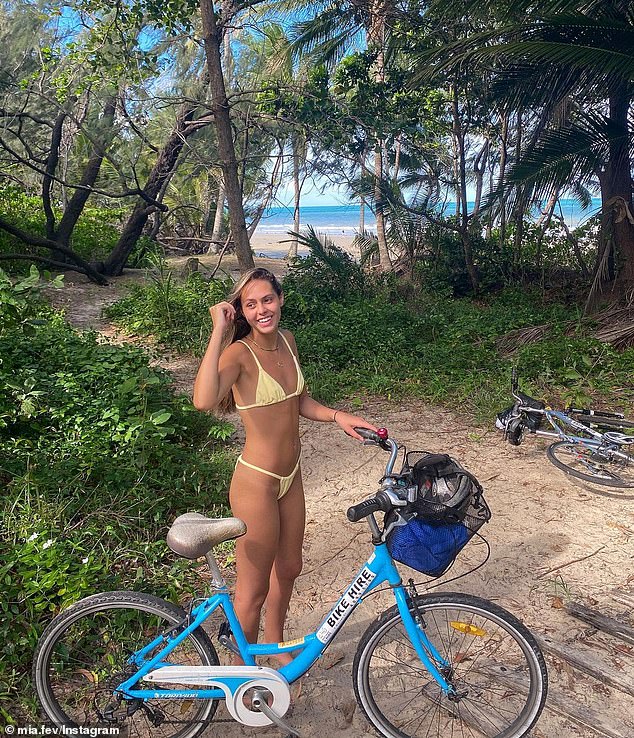 Subjected to online abuse: Mia revealed the misogynistic abuse she faces daily for dating another AFL footballer earlier this month

It comes after Mia revealed the misogynistic abuse she faces from Instagram trolls on a daily basis.

Mia, who is the stepdaughter of Carlton legend Brendan Fevola, shared examples of the vile comments she receives in an Instagram Stories this month. 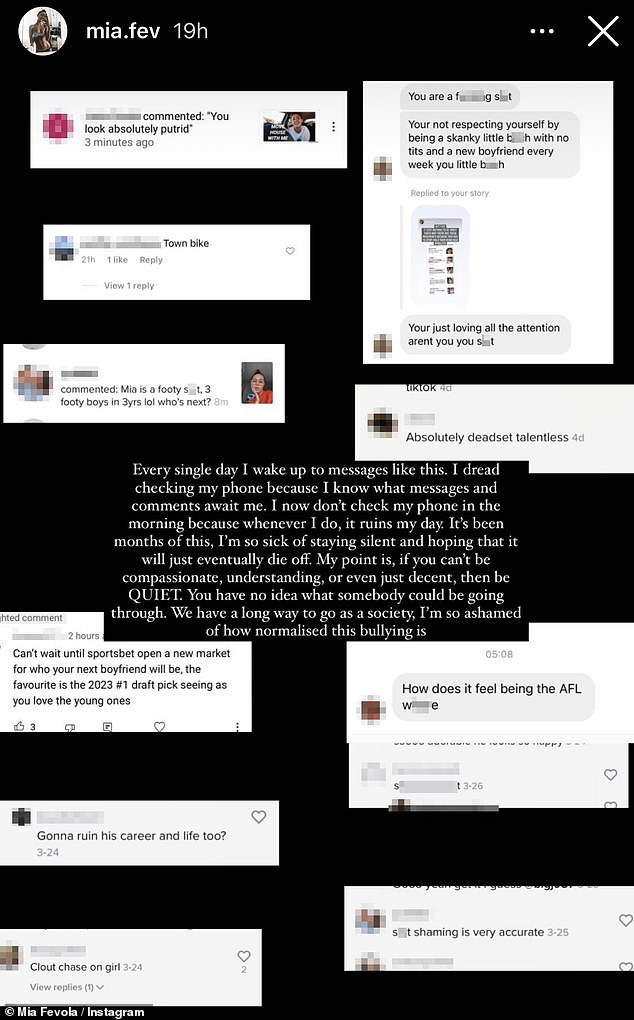 Abuse: Mia shared examples of the sl*t-shaming comments she receives from trolls  in an Instagram Stories post this month

She said she’s ‘sick of staying silent’ and is ‘ashamed’ at how ‘normalised’ bullying is.

‘Every single day I wake up to messages like this. I dread checking my phone because I know what messages and comments await me,’ she said.

‘I now don’t check my phone in the morning because whenever I do, it ruins my day. It’s been months of this. I’m so sick of staying silent and hoping that it will just eventually die off.’ 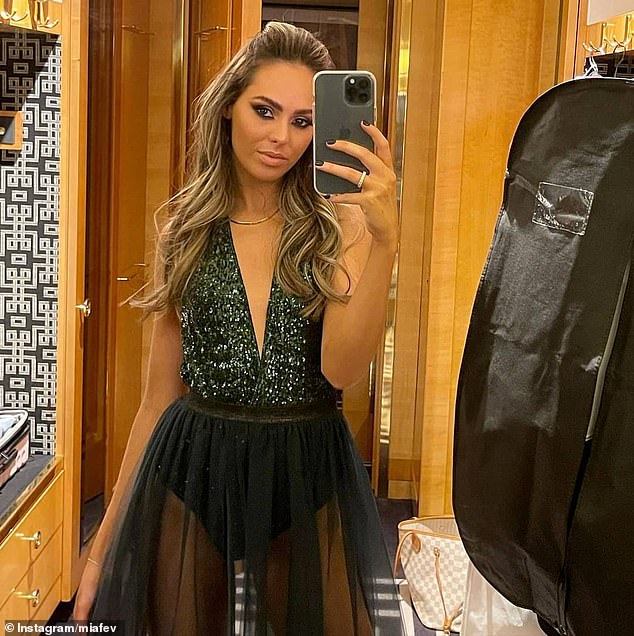 Had enough: ‘It’s been months of this, I’m so sick of staying silent and hoping that it will just eventually die off,’ the model said. Mia then urged the trolls to be ‘quiet’ if they have nothing positive to say, and said she is ‘so ashamed’ at how ‘normalised this bullying is’

Mia urged the trolls to be ‘quiet’ if they have nothing positive to say.

The Melbourne-based star shared a collage of examples of the sl*t-shaming comments she has received since debuting her romance with Jamarra in March.

That same month, her stepdad Brendan unleashed on his Fifi, Fev and Nick radio show, saying it hurt him deeply to read what trolls were saying about Mia. 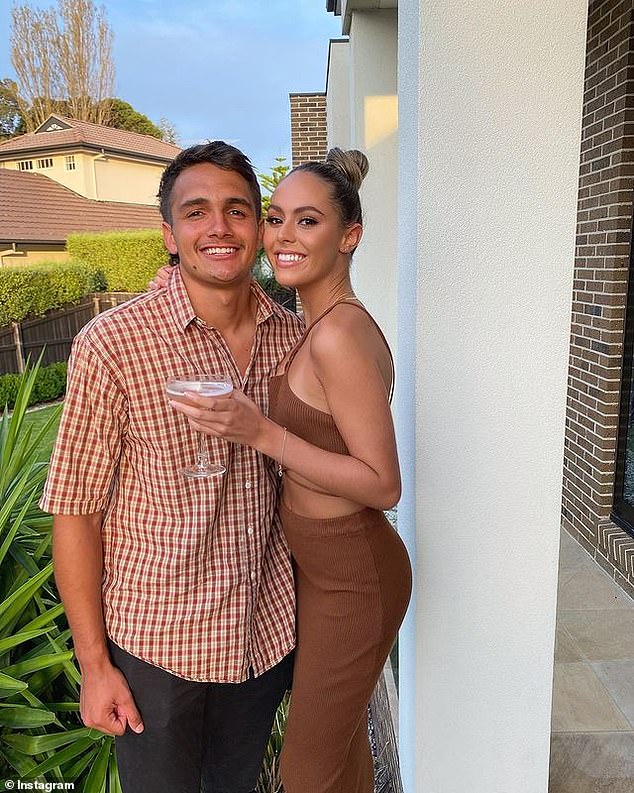 ‘As a father, that hurts. That hurts me that they think that of Mia,’ he said.

Brendan, 40, later pointed out the trolls’ sexist double standards, saying: ‘Blokes can do whatever they want. They can date girls and no one judges them. It’s a lad thing.’ 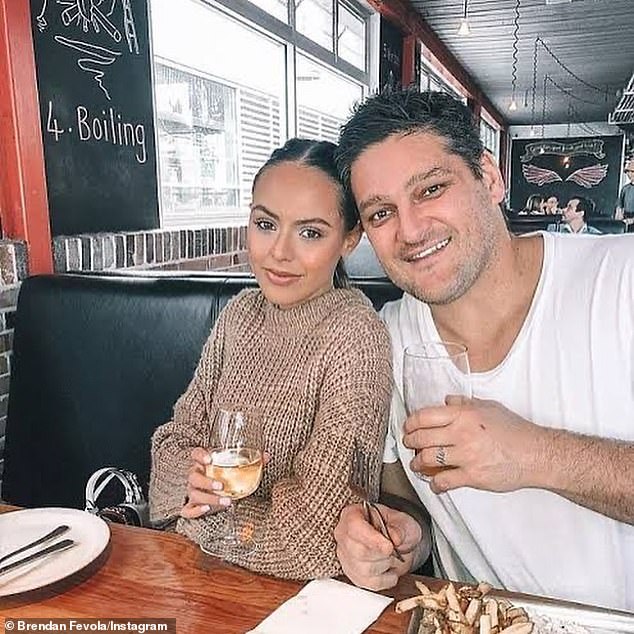 ‘Mia’s been with a couple of football players. That’s okay. People date tradies. That’s their profession,’ he added.

‘Now she’s met this other guy, Jamarra. Great kid. Young boy. And they started dating before he even started playing football. He wasn’t drafted at all.’

Mia is the eldest child of Brendan’s long-time partner, Alex.

Brendan adopted Mia as his own daughter when he married Alex in 2005, and they remained close even during times when the couple were separated. 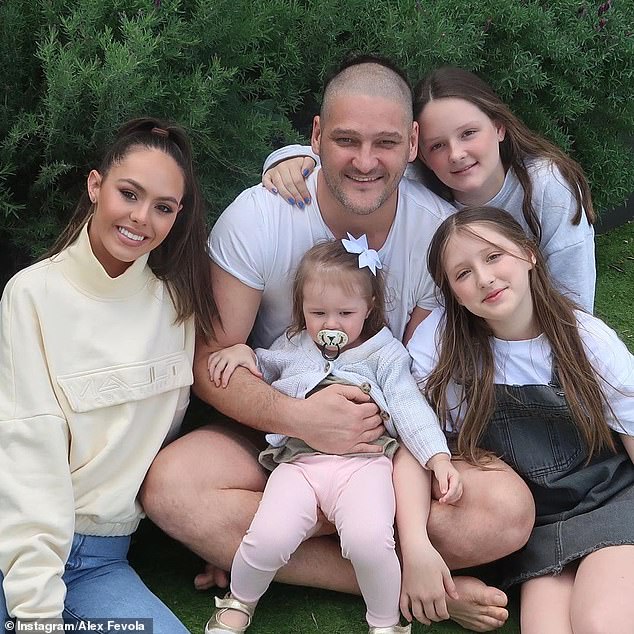