Florida Governor Ron DeSantis has announced that stores, restaurants and other non-essential businesses in Miami can begin to open at 50 percent capacity from Monday.

During a press conference Thursday, he approved Miami-Dade and Broward counties to enter into phase one of the state’s reopening process.

They were the last two counties in the state to remain completely shuttered up under coronavirus lockdown measures.

Beaches in the south Florida region will remain closed until at least Memorial Day on May 26, however, and will not reopen until all counties in the area are ready to do so.

Broward County Mayor Dale Holness was heckled by a protester calling for beach reopenings as his made the announcement.

Florida Governor Ron DeSantis speaking during a press conference on Thursday in which he announced that stores, restaurants and other non-essential businesses in Miami-Dade and Broward counties can begin to open at 50 percent capacity from Monday, May 18 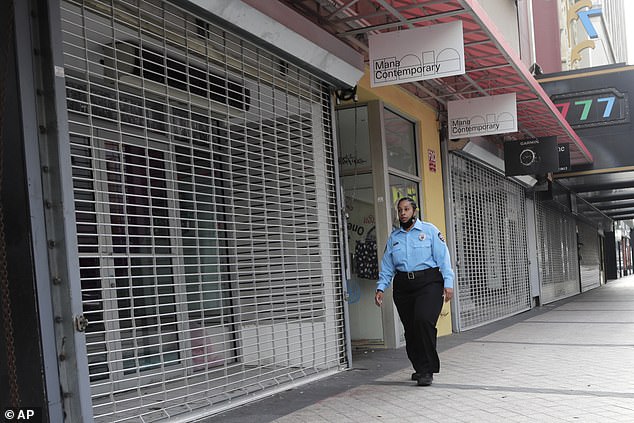 A security guard walks past shuttered businesses  in Miami on May 7 during the coronavirus pandemic. Miami-Dade was among the last two counties to remain completely closed until Gov. DeSantis on Thursday announced it is entering reopening phase one from Monday

‘Miami-Dade and Broward have both submitted plans that I’ve approved,’ DeSantis said during Thursday’s press conference, announcing that the counties will enter phase one of reopening from May 18.

‘Today we take another important step for a very important part of the state of Florida.’

The 50 percent limit on capacity in Miami-Dade is twice the statewide restriction which is at 25 percent capacity.

Other counties could begin reopening ten days ago but the outbreak in Miami-Dade and Broward was considered to severe to end lockdown at the time.

Miami-Dade Mayor Carlos Gimenez pushed for the capacity to be extended to 50 percent, on Wednesday releasing a detailed draft of the county’s reopening plan which outlined the difficulties that businesses will have in recovering after two months of closures.

Owners said they could not operate on at 25 to 30 percent capacity.

Costs would remain too high, social distancing in venues would remain difficult and a closure caused by another outbreak would be crippling, they said.

The mayor mentioned potentially opening the city’s restaurants in three stages during a call with some of NYC’s top independent restaurants, according to Eater.

The staged approach would not result in a full reopening until after Labor Day.

No specific outline or days were given but it was implied that restaurants would begin to open in a limited capacity, as they are in other states.

Owners have voiced concerned that they will still incur heavy costs to operate at limited capacity, making reopening worthless.

Gimenez added that the new openings will also not include spas, bars, gyms, movie theaters, bowling alleys or massage parlors.

As well as implementing a limit on store capacities, the plan outlines how businesses must eliminate the use of water fountains and clean bathrooms and elevators every two to three hours.

Visitors and employees in office buildings will also be required to wear masks ‘while in the building,’ the rules said.

While the order may take effect on Monday, reopening will also be staggered with many businesses allowed to reopen from May 20 and restaurants about a week later.

Gimenez added that if there is a further spike in coronavirus cases, the county may have to return to stricter restrictions.

‘We’re now ready to start revitalizing our economy,’ he said.

Broward county will have many of the same restrictions from Monday onward as Miami-Dade but will also allow gyms within homeowners’ associations and apartment complexes to begin a limited opening.

‘It’s going to be a long hard haul to revive the economy to where it was before,’ Mayor Holness said before announcing that mayors in the south Florida region had agreed to keep beach closed until Memorial Day at the earliest.

‘It’s best that we do it together as a section,’ he said.

‘If we open one and not the other than we’ll have a crowd travel and get back to where we were.’ 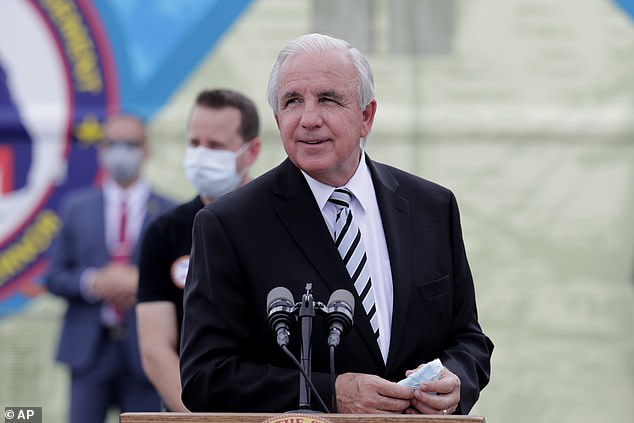 Miami-Dade County Mayor Carlos Gimenez speaking during a press conference. The mayor said Thursday ‘we’re now ready to start revitalizing our economy’ as officials announced that Miami-Dade would allow for bars and restaurants to open at 50% capacity from Monday

Gov. DeSantis said that the plans submitted by both counties were different, but he had approved them both because of the level of progress made in cutting down new cases of coronavirus.

‘They are not going to have the exact same approaches … but they are collaborating and coordinating,’ he added.

They have ‘progressed nicely in dealing with the epidemic’, he said.

Diners in Washington State will have their email, phone number and where they sat logged and kept for 30 days to help contact tracing

Restaurants in the eight Washington counties approved to move into phase two of the reopening plan will be required to keep a log of their customers to remain open.

Eateries are being directed to log all eat-in customers to help with contact tracing, Governor Jay Inslee said.

Restaurants will be required to log each person’s telephone number, email address and the time they ate, and the record must be maintained for 30 days, according to ABC News.

Other requirements include operating at 50 percent capacity or below, seating no more than five guests at each table, placing tables at least six feet apart from each other, and providing single-use menus.

‘The trends have been positive; the work has been effective.’

The governor said that he would make a further announcement on Friday regarding the other 64 counties in Florida.

The move to reopen Miami-Dade and Broward was not welcomed by all businesses with some saying they were not yet ready to commit to an opening date.

A spokesperson for the Seminole Hard Rock Hotel & Casino told the Sun Sentinel that it will not open Monday ‘because it’s quite a complicated process’.

‘You can’t just open an operation like that on a dime and you really want to do it right,’ said Gary Bitner.

Simon Property Group, which owns Coral Square mall in Coral Springs, and Stranahan House museum in Fort Lauderdale also said they would not reopen Monday as they review their policies to keep guests safe.

The Vice Mayor of Fort Lauderdale, which is in Broward County, voiced a concern about a further spike in cases if masks aren’t worn or social distancing guidelines are not maintained.

‘We need to do that, or this is going to be a catastrophe,’ said Steve Glassman.

‘I get calls daily from people behaving badly. People line up outside bars and restaurants. They hang out, they congregate. Not wearing masks or maintaining social distancing.’

As of Thursday the Sunshine State has more than 43,000 confirmed cases of COVID-19 and 1,875 deaths from the disease since the first cases were reported in early March.

The news of the extended reopening in Florida came as new information emerged on the policies being implemented in other states to ensure that customers and staff are safe from the spread of coronavirus once shutdowns are lifted. 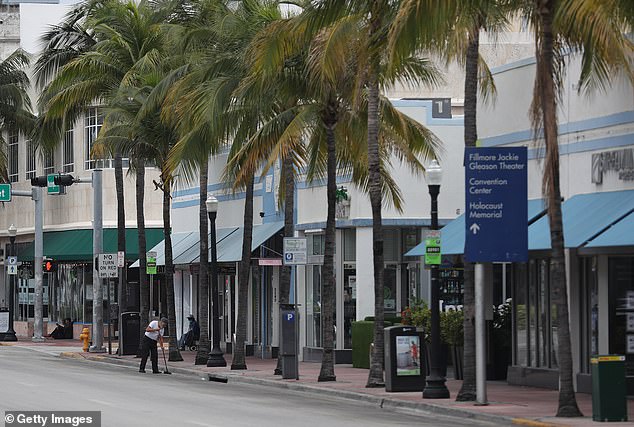 A person sweeps the street in front of businesses that are closed due to the coronavirus pandemic on May 10 in Miami Beach. The city will begin to reopen from Monday

In Washington state, restaurants are being directed to log all eat-in customers as part of phase two of the reopening plan.

The move is expected to help with contact tracing if a customer falls ill with coronavirus after dining with the business.

Restaurants will be required to log each person’s telephone number, email address and the time they ate, and the record must be maintained for 30 days, according to ABC News.

‘If you have somebody who has become sick and they were sitting right next to a person at a restaurant, to be able to identify that person could be very valuable for their health to try to save their life, and so we put that in place,’ Gov. Jay Inslee said Tuesday.

Restaurants in eight Washington counties which have been approved to enter phase two of the reopening phase must keep the log, as well as meeting a dozen other requirement to remain open.

Other requirements include operating at 50 percent capacity or below, seating no more than five guests at each table, providing hand sanitizer to employees and customers, placing tables at least six feet apart from each other, and providing single-use menus.

Each employee must also be tested for COVID-19 at the start of each shift, according to the governor. 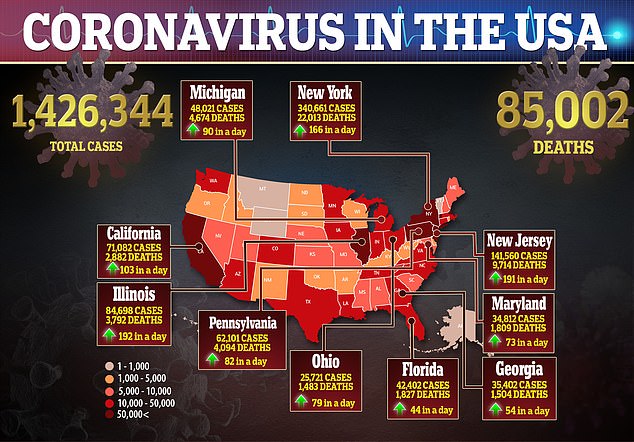 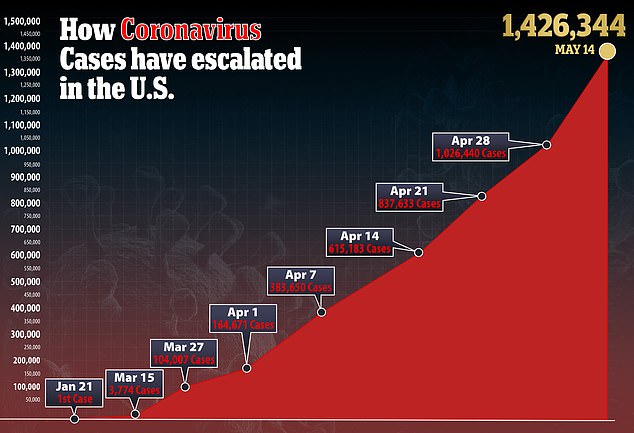 In New York City, however, restaurant and bar owners have panned the reopening plan proposed by Mayor Bill de Blasio.

As reported by Eater, the mayor mentioned potentially opening the city’s restaurants in three stages during a call with some the NYC’s top independent restaurants.

The staged approach would not result in a full reopening until after Labor Day.

No specific outline or days were given but Eater reported that it was implied restaurants would begin to open in a limited capacity as they are in other states.

Owners have voiced concerned that they will still incur heavy costs to open at limited capacity, making the reopening worthless.

‘We have the same costs to open at limited capacity and, truthfully, I don’t think the income would be worth it,’ Susan Povich of Red Hook Lobster Pound told the New York Post.

‘I am not going to open the inside of my restaurant at a 25 or 35 percent capacity. 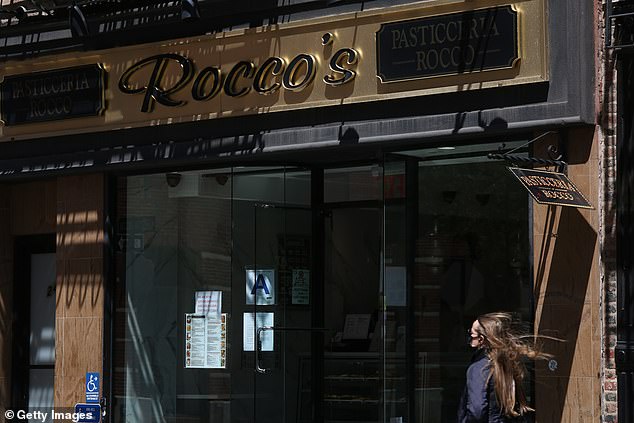 Pictured a restaurant remains closed in New York City on Tuesday. Bar and restaurant owners have panned Mayor Bill de Blasio’s suggestion that they begin to reopen at limited capacity 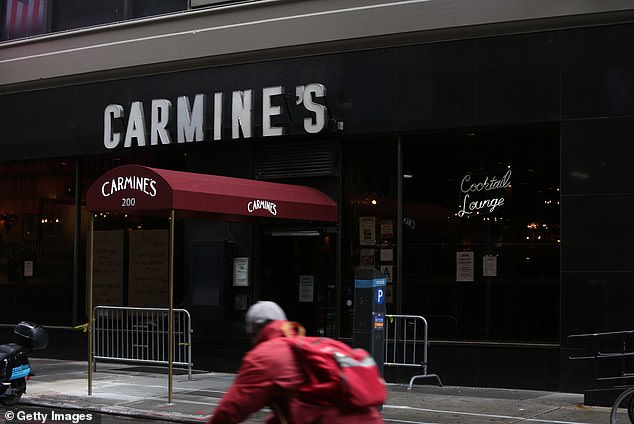 Carmine’s restaurant in NYC on Sunday which remains closed because of the coronavirus pandemic. Some bars and restaurants have suggested that it would not be work the cost to begin opening again in limited capacity and that social distancing could not be maintained

Her concern was echoed by Alex Ivanac Varela who runs Manhattan’s Villa Berulia.

‘From what I hear, we’re only going to be able to open at 25 percent capacity to start. For me that’s just not feasible or worthwhile,’ she said.

‘Payroll, rent, electricity, water; it all boils down to all these bills are going to add up once we’re open. We’ve been closed since March 16 and we’ve been able to cut some corners.’

Bar owners are also concerned that even with a more limited capacity, venues will be unable to keep customers at a suitable distance apart to maintain social distancing.

‘If you have to keep six feet apart in a bar, most bars in New York City aren’t that big,’ said Mitch Banchik, who owns city bars Down the Hatch and The Gin Mill.

‘One-hundred-and-fifty occupancy [is common] and they want you to decrease by 50 percent,’ said Banchik, showing off his cocktail-napkin arithmetic. ‘Seventy-five people trying to stand six feet apart. 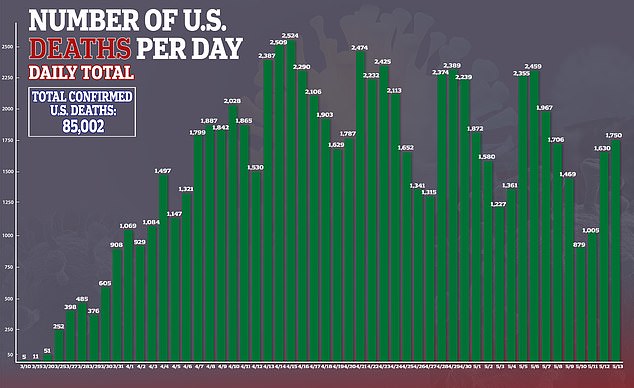 Others were concerned that reopening would lead to a second outbreak that would cause further closures.

‘To have to do this again before the year is over. Or ever again?

‘That’s the last thing we want.’

‘There’s a lot of concern that restaurants could open up their restaurant, hire people back, only to learn they don’t have the sales to sustain their business and lay people off again,’ added Andrew Rigie, head of the NYC Hospitality Alliance.

‘It was extremely difficult to survive operating a restaurant or nightlife venue pre-pandemic.’

‘Coming out of this crisis, it’s only going to be compounded, especially if you have to operate at reduced occupancy.