Michael Clarke and Jade Yarbrough had been trying to repair their relationship before a family dinner turned into a violent slanging match as its revealed the pair are ‘devastated’ in lieu of the public brawl.

The cricketer is said to swear ‘black and blue’ that he was spending time apart from the younger sister of Jasmine Yarbrough, the wife of TV star Karl Stefanovic, when he allegedly hooked up with his ex-girlfriend Pip Edwards on December 17.

Sources close to the pair told the Daily Telegraph said they had been on a break when Clarke is alleged to have spent time with his fashion designer ex.

However, Edwards was reportedly shocked when she saw photos of Clarke and Jade on a reunion holiday at the popular Queensland town just weeks later.

Days before the couple would trade obscenities in a wild brawl just metres from a posh Noosa restaurant, they had been trying to repair their relationship.

In lieu of the fiery screaming match, Yarbrough is said to be ‘distraught and embarrassed’ as she lays low in Brisbane while Clarke is ‘devastated’.

A source close to the cricket star says he is concerned about ‘the way Jade is being portrayed’ after footage of the melee did the rounds on social media.

‘He’s devastated that he’s put her in this position,’ the source said. 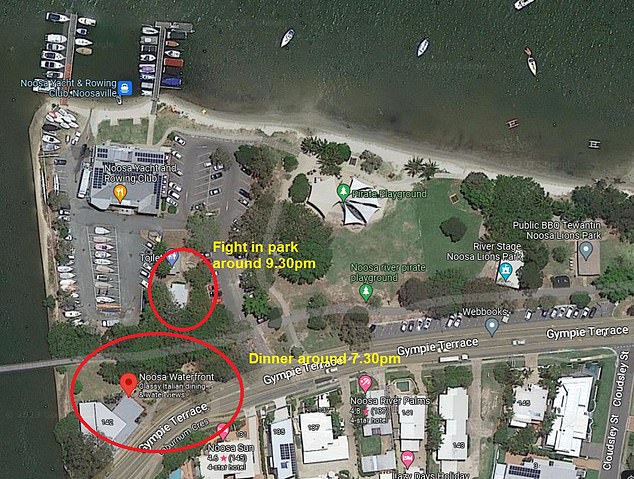 The couple had been staying with Anthony Bell, a multimillionaire accountant, in his $10million Noosaville mansion located just a stone’s throw away from the ocean.

On January 7, the couple hit the beach and appeared happy and relaxed as they exchanged jokes and poked fun at each other at the water’s edge.

It’s understood Yarbrough may have then exchanged text messages or spoken with Edwards after seeing a text on her boyfriend’s phone.

On January 8, cracks began to show with the couple pictured looking tense as they sat in lounge chairs in Bell’s mansion, with Clarke holding his girlfriend’s hand.

Tensions appeared high as a clearly upset-looking Yarbrough pushed the cricketer and commentator away as he followed her out of the spacious pool area. 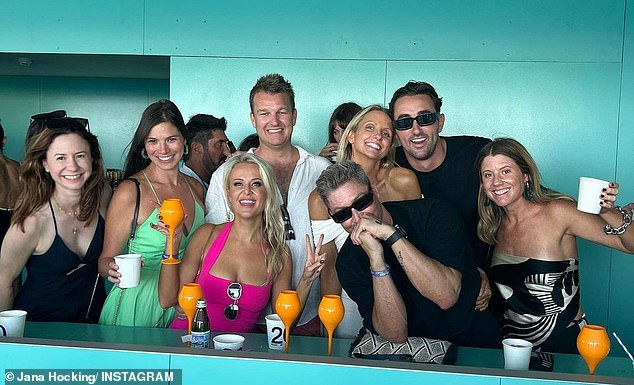 Michael Clarke, (second right at the front in black shirt) with New Year’s Day revellers at Bondi Icebergs which he had been expected to attend with Yarbrough, who was instead in Aspen 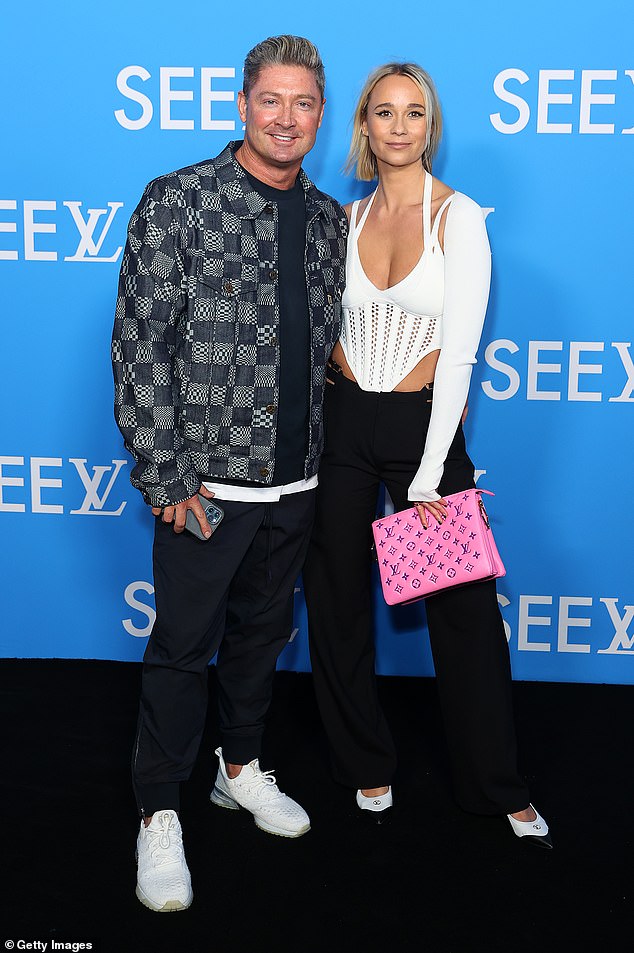 Tensions hit an all-time high on January 10, when the couple were joined by Jasmine, Stefanovic, and their host Bell at the Noosa Waterfront Restaurant & Bar.

Sources say the night escalated after the group had enjoyed a round of drinks.

‘They’d all only had one glass of wine, so this talk of a wild night is not true. They’d just got to the restaurant and sat down when it happened,’ a source has claimed.

At about 9.30pm, the fight broke out, reportedly about recent text messages between Clarke and Edwards, and the allegation he had cheated on Yarbrough with the fashion designer less than a month ago.

The dramatic footage shows a shirtless Clarke being screamed at and slapped by his hysterical girlfriend as others in the group try to defuse the fracas.

Clarke is seen limping in a park surrounded by a group who are trying to calm the situation, while a furious Yarbrough screams at him then slaps him across the face. 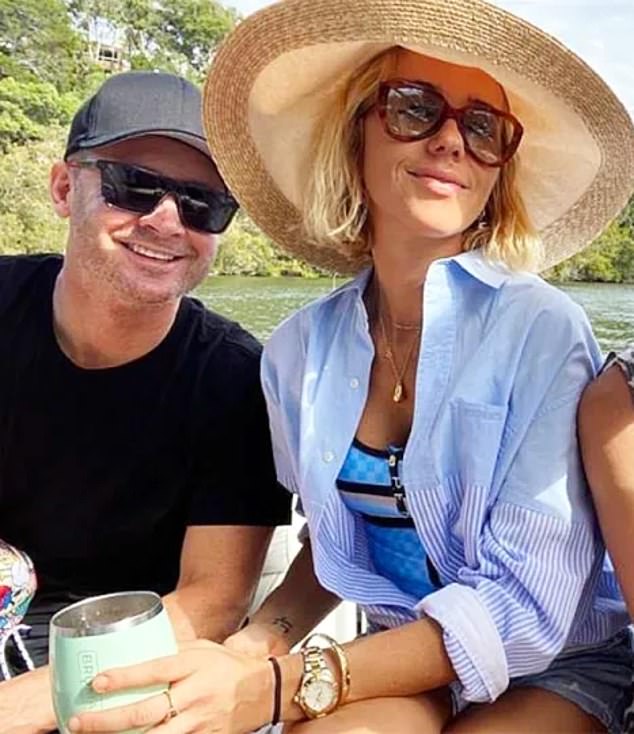 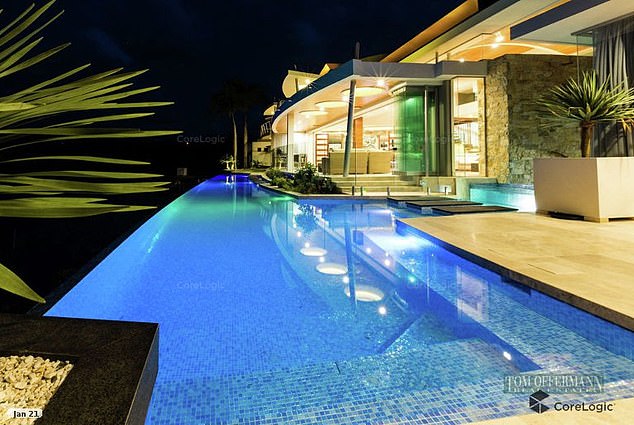 Jade and Michael stayed at the $10m mansion of celebrity accountant Anthony Bell (above) in Noosaville, which has a private sandy beach, 45m frontage and solar-heated infinity pool

The former cricketer, who reportedly injured a hamstring during the incident, can been seen struggling to keep up with Yarbrough as she walks around angrily.

Clarke tries to reassure his girlfriend that he didn’t cheat on her and swears on his young daughter’s life he was with Bell on the night in question last month.

But Yarbrough doesn’t believe his protests and claims she spoke to Pip. 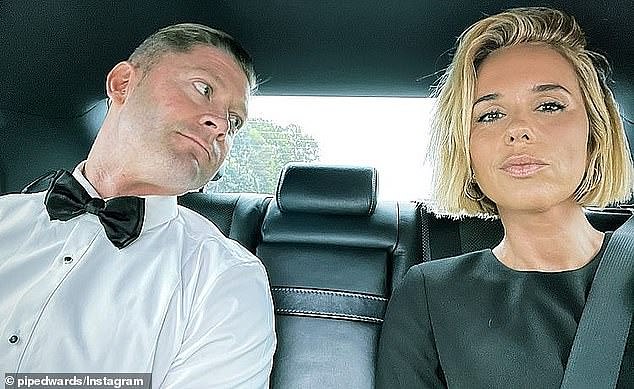 Edwards (pictured with Clarke) has distanced herself from the sage, saying ‘it’s not my circus’

Jasmine eventually steps in, grabs her distressed sister by the arm and takes her away as Clarke turns his attention on Stefanovic.

In a statement shared with the Daily Telegraph, Clarke said he was ‘absolutely gutted I’ve put people I hold in the highest regard in this position’.

‘My actions in the lead-up to this altercation were nothing short of shameful and regrettable,’ he continued.

‘I am shattered that because of my actions I’ve drawn women of class and integrity, and my mates, into this situation.

‘I own this fully and am the only one at fault.’

Edwards has distanced herself from the saga, saying ‘it’s not my circus’.

Ex-Australian cricket captain Michael Clarke was involved in a public fight with girlfriend Jade Yarbrough and TV host friend Karl Stefanovic – who is married to Jade’s sister Jasmine – after a night out with celebrity accountant Anthony Bell in Noosa on January 10.

This is how the spat unfolded: 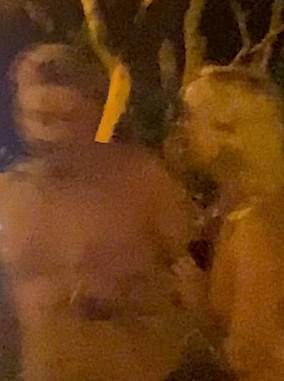 Jade: You told her… You f***king keep lying to me

Jade: You keep lying. You are a piece of s**t

Jade: I just spoke to her. What is wrong with you?

Jasmine: Get away with Karl, go with Karl 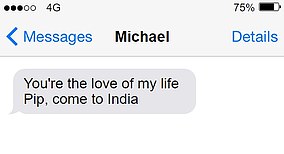 Clarke: Do it again, do it again. You’re wrong, you’re f***ing wrong

Clarke: No I didn’t

Jade: [Quoting a message] “You’re the love of my life Pip, come to India

Clarke: Don’t ever talk to me again