And Michael Douglas and Catherine Zeta-Jones continued to soak up the family time as they enjoyed a stroll in Mallorca, Spain, on Monday.

The actor, 76, looked relaxed as he hugged Carys, 18, and was fed some ice cream by his stunning wife, 51, during the outing.

Family time: Michael Douglas looked relaxed as he hugged his daughter Carys, 18, during a family stroll around Mallorca on Monday

Michael cut a casual figure in a grey long-sleeved top styled with denim jeans and a baseball cap.

He completed his ensemble with a pair of sunglasses and donned a white face mask while walking along the streets of Palma de Mallorca.

Catherine also looked sensational in semi-sheer blouse covered in a floral pattern and styled with white trousers and trainers.

The Welsh beauty appeared to be in great spirits as she tucked into a sweet treat and fed a little of the ice cream to her husband of 21 years. 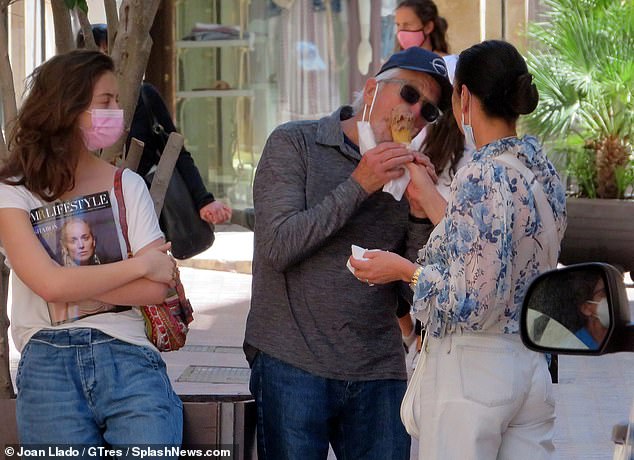 Sharing: The actor, 76, was fed some ice cream by his stunning wife, 51, during the outing

The doting parents were joined by both of their children in Mallorca, with Carys looking effortlessly stylish in jeans and a white T-shirt.

She wore her brunette locks down, letting them cascade over her shoulders, and clutched a fashion magazine as she waited for her parents to finish their snack.

While her brother Dylan, 20, opted for some camouflage trousers and a grey tee with a large lightening bolt on the front as he stepped out for the family outing. 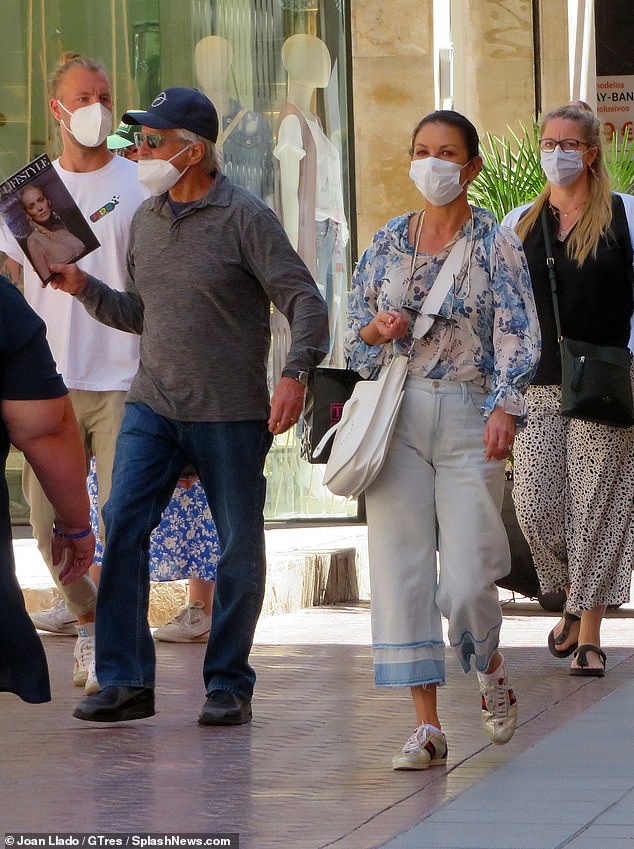 Casual: Michael opted for jeans and a long-sleeved grey top while Catherine looked effortlessly chic in a semi-sheer floral blouse 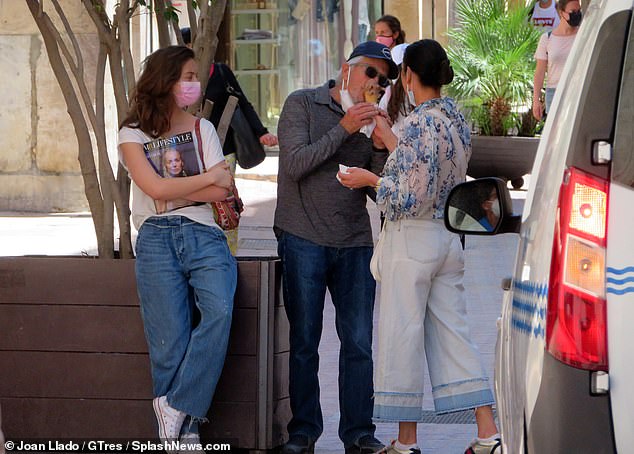 Waiting around: Carys patiently waited for her parents to finish their sweet treat 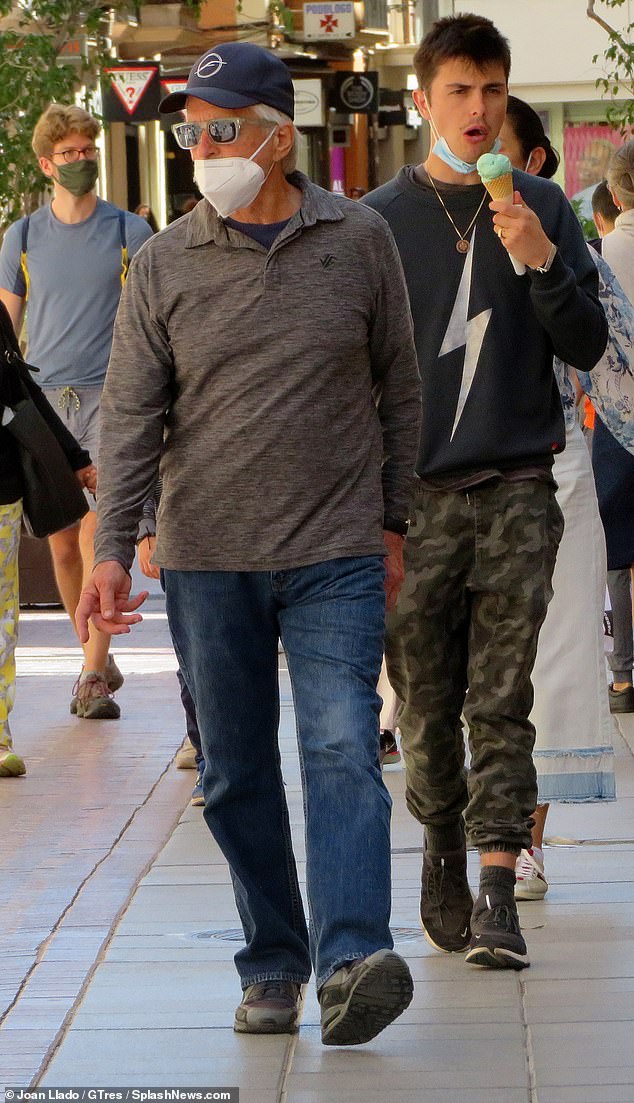 The family stroll comes after Catherine and Michael proudly posed with Carys at her high school graduation last week.

The 18-year-old was also joined on her big day by her brother Dylan, who is currently a college student at Brown University.

In one snap that Michael posted to his Instagram page Dylan was seen affectionately picking up his little sister as she held her diploma.

‘Congratulations to Carys and the entire class of 2021! Your Mom and I are so proud of you!’ gushed the son of Kirk Douglas in his caption. 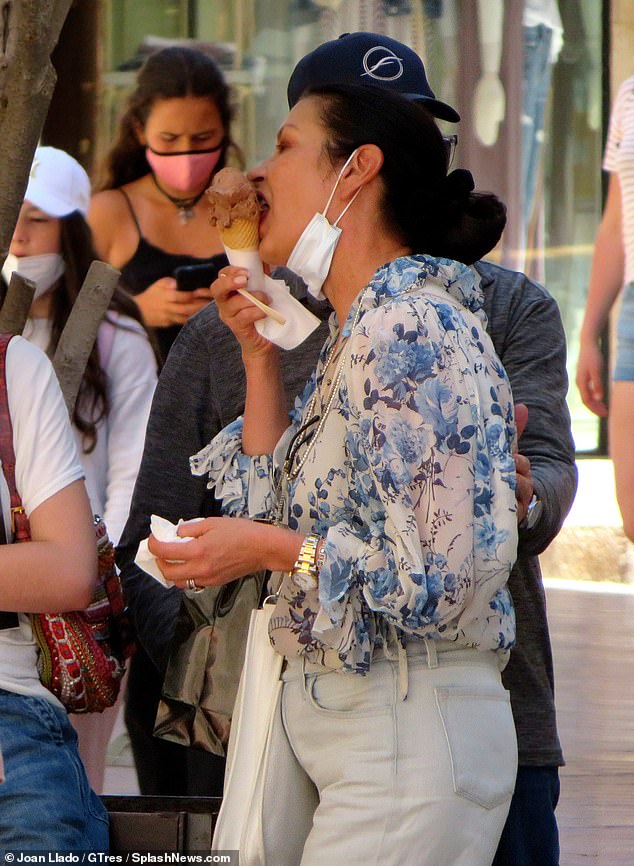 Tucking in: Catherine also seeming rather pleased with her snack 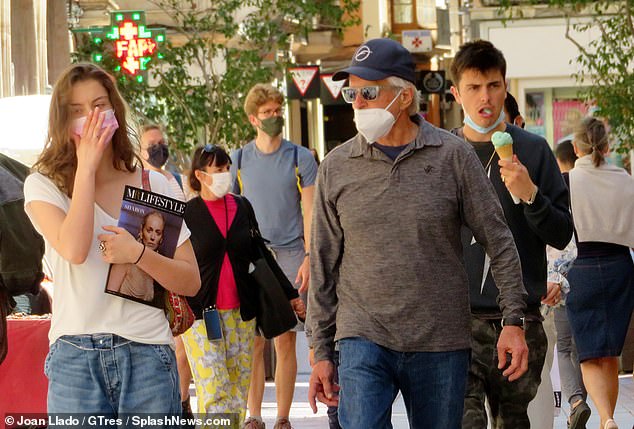 Laid-back: Carys looking stylish in jeans and a white T-shirt paired with a pink face mask 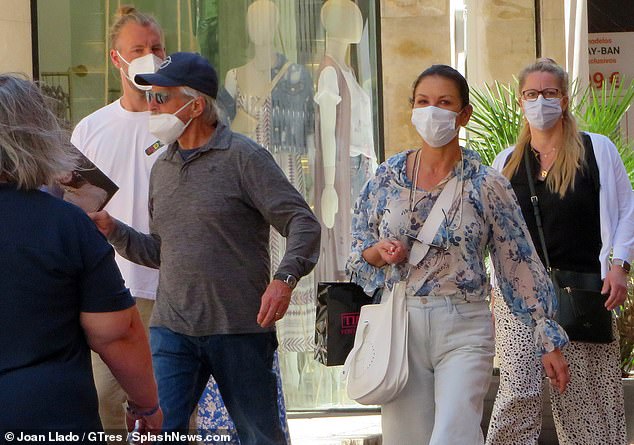 Off they go: Catherine accessorised with a white Hermes handbag and a face mask

The Basic Instinct star, who at 76 is a quarter-century older than his wife, wrote: ‘We love you so much and we are so excited for your future as the best is yet to come!’

Michael revealed in a 2019 interview with Closer Weekly that his daughter had decided to start attending boarding school.

The previous year she told Town And Country that when her father would do the school run ‘People would be like: “Your grandpa’s here to pick you up.”‘ 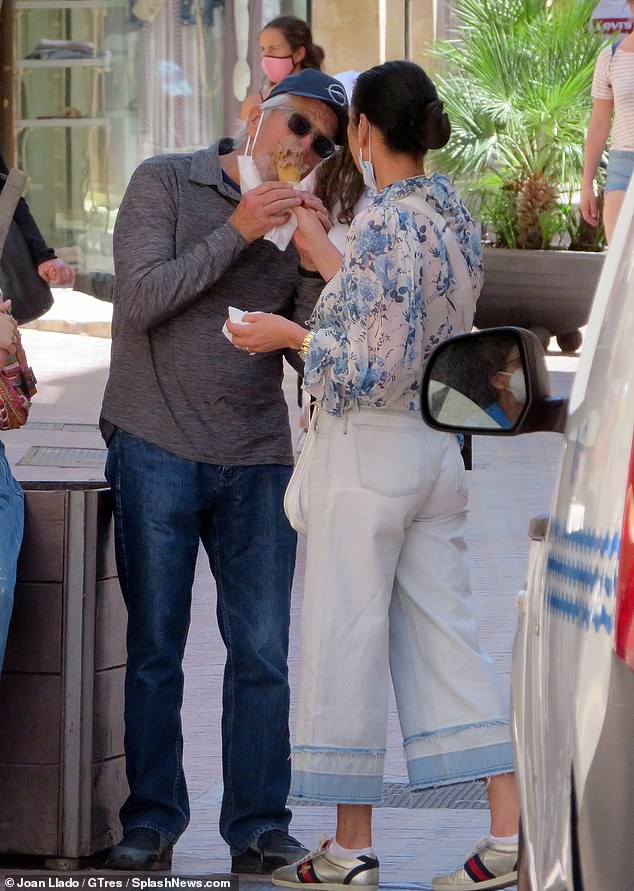 Sweet: Michael held onto the ice cream cone for a little extra support while helping himself to a little of Catherine’s snack 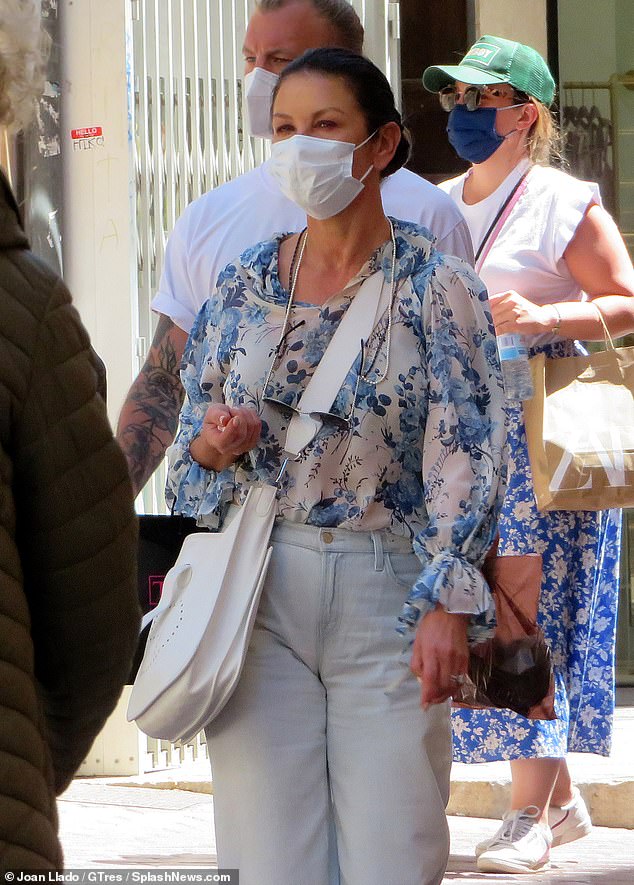 Looking good: Catherine appeared relaxed as she soaked up the sights and sounds of the city

When Carys celebrated her 18th birthday last month Catherine wrote on Instagram: ‘You are everything, and everything is you. Thank you for the joy you bring me.’

Catherine then joked: ‘Wait……….. Oscar?…….. No……… Definitely YOU!’ and added two crying laughing emoji at the end.

She won her Oscar in 2002 for her supporting role in Chicago – and during both the film shoot and the awards show she was pregnant with Carys. 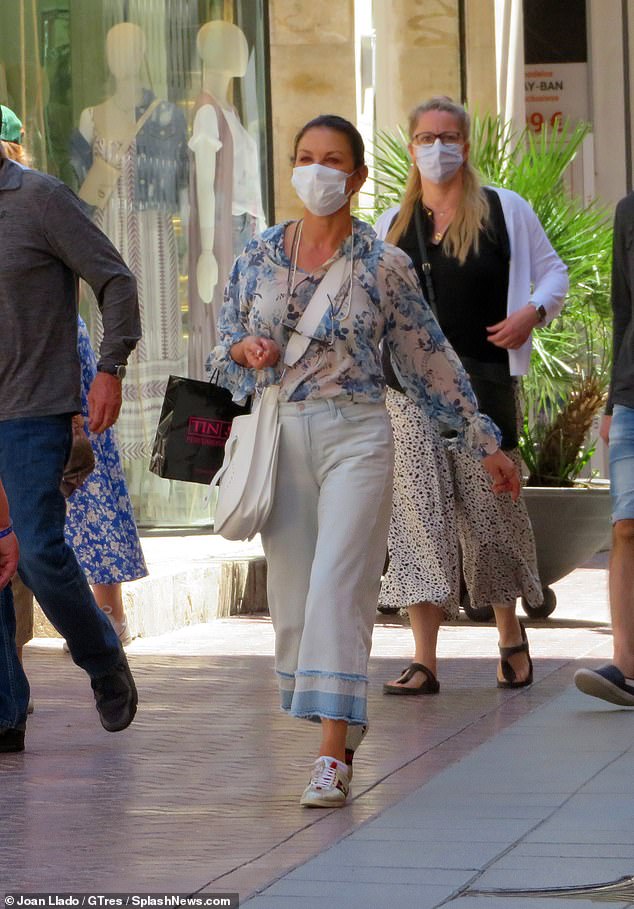 Accessories: She completed her look with a designer handbag, sunglasses and Gucci trainers 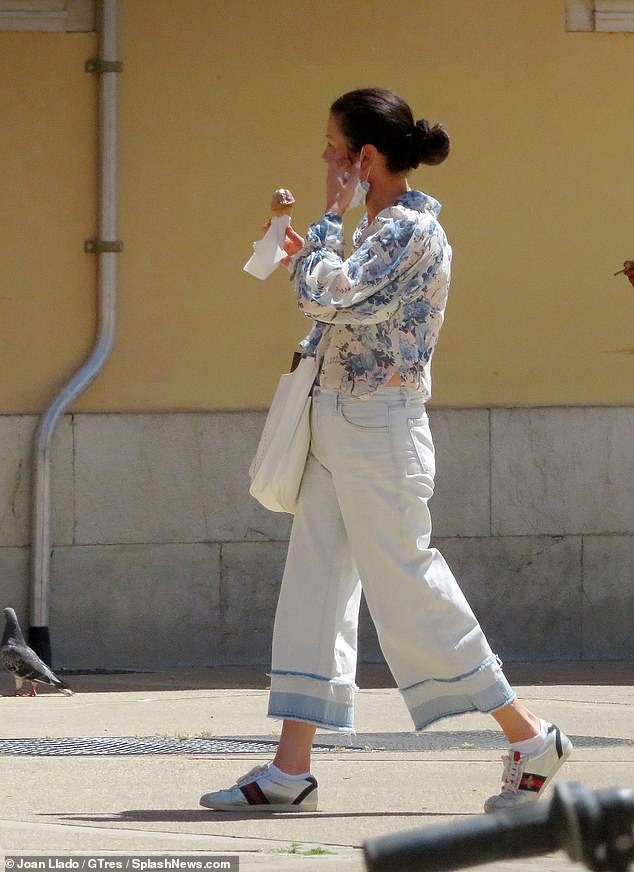 Relaxed: The actress slicked her brunette locks back into a neat bun 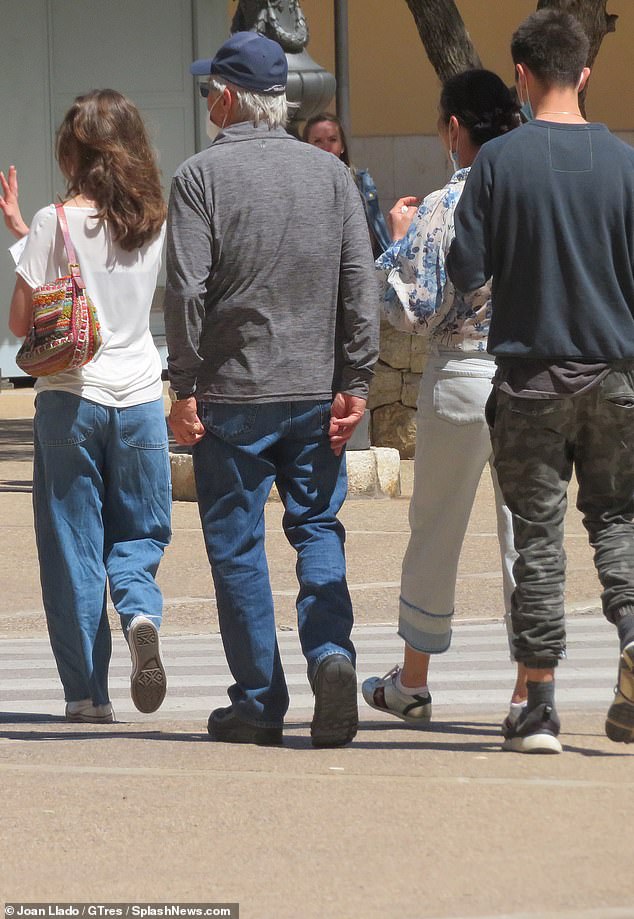 Trip: The family’s outing in Mallorca comes after they celebrated Carys’ graduation

While in a recent Today show interview Catherine gushed that her ‘extremely bright’ children both want to follow their parents into the acting business.

‘Michael and I would be the first parents to say: “You know, maybe you should think of another career,” but we’ve seen how passionate they are about the craft,’ she said.

Catherine and Michael welcomed Dylan in August 2000 and married at the iconic Plaza Hotel on 5th Avenue that November.

Carys, whom Catherine was heavily pregnant with when she danced at the Oscars and accepted her trophy for Chicago, arrived in April 2003. 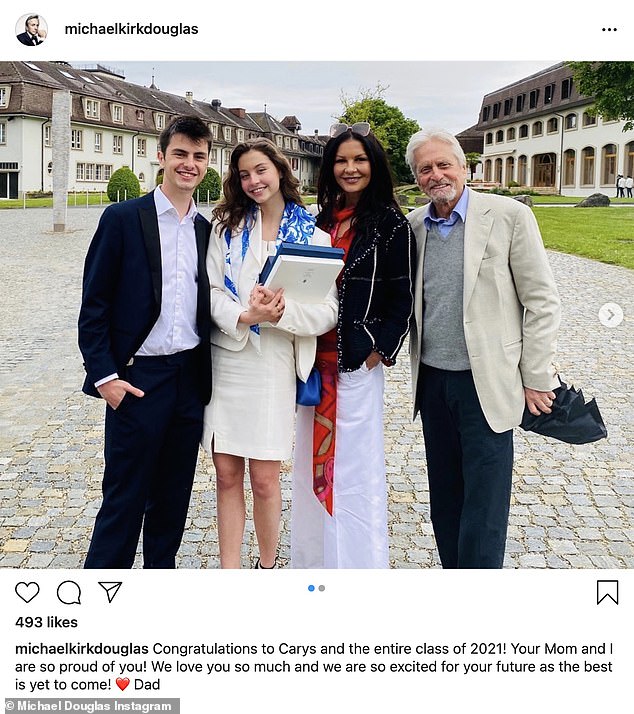 Big day: Catherine and Michael proudly posed with their daughter Carys at her high school graduation last week and she was joined by her brother Dylan 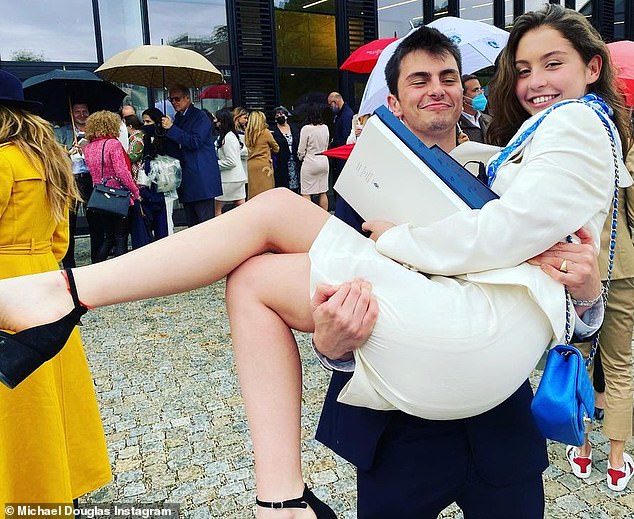 Goofing about: In one snap that Michael posted to his Instagram page Dylan was seen affectionately picking up his little sister as she held her diploma