Fremantle’s Michael Frederick pulled off the most incredible assist of the season as the Dockers ended Melbourne’s 17-match winning streak and sent a huge statement to the rest of the AFL with a come-from-behind win at the MCG.

With a minute left in the third quarter on Saturday night, Frederick gathered a loose pass from Michael Walters about 10 metres out the goal square under pressure from a defender and batted it backwards to Lachie Schultz without looking.

‘That was a backhand Roger Federer would be happy with!’ said an incredulous Garry Lyon in commentary.

His co-callers could hardly believe it either, labelling the freakish display the touch of the season and the assist of the season. 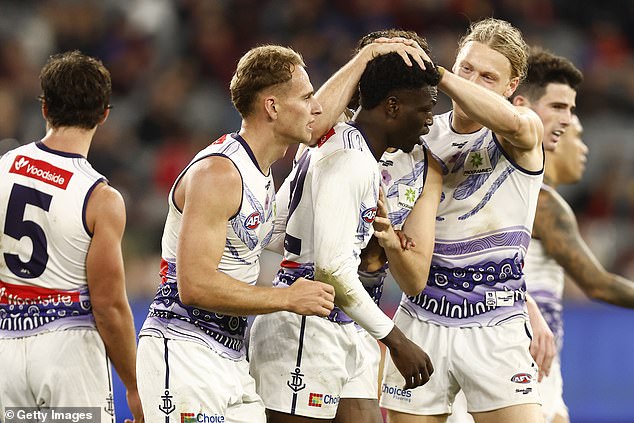 Fremantle reeled in a five-goal deficit to pull off the momentous and confidence-boosting 38-point upset win.

The Demons were cruising towards an 11-0 start in 2022 after leading by 30 points late in the second quarter before Fremantle slammed through the last 10 goals of Saturday’s match to make an almighty statement.

The Dockers, who were coming off disappointing defeats to Gold Coast and Collingwood, produced an eight-goal third-quarter burst to stun the reigning premiers.

It was Melbourne’s first defeat since losing to the Western Bulldogs in round 19 last year. 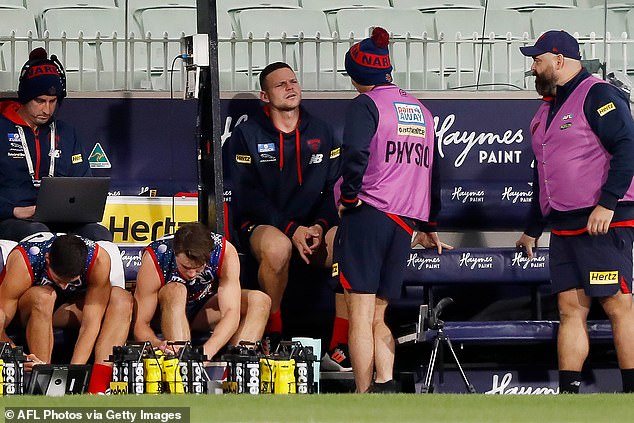 The loss of Steven May (centre) after a sickening hit from teammate Jake Lever hurt Melbourne badly, but it was far from the only reason they got dismantled by the Dockers 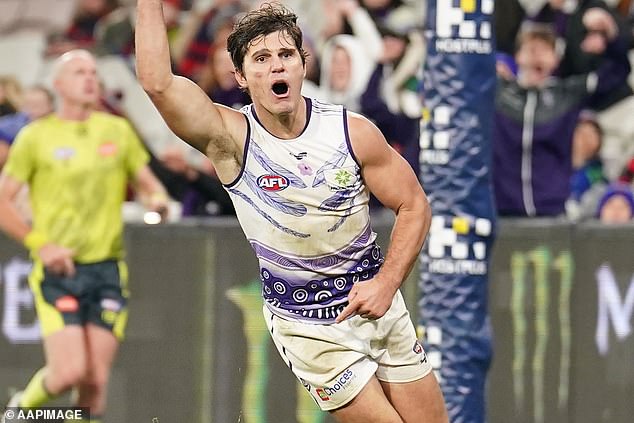 Melbourne were rocked by the early loss of superstar defender Steven May, who was subbed out at quarter-time following a friendly fire collision with fellow premiership backman Jake Lever.

In a major blow for the Demons, May will miss next week’s clash with the Sydney Swans under the AFL’s concussion protocols.

But Melbourne’s downfall and Fremantle’s revival did not solely stem from May’s absence as the Dockers ran riot around the clearances to embarrass the Demons’ all-star midfield unit.

The Demons’ defensive structure was undoubtedly rocked without May but Andrew Brayshaw, Will Brodie, Caleb Serong and Sean Darcy set up the comeback out of the middle.

Brownlow Medal favourite Clayton Oliver had 24 possessions by halftime but was kept quiet after the main break as the Dockers reigned supreme. 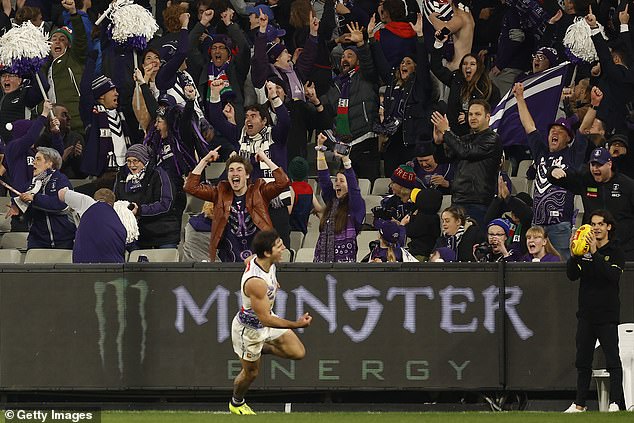 Oft-maligned ruck-forward Rory Lobb kept the Dockers in the contest early, booting two of Fremantle’s first three goals and asserting himself around the ground.

Lachie Schultz finished with a game-high four goals, Lobb kicked three, while the exciting Michael Frederick booted two and had an influential role in setting up many others, including a classy tap-on late in the third term.

The performance confirms Fremantle (8-3) as a genuine premiership contender, adding to the rare win they secured in Geelong in round seven.

The only downside for the Dockers was important forward Matt Taberner being subbed off in the final term for Bailey Banfield.

Fremantle face another huge challenge next Sunday when they host second-placed Brisbane at Optus Stadium.